The Auris Audio Euterpe is the company’s latest desktop tube amp featuring a headphone, DAC/Preamp capability, and a unique enclosure that duals as a headphone stand. It retails for €1,499.00.

Disclaimer: The Auris Audio Euterpe was sent to us in exchange for our honest opinion in this review. Many thanks to Auris Audio for giving us this opportunity.

You can read more about previous Auris Audio products reviewed or referenced on Headfonics here.

This is our second tube amp from Auris Audio in for review in the last two years. The previous occasion was their majestic HA-2SE which is now my main workhorse for pretty much all reference tube amp synergy pairings and casual listening when I want something a little different to solid-state.

The HA-2SE also won the Best Desktop Tube Amp Award for 2018 so no pressure there then for the new product, the Euterpe. Mind you its launch price of €1,499.00 is somewhat lower than the HA-2SE’s €2,070.00 but do not let the numbers fool you as there is plenty going on with the Euterpe.

I actually spent quite some time on the Euterpe at CanJam Singapore last March with Mladen the Sales Manager of Auris. Most of the testing was with the Meze Empyrean but honestly, the din was so much I could not get a solid impression so thankfully we can duplicate that set up here in the office.

It can act as an all-in-one desktop amplifier and DAC, a pure DAC (with modern source OTG input capability), a pre-amp, and a pure tube headphone amplifier. The one additional function, that I did not include in the original 4 as its more outside than inside, is the ability for it to also act as a headphone stand.

The DAC inside has some baseline specs including a decoding capability of up to DSD128, PCM max 32bit/384kHz with an XMOS USB stage for digital audio input. We do know the DAC inside is a Sabre DAC so my presumption is that it is an ES9018 PRO and the DSD128 limit comes from the XMOS implementation. 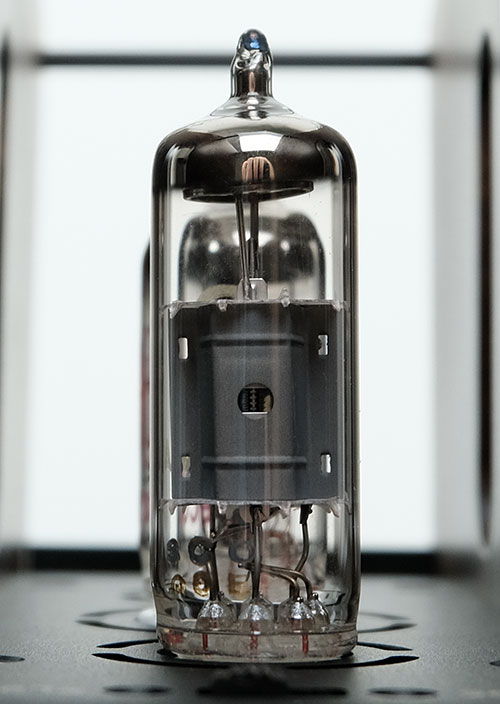 The lineup of tubes is classic Auris with the use of 2 7-pin Ei PL95s, which are the equivalent to 6DL5’s and a single ECC81 input tube, otherwise known as a 12AT7 running in Ultra-Linear mode. The ECC81 supplied stock tube is JJ Electronics branded version.

The output power is quite similar to the HA-2SE or just a shade lower at 0.9W into a 32Ω load. That places at a moderate power level and should have no issues with all but the most demanding of headphones.

To assist you with ensuring you get the most out of various headphones Auris has also implemented a similar impedance matching system as the HA-2SE. It is not quite as expansive with just two settings instead of four but the two settings are fairly comprehensive at 32-80 Ohm / High > 150 Ohm

The Euterpe power supply is a good one also. This is an external regulated linear power supply with a switchable 115 / 230 VAC capably output and will keep noise to a minimum (at least with our initial impressions). It uses a fairly stiff but sturdy 4-pin connector 1m cable so you can place the 2 units pretty far apart.

The box is huge, too big for some nice pics, but an attractive huge by most courier standards. This is a massive white cardboard box with plenty of foam lining separating the amp from the linear power supply. The tubes are already preinstalled so there is no additional cubby hole to protect them. The amp’s design already does a good job of keeping them safe from knocks.

You will not find too much in the way of accessories outside of the linear power supply. However, there is a small manual on how to piece everything together for the various inputs and outputs. You do not get an additional USB cable or a power chord for the PSU, you will have to supply those yourself.

It should not cost too much though. I bought a fairly decent kettle type 3-prong power cable for $3 at the local hardware store today for that very purpose.

Attractive, unusual and with function as well as form. This is a tall and quite beautiful design with a mix of aluminum and walnut wood housed on a steady rubber footed metal plinth.

It really stands out for how unique it looks but I am sure Auris will want to give some credit to Valentin, the CEO of Kennerton for the original inspiration behind some of the design with their Atlas amp design. The name Euterpe is somewhat relevant here being one of the nine muses of Greek mythology and the Goddess of music.

The actual shape is intended to be in the form of a harp or lyre though Euterpe historically is more associated with a double flute. I believe it is Erato, another muse who is known to have a lyre in her hand in many classical depictions.

I am digressing though. Suffice to say the wood finish surrounding the much smaller aluminum amp is distinctive and yet on top, you will find a bit of useful function with a small curve in the middle.

This curve is designed to also act as a headphone stand and yes, it will take a full-size headphone and no, it won’t heat up and burn your precious cans. I left the Empyrean on it for 4-5 hours the first night and apart from some mild warmth on the strap, there were no side effects.

The tubes are aligned centrally at the top of the matte black aluminum housing with good separation between the top and sides of the wooden enclosure. They seem well protected from bumps, knocks and accidental finger touching. 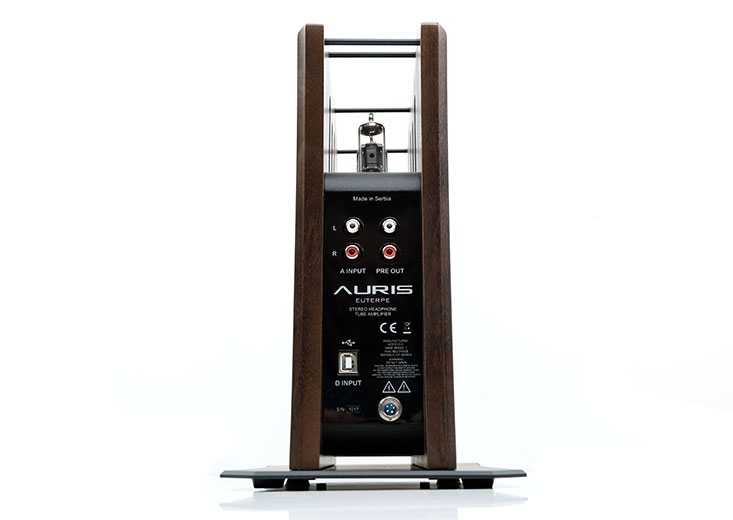 Controls and volume are to the front along with a single-ended 6.35mm jack output and to the rear, pre-amp, USB digital audio input, and analog Dual RCA inputs. The PSU is also connected to the rear with a 4-pin socket towards the base of the amp. There is no balanced amplification inside the Euterpe design.

The volume pot also doubles up as a power-on resistance-based switch and you will have to wait a few seconds after turning it on for it to activate. A small safety precaution if you will. There is no stepped attenuation design to the pot here, this is a custom Alps potentiometer design with a very smooth turn. Also, thank you so very much Auris for putting in some white markers to judge volume levels accurately.

The level of potential functionality of the Euterpe seems excellent though our primary review focus will be on the built-in DAC and amp all-in-one performance. That being said, the pre-amp and analog inputs as a pure amp combined with a higher-end DAC such as the Qutest and even an M-Scaler behind that will be intriguing to see just how good the SET amp inside really is. 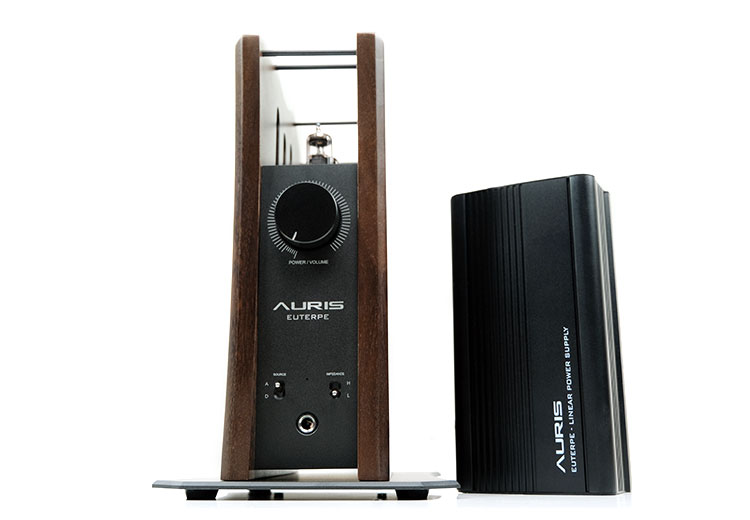 First the noise levels. Whilst not as dead quiet as the impressive HA-2SE it is impressively low for a SET amp. It is only when you throw on some sensitive IEMs (Campfire Audio Polaris 2), do you pick up on any hiss and even then, it is acceptably low with a slight left channel imbalance at really low volume levels.

Otherwise, with planar headphones of medium efficiency such as the Meze Empyrean, you will not hear a drop of hiss, crackle or traditional tube pop. This is something I have come to expect with Auris amps from and the Euterpe really lives up to the expectation here.

Second, the DAC/Amp tuning. Now this seems fairly sweet in tone but not overly warmed up and not quite as rich in its timbre as the HA-2SE. I suspect much of that has to do with the ES9018 DAC implementation which has a traditionally clean to somewhat bright overtone on resistor amps. You will not find anything bright with the Euterpe but it does sound somewhat neutral in the presentation compared to the HA-2SE with the Meze Empyrean as our initial impressions headphone test pairing.

We wanted to confirm that so I switched to the analog input stage with the Qutest/M Scaler behind and there was a palatable jump in dynamic range and clarity from this high-end DAC setup. The ES9018 seems to do a solid job with instrumental separation, air and delivers some excellent detail. However, oh my! The Euterpe amp stage really seems it can go that bit further with a high-end DAC setup if you have it. The fact you are not limited to the internal DAC should prove a fairly useful feature.

I have had this amp for about 9-10 days now and so far it is showing a lot of potentials, particularly with a high-end pure DAC feeding a line-out and the Euterpe in pure amp mode. The internal Sabre DAC implementation is none too shabby either though it will give you a slightly more neutral performance.

Having said that any concerns about the Sabre glare being present you can put to bed right away. The Euterpe tone is sweet with zero treble harshness and a very black background in all but the most sensitive of IEMs thus far in my testing.

For our main review, we will push that power and synergy equation a bit further and just see how much more of a tweak we can apply with some other DACs connected as well as testing the pre-amp capability which the HA-2SE does not have. Stay Tuned!