The Lime Ears Aether R is a fresh perspective on the critically acclaimed original Aether custom monitor. It is priced starting from €1,200.00.

Disclaimer: The Lime Ears Aether R sent to us is a custom sample in exchange for our honest opinion. We thank the team at Lime Ears for giving us this opportunity.

Surprisingly, we never actually reviewed the original Aether when it came out about 3-4 years ago. When we first engaged with Lime Ears in 2017 they had moved onto what was then called “Project X” at the CanJam Singapore Show in 2017.

That being said, the 5-BA driver Aether is still mightily respected in most portable audiophile circles and has a big following with most describing it a warm to natural sounding monitor with excellent levels of detail and a spacious soundstage.

Now, in 2019, we have the Aether R which Lime Ears describe as retaining all the hallmarks of the original Aether but with some more refinement on the low-end compared to the original. Ideally, you should also hear a little more space and texture in the notes to help bring out more ‘character’ in the Aether’s vocal and instrumental timbre.

The R stands for revised, the price begins at €1,200.00 and instead of 5 drivers, we go to 6 balanced armature inside the new Aether R. Not that increasing the driver count is a sure-fire recipe for success but if the implementation is right you do have more potential. It is this potential that Lime Ears are tapping into combined with the new technology they have been developing on their Model X 4-driver variant.

What new technology? Well, apart from their excellent bass switch from the Aether first gen, there is now the use of their VariBore and TrueSub technology plucked from their recent Model X line.

The concept of a switchable sound is nothing new to me in my reviewing capacity. The likes of  M-Fidelity, Lear, and Vision Ears have all rolled out switch boxes of varying complexity. Lime Ears have been at the forefont of switching technology now for years also with the original Aether and Model X. The effect of the tuning varies a lot though from company to company.

I wasn’t a huge fan of the Cypher Labs Austru bass switch back in our review in early 2017. It felt too subtle to capture my attention unless I had the perfect setup. The M-Fidelity SA-43 dual switch system from our 2015 review was, and still is, fantastic with its mids-presence and bass mixing flavors. You can hear a difference on that one.

Crudely speaking, this is a refinement of how loud one frequency is compared to another in mathematical terms so that the listener perceives the sound to be balanced rather than skewed to one frequency being louder than another. 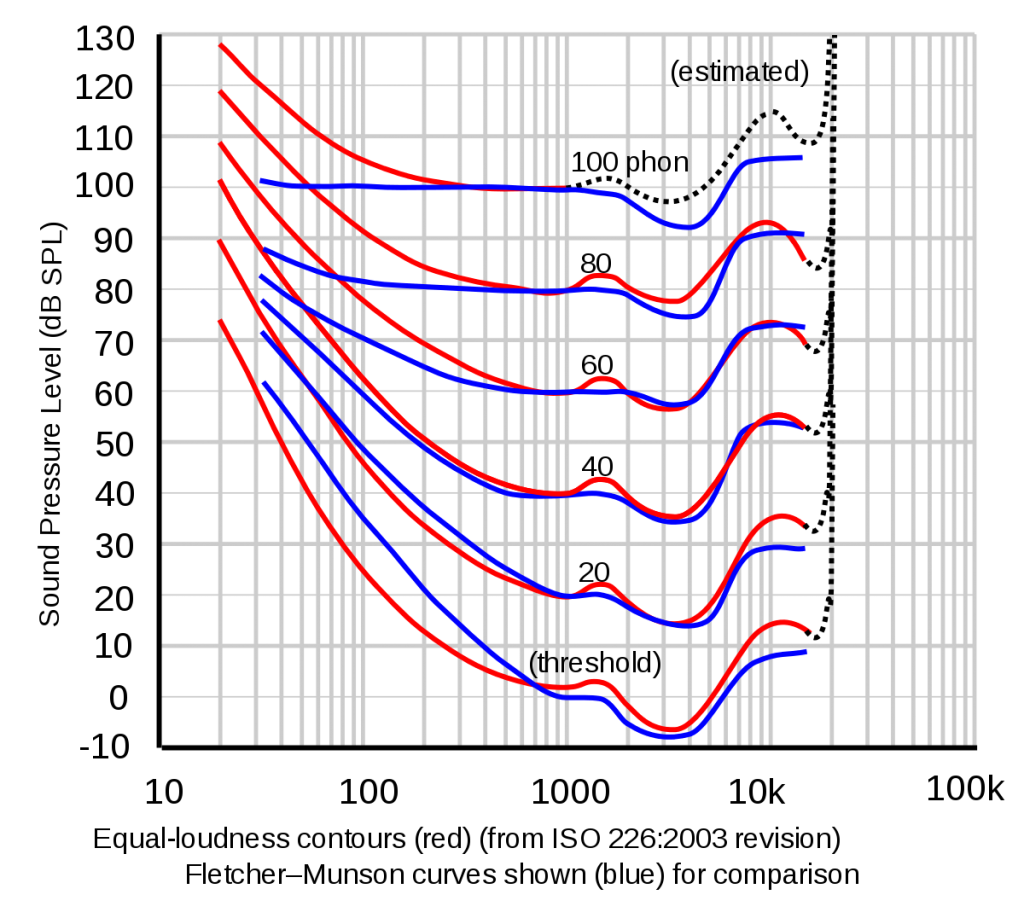 The Aether R switching system focuses on shaping the low-end response in accordance with the FML. In their previous Model X notes, they state specifically the sub-bass to lower midrange approx. (everything lower than 800Hz) by up to 8dB. We would expect roughly the same on the Aether R.

In doing so, the Aether R is pitched as having a flexible but balanced sound to either ramp up the low-end response or further refine the mid-to-high focus depending on your preferences.

The pitch with VariBore is variable bore sizing for groups of BA or frequencies delivery. Each bore has a different width, so you have 1mm for the low end, 2mm for the mid and high end. Different bore sizing will affect the type of signal produced with larger openings lowering the level of resonance and tighter openings enhancing the low-end presence.

TrueSub is the process by which Lime Ears shape and tune their sound bores using custom-designed 3D printed filters to ensure that the resulting audio response, particularly the sub-woofer frequencies from the drivers is as “correct” as possible.

Reflections and resonance control is at the heart of design in much the same way acoustical treatment of a room controls how sound bounces and reflects. Call it a legacy of Lime Ears acoustic engineering background. 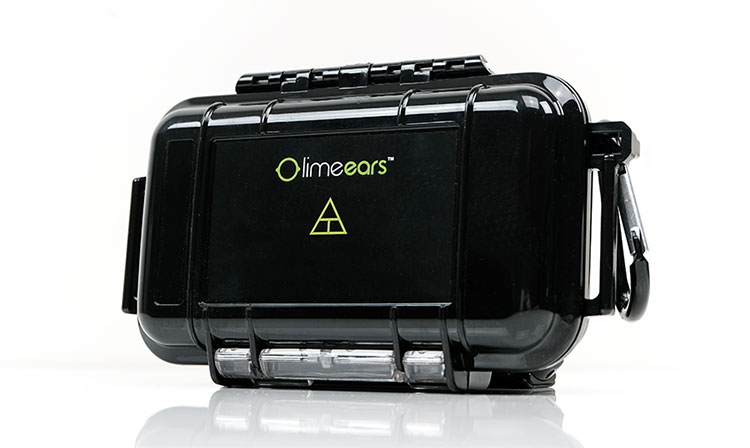 Well, it is a bit old school but it does the job would be my opening impression of the retail packaging for the Aether R. This is Lime Ears branded weather sealed Pelican Case 1015 with some decent contoured internal shock-absorbent rubber to the top, bottom and sides. You will have plenty of room for the custom units plus a few cables of choice though, the case is fairly spacious. 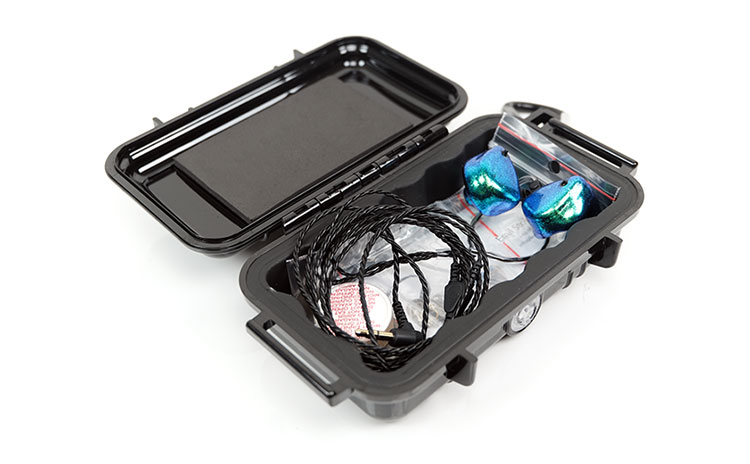 Includes accessories inside are as follows:

You do get some additional customization on the front of the case with your name and serial number but on our picture, we erased it for privacy reasons. 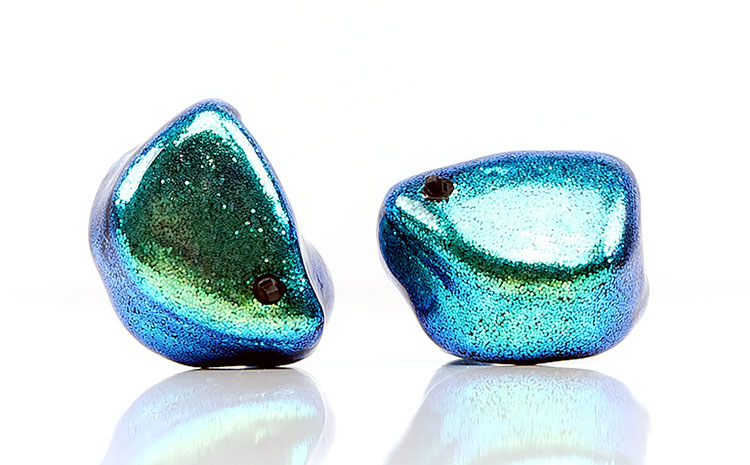 Of course, this being a custom monitor you may not necessarily choose this particular design in the picture. Lime Ears have tons of variations that might suit your tastes more and we will go through them all in the main review.

The design is very unique to my eyes and the closer you look at it the more revealing it becomes in terms of minute detail. Lime Ears have used a specially processed opalizing glitter over a hollow-body acrylic shell and faceplate to build a continuous design form with very subtle color shades.

The dominant color from the pics would seem to be a few varieties of blue interrupted by the pure black bass switch on the front faceplate but I can tell you this. Whichever way you move it, when it catches the light you will see the green turn to blue. It is an awesome two-tone design which Lime Ears call ‘Scarabaeus’. 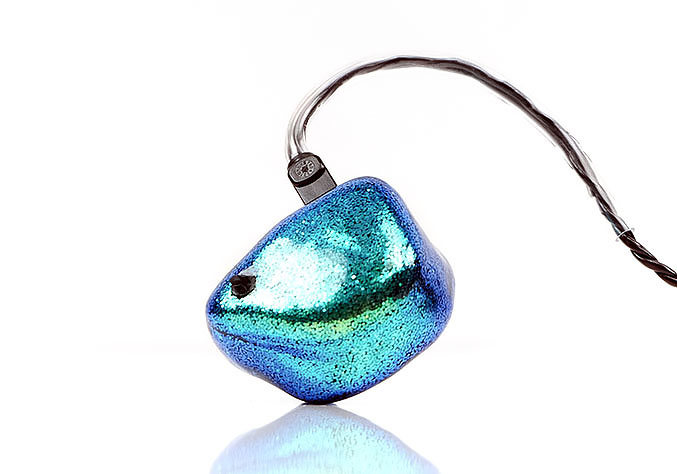 The stock cable seems like a typical 4-wire OFC Plastics One type unbalanced build. It’s 1.2mm in length, low microphonics, light and pliant. There is some memory hook material near the 2-pin connectors that is easy enough to bend and shape for wearing over your ear.

That being said, cable rollers should enjoy working with the Aether R. The stock cable does contribute a lot to that relaxed natural but warm sound but compared to less resistive cables the stock option leaves the presentation a little more compressed that I would prefer.

Of course, a new aftermarket cable is more costs but something like the Ares II from Effect Audio or the $125 BTG-Audio Starlight cable which we are reviewing now does bring some nice results for not too many more dollars.

Initial impressions are of a top-notch seal with an accurate fit but one which focuses a little more on how stage-artists like it. That means that fantastic seal comes from a touch more ear canal pressure than some of the more relaxed fittings I have had.

It seems to be one of those things. You want an amazing seal and excellent isolation you get this type of fit. You want something purely for comfort then you lose a little bit of seal or add huge length to the end nozzle and seal a bit deeper.

Physically I do not feel the Aether R stick out of my ear too much and the bass switch is positioned to the base which makes it easy to use without interfering too much with the driver shells and creating unnecessary noise or breaking the seal. 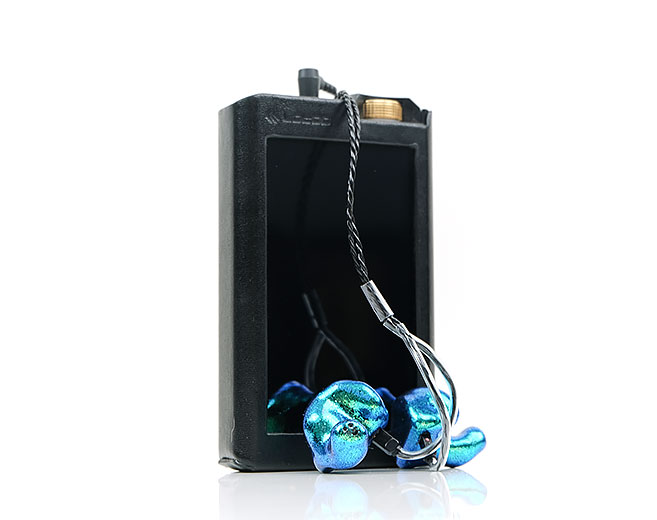 (Tested with iBasso DX220/AMp 1 MKII, Sony 1Z, and Lotoo PAW Touch Gold – The Aether R does need a little bit more volume than most but still relatively easy to drive on these DAPs).

Well, compared to the Model X the Aether R seems a lot more linear but still with just enough low-end warmth to keep the timbre from sounding cold or analytical. This is also nowhere near a V-shaped response, possibly closer to u-shaped with some gentle nudging in the mids and very and clear coherent top-end signature.

I would still initially class the sound as slightly to the musical side in the sense it sounds quite forgiving without any obvious harsh peaks or sucked out mids.  However, it clearly more technically adept than the Model X for detail and imaging.

I love the layering on the low-end particularly. It is not an aggressive thumping in your face response, there is some spaciousness there but still able to project a nice sense of power and depth to its signature. Vocals are positioned a bit more neutrally to my ears but sound like they have decent space to breathe and enough of a nudge to sound clear, even on stock cable. Treble is clean but not overly exaggerated instead opting for more body and a slightly wet attack to deliver a fairly natural sound.

The bass switch on and off does not sound as pronounced as the Model X to my ears, perhaps a little more nuanced and not quite as much dB difference. That sounds fine to me right now as its a tuning I would use far more often than the thunderous Model X version for adding a little more power and sub-bass physicality to rock and snyth wave tracks.

The switch, as per the Fletcher-Munson principle also adds a little more mids and vocal presence dB as far as I can tell. Turned off, vocals fall back a bit to the aforementioned neutral positioning, but with it on it gets a little closer and more intimate sounding. 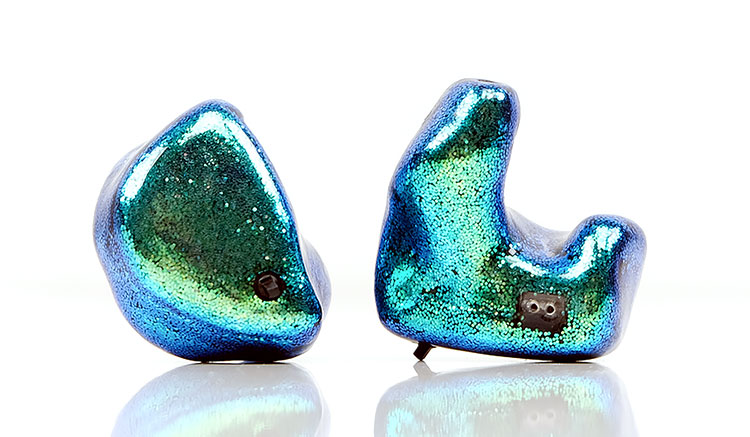 I think there is a lot more to come from the Aether R with some cable rolling. Even at this early stage with the stock cable, I can understand why the original Aether was so popular with that detailed but forgiving sound.

The bass switch works in much the same manner as the Model X but for some reason, possibly slightly less dB gain, t feels more adept on the Aether R, bringing out an even richer full vocal signature and some impressive low-end power. A very impressive start with Lime Ears new flagship CIEM. Stay Tuned!