What Is DSD Audio?

This article on testing was reproduced from the educational archives of Yuri’s Sample Rate Converter website with his kind permission. All copyright belongs to said website and any reproduction of this information below can only be done with the express permission of Yuri Korzunov.

This feature is also part 1 of a two-part series on DSD audio. The second part next Friday will focus more on the shared commonalities between competing audio formats.

Most likely you will already have heard about DSD or used the file format for listening to music on your audio devices such as digital media players or desktop media servers. However, in this article, we will try and clear up any misconceptions you have about what this format actually is and how it differs at a very basic level from PCM.

We will go through the essential points covering the principles of the DSD audio format including; what is actually inside a DSD and PCM digital audio conversion and why it is not easy to compare both formats.

The History of DSD

One of the first digital formats was the Audio CD optical disk (PCM modulation / PCM format). It was a source that delivered low distortion and noise levels compared with analog equivalents such as cassette tapes and vinyl records. A whole generation since then has grown up with a much higher level of expectation in terms of how audio should sound.

We shall negate the whole topic of the recent ‘hipster revival’ of vinyl sales for now. I still think the vast majority of people have forgotten what “real analog noise” actually sounds like.

After the birth of the CD, the demand for ever-improving sound quality could be implemented by increasing either the sample rate or the bit depth of a digital recording.

Audio quality is determined by the level of noise and distortions that is derived from either the encoded format, the chosen software used, or the equipment at hand. The level of audio quality may be normalized by certain psycho-acoustic criteria.

However, Sony and Phillips decided to use another kind of modulation called 1-bit sigma-delta modulation. For further reading on what exactly the sigma-delta module is and how came to be, I highly recommend Chapter 2 of “Look-Ahead Based Sigma-Delta Modulation” by E Jansen & A Van Roermund (Springer Edition, 2011). You can find the PDF link here.

At first glance, using 1-bit is impossible, because such bit resolution (bit depth) causes huge noise levels. However, if high sample rates are used, the noise energy may be pushed out of our audible frequency range (to ultrasound). That action is called “noise shaping”.

Practically, 1-bit conception may be easier, than multi-bit, in a DAC implementation. When DSD is converted to analog, ultrasound noise is filtered. Mediums that contain 1-bit DSD audio streams were previously referred to as SACD (Super Audio CD).

What is DSD? Quick explanation 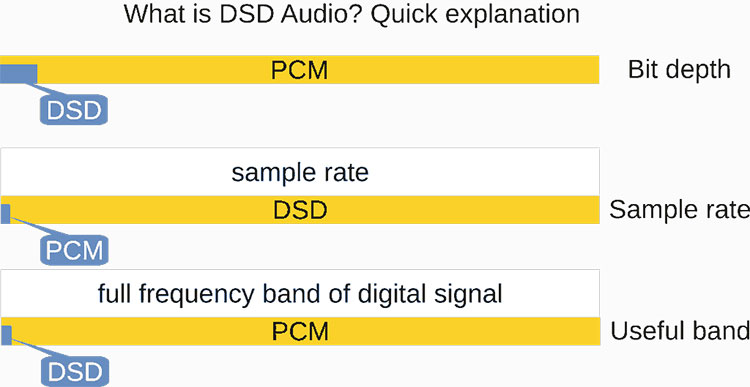 In the picture, we can see that the bit depth decrease is achieved by using only part of the full signal frequency band. In other words, if we want to reduce bit depth, we must increase the sample rate to keep the audible noise level.

Below is a snapshot of some of the key differences between the digital audio formats currently in commercial use today.

Note: WAV and FLAC formats are both PCM implementations. 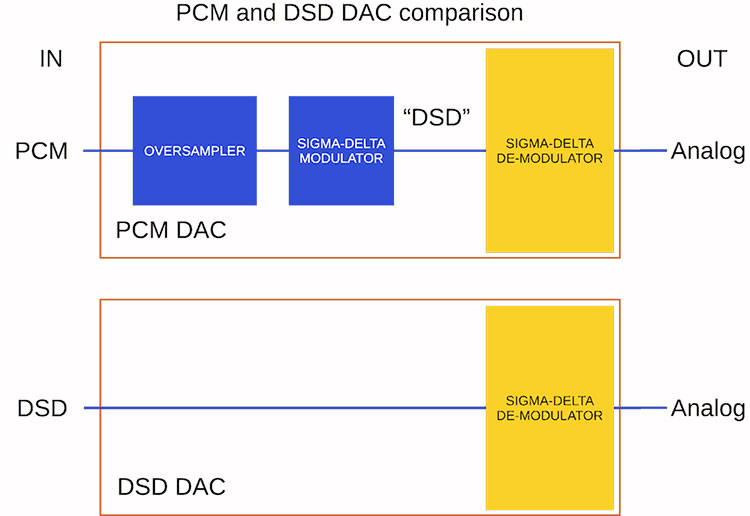 To provide a greater level of PCM decoding precision in this kind of DAC, a digital sigma-delta modulator is used. Post-modulator another sigma-delta component, this time a demodulator, is used to convert the digital “DSD” to an analog signal.

The latest generations of DACs can now accept and natively decode a DSD sample. In these cases, a DSD DAC is much simpler in operation. It contains a sigma-delta de-modulator only and does not require a demodulation process. It is technically impossible to compare PCM and DSD DACs because they use different processing / electrical circuits as shown above.

There is no univocal answer. There are several reasons:

There are many reasons that trigger infinite discussions based on “What is better?”

Technically, both formats are incomparable. Even if a single compatible DAC is used for testing differences in outcome or quality may be caused by different mixing/post-production of records and the DAC deploying different internal circuits to decode the signal.

The general answer should be; “Each case is individual and will depend on the playback system implementation and listened to recording”.

DSD editing is cutting, merging, gain altering, equalizing, etc. of the file(s). “Native editing” (without conversion to multi-bit and DSD re-modulation) is possible for cutting and merging of DSD records only.

All other kinds of editing demand conversion to multi-bit values and re-modulation. In this case, losses in the editing in itself are comparable with PCM re-sampling.