The Westone UM3X is a triple-balanced armature driver universal IEM with a detachable cable system. It was priced at $350 at its launch.

Disclaimer: The Westone UM3X in this review is a purchased unit and does not have to be returned. Thank you to Westone as always for making great products.

You can read more about Westone on Headfonics here.

Westone UM3X
I think Westone Labs made another winner in the UM3X. Sure it's not as fun as the W3 (if anyone can live with the midbass hump and fatiguing highs) nor has the massive soundstage, musicality, and thumping bass as the IE8.
Slide here to add your score on the gear!33 Votes
7.8
7.8
Score
Discontinued
Westone

Today I got something from the courier. I was expecting it yes, as I have been anxiously waiting for it for about two weeks now and the sight of seeing a courier drop by my office was a refreshing change from my boss yelling at me to stop posting replies at headphiles.org (kidding). Well enough of that chat. So without further ado, I present you, the Westone UM3X.

Initially, I was apprehensive about the accessories included with the UM3x- a pouch, 3 pairs of comply tip and a wax loop, for $379 bucks I was expecting a little bit more, like at least more choices of tips, but looking at the bright side, it just means most of the dollars spent on this IEM went to the IEMs themselves. And that’s good. 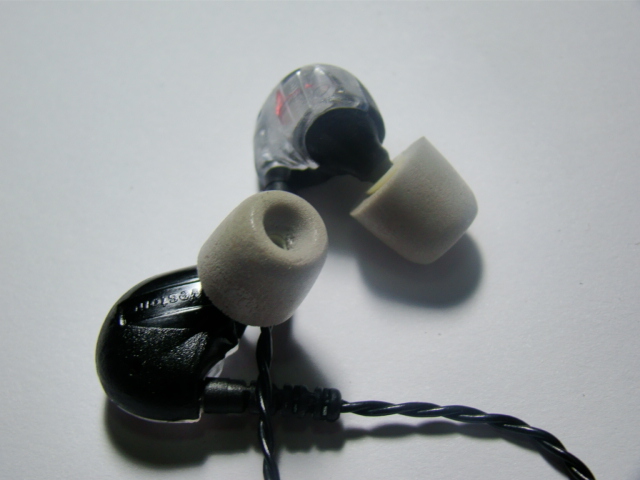 Build quality is definitely top-notch, although I would have to admit that the UM3x is not much of a looker – totally unappealing with its half clear, half black shell.

It’s understandable though. besides, if you’re a musician looking for a good set of monitors, of course, the sound matters most, besides people don’t go to concerts to look at your phones, they watch them perform, so in short, who gives a shi-

The cables on the other hand are impressive. Nonmicrophonic, loads of stress relief everywhere, braided and much more rigid compared to the cables of my cx95 and cx500, although it’s nice to point out that since this is supposed to be worn with wires over the ear and back of the head, the Y junction is a tad bit higher, which might be a bother to some.

I personally don’t have a problem with it whether I wear the cable over the back or in front. and yes most importantly, I can lie on my side with them.

Having limited experience with IEMs with this kind of configuration, I struggled at first to get it in my ear, but eventually, everything worked out, and behold, I was treated to the best noise isolation I’ve ever experienced.

I was definitely in a world of my own (and totally not hearing my sister practically yelling at me to wash the dishes).

Comfort-wise, having only been donning it a few hours, my ears are getting used to it, but it’s definitely better the cx95, cx500, and even the ie8. In fact, i think it’s even possible for me to sleep with them on (like i would dare try.)

Curiously, it shares the same specs as its older, custom IEM brother, the ES3X. I haven’t personally heard the es3x nor have any idea if it uses the same exact technology and stuff, but the um3x is half cheaper than the ES3X, and that’s a pretty good deal in my book.

For this test I decided to use my laptop with foobar > asio4all with the d10 (ad8656 w/ bypass buffers) as combo dac/amp, playing FLAC and mp3s with different bitrates, with a playlist composed of different genres (female vox, jazz, rock, rap, and Rnb, pop, etc) and artists.

From the get-go, it was quite positive that the UM3X requires less volume travel from my d10 to reach adequate listening volumes.

Usually, with my other IEMs, I need to turn it up to about the 10 to 11 o’clock position, but with the UM3X good listening, volume can already be achieved at about 9 o’clock. this probably has to do with the higher sensitivity of the UM3x albeit the higher impedance and the additional power the d10 puts out with the ad8656 & bypass buffers.

Having had a brief listen with the W3 and the IE8 during the previous meets, I would say that the UM3X is the leanest in this department, with the IE8 having the most bass quantity. with Massive Attack’s Protection the bass lacks impact, yet still retains its presence. With M-flo’s Love Song, the bass has a little more quantity and punch, but still not quite to the level of the IE8 or W3.

On the upside, the bass is still well-controlled and goes pretty deep, quite evident when I played the first few minutes of Humectez La Mouture by Stars on the Lid.

If there’s one area that shines the most with the um3x, it’s definitely the mids. The vocals are simply intimate – IMO not too forward yet lush, with The Dawn’s Message in a bottle and Up Dharma Down’s Sana and several other tracks i played it certainly doesn’t feel like the singer is yelling at you.

The IE8s IMO on the other hand comes in a close 2nd, although I feel the bass quantity of the ie8 overpowers the mids a little. Overall I think the UM3X delivers the mids in such a pleasing manner without being too forward or laid back, it may be a tad neutral and less musical than the IE8 to my ears but still manages to be fun and engaging.

The UM3x is not a slouch on the treble either. it does lack the treble energy and sparkle of the W3, but in return makes it up for its low sibilance and less treble roll-off, with just the right amount of decay. I actually like and prefer the amount of treble sparkle of the UM3X as much as the IE8, and from memory, I think it’s very close.

Soundstage wise, this is one of the UM3X’s shortcomings, in fact i would describe the soundstage like being in a small room but (a very big but) instrument separation and imaging is spectacular, definitely more than makes up for the lack of a wide soundstage.

It’s actually almost possible to have an accurate image of the stage, – where the frontman is along with where each instrument is placed and yet each instrument having a finer, more distinct layer.

Detail wise it’s not the best of the limited cans and IEMs I’ve tried, but the subtle details are much more prominent, like the singer breathing through the mic and minute sounds of the lips parting as the vocalist sings.

Last night I tried plugging the UM3X straight out of my Sansa fuze HP and was quite impressed at how easily the fuze drove the UM3X.

At about 1/3 of the volume bar, my UM3X was already loud enough and it was also surprising that there was no inherent hiss, which I initially expected due to the IEM’s higher sensitivity (my normal listening levels with the fuze unamped usually ranges from 40-60% of the volume turned up).

Anyway, for listening impressions, straight out of the fuze HP out I found the midrange took another step forward, yet still retains the smooth midrange execution the IEM delivers.

It was quite a different story with the p4 amp, however, which made the midrange quite polite, which I found a little too neutral and flat already. treble wise straight out of the HP out there was a tad more treble roll-off but surprisingly had a a little more sparkle than with the p4 in the chain.

I found out that the UM3X is the least sibilant with the p4, and vice versa with the Fuze HP out. with regards to the lower end, the bass I think has a little more quantity with the p4 included in the chain, quite close actually to the d10 with rolled opamps. bass extension is more or less the same with the p4 and fuze hp out.

Instrument separation, imaging and detail was also unexpectedly very good straight out of the Fuze HP out although not as refined or as layered and prominent with the D10, even with the less than average soundstage.

With the p4 it was quite of a step-down and sounds a bit flatter, in fact, I was so impressed with how the UM3X pairs well with the Fuze with no amp in between that even with the EQ on the Fuze set to 0 it remains very musical and quite engaging as well. i think at this point  it is safe to say that the Sansa Fuze > UM3X  combo is a definite winner to my ears.

I think Westone Labs made another winner in the UM3X. Sure it’s not as fun as the W3 (if anyone can live with the midbass hump and fatiguing highs) nor has the massive soundstage, musicality, and thumping bass as the IE8.

I  still believe the Um3x is a nice alternative to both followers and newcomers searching for a different flavor in sound. in fact, it not only fills the needs of professional musicians looking for a nice set of monitors but also to the niche of audio lovers looking for a nice laid back, polite, nonfatiguing sound.

In fact, if the W3, IE8, and the UM3X were laid down in front of me, I would probably still hesitate on the IE8, but will ultimately pick the UM3X.