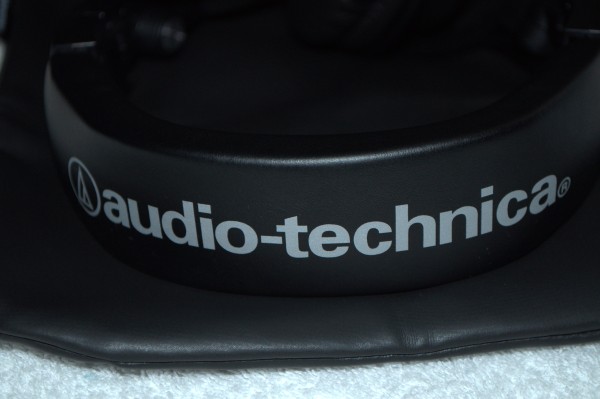 So I got me this headphone, a standard white box, leather pouch and a set of black cans in the package, but with the famous words ATH-M50 slapped on the side. So ok then, just about everyone has had a shot at these, loved them mainly, sold them eventually, but fondly remembered. Would the same happen to me? I mean I am in the market for a nice robust outdoor headphone that won’t stretch my pocket (ok so 8k is maybe a stretch to some but for me its quietly possible), won’t force me to have to bring an armed guard (currently on sabbatical at Sherwin’s house) or a pair of white gloves for handling. Something that I could throw around indoors and outdoors and have an assurance that it could survive.

Well there are a few in the market that hit that mark. Last year for me the Aiaiai tma-1 was the can that really did it for me in the portable closed headphone niche. But.. and it is a big but, it just looked so dang nice that I just could not justify it being outdoors and bro Kyle’s commute experience in the tma-1 thread made me think twice.

Now when I am indoors I really go for the hifi experience – detail, sound stage, imaging – balanced, perhaps even veering to neutral or bright (so I am told anyhow haha!). But when I am outdoors I want something more fun and that has been my mantra for a while now. An outdoors headphone for me must be loud, proud, closed and fun and give you an instant hit. I can do audiophile now and then and an ESW9 on the way will satisfy any itch for on the go hifi But I still need outdoor slammin’. Also having been both a vet of the 80’s rock/metal scene and the early acid/house/techno rave get together I get slam,
I understand bass and it is fun so long as it does not kill everythign else in it’s wake.

Audio Technica packaging is not quite on the level of say Aaiaiai Tma-1 or the Marshall or some of the more inventive marketing departments and not being a high end you dont get a fancy box. So nothing that reeks of “go on open me, you know you want to” like the tma-1 but a little bit better than the HD25-1 II. To be fair, even the ATh-Ad2000 box is flimsy and its a few grades higher and it is not until you get to the W series do you start getting boxes or better packaging.

Did you come to buy for the presentation? No, but like say the LCD-2 or even the KPP 25th ed it can be a nice talking point. 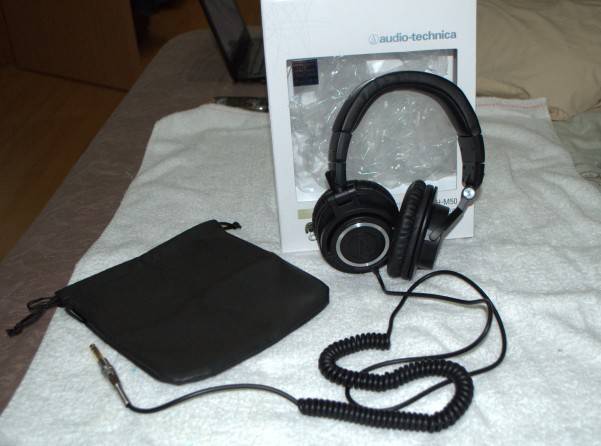 So what comes in the box?

You get the headphones naturally, a nice durable looking leather string pouch and a 1/4 adapter. And that all she wrote folks, that is it; no clothes, no sponge, no special leaflet telling you about its history. Do you need it? Nah, who cares you are going to be looking at one thing and that are those robust looking cans that just came fresh out of the box. 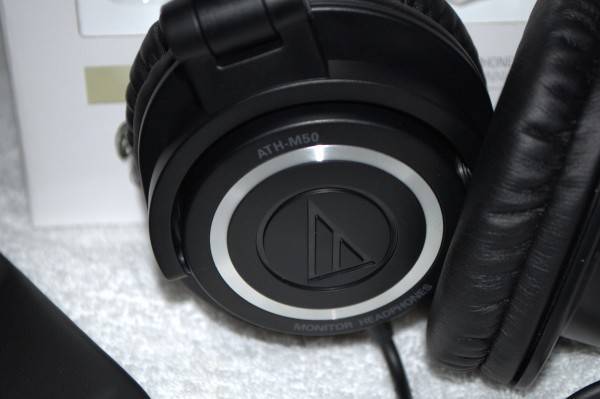 Sporting an enlarged over the ear leather pad, they are nice and comfy and work well on my ears. The build quality is excellent at this range. yes there are a few moving parts so they can fold nicely for portability but they look very well put together with some sold hinges upon which the left and right are very hard to miss. They certainly dont creak and groan unlike the ESW range which can have the odd rattle now and then due to the lighter build.

Sporting a coiled wire (never my favorite as they always seem to catch something) it is terminated with a hefty 3.5mm gold connection (silver outside) with a gold 1/4 adapter screw on. They are a tad heavy and have a small pressure point at the top of the bad that I am not too keen on but the band is overall quite comfy. These things could take a kicking basically and still come back for more! 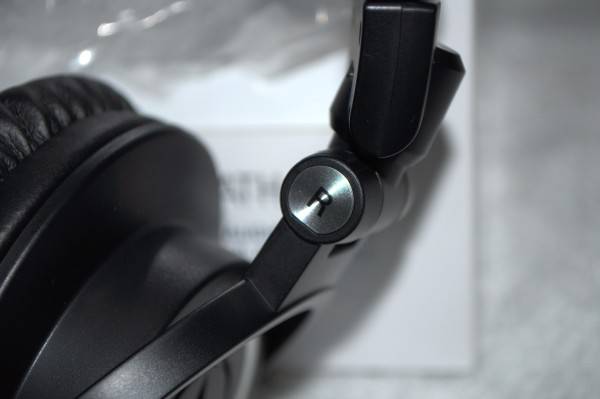 I can tell though that these pads are sweat monsters and true enough after about 15 – 20 minutes I can feel the moisture build up so be sure if you are on long journies and using them to bring a small dry wipe just to keep them in decent long-term condition.

So how do they sound?

Ok so I liked the tma-1 bass and the Hd25, thinking the tma-1 was not as technically good as the Hd25 but was musically superior with a smoother highs and Specs:better extended lows. The HD25 was just too spiky for me even though the treble had better detail and in the end I found it too hot to handle. The M50 on the other hand I felt kept the treble bright but not as spiky and a lot smoother than the HD25 and more detailed than the tma-1 with less roll off which really works perfectly for certain dance genres like trance, dub and techno and probably drum and bass but no fan of drum ‘n’ bass so cant say for sure.

It does at times sound like its a tad compressed, though with plenty of impact its closed nature does give the garden wall effect now and then, but having been to a few dark and dirty raves it does bring back a few memories not unlike what I am hearing.

For Deadmau5 “The Slip” off their Random Album Title the strengths of this headphone really come into play – bass, and more accurately bass slam. They do have good extension though but your lasting impression will be the air pumping slam at mid-bass level. For instance, the Deadmau5 So There I Was track off the same album, the bass slam was huge, humongous for my tender ears and perhaps even overwhelming. When I took them off I felt I had just been to the damn concert itself! I am getting too old for that kind of experience – or so my wife keeps telling me.

For dance these can reign supreme at this price level. It feels more exciting and engaging than the HD25 or tma-1 with smoother treble reproduction than the Hd25 and more clarity on the treble than the tma-1. But then dance has no vocals, dance is supposed to be ultimate bass and treble mix and to a large extent this genre is where the headphones really do feel they are made for.

Ah not so fast then, we don’t quite have a stellar performance here when stepping out of the dance, r&b and hip-hop genre. Using Fleetwood Mac’s Dreams of the seminal Rumors album I felt it just need to spread it’s wings a lot more, more room to breathe.

Sure it’s a closed can so taking that into consideration I still felt the fat of the mids had been snuffed out a touch and Stevie Nick’s vocals came across as a tad flat and struggling to rise above the band. Now its still a smooth sq for me overall but I just wish some of that sparkle so evident in the dance genre came across for the more delicate tracks. Lacking impact? Maybe, but then Fleetwood Mac are not about to get the turntables out and crack open a can of bass just for this review so I take it as I get it – a tad cloudy.

I fell the overall balance is towards neutral/bright side and this is due in a large part to the treble performance. On acoustic reproduction, I feel I can hear a metallic tinge now and then, and there is something a bit missing when cymbals come crashing in. They do overpower the mids somewhat and with that massive bass squeeze they can sometimes make the whole thing sound a tad congested on more complex tracks such as Fleetwood Mac’s Second Hand News where the short guitar and drum blast at the end felt a bit too much for it.

I have to note that being closed they don’t have a big sound stage, bigger than some, but their ability to combat low frequency without distorting really do allow you to enjoy the M50. The imaging for me places my ears about 5 rows back in the audience which sometimes I like but I could end up getting a little tired and needing a breather. The up front nature of the presentation could be what is making me detect metallic tinges in some quieter acoustic presentations and a shrill after taste in some symbol work. 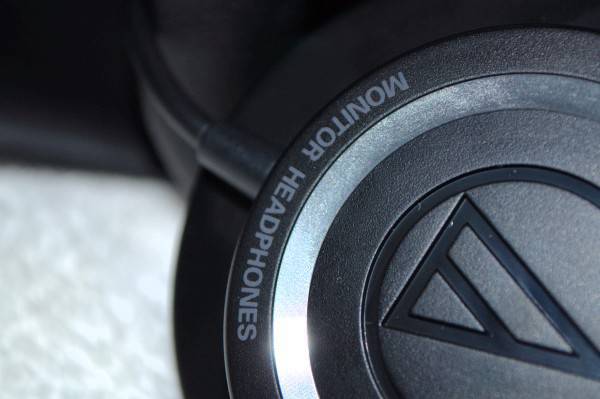 These are dead easy to drive at 32ohms. Working them off an ipod 5.5g rockboxed and the little go vibe petite amp/dac I am pushing the go vibe to about 10am max. Out of the jack they perform just fine also. This adds to its portability mystique and aura and I can well understand why these things fly off the shelves and are hugely popular. They require no real heavy amplification to push them.

A neutral sounding headphone, at times a little bright on the treble with metallic tinges, but with great bass slam, a better than average sound stage for close headphones and more excitement than some of its similarly priced competitors. I would not bracket them into the critical listening category, for me, they are a sound staple for DJ work, consumer fun – like going to watch a big action movie right? Lots of bang, pop and wow but script, complex story building? Getta out of here!!

Am I going to keep them you ask?

For sure, they hit the mark, they are bang for buck, cheap dirty fun and are not going to fall apart the instant the sun shines on them outdoors.