The M-100 in white (my color choice) is beautiful, and being an eggshell or pearl white, it not only looks very classy, it doesn’t tend to show dirt and grime. The white M-80 is made the same way, and wearing the M-80 around outdoors for months, I never noticed anything that needed to be cleaned. The really unusual, possibly unique thing about the M-100’s appearance is the combination of a military-industrial build with the pearl-white and stainless-steel/silver finish. It’s like having your own Abrams tank or B2 bomber in a custom finish – spectacular! At the time I purchased the M-100, an extra set of metal earcup side plates was offered free, with choice of color and even a custom logo. Headband clamping force with the M-100 is very moderate for a full-size headphone, and if the headband were ever to become uncomfortable on top of a user’s head, I suggest pulling the earcups down an extra click so most of the weight is borne by the earcups.

The earpads go completely around my ears, unlike some headphones that are described as circumaural (around the ear). The Sennheiser Momentum is one such headphone where the earpads sit partially on my average-size ears. The earpads are very soft and spongy, covered in ‘pleather’ I would guess, and are the most comfortable type of earpad I’ve used. The dark grey earpad color is an amazing contrast with the pearl-white headphone – whoever designed this must be a fashion genius. The M-100 is the first headphone I’ve had with a single-sided detachable cable that can be plugged into either the left or right earcup. The 4-foot grey fabric-covered cable is terminated with a 45-degree angled Apple miniplug, and the end that goes into the earcup is a standard (non-Apple) miniplug. In case of cable failure, any generic miniplug to miniplug cable could be used, as long as the sleeve ahead of the plug that goes into the earcup is no bigger than 7mm in diameter. 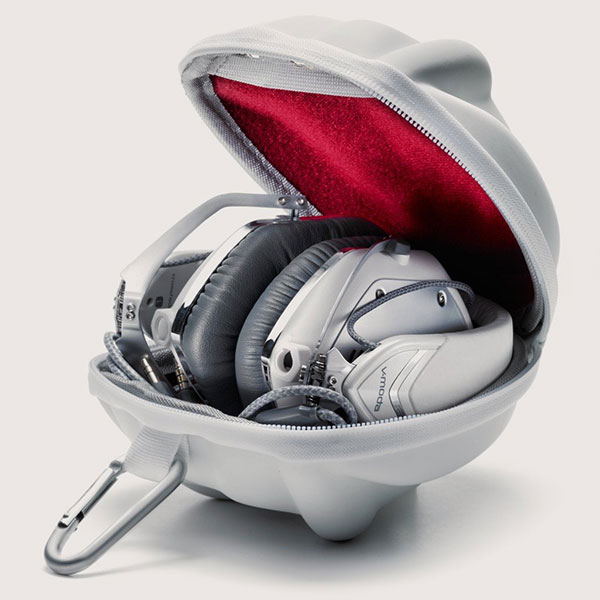 The 4-foot cable has a one-button control with mic about 13 inches down from the earcup, and an additional mic about 4 inches down from the earcup. A second (7-foot) cable is included, having the same plugs as the 4-foot cable, but no controls or microphone. The 7-foot cable also has a short (3.5 inches) extension on the end in a ‘Y’ configuration, where you can plug a second headphone in. I didn’t try it, but I wonder what the effect on the sound would be if you plugged two 18-ohm headphones into a music player using this cable. It seems like that would create a 9-ohm load for the music player, or even less if the minimum impedance of the headphones were less than 18 ohms. The M-100 comes with a small white zippered carrycase that’s suitable for backpacks and airline carry-on bags. This carrycase is plain white, not the pearl-white color of the headphone.

First impression of the V-MODA M-100: Bass! The kind you don’t have to quibble about. It’s there in abundance for any conceivable need you might have. That aside, I see this M-100 as 2 headphones in one (a bargain BTW) – the extra-bass model for gaming, TV action film, house and other bass-centric music, and the hi-fi model (using bass reduction) for symphonies, folk and acoustic, jazz, rock/pop/metal, and other such delicate genres. Unless otherwise noted, all comments below apply to the M-100 using bass reduction, since I listen to music only, and my tastes are mostly midrange-centric.

The M-100’s sound is somewhat dark, having less output in the presence area around 3-6 khz, and more output in the upper bass/lower midrange than my other full-size headphones (Sennheiser Momentum, Shure 1840). Some of the other dark-sounding headphones I have such as the Phiaton MS-400 don’t compete with the M-100, because they don’t have the clarity and accuracy of musical tone that comes with the higher quality drivers and manufacturing standards that the M-100 benefits from. Despite the impression of “dark”, the overall sound is quite lush, and very smooth from top to bottom. Although I stated above that all of the comments from here down apply to using bass reduction with the M-100, I must repeat here that with bass reduction on, the bass is as strong as the Sennheiser Momentum, and the Momentum’s bass is significantly stronger than neutral headphones. With bass reduction off (played flat), the M-100’s bass overwhelms the midrange for the types of music I listen to. 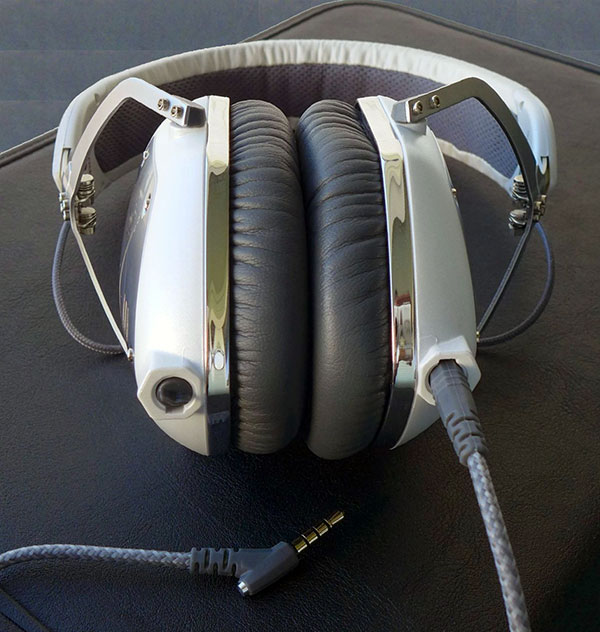 Some of the reviews I’ve read describe the M-100’s midrange as recessed, but of course that’s with the default bass as I noted above. The only thing I would add to my above comments about the sound is a fairly strong output around 8 khz, which may emphasize sibilants on music tracks that have noticeable sibilants. This occurred with 2 of my 1800 tracks, and those were still fine at slightly reduced volume, so not an issue for me. In summary, excellent sound for high fidelity music playback, if you follow my line of reasoning. Soundstage seems average or better for a full-size closed headphone, isolation is also about average (10 db?), and leakage is moderate even with the extra earcup jack plugged. If you were using the M-100 in a quiet office next to someone else’s cubicle, they would hear some sound if you played music at a normal audiophile listening volume.

Note: Played without EQ, it sounds like listening to music at the end of a short tunnel, with plenty of bass added to that. With bass reducer, the bass compares very closely to the Senn Momentum, the treble is slightly better than the Momentum, and the mids are darker, warmer, and less dry. I went back to the Momentum for a few hours and enjoyed the sound, but it felt like something was missing, like gently withdrawing from an addictive drug. I can’t say that the M100 represents better fidelity, but the positive effects are still working for me. Absolute fidelity aside, I think I’m as close to my ideal sound as I’ve ever been, and the things I would most like to improve are: A slight change in the mids to reduce the closed-in or ‘tunnel sound’ effect (which isn’t bad after reducing the bass), and a small change in the upper presence area to mitigate a slight hardness or sibilance, which is audible on a few music tracks.

In other reviews I’ve done I’ve included music samples with comments about how the headphones sound with each track. Here are a few examples:

Beethoven Symphony 9, Solti/CSO (1972): Excellent overall sound. Of special note for this headphone are the bass impacts beginning around 10:30 of the fourth movement. Those impacts won’t overwhelm you since they’re soft and well in the background, but you can really feel the weight they carry.

Catherine Wheel – Black Metallic (~1991): Goth with industrial overtones – I like this since it’s a great music composition and the sound effects are smoothly integrated into the mix. This may sound distorted or mushy with some headphones, but the M-100 renders the deliberate instrumental distortions clearly.

Def Leppard – Bringin’ On The Heartbreak (1981): MTV goth/pop/metal at its best – good ambience and high energy – the better headphones will separate the details and make for a good experience. Lesser quality and the details tend to mush together. The M-100 plays this very well.

J.S. Bach – E. Power Biggs Plays Bach in the Thomaskirche (~1970): Recorded on a tracker organ in East Germany, the tracks on this recording have the authentic baroque sound that Bach composed for, albeit the bellows are operated by motor today. The M-100 plays the tones seamlessly through the upper limits of the organ, which cover nearly the full range of human hearing. Of special note are the pedal notes – tracker organs have low-pressure pipes and don’t typically produce the kind of impact around 30-35 hz that modern organs do. A headphone that’s lacking even a little in the low bass will sound especially bass-shy with this type of organ, but the M-100 delivers the full experience of this music. 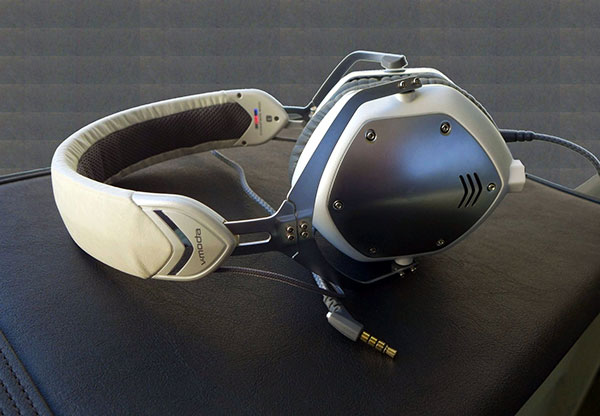 Jennifer Warnes – Rock You Gently (1992?): The strong deep bass percussion at the beginning of this track has been cited as a test for weakness or distortion in certain headphones. The M-100 plays those notes with good impact and control. Having played this track a number of times now, I’m impressed with the M-100’s bass reproduction and detail throughout the track.

Jimmy Smith – Basin Street Blues (early 60’s): This track has some loud crescendos of brass and other instruments that don’t sound clean and musical on some headphones. The M-100 provides very good reproduction. Listen particularly to the second crescendo at 15 seconds in, for maximum detail effect. I’d like to emphasize that these crescendos are probably the worst-case test I have for instrumental separation and detail, and the M-100 plays them well.