Disclaimer: The Topping D10s sent to us is a sample in exchange for our honest opinion. We thank the team at Shenzhen Audio for giving us this opportunity.

To read more about Topping products we have reviewed on Headfonics click here.

Although Topping has been popular for their DAC’s for quite some time now, it was only earlier this year that I had a first-hand encounter with them. I kept reading about how Topping DAC products measure very well and many people tend to choose their DAC’s based on measurements.

I bought my first Topping product solely based on great THD numbers, and it was their recently released E30 DAC preamp. It impressed me quite a bit for the asking price. They have recently sent me their new entry-level DAC with an improved chipset and I’m excited to see how it stacks up against their own E30, and the Khadas Tone Board, which also uses a Sabre DAC chip. 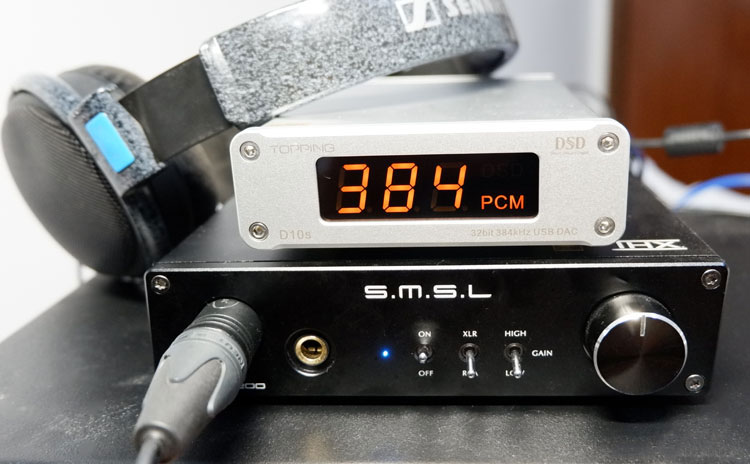 The D10s is a pure DAC, with no pre-amp volume control, or filter controls. What’s inside though is a capable new DAC chip from Sabre, the ES9038Q2M, which can be found in some higher-end products such as Audioquest’s Dragonfly Cobalt which costs 3x as much.

Topping was also able to unlock the ES9038Q2M’s capability to decode DSD256, and PCM up to 384KHz, with a 32bit depth. These are impressive numbers, as some manufacturers like Audioquest, limits their chips to 96khz, at 24bit.

Similar to other Topping products, the D10s also measures very well. Having an impressive Signal to Noise ratio of 120dB, the noise floor is well beyond the capabilities of human hearing.

Although DAC’s are not supposed to color the sound from the computer, it will still have a significant influence due to the pre-amplifier circuit built into the DAC while the converted digital signal is raised to proper signal levels that can be accepted by amplifiers.

It is this circuit and the DAC’s internal implementation that would separate an acceptable DAC from a great sounding DAC. 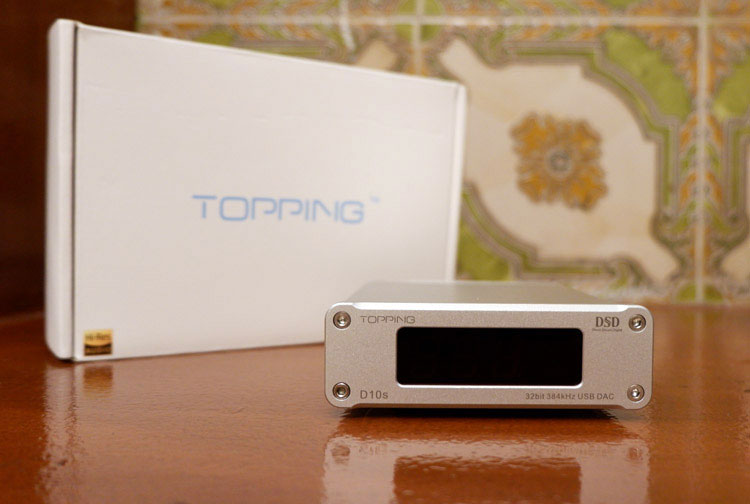 The D10s came in Topping’s standard cardboard box packaging. It’s just functional and safe, and would definitely be able to protect the DAC when shipping. The DAC was protected well in foam inserts that would protect from falls and bumps along the way.

The package just came with 2 items, the DAC, and a USB cable, and of course, some paperwork from Topping. Pretty standard stuff for a DAC, I would have wanted to see at least an RCA cable from Topping, as this is an entry-level product.

The D10s came wrapped in a silky plastic bag, which was nice to the touch, and tends to make me handle the DAC more delicately as I unbox it. Overall, it comes in a standard functional package that would protect it on the way to getting to you. 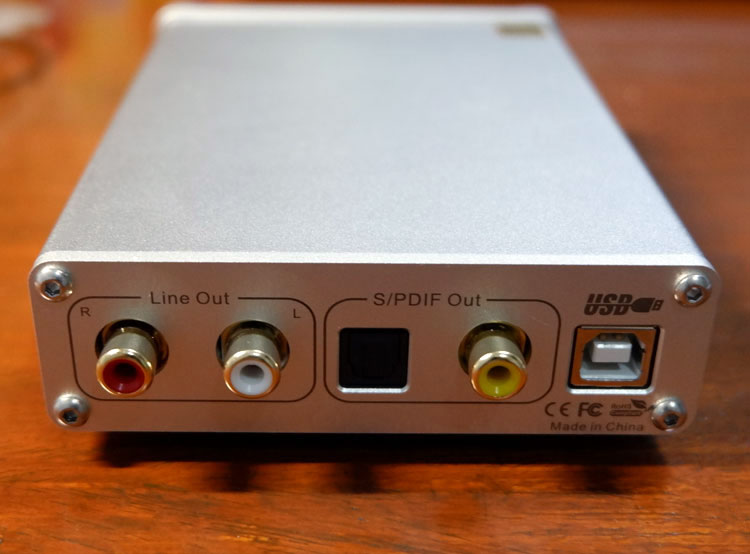 The D10s takes its appearance from Toppings original D10 DAC, except for the new label, they look identical. But this is not necessarily a bad thing, why change something that already works right? They have already perfected how it should look.

I love how Topping chose to present the sampling rate numerically, instead of using some confusing lights as Chord and Audioquest did. It’s just hard for me to memorize which color corresponds to which sampling rate/resolution. Even the brightness of the 7-segment LED display is clear enough without ending up being too bright in a darkened room.

Although the D10s may seem to have a diminutive size, it feels very solid for its size. It’s heavy enough to not move around my desk when its wire is accidentally tugged, or when I’m plugging in the USB cable to my laptop.

The only input to the unit it through is USB, but it’s capable of converting the USB’s digital signal to SPDIF over coaxial and optical for digital outputs. Be sure to set the unit to the proper sampling rate, which is 192KHz for coaxial, and 96khz for optical. The D10s will not be able to output to either if the sampling rate is set above the maximum of either output.

The unit does not require an external power supply and can take power from the USB bus power. This would be an advantage for those who lack extra power outlets but make sure that the USB bus power is clean enough to not introduce any unwanted distortion to the USB signal, which was, fortunately, the case for my laptop.

I tested the D10s as a USB to SPDIF converter and connected it as a digital input to the Topping E30. At first, it didn’t work at all, I kept wondering what was wrong with it until I realized that SPDIF over Coaxial can only take a maximum sampling rate of 192Khz. Once I switched the sampling rate to 192Khz, the E30 was able to recognize the digital signal from the D10s.

I think this would be a useful feature for if you have a superior DAC already available, but that DAC is only able to accept Coaxial signals. Though this might be a niche use case, it’s a nice added feature available to the D10s.

When I tested the USB to SPDIF converter to the E30, I was pleased to hear that going through the D10s to the coaxial input of the E30 did not make much of a difference from plugging the E30 directly via USB. Which leads me to believe that the USB stage of the 2 DAC’s are practically the same. 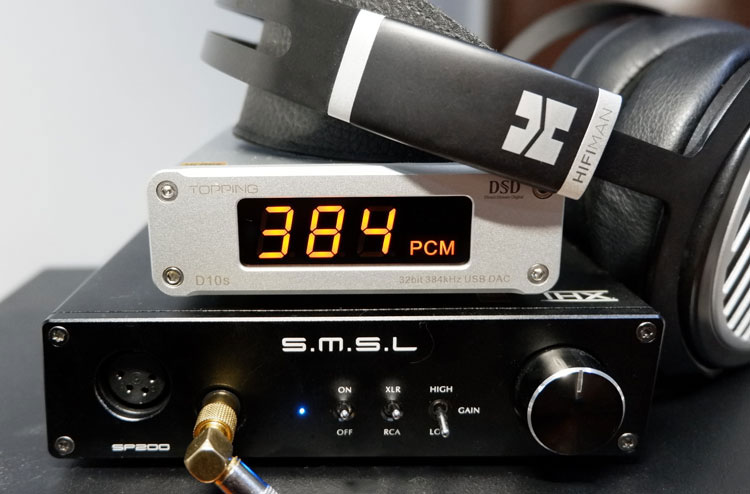 Aside from the new DAC Chipset available in the D10s, it has an output impedance of 20Ω, instead of the 100Ω on the D10. What this means is that the D10s can pair well with amplifiers that might have lower input impedance.

That means the D10s will be able to pair well with a wider range of amplifiers, even when some amplifiers might sip a little bit more power through the RCA terminals.

To review the D10s, I plugged it into an SMSL SP200 THX AAA 888 headphone amplifier. I used the SP200 to drive my Sennheiser HD600, and my Hifiman Ananda headphone. Both headphones are quite source revealing, and would magnify any significant changes in the signal chain, so for the rest of the review, I will sharing my experiences based on this setup.

As DACs generally color the sound less than amplifiers, I’m happy to report that the lower registers on the D10s are about as neutral as it can be. It didn’t add much in terms of quantity and did not emphasize the bass at all.

I can hear details in the bass region, and I’m quite satisfied with how well details end up being presented. Each thump of the bassline is present and has some good body.

The D10s is able to build the bass up well, but the peaking dynamic bass is just a bit shy sometimes. Although the bass is very present and detailed, I would have wanted to have a more dynamic bass.

The mids performance sounded fairly neutral when it comes to the midrange, and I can say that it doesn’t emphasize the vocal range or even the upper midrange. I commend Topping for being able to ensure that the D10s is dead flat.

Again, Topping has been able to keep the frequency response of the D10s neutral. The D10s did not color the sound in any way from the bass region all the way to the treble region. I can say that they have done a great job with their output stage when they are able to keep it flat, leaving the coloration to the other components down the stream.

I’ve found something lacking in some of the other frequency regions being produced by the D10s, however with treble, I can say that the D10s has been able to perform beyond my expectations. I can clearly distinguish the air frequencies, and I’m also happy with how smooth the treble is, just enough to be resolving, while not being shrill.

The D10s is a fairly capable entry-level DAC, but with the soundstage, I found the D10s to be lacking even when just compared to the modestly more expensive E30. I found that the sound stage was slightly more compressed and boxy. I found that instead of having a vast open sound stage, the D10s just boxed in the instrument a little bit and created a wall of sound.

Despite the boxy sound stage of the D10s, the imaging was still very good, as I was able to accurately locate and distinguish each instrument from each other when being played through the D10s. I can say that it did fairly well. 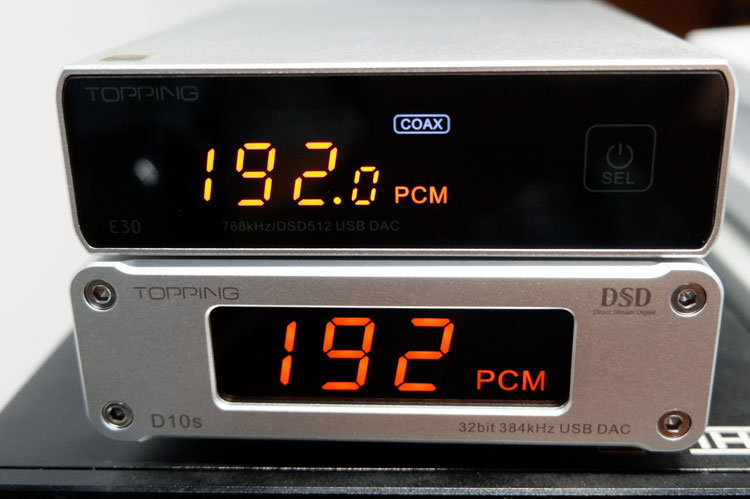 At just $30 more, the E30 makes a good comparison. The E30 has a few extra features like a pre-amp section, the ability to control filters, and SPDIF inputs instead of the outputs that the D10s has. With quite a few more features, one would expect that there should be something that ended up being sacrificed with the E30. And I would assume that it might be the sound.

With this main difference, I found that the E30 tends to be a hair more dynamic than the D10s, however the D10s is able to catch up and best the E30 when it comes to the resolution and clarity. I can hear nuances better, with the vocals, and each strum of the guitar sounds just slightly clearer with the D10s. Between the 2 DAC’s there is no clear winner, just a difference in priorities.

Another DAC that used the same ES9038Q2M DAC chip is the Khadas tone board. While the D10s is in a solid aluminum chassis, with a nice display, the Tone board is just that, a board. I had to buy a separate case for the Tone Board, and it was made of some DIY acrylic plastic, which costs $20 dollars, putting the tone board at $20 more expensive than the D10s.

According to their specifications, both DAC’s are very similar, with a 120dB signal to noise ratio, and both having great THD numbers, with the D10s having 0.0002% THD, while the Tone Board has a 0.00033% THD. One would think that they would end up being quite similar. But the THD numbers are not the end of the story.

The sound coming from the Tone board ends up slightly more sterile than the D10s. Although I wanted even more dynamics from the D10s, the Tone board falls short even further back in that regard.

Tonality on both is quite similar, but it all boils down to microdynamics and details. I can confidently say that the D10s slightly edges out the Tone board in this regard as well. Although they used the exact same DAC chip, I can clearly hear that Topping did something to make the D10s stand out from its competition. 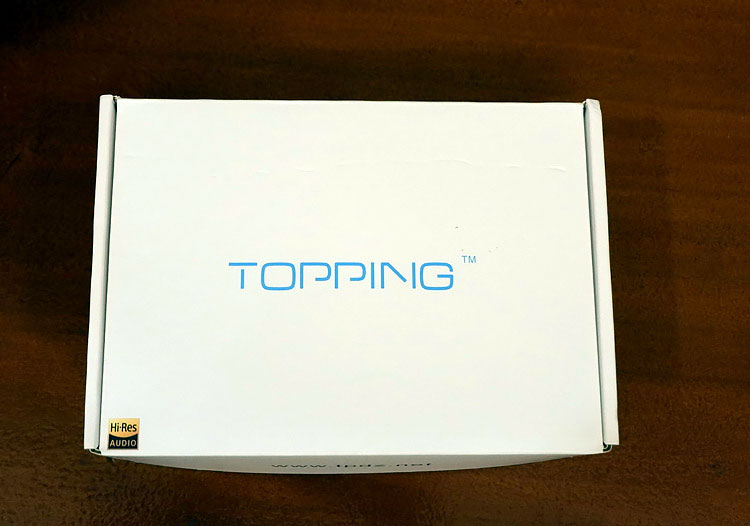 Although the D10s kept the looks of its predecessor, I’m happy to see it has quite a few improvements from the original D10. It has a lower output impedance giving it a bit more versatility when it comes to amp choices. The more updated DAC chip also enables it to reach a much lower noise floor rarely seen at this price point.

Although lacking in the ability to present a dynamic bass or the nuances of the vocal range, the D10s has performed well beyond what I can expect from its price point. I love how it has a very flat frequency response, leaving the coloration to the downstream equipment, and how it is able to image quite well for an entry-level DAC.

With the improvements that Topping has done for the D10s, I’m happy to say that it is a solid performer at this price point.