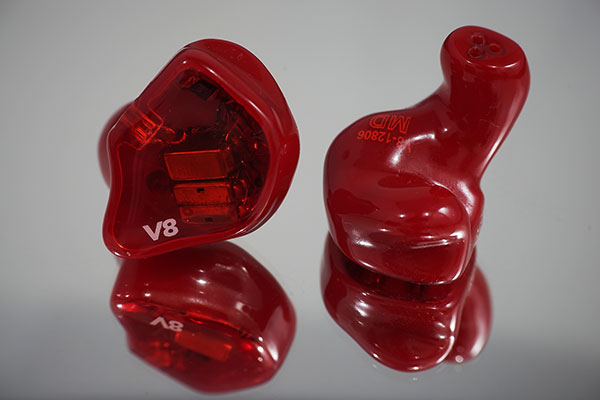 The V8 is what the Westone W50 should have been and what I wish the UM Merlin’s could be. To clarify it has a bass dominant sound signature much like the two mentioned models but with a relatively clean and snappy mid section and an articulate but relaxed treble response that doesn’t get drowned out by the lower frequencies. This is a musical CIEM much like the Heir Audio 8.0 that, whilst not a winner in the accuracy stakes, certainly edges out a lot of the competition for pure enjoyment and is right at home with modern pop and rock.

So whilst the V8 sets its stall out as an unabashed bass head CIEM the overall tonality actually felt more natural than the equally bass dominant hybrid UM Merlin. The V8 for me has slightly less coloration than the Merlin’s more languid but warm tones. With a pure BA setup it also has a slightly more intimate sound stage than the much grander hybrid dynamic/BA architecture of the UM Merlin. I would still say the Merlin can present a better sense of scale and greater extension but the dynamics and punch of the V8 is tighter and more engaging. The W50 also has a heavy hitting bass signature but it feels far too recessed in the upper range to compete with the cleaner and more articulate V8. Things just come off way too dark and suffocating on the W50 to outperform the V8 from the mids upwards.

The V8 is also tighter than the lusher and more fluid sounding 8.0 from Heir Audio, especially in the bass response. The V8 possesses more attitude and aggression than the 8.0’s more laid back approach and has a much faster and controlled but weightier bass response. The 8.0 also packs a BA setup but is a bit slower in pace though possessing a bigger sound stage than the V8 BA setup. The 8.0 richer but slower signature is probably the better choice for longer listening periods over a wide variety of styles whilst the V8 will give you a more intense and dynamic reproduction all that slam could end up leaving you a touch more fatigued.

Soundstage for the V8 is not quite on par with the hybrid design of the Merlin. I always get a more intimate sense of staging from BA setups and the V8 is no different in that respect. BA’s that I have tested before never seem to quite match up to dynamic drivers for a truly massive or immersive soundstage but the V8 does very well indeed in ensuring that it’s more intimate setup is well separated and defined, never congested and with an above average sense of space.

What I adore about customs is their ability to give top notch sound without too much added amplification. Traditionally my portable stacks were double or triple for headphone use but nowadays I like my setups light and breezy. This has become much easier now since the likes of FiiO, Ibasso and AK launched their dedicated DAP’s and the V8 poses no real exception to this rule. However, like the Heir Audio 8.0, amping does indeed make a difference so do not go ditching your portable amps just yet. So let’s take a look at a few matches at varying price ranges so see if this is stacking must or a one layer wonder.

Great match for me personally with an excellent degree of clarity and extension. That natural tonality of the V8 combined with the DX90’s dynamic range, clarity and control makes this possibly the go to matchup for those with budget and performance foremost in their mind. The signature bass response is tight and pretty snappy without ever being too dominating. I remember when reviewing the DX90 I remarked on its superior dynamic range which does seem to suit the V8 to a tee. The V8/DX90 combo also does a great job of bringing out that relaxed treble response of the V8 a bit more than some of the other DAP’s I tested it with.

The AK120 tonally felt more accurate with a much more natural timbre and in particular a smoother lower treble response than the DX90. The DX90 is very clean and clear but the odd time with female vocals in particular the V8 come across as slightly shrill or harsh though without any sibilance. The V8/AK120 combo though lacks a bit of punch and that thrilling dynamic response of the DX90/V8 combo that instantly grabbed me. The whole match felt a little too flat and underwhelming and dare I say it slightly veiled?

The X5/V8 combo had a very nice smooth tonality to it, somewhere in between the AK120 and the DX90. The X5/v8 match is slightly more engaging than the AK120 with a nicely weighted bass response but it didn’t quite have the upper frequency clarity of the DX90/V8 match leaving the V8 seem a little one dimensional and slightly slower paced at times than it need be.

Well the first piece of good news with the 720/V8 match is a zero hiss response much like the UM Merlin match with the same unit. The 720 has a reputation of not being totally comfortable with IEM or super low impedance units in general. The V8 passes with flying colors even though its rated at only 18ohms. As expected the clarity and performance of the V8 is just superb with the 720 much like the DX90 however unlike the DX90 the Theorem is tonally a bit smoother and less bright with a more natural sound lower treble. The 720 also tightens up the bass even further and adds much more texture and depth to it than any of the DAP’s reviewed as a standalone. This is a superbly clear, spacious and transparent presentation and highly recommended.

The DuoAmp/V8 match as expected produced a lusher and warmer response than the more neutral 720, almost tube like and analog in presentation. This was the most fun match out of all the DAP’s and portable amps I tested. There is a little less separation and clarity than the 720 and in some respects people will want to opt for the 720 for its more analytical capabilities, but if you do not mind a little bit of tube-like fuzz then this setup is ideal. It is supremely forgiving and musical with the V8.

FiiO’s little budget busting amp does an admirable job for the price. The E11k comes across as a little darker than the 720 and the DuoAmp also and it has a slight channel imbalance between volume 1 and 2 on the dial (note this is a review unit not a final production unit). It doesn’t possess the same level of detail and exhibits higher levels of decay. What you do get though is a nice smooth lower treble response with no sibilance or annoying peaks, a reasonably wide sound stage, darn good bass slam and overall a healthy dose of musicality. If $1000 is your overall budget and you got $100 loose change after a V8 then you could do a lot worse than pairing with the E11k.

Some people might think that an 8 driver custom priced at $899 is ‘second tier’ in the custom range given a lot of other competitors are higher priced. Rarely these days does a good quality headphone or IEM come out without price being a talking point. The V8 is no different but for the opposite reasons because $899 is fantastic value for the performance it gives.

Those wanting something balanced though might wish to look at the V6 or V6 Stage because whilst the V8 is the most expensive of their customs it is also tuned for the bass head/drummer musician who needs or desires a dominant bass response. It won’t sound as grand as a hybrid and there is a very slight tail off in detail and clarity at the very top end but what you do get is a wonderfully natural and smooth tonality that scales excellently with even budget amping without any background hiss or noise as well as feeling right at home jacked straight out of good quality DAPs.

Something to watch out for is that stock cable which for me should be considered as really something to get the while setup working but nothing more. Swap it out, spend a bit more on a nice aftermarket cable that can push the mids a bit further forward, tighten up the bass and bring out that relaxed treble. The other main thing to watch out for is that darn budget with all the optional extras during the customization and ordering process – so tempting!! 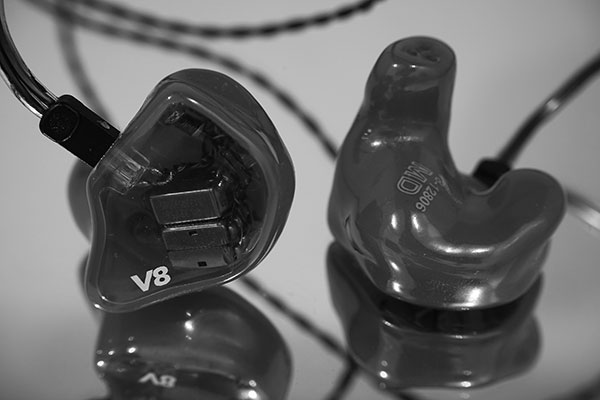