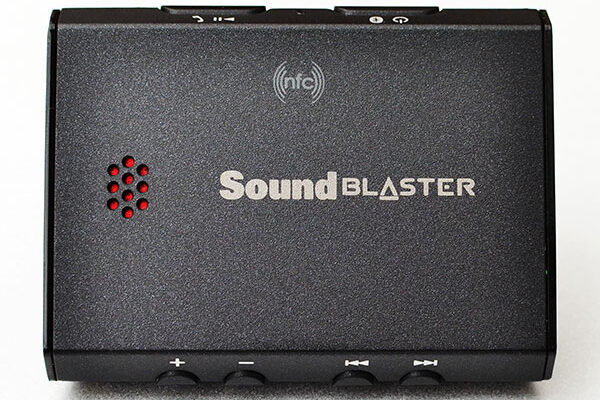 The SoundBlaster E3 by Creative

With its really small size, I am greatly impressed with how much features Creative crammed inside the E3. It’s basically a USB DAC/Amp, but with Bluetooth and NFC capabilities. I must also mention that the Bluetooth uses the Apt-X technology, which allows very minimal compression in the transmitted signal. It also has a microphone with Creative’s CrystalVoice tech which you can use with both your PC and mobile. And with that dual headphone out, you can use it to share your music (been always using it with my wife when we’re on the bus or train). The USB DAC supports up to 24-bit/96kHz on Mac OS X 10.6.8 or higher, Windows, iOS, and a select Android devices (refer to Creative.com for the list of compatible models). Creative also threw in the SBX Pro Studio app (can be downloaded at support.Creative.com) which allows you to tweak the sound of the E3 and a bevy of other DSP settings thru your PC or Mac. The line-in jack can be used to connect your DAPs and use the E3 as a standalone amp. Amazingly, the amp can power headphones up to 600 ohms. This is a Swiss Army Knife of a device, the E3.

Creative, I would say, did a good job with the E3’s sound. I actually did not expect this to sound good, but it did. I must mention that I used my laptop, but most of the time the HTC M7 as source USB out with USB Audio Player PRO as my player. It sounded clean with just enough heft in the low end and a slight mid bass bump. I’m also quite impressed with the enveloping sub-bass. Mids are somewhat slightly recessed, but still sounded satisfying and did not sound hollow. On the bright side of things, it is well-controlled, decent amount of details, and with almost no sibilance especially with IEMs (I used an ATH-CK232, Westone W40, and Inear SD-2). I would say that the highs are smooth in a good way. Good for long listening sessions.
Creative claimed that this can power headphones up to 600 ohms. Good thing I have the Beyerdynamic T1 lying around so I gave it a shot. One indicator of the T1 when it is underpowered is it will become sibilant, yes the T1 is known for its somewhat hot and spiky treble. The T1 with the E3 did not really sound good. It was sibilant all over. It was able to drive it, but it wasn’t enough. The E3 would be better with 300-ohms cans or less.

The one thing I was greatly impressed with the E3 was to how good its Bluetooth sounded. I have used Bluetooth IEMs from Plantronics and Jabra and I thought the E3 trumps all of them in sound. It utilises the aptX technology by CSR. In paper, it supports CD quality (16-bit/44.1kHz) and I think it really does. The difference between using it wired as DAC/Amp and wireless as Bluetooth is very minimal that I opted to use Bluetooth every time I’m out and about. Pairing with Bluetooth via NFC is also a snap. Just turn on the NFC on your device and tap it with the NFC logo on the E3 and voila! You’re paired. There was one thing I discovered that wasn’t written on the manual of the E3 (I don’t know if Creative is aware of this) and it’s the ability of the E3 to be used as a Bluetooth remote. Once your E3 is paired with your device (in my case it’s a mobile), you can plug your IEM/headphone direct to your device (mobile) and use the E3 separately as a wireless remote to control the volume, play/pause, skip tracks and answer calls. Quite nifty huh?

I admit I am a sucker for good sound and no this does not give you audiophile-grade sound, but if there’s one thing I realized is that you can never enjoy a good audiophile recording when you are on-the-go whether in a bus or train. So in my case I always enjoy a good audiophile listen at home. The E3 gives me that enjoyment with good sound on-the-go. At SGD169, I thought creative made a good-value-for-money device here. I highly recommend getting one especially if you are that person who wants to have a good sound anywhere.