The Shure SE846 is the company’s flagship quad balanced armature driver universal monitor with a 3-way system configuration. It is priced at $999

Disclaimer: The Shure SE846 sent to us is a sample in exchange for our honest opinion in this review. We thank the team at Shure for giving us this opportunity.

To read more about Shure products we have reviewed on Headfonics click here.

Shure SE846
Overall then, Shure has outdone themselves with their attention to detail, craftsmanship, and excellent sound quality. The SE846 are really of a rare breed since they not only offer an unparalleled low-frequency response but present with detailed mids and clear effortless highs too.
Slide here to add your score on the gear!75 Votes
8.1
8.1
Score
$999
Shure

Redefining standards within the audio industry is a hard task to achieve and so when a company delves into unprecedented territory, it signifies progression; a venture into the next big thing, so to speak.

Time and time again, Shure has managed to become an embodiment of this progression and has held an influential role in the world of audio equipment since the decade of the “roaring twenties”.

Their huge glass-paneled headquarters in Illinois, which is itself a remarkable feat of architectural design, constitutes the birthplace of Shure’s visions and commitment to achieving total quality. It is no surprise then that this quality-orientated line of thinking has enabled Shure to bask in multiple awards for a variety of their well-established product range.

The Shure SE846, the latest in Shure’s in-ear line up has garnered the attention of many and has faced more public scrutiny than any of its competitors. Released in 2013, Shure has incorporated cutting-edge technology to puncture holes 40 microns wide in the earphone’s stack of steel plates.

The result being a low pass filter said to mimic a true subwoofer experience while still leaving other frequency ranges virtually unperturbed. The high level of technicality needed to build the SE846 has therefore contributed to its princely $999 price tag.

With that said, Shure has managed to evade the arms race between companies such as Heir, Noble, and JH Audio to try and incorporate as many drivers as possible within each earpiece. Instead, the emphasis is placed more on the tuning and to that extent, Shure delivers a quad balanced-armature IEM with a 3-way system configuration for low-, mid-and high-frequency distribution.

The packaging of the Shure SE846 is rather grand and is without a doubt the heaviest I have come across for any IEM. Inside, the box is elegant, minimalistic and professional which all aid in justifying the SE846’s flagship status. The volume of accessories even give DUNU a run for their money and include various soft, flexible silicone and foam tips. Also included is a nozzle removal key to change the filters, a ¼ inch adapter, an airline adapter, a polishing cloth, a spare cable, a cable clip and a crush resistant road case. 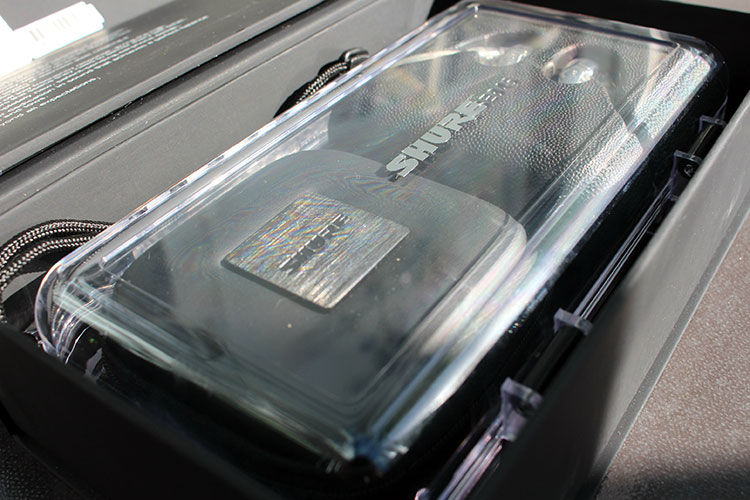 The housings of the Shure SE846 are an object of beauty with a domed plastic shell and brilliantly implemented metal innards. With a flair in micro-engineering, Shure have simply not stopped there and have incorporated laser engraving, their own brand logo and beautifully assembled driver components. The whole design effort is reminiscent of certain luxurious timepieces as well as the attention to detail and expertise required to craft them. Competitors should take a note from Shure’s page and focus their efforts in creating an equally timeless masterpiece.

Looks, however, are futile in the presence of fragility. Luckily, Shure have not neglected this front and the housings, nozzle and MMCX connectors are all robust and well-built. The cable is ensheathed in a firm and secure plastic material which features strong connections to the Y-split, L-shaped jack and MMCX connector. The translucent nature of the cable allows you to see the coiled copper wirings of the SE846 which further enhance the design front of the IEM. 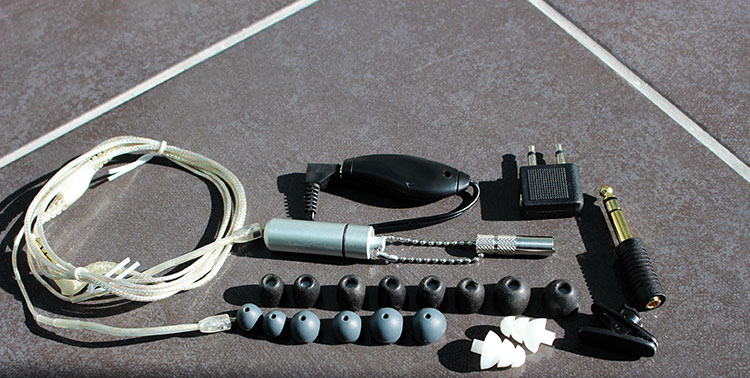 Due to the larger housings of the Shure SE846, some have complained about issues in regards to fit. What I have found, however, is that whilst the housings do appear to be on the larger side, they do remain secure against the outer portion of the ear.

The MMCX connector allows for a 360-degree rotation of the memory cable which ensures a quicker fit without having to readjust every time you secure the monitors inside the ears. A note for improvement would be the memory cables themselves, which although secure, are a bit on the stiff side and could have been made even more flexible to increase comfort.

Isolation levels here are well above average and can of course be enhanced with double and triple flange tips.

Now the Shure SE846 comes with three filters which can be used in the nozzles of each earpiece. Naturally, this is a great tool for customizing the earpiece to suit your own sound signature and you undoubtedly get more room for experimentation.

The three filters differ in sound signature and offer a warm, neutral, and bright sound respectively. To achieve each of the different sound signatures requires a cumbersome process of unscrewing each nozzle with the removal key and replacing the filters for the one of your choice.

This is quite different from the Earsonics Velvet’s method of sound tuning which in my opinion offers a more practical approach with a simple screwdriver to adjust the sound. If Shure were to incorporate this style of tuning, it would not only save time but allow for quick and easier comparisons between the different sound subsets.

Nevertheless, Shure has opted for a classy piece of accessory kit that neatly stores away the unused filters in a slick metal capsule.

Owing to the low-pass filter, Shure’s innovation has decisively shone through with the low-frequency spectrum of the SE846. Bass extends superbly low with great realism and a rich life-like presence.

Tracks such as ‘California Love’ by 2Pac present with an accurate timbre which never feels the need to seep into the rest of the frequency range. In comparison to the Heir Audio IEM 8.0, the Shure delivers a promisingly truthful reproduction of bass which is tighter and a hair leaner than the IEM 8.0s.

Comparing the two warm tunings of the SE846 with that of Earsonics Velvet, the sub-bass on the SE846 delivers more texture and heft whereas with the Velvet, the low frequencies present a completely inoffensive and smooth sonic image.

Can Shure’s claim of a “true subwoofer experience” be substantiated? Well, the bass of the Shure SE846 is in my opinion the best and most well-represented I have heard from any IEM. It certainly does mimic a subwoofer experience and a high-quality one at that too by recreating rumbling lows with great extension.

While the bass is quite substantial in the overall mix, the SE846 escapes from that consumer-orientated signature by retaining articulacy and employing a perfect decay response.

Faithful to Shure’s house sound, the midrange of the Shure SE846 is relatively forward in presence. That is not to say that this part of the frequency is very intimate however as there is still a great sense of air to make these IEMs from ever sounding congested.

There is also a real sense of naturalness in the portrayal of vocals which boasts clarity and emphasizes Shure’s clear sound. Even though the bass has an amazing response, the mids of the Shure SE846 are equally as good as instruments have never sounded more alive and life-like before.

In addition to this, there are never elements of harshness or stridency in the SE846 yet Shure has still somehow managed to evade an overly smooth signature to preserve realistic texture which stays true to the original audio production.

The 3 filters have quite an impact on the midrange frequency, with the bright tuning having a slightly thinner note presentation but the better top-end extension and the warm tuning offering a more full-bodied warm midrange.

The highs of the Shure SE846 are quite subdued compared to traditional balanced-armature sets such as the Final Audio Heaven VIII and Rock-it Sounds R50. Though better in this regard to its predecessor, the SE535, the treble of the Shure SE846 lacks a bit of energy and sparkle even with the brightest sound tuning.

This is good news for those sensitive to treble and wanting a more laidback high-frequency sound but those craving for endless extension might well be left wishing for more. Regardless, the high-range frequencies are still very detailed and clear even if they do not extend quite as high as some other IEMs.

The treble is consequently non-fatiguing and the lack of sibilance aids in comfort during extended periods of listening. 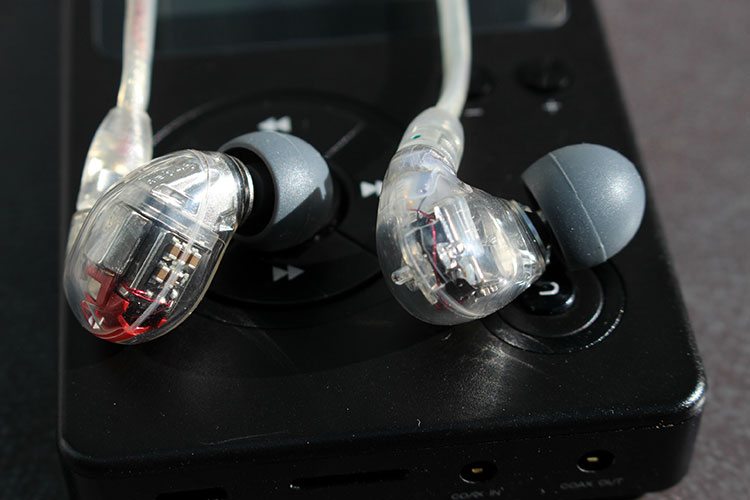 The SE846 has an impedance of 9 ohms and a sensitivity of 114 dB. This means although they are relatively easy to drive, they remain particularly unforgiving when coupled with poor quality sources.

Paired to the great value for money Hidizs AP100, the sound of the Shure SE846 extracts even more details from tracks but at the compromise of neutrality; the sound becomes slightly thinner and colder. Soundstage, however, opens up, with an even greater imaging interpretation and instrument separation.

The Fiio X5 brings out the better bass impact from the Shure SE846 and in contrast to the Hdizis AP100, draws a slightly warmer than neutral sonic image.

This source works well on both low and high-gain settings but low-gain is more preferable due to the hiss experienced from the latter choice. The sound stage is equally excellent compared to the AP100 but the Fiio X5 would be my preferred choice for musicality and overall portable listening.

Next to the DUNU DN-2000, the Shure SE846 loses out in width of sound but presents with a more 3D sonic image. The front-to-back projection is excellent and together with the height and width, make the listening experience captivating and immersive.

What particularly stood out for me was the SE846’s ability to image sound as everything sounds tremendously coherent. As mentioned before, the forward midrange does not impact the congestion because of the good amount of air between vocals and instruments within tracks. 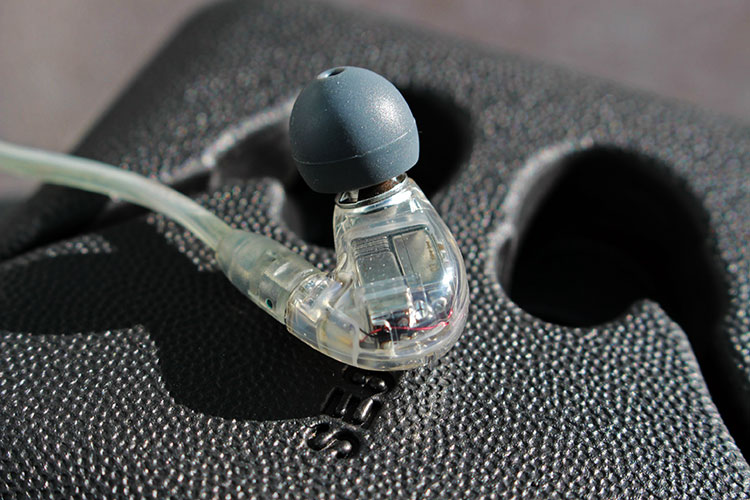 Overall then, Shure has outdone themselves with their attention to detail, craftsmanship, and excellent sound quality. The SE846 are really of a rare breed since they not only offer an unparalleled low-frequency response but present with detailed mids and clear effortless highs too.

The sound engineers over at Shure have been adamant in trying to produce an uncolored sound signature that is very much natural and on that front, they have certainly succeeded. One factor however remains to be an obstacle and that is price.

At a staggering $999, this IEM does not come cheap and represents a significant investment. An investment, in my opinion, worth capitalizing upon because of Shure’s ability to masterfully deliver a rich, accurate, and life-like sound signature. So, will you be reaching for your wallet? Only time will tell.