Noble’s Classic line got a fairly substantial revamp last year and we have been working our way through them steadily since then.

The Sage sits somewhere in the middle of the range priced at $599 and after speaking with The Wizard at CanJam Singapore I got a feeling the Sage was sort of “his baby project” or at least a certain sound he has been tweaking for a while.

Those who have been following the development of Noble’s universal lineup will remember how well the Savant was received by the audiophile community.

This was a dual BA universal that really broke the mold in terms of how previous dual BA designs sounded. Often dual BA’s lacked extension or bias to the top-end sounding too bright or too dark but the Savant was none of that.

Those who bought the Noble X also got a piece of the Wizards thinking on how alternative BA tuning could work for a more consumer orientated sound.

It is clear the dual setup is something of a mission for Noble because the Sage once again takes up the audio cudgels and comes back with what they believe is their best sounding dual BA yet. The fact you can now get it in a Wizard Edition design is the icing on the cake.

The Sage is the successor to the older Savant and is pitched at a similar price point right in the middle of the Classic line. Despite the 4 BA design of the excellent Savanna, Noble still consider the Sage to be a step up in terms of audible sound quality and refinement.

John himself stated that the Sage sits somewhere in-between what the Savanna is capable of in details and extension but taking with it a bit more bass body which he was able to achieve with the Noble X dual driver setup.

The Sage’s 2 driver BA design is built from new proprietary drivers and to achieve that increase in bass performance the internal acoustic chamber now has a reconfigured vented port on the bass driver for superior extension and texture.

The Sage Wizard edition is quite different in aesthetics to the universal aluminum edition though geometrically it is similar to the Sage aluminum edition. Do expect to pay a little more for Wizard editions, $799 to be precise. This is due to the additional cost of those beautifully handcrafted face plates John uses in the build process.

Wizard editions are always notable for their unique face plate designs. They are hand picked by The Wizard himself to add a dash of pop, color or whatever you want to call it to their existing lineup and usually sell pretty quick. They draw heavily from Noble’s eye-catching blend of unusual materials used for their custom designs.

As of the time of writing the Sage Wizard Edition has 10 different plate variations and all with the recently announced internal Silver wiring. Unfortunately, this particular one was out before the Silver series launch so if you want to know if yours has silver internal wiring or not simply look for an”S” on the engraving area. 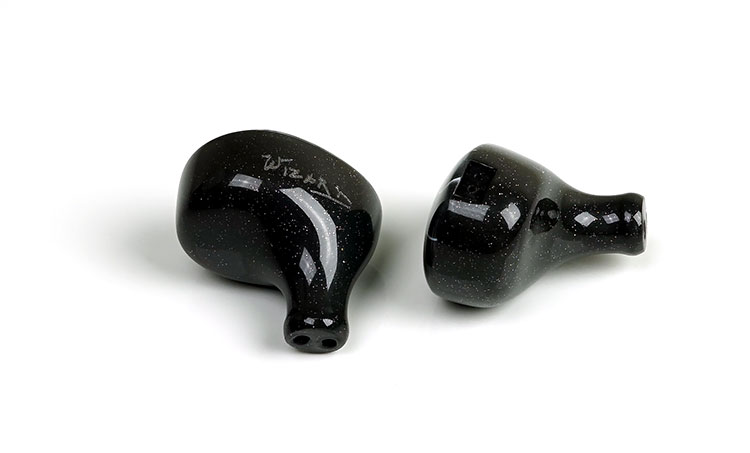 The bottom half of the Sage Wizard Edition is composed of the same ABS plastic materials used on the rest of the Classic line except with a speckled paint finish. The entire body, plate and all, is sealed with a hand lacquered finish to give it a smooth look and added durability. For the ‘sign-off’, here is a handwritten ‘Wizard” etched in white on the side of the right driver ABS housing.

The Sage Wizard Edition follows the classic universal legacy form factor that Noble used before the new Aluminum edition lineup was released. The ABS plastic design though has identical geometry to the aluminum edition but it feels lighter, especially with the lower profile face plate of the Wizard edition shaving a few mm off the overall depth of the shell. As per the rest of the lineup, the Sage uses a 0.78mm 2-pin cable socket that is only very slightly recessed into the ABS shell at the top.

Despite the size being almost identical to the 9 driver Katana Wizard the actual weight in the hand is a little lighter. It is not night and day but the Katana does feel a little more solid primarily due to the additional 7 drivers inside compared to just 2 in the Sage Wizard.

The Sage Wizard uses an SPC tinsel cable approximately 1.2m in length and in a braided configuration with 2-pin 0.78m connectors. The cable is also terminated with a straight 3.5mm stereo gold plated jack and features an aluminum y-split tube as well as a more understated plastic chin strap tube. As with the rest of the line both cable and IEM are designed to be worn over the ear.

You can detach and cable swap with the Sage which I actually recommend you do demo a few because there are some notable changes in the tonality with different cables.

Each two pin termination at the top has a short heat shrink memory wire coating for a more deliberate fit around your ear. The shrink wrap memory wire coating is low profile and should not present any issues to those who wear glasses. It is not terribly memory retentive, you cannot shape it to your liking, rather it holds a fairly fixed shape but it is flexible to adjust to most ears. 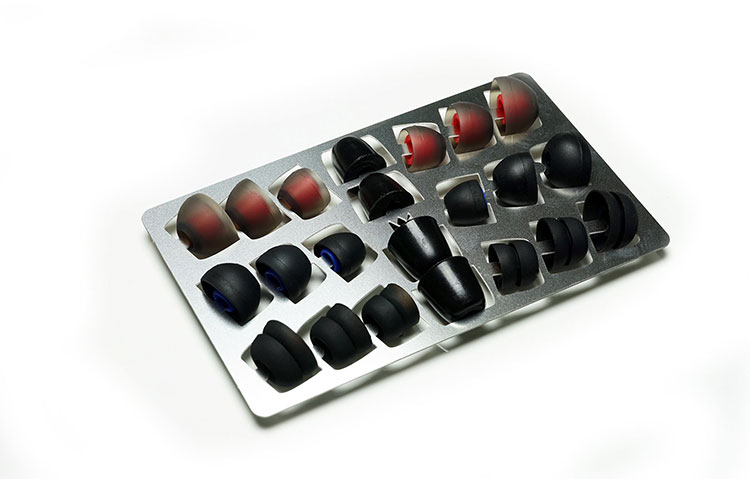 The Sage Wizard has a really small form factor so fitting issues should not be much of a concern for most people. The smooth cornering and soft contours make this a really comfortable fit and like the Katana Wizard, it sits a bit further in your ear sticking out a little less than the aluminum bodies.

Noble supply a fairly wide range of tips including silicone single bore blue and red stem with the red stem being the slightly stiffer of the two as well as dual flange and foam tips.

The foam tips offer the best seal with superior isolation to the silicone versions whereas the dual flange dig in a little deeper and that slightly softer shell make them slightly more comfortable though, like the single bore silicone tips, seal a little less than the foam tips.

Noble continue with the Pelican 1010 hard case which I much prefer over the smaller Otterbox 1000 cases of the previous series. If I remember rightly the Savant also used the Pelican 1010 case. The 1010 is more spacious so you can throw the cool silver aluminum tip tray perfectly in the bottom and load it up with the Sage and a few cables with no fit issues. 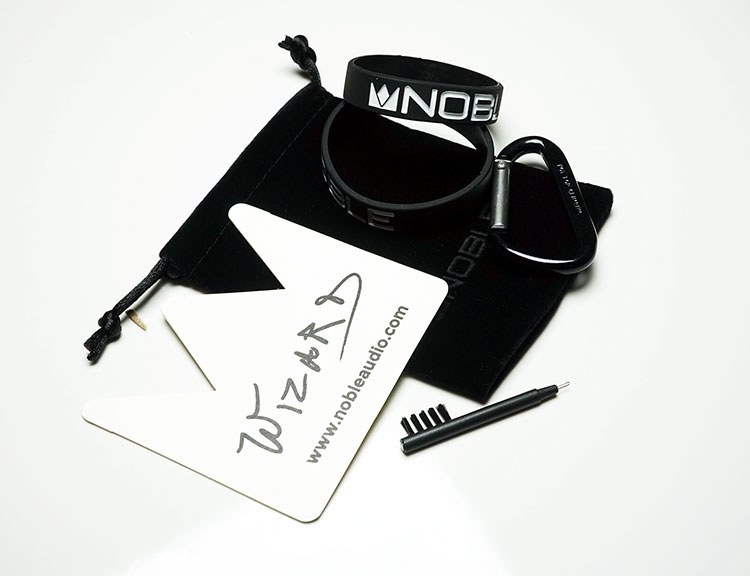 For reference, the included tips are, as always, pretty comprehensive and one of the best to date in a universal IEM offering. They include:

The rest of the package consists of your serial number/warranty card, a soft velvet pouch as an alternative to the larger hard case and a cleaning brush with a magnetized tip. You also receive a metal carabiner for the Pelican 1010 that allows you to attach the case to something like a belt or backpack loop as well as two rubber branded straps for stacking sources and amps.

The Sage is ‘version 3’ and perhaps the most even-handed tonal presentation of the dual driver IEMs Noble have made to date. This incarnation now sounds more balanced than either the X or the Savant with a cleaner more articulate and forward top end which corrects the more languid and laid-back warmth of the Noble X and the soft and slightly attenuated highs of the Savant.

As a result, the presentation of the Sage is airier with more headroom and superior separation but it does not lose the excellent low-end depth of the Noble X, it just sounds tighter and more defined.

In comparison to these two the Sage will likely seem the brighter sounding of the three but it is still a relatively smooth and clean delivery, it just has the better lower treble bite and less mid to upper bass warmth allowing the mids to shine a bit more in terms of clarity and articulation.

The Sage low end is more controlled sounding than the Savants greater midbass warmth. The Sage’s trades a little on mid-bass warmth and fullness for better sub-bass body and slightly less roll off. As a result, and for my money, it sounds tighter, quicker paced and better defined than before.

In the context of the previous Savant and X, it is the most coherent bass response yet out of Noble dual driver range allowing for much superior upper-bass to lower-mids clarity and a more accurate sounding fundamental frequency. What that basically means is any instrumental strike at the lowest point sounds a bit more pure and realistic sounding than the general blast of warmth and color from the X or Savant.

Still a relatively smooth sounding delivery but it not as thin sounding as the Savant with better note body and a more accurate sounding timbre free of any nasty partial overtones. I still got a great sense of instrumental separation but it feels a little more spacious and controlled and not quite as soft sounding.

Vocals are forward, perhaps more forward than before, but cleaner sounding and airier and certainly more life like. This pleases a vocal lover such as myself. With the X they sounded smooth and thick sounding but they didn’t have enough air to breathe so they lost a little sparkle, perhaps not the X focus though they were smooth enough to be very forgiving. The Sage is able to inject more energy and sparkle yet still keep them very natural and sibilant free for both male and female vocals.

There is an uptick in energy from the upper mids into the lower treble that brings out the best in well recorded transient content. Check out the control and pop on Daft Punks “Touch” from their Random Access Memories. The transient response on the Sage is excellent, really capturing the intricate interplay between the layered vocals, solo vocals over a stark background as well as those rising swirling synth passages with sudden abrupt stops. Nothing gets left behind.

The Sage is tuned for a more forward and slightly brighter sounding treble performance than its previous incarnation with better extension and air. At the same time, it’s not harsh, peaky or brittle sounding with decent body and a relatively natural sounding level of decay in the top-end delivery.

There is definitely more sparkle in Sage’s treble performance that gives a much more balanced sound than before and it sounds more coherent than the shelved down X top-end which is probably why you are spending a bit more than the Noble X in the first place.

Just a tip note, I preferred the foams over the silicone tips for the treble response. The silicone delivered a touch more air but took a little something from the treble body and came across as little too thin compared to the more natural sounding performance with the foam tips.