The SA-43 CIEM by M-Fidelity

Ever heard of Jørpeland? I bet you have not but if you figured it was somewhere in Norway you would be right. FedEx took about 10 minutes to figure it out when I was shipping some ear impressions and swore they could get it there. I looked on a map and I kid you not it’s in the middle of nowhere and most likely caked in ice and snow for most of the year that would even have ‘Wilson the Football’ saying “your call but don’t expect me to stay smiling as long as the last time, at least Tom took me to a tropical beach”.

And yet right in that very spot or dot on the map you will find a company called M-Fidelity quietly making custom monitors for a living and getting quite a respectable following worldwide. I had not chanced upon M-Fidelity until I spotted their logo and some thoughts on Head-fi late last year and over the last few months the owner of M-Fidelity, Alf Jakob Middelthon to be precise, and I talked about their roots, what they do and ultimately he agreed to allow us to review his flagship CIEM, the SA-43.

At the time of writing M-Fidelity have 7 custom monitor products in their range all within their SA branding series. These start at around NOK 3190 (approx. $400) for the 2-way BA driver SA-12 all the way up to their 4 driver three way crossover flagship SA-43 which retails for NOK 6290 or around $775 at today’s exchange rate. I have seen these prices fluctuate a little due to the exchange rate but that is a reasonably competitive price for a 4-way CIEM considering the hybrid single dynamic, dual BA AAW W300AR retails for around $675 these days. I still think the 8 BA driver V8 from 1964EARs is the best value CIEM on the market these days but the SA-43 has a few tricks up its sleeve that make it a bit more flexible than the V8.

The SA-43 itself has been out now for a few years initially under the Starkey Norway brand but now more prominently under the M-Fidelity brand when Alf broke away from Starkey a few years ago but it is still going strong and their dealer network is expanding into the likes of Singapore and SE Asia with a recent setup with Chester and our buddies at Music Sanctuary.

Outside of custom monitors M-Fidelity offer a few extra accessories in line with the hearing and audio business. These include a wide range of inline detachable cables for their Custom SA range for iOS gadgets, Android and Sony, a small selection of standard braided pure audio cables, hard cases, spare brush and wax guards. The wax guards I have never received before or used but having read about them and what they do I have to say I wish a few more customs manufacturers threw them in also for blockage prevention in the bores.

Essentially every time you stick in a set of earphones or customs you are throwing them into a pool of dirt and wax, normal for a human ear. During the forward motion wax slips right into the tips or bores. Without repeated cleaning this builds up inside the shell and basically messes up the sound quality. These little guards help keep the bores clean without any fuss keeping everything tip top shape. An essential tool for me and the tropical climes I reside in. You get a set amount, you do not have to change them every day if you clean them regularly either.

The SA-43 is a 4 driver three way crossover BA design. Whilst that in itself is not unique, heck for a 100 bucks more you can grab a vanilla unit of the V8 from 1964EARS, it does come with a really unique feature that I find myself playing with quite a lot and it does impact on the final signature delivered.

On the front face plate of every SA-43 you have a set of dual switches that operate independently of each other or together depending on your preference. Each switch is designed to filter the driver in a certain manner to change the signature of the SA-43. One switch boots the bass frequency response and the other switch is for an enhanced vocal presence. Both can be used together, both can be set on and off independently. Its similar a little to the Vision Ears VE6X Control system only in this instance M-Fidelity have really gone for a more pronounced change with each switch and as such you can actually create roughly four entirely different sound signatures for the SA-43 depending on your preference. I have my own preference which is to have both switches on.

This is old school in a good way though not without some hiccups along the path. Still if you value a one to one chat via email or even on the phone depending on your location then M-Fidelity is pretty good at that. I found turnaround time between email and queries to be more than acceptable, sometimes instant, sometimes next day due to the time difference of around 7 hours.

The website sadly is also very old school and I am not sure it does the best job promoting the benefits of going with M-Fidelity over other brands. To say it is understated is well, understating things to put it mildly. It is purely functional in terms of what you can buy, what the tech specs are and the price. Payment is PayPal or bank transfer so international customers I would say go the PayPal route if buying for added protection. You can of course opt to go to one of your local dealers in whatever region you live in to get a more hands on experience and guidance in ordering and receiving, perhaps even get a feel for the design options with the usual demo units and hear a little of your desired unit. But for those not lucky enough or never heard of M-Fidelity before I would honestly say time for a website overhaul – throw in some yellow, it’s awesome! 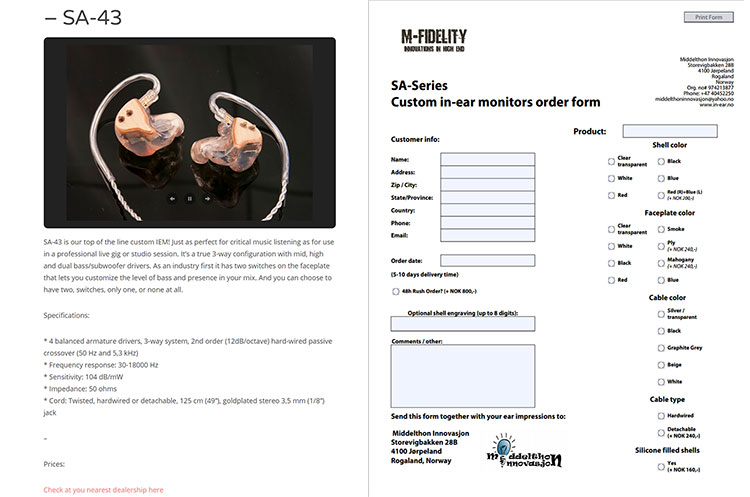 When it is time to order you are presented with a downloadable form to fill in all your details. This is norm for a lot of companies, only thing though is there is no indication of what the colored shells look like on the form meaning it’s a bit hit or miss as to how it will look. The options on the form look rather limited. I went with white, all white in fact but this was after some careful discussion and demo pics of the all-white unit sent to me via email. It’s not a pure white plate and shell match (transparent and black are the only holistic matches color wise) but it’s complimentary and looks relatively similar to the pics presented via the email. A far better option before you place your order on the form is to go to their Facebook Page and check out the existing designs they have for your usual inspirational push.

Further options can be added also via the form and luckily M-Fidelity have done a nice job allowing you to customize your switches to match the cable and give you the cable in a few color scheme options beyond the stock black cable you tend to get with a few other customs companies. I decided to go with a beige switch and cable setup just to have something different for once. You can have them detached or hard wired 2-pin and hard wired 2-pin is a little cheaper overall. Personally it is worth going detached to allow you to mix and match at a later stage with aftermarket cables. 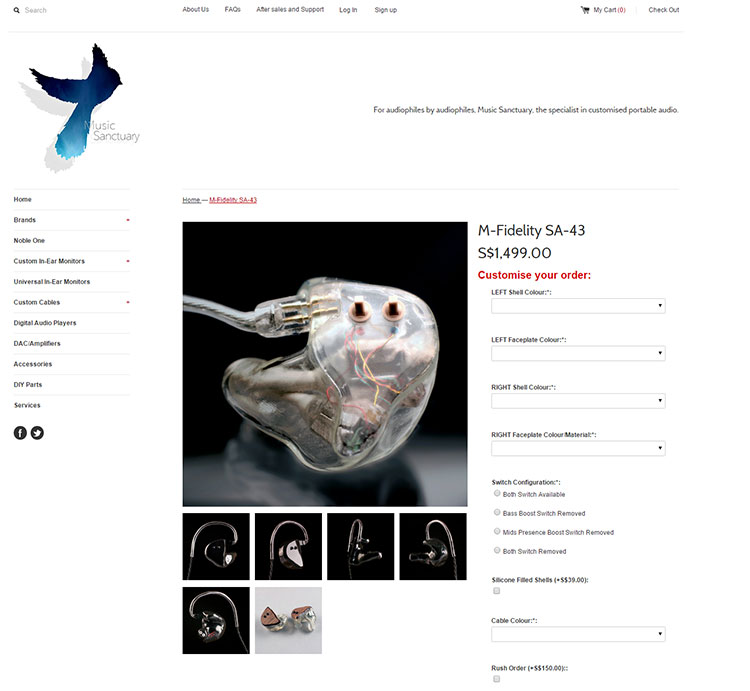 One of the better dealer sites I felt for handling options to customize online for M-Fidelity is Music Sanctuary who bring a touch of flair and customization right to your fingertips. Of course this is one of the Asian dealers and your local dealer might not be as progressive but it does help to calm nerves and increase the impulse to hit “purchase”.

For M-Fidelity I went with a closed ear impression. This is a full impression beyond the second ear canal bend and keeping my jaw closed but relaxed. Being the usual audiologist this meant Dreve OtoForm KC clay which roughly has a two week lifespan before it hardens up. I am kind of used to this clay now and as we progress to the umpteenth impression my handy advice now includes taking a picture of all your impressions before you send them off as below. You are going to get fussy as you go along because you know exactly what works and what doesn’t however if this is your first impression or possibly, luckily, your second then look for the length as your primary driver, following by contours and detail and fullness. 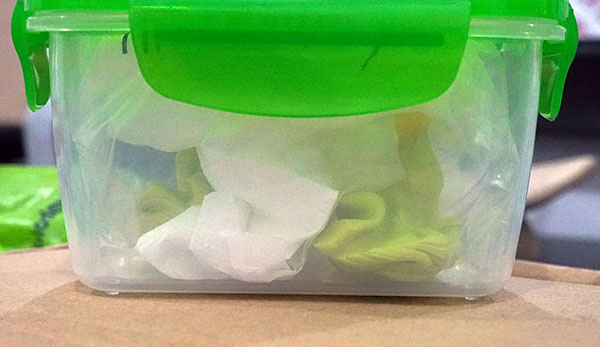 Take the cautious approach, go deep with the clay and make sure it is not too short and reject anything that even remotely looks like it just got past the second band and no more. Make sure the detail is there also. This means the curves are clean but not too smoothed out or bland either. You want those bends to be accurate or the fit will be either too tight, wrong shape or worse too loose meaning no seal. Refits are free but shipping back to the company sadly is not so the costs can add up with a poor impression. After you get the right clay impression then drop them in the usual hard small box like the usual picture above with one or two lightly scrunched tissue paper (not cotton wool as it can deform the impressions if too tight), seal and pack and send it off with your courier of choice to the address as outlined by M-Fidelity on their website and order form.

Just a small but important note M-Fidelity are promising a 2 week turnaround time and for a few bucks more you can get them to finish your project within 48 hours. By my reckoning that is the fastest turnaround time of any custom manufacturer that I know off so hats off to M-Fidelity. Mine actually took 3-4 weeks, that’s no reflection on M-Fidelity’s actual turnaround process but more of the fact I am realistically at the end of the queue given this is a review unit – customers must come first. If anything as a review unit it is one of the faster ones to turnaround also.