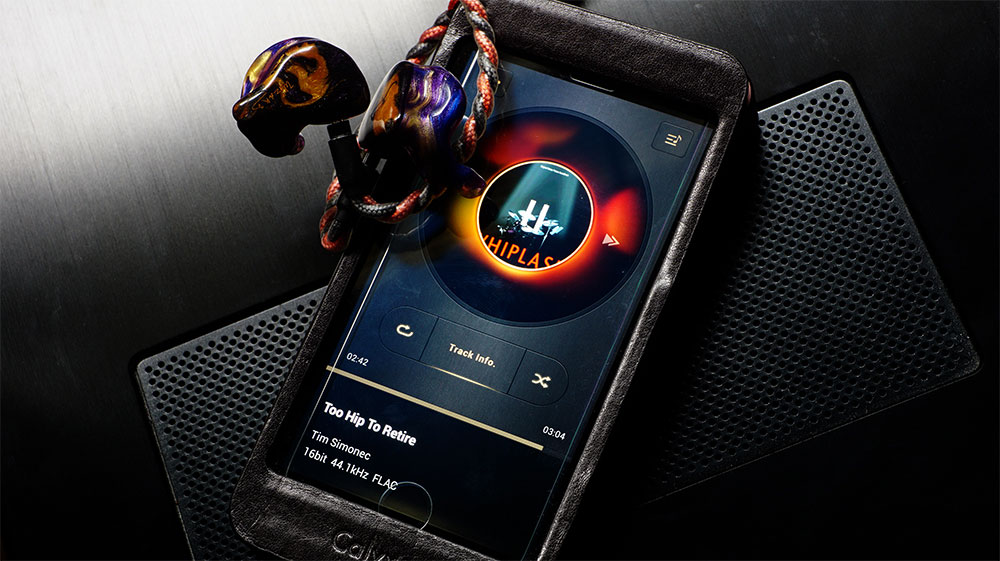 The M DAP by Calyx

This South Korean company burst onto the scene recently with their beast of a DAP, puffing their chests and boasting impressive DSD capabilities and high driving output power in a portable music player for us audiophile nerds.  I have to admit, this DAP is one of my favorite music players that I’ve ever reviewed, but it isn’t faultless and I’ve quite a few gripes that I hope get addressed in future firmware updates.  Can Calyx stand up to the competition and go toe to toe with the likes of Astell and Kern?

Before getting started, I need to thank Sunil at Care Audio (http://care-audio.com/users/awp.php?ln=714897) for supplying this Calyx M for review, he runs a high end audio shop in NJ and I highly recommend you stop by his location or give his website a visit, he is an awesome guy!  I’d also like to thank Chris, Calyx’s USA distributor, for handling the press/product support side of this review.  Both of you guys rock.

The M comes with a nice box with the Calyx logo etched into the cardboard, as well as a standard mini USB charging cable.  Nothing fancy, but anymore is really needless and I prefer to cut costs this way than include an array of cables or accessories I’ll never use.  I don’t need a bag, cleaning supplies, a new kitten, new socks or whatever else generally comes with the higher end DAPs in recent times.  Keep it simple, I already have all the needed components to get this product started and running so I am very happy to see there is nothing needless is included that clearly was added to the bag to jack up the cost of the package. A screen protector would have been awesome though; I wanted to insure my Calyx M never takes a single scuff over the duration of its life time, so I’ve opted to purchase a leather case from some obscure website in Korea, as well as a standard glass iPhone 5s screen protector.  It doesn’t quite fit, but its fine…those things cost like $30 so I am not willing to shell out more cash to find one that fits properly.  90% screen coverage from this protector is just fine by me for now.  I’m double protected and couldn’t be happier, as the Calyx M comes with a gorilla glass OLED screen to begin with. 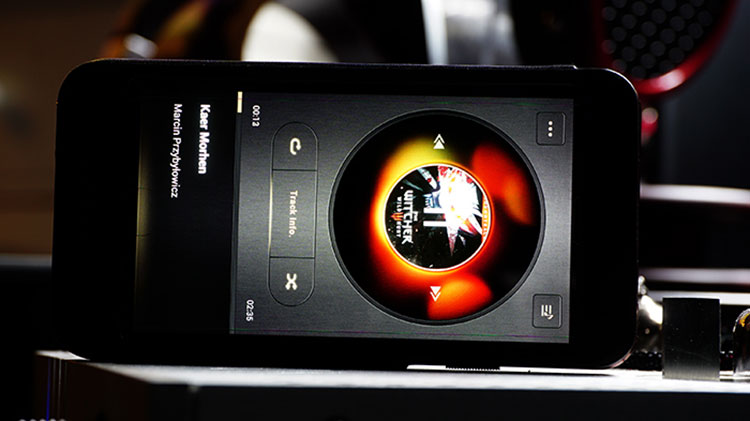 This DAP is easily boasts the best looking screen I’ve ever seen on a portable music player.  The 4.65 inch OLED screen is stunning, vibrant and just a joy to look at.  I’ve found myself just staring off into its depths now and then when I am sitting around listening to audiobooks or something, which is a thing I’ve not really ever done with any other DAP I’ve reviewed in the past.  Sure, the AK120 was decent, as is the AK240 from Astell and Kern, but there is clearly a superior quality screen in this Calyx M than the Astell and Kern first gen DAPs.  Touch screens are nice to have, but in this case the lack of on screen objects to actually touch in the now playing window is a bit of a saddening factoid that looms in the back of my mind, but more on the UI in a bit.  Colors pop so well on this device when indoors or during overcast outdoor conditions, which is something that I wish all future DAPs start using.  Let the common panels die already, OLED is the future…and it is a beautiful future indeed.  The only gripe I have is that sunshine is the mortal enemy of this type of a panel, even cupping my hands around it to block the sun light doesn’t help in making things easier to view. 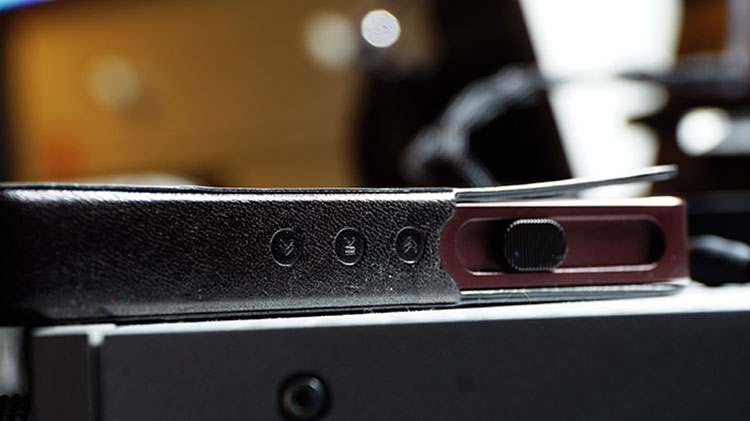 The side of the unit is adorned with a play/pause, track forward and track backward button panel and I find them to be overly tiny.  I would have preferred something more easily accessed that wasn’t set in the worst position imaginable for trying to hold the player, as well as toggle one of those buttons.  Too often have I tried to pick the player up with one hand and accidentally hit one of them, this entire section of buttons should have been designed into the upper area of the side of the product, not more centered as is.  It is a bad position, I hope Calyx fixes this in future DAPs…I mean…this is a touch screen player and I feel we just don’t need hard buttons like that in today’s tech world.  When the unit’s screen is disabled via one click of the power button, I find those three buttons to be too small to toggle accurately very often.  Let’s just skip them entirely next time, shall we? iBasso got it right with their DX50 and 90 DAP via giant buttons right on the front of the player, but also missed the point of what using a touch screen player should entail.  I’d much rather have a full face touch screen like the Calyx than the half screen size, half giant buttons of the iBasso’s though.

Calyx also did something extremely unique and something I am extremely thankful for: full size SD AND microSD support.  Wow…someone finally did it.  Great job, Calyx!  Thank you for listening and actually taking the time to listen to the gripe most of us have with the other high end DAPs.  The top of the player has one large SD card slot, as well as a microSD card slot right next to it.  Great for us who want our entire collection inside our portable experience, combined that with onboard 64 GB of space and you can achieve just over 500 GB of storage space at the moment with a full size 256 GB card, a 200 GB microSD card and the internal 64 GB available.   Nice.  Load times are not a problem either, although my 256gb full size SD takes about 2 minutes to load and scan each time I turn the unit on, but Calyx included a cool feature in that your playlist track that had been active prior to shut down will be able to play while the scan of the library takes place.  Shame though, that there is no memory recall for where that last track left off.  Instead, it just cycles the track back to 0:00 and will be ready for you to press play upon boot up. 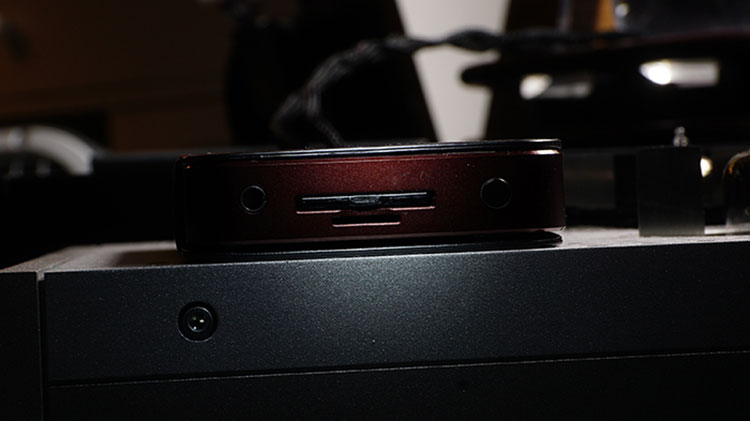 The biggest gripe I have about this player, bar none, is the horrid battery life.  The website says 5 hours, yet I’ve never once gotten anywhere 5 hours of continued usage even on low gain mode.  High Gain is just a cosmic void, energy sucking black hole for the battery and I’ve had to purchase an external battery just to add a few hours of usage.  My 10,000maH battery pack grants me double the battery life to about 6 hours on high gain mode.  This is in fact the worst battery in a DAP I’ve ever seen, but I am not sure it’s the fault of the battery at all.  Actually, it’s the insane output power this DAP has to offer combined with the energy draining DAC chip.  I can power 250ohm headphones without a problem, but of course that drains the battery faster than I can blink.  It is awesome to have such a great and powerful driving force here, but I am not sure it is worth the cost of totally sacrificing battery life.  Yikes.  Expect just a few hours of usage with the Calyx M even on low gain.  More often than not, I recharge mine twice a day and I grow so tired of seeing that damn 19% warning flash on the screen twice in one day.

**Ok, Houston…we have some problems.  Before I list these issues, know that the Calyx is still one of the most functional and slick UI’s I’ve played with in a hifi DAP that I’ve experienced.**

Why on Earth is there no ability to shuffle all tracks on this DAP?  I’ve never been so angry at an audio product before for not including such a basic thing.  This is 2015 for crying out loud and the Calyx M runs on an Android platform.  Gen 1 Droid phones have shuffle all track functionality, so how can this $999 hifi DAP not have it!?  I’ve asked them for a firmware update but was told it isn’t likely to ever be fixed.  It seems like a simple fix, doesn’t it?  I can shuffle Playlists though, no problem there when trying to randomize anything added to Playlists…but why can’t I shuffle everything in the Track selection tab?  Album, Artists and Track tabs work fantastic and even have an A-Z side bar for quick skipping around the playing field based on the first letter of the Artist, Album or Song.  There is even an awesome search function that works flawlessly. 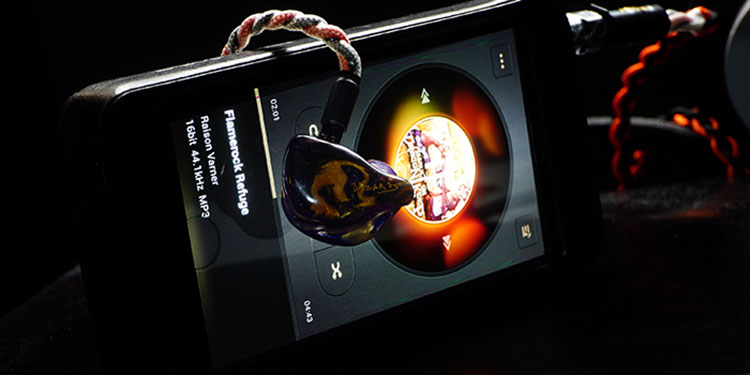 Tapping and holding the screen on top of a track title will open a small bar that lets you delete the track or add it to a Playlist.  Thank the audio gods Playlists are not broken (Hifiman, I am looking at you right now) and that work perfectly without a hitch.  I can generate a lot of different Playlists, not sure what the limit is but I am so happy it is very easy to create and manage them.  Once a track is added to your selected Playlist, you can rotate or drag songs around in the window listing to any sequence you want.  If you have 100 songs in there and add one more, that last song will appear all the way at the bottom of the list that you have to scroll down to, but you are able to drag and drop it anywhere.  The problem here is that the scroll and drag speed is beyond snail pace slow and you can easily sit there for 5 minutes trying to take the 101st song and drag it back up to the first spot.  Ugh.

**Outside of very minor and FIXABLE WITH FIRMWARE UPDATES issues that revolve around the UI, it is very smooth and fairly basic.  I don’t want more complexity, everything here is easily navigated and I don’t have a single gripe with the actual physical setup of the units UI.  Most obscure brands like this generally have horrid UI setups, but thankfully Calyx gets it and made sure to keep things elegant and simplistic.  I don’t think it is any better or worse than the Astell and Kern AK gen 1 UI, so that’s a good thing I suppose.  For the love of God, Calyx! Please! PLEASE UPDATE THIS PLAYER TO SUPPORT SHUFFLE ALL TRACKS!!!**

The Calyx M is friendly with a host of track types that include all of the following: