Last year represented the rise of multi-BA iems; the years before 8 driver ciems as the 8.A and JH16 had reigned supremely, but they already feel like stemming from a distant past due to the rapid progression in engineering. 10 – 12 BA iems seem to have become the new standard for flagship iems, most recently culminating to the launch of the spectacular 14 BA driver Zeus. So it’s pretty hard to imagine the EarSonics S-EM6 was the first universal iem with 6 BA drivers. EarSonics initially catered to musicians, but the S-EM6 represented their growing inclination towards the audiophile market, with their recent flagship S-EM9 as a fine example. It’s only available as universal, designed ‘for audiophiles’. The S-EM9 also represents another first from EarSonics; this time to produce an iem with an unconventional 9 drivers.

Having owned the SM64, Velvet, S-EM9 and now S-EM6, I’ve had my fair share of experience with EarSonics’ products. So you can trust me when I say EarSonics has never had the ambition to create particularly neutral sound signatures. Their iems share a very recognizable house sound: emotional over analytical. With thick and smooth notes, minimal to no sibilance, and high-quality impactful bass as trademark characteristics. Simply said – their aim is a very musical and engaging presentation. They also share a forgiving nature, and a relatively high impedance ranging between 40 and 90 ohms. At first, their general sound was tilted towards mid centric, with the S-EM6 following the path of the SM64 and the SM3 before that. More recently a switch was made towards a more U-shaped signature with the models that followed after (EM32, Velvet and S-EM9). But it doesn’t matter which one you play – you instantly hear it’s an EarSonics.

EarSonics doesn’t shower you in accessories (like something as the Dunu DN-2000J), but their iems come in a fairly luxurious presentation that breathes an air of professionalism. The box is a simple matte black, both on the outside and inside. Upon opening of the box you’re greeted by a thank you card for purchasing an EarSonics item, written in French. Not to panic, most people will understand the general gist from the prominent display of the word ‘Merci’, followed by ‘produits de EarSonics’. My French doesn’t exceed asking directions to the bakery, but I can manage. The French card contributes to the authenticity, after all there aren’t that many European earphone manufacturers. 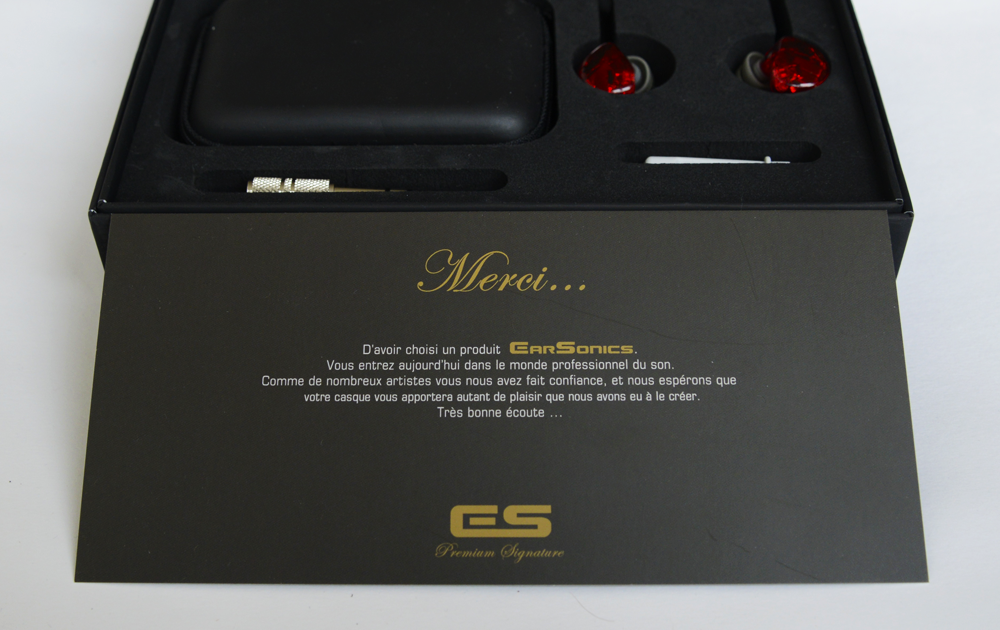 The accessories consist of an extra pair of the standard gray biflanges, a smaller pair of black biflanges, a large pair of mushroom tips and two pairs of foams. The carrying case is also matte black, compact and very stylish – I’ve been using the one I got with the Velvet on a daily basis for whichever iem I decide to pack. It fits exactly one iem (with upgrade cable), and its soft feel and edges are ergonomic in a bag or jacket. Finally, there’s a 6.3mm to 3.5mm adapter and a cleaning tool. 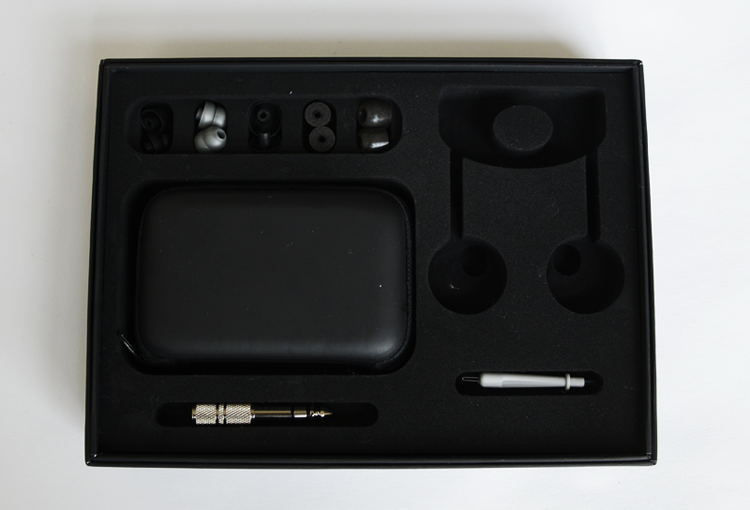 The S-EM6’ design consists of 2 large bass drivers and 4 small mid and treble drivers. The housing is larger than lower tier models as the SM64 and Velvet, but still smaller than the Solar or JH Siren Series. While it’s on the bigger side, I wouldn’t call it large overall. It’s built from the same acrylic material used for the EarSonics customs, and is available in the colors black, crystal, red or blue. This one is the red devil edition; a tralucent red, that allows you to see the drivers. The finish is good and has a premium feel to it. It appears to be one solid shape, there are no visible lines or screws making for a very smooth piece.

As it is a universal, both the fit and seal will of course vary over listeners. My ears are small to medium/small, and I consider them to be relatively ‘universal’ as I seldom have issues getting a good fit with standard tips. The S-EM6’ shells fit me well, and fill up a good portion of the ear. The standard EarSonics biflanges have a somewhat notorious reputation; they’re a bit hard at first, but soften up after a few days of use. For me they provide a vacuum-like seal, closing everything off, but bordering on discomfort due to the tight fit. But as a long time owner of the Velvet and now S-EM9, I’ve come to terms with the small price I pay for the seal and sound quality I get. The tight seal gives a solid bass response, which contributes to the fullness of the presentation. I’ve experimented it a bit with other tips in the past, but always came back to the EarSonics tips for their sound.

EarSonics iems come with a generic black 3-wire cable, with built in transparent memory wire. It has an industry standard 2-pin that fits flush on the shell, and terminates into a slender right angle 3.5mm jack.  The cable isn’t prone to tangling, and does not pass on any microphonics. For cable enthusiasts, from experience EarSonics iems generally benefit from aftermarket cables. Most noticeably bass control improves, lifting a slight veil from the midrange which in turn can benefit instrument definition and separation.

The S-EM6 has midforward signature with enhanced bass. The midrange is lush and engaging, while its treble is a bit laidback in comparison. The S-EM6 sounds big: due to the full midrange, tones are presented as pillars of sound, fortified by the bass. Despite the relatively thick notes, instrument separation is very good; the S-EM6 handles congestion well due to the excellent stage and imaging.  The same holds for detail retrieval, which is based on the imaging rather than clarity from a brighter signature.

The first bass-light EarSonics iem is still to be made; the company clearly values the intricate role of bass in the musical presentation, and has an excellent reputation to uphold. The S-EM6 is no exception; the bass plays a prominent role in its signature. The sub-bass has decent extension, but the S-EM6 gets most of its punch from the enhanced mid-bass. The mid-bass slam is powerful in bass heavy music. This becomes even more apparent when amped, although it trades a bit of control for power compared to something like the Empire Ears Apollo. The bass has a warm tone, and gives a great deal of warmth to the midrange. Bass texture is nice with slight decay, and the mid-bass displays good speed and detail. Overall the S-EM6’ bass portrays a high level of quality, and equally important, a very satisfying punch.

The S-EM6 has a very full, lush and warm midrange – this is where the magic happens. The lower midrange get its fullness and warmth from the enhanced midbass, but S-EM6’ midrange also has a great deal of inherent warmth. The center midrange is forward, and takes the spotlight in the presentation – vocals are its strong suit. The S-EM6 has no problems creating a clear center image. Both male and female vocals sound very dense and clear, with great depth; articulating the perception of sound being produced from the chest. The warmth gives it an emotional resonance, and vocals are portrayed with a sense of naturalness and realism. The same holds for cello’s that get that require a good deal of lower end extension to recreate a deeper sound, while electric guitars sound full and powerful.

The upper midrange is again quite forward, although slightly less compared the center mids. But it contributes to the excellent portrayal and definition of vocals, as well instrument. All together, the midrange is very full, coherent and powerful. The S-EM6 has good detail retrieval in the midrange, but based on its imaging rather than tonality. While all the detail is still there, it’s less upfront and ‘in your face’. The same holds for its speed; it can easily keep up with faster guitars, although nuances can be perceived as less apparent due to the warmer atmosphere.

The S-EM6’s treble is very smooth, and takes a slight step back to the midrange. The treble has a soft, warm tone and is never bright or piercing. High hats have good presence, but are never sharp or offensive. EarSonics has applied their trademark dip in the lower treble, which not only contributes to a very smooth sound, but is specifically designed to eliminate all sibilance and harshness. And this is saying a lot, because from my experience almost every iem I’ve had has some degree of sibilance. Some of the rare exceptions being the S-EM6’s smaller brother, the SM64, and the Sony XBA-Z5 for instance. I suspect EarSonics’ origins in developing stage monitors for musicians plays a role here.

The lower treble dip makes for a smooth presentation of electric guitars; it takes the sharp edges off the top, the ‘bite’, but this also results in a bit of less upper end definition. This is an area of presence where iems like the Dunu DN-2000J or Perfect Seal AR6 will have a bump to enhance detail retrieval. The downside of the dip is its effects on the airiness; the S-EM6 sounds big and full, but not particularly airy. It trades a bit of transparency for its smooth presentation; acoustic guitars for instance sound thick rather than clear, although still very emotive due to their tonality. The upper treble and treble extension on the other hand is good, providing the S-EM6 with good resolution. The prominent warmth in the signature has its effect on the treble; detail and microdetail are presented due to the resolution, they can get lost in the warm atmosphere. The treble has good speed and decay; the S-EM6 handles cymbals in faster jazz well.

The midcentric signature aides in creating a realistic stage: the S-EM6 creates a clear center image, the vocal is prominent in core of the presentation. The vocals in turn are flanked by the instruments, presented to the rear and side. The stage is about average in width, but has excellent depth and height; the overall space can be considered large.

The thicker note presentation can make the soundstage appear narrower, due to the relatively larger space instruments claim within the confinement of the total area. By contrast, something like the IE800 for instance has a recess in the lower midrange, which creates an airy soundstage which more space between the instruments – at the sacrifice of instrument size and fullness. It’s not a question of better or worse, the S-EM6’ full and warm midrange brings power and emotion to the presentation of genres like rock; while the IE800’s thinner midrange makes it highly suitable for disentangling complex musical ensembles with a lot of instruments in genres like classical or jazz. The S-EM6 is less prone to congestion as its thicker note presentation would suggest; the separation is still good with faster electric guitars. This is due to the soundstage size and quality imaging. Instruments are very clearly located in space, and can be accurately placed in width and depth.