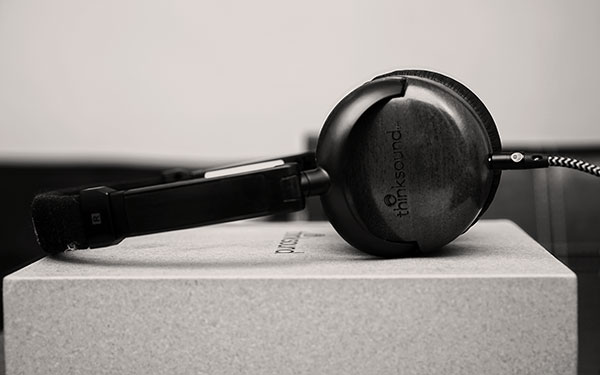 The Thinksound On1 Headphones are a brand new portable on-ear closed-back woody design priced for the mid-fi tier market at $299.

Disclaimer: The Thinksound On1 Headphones were sent to us is a sample in exchange for our honest opinion for this review. We thank Thinksound for this opportunity.

To learn more about headphones reviews on Headfonics you can click here.

Almost exactly two years ago I was asked to review a rather unassuming and humble set of woody earphones called the Thinksound MS01 and I remarked that I found them to be surprisingly well balanced and smooth earphones with a preference for vocals and detail over out and out thumping modern pop genres.

At $100 I felt then, and still do now, that they are a cut above the rest in the budget category. Well, 2 years later Thinksound finally unleashes their headphone project, the On1 to the market priced at $299 (now I believe a special at $249).

Overall, this is a much more ambitious project but interestingly I have to say upon a few solid listening sessions lasting several days there is plenty of the sensibilities heard in the MS01 carrying over to the larger woody On1. I can tell that those that liked the MS01 will certainly enjoy listening to the On1.

Naturally, Aaron and his team have stuck true to their principles in producing another eco-friendly headphone which I do admire a lot and wish a few other companies would try to emulate. That being said at $299 and on-ear it also places the on-ear closed woody On1 among some very stiff competition such as the Sennheiser Momentum, B&W’s new P7, and Beyer’s DT1350.

$299 is critical mass for many an avid headphone buyer, psychologically it is where things get serious for many so this is not a budget headphone, it should not get an easy ride but after some stiff testing among our national club members, I think Thinksound has very little to worry about in terms of likable audio quality. 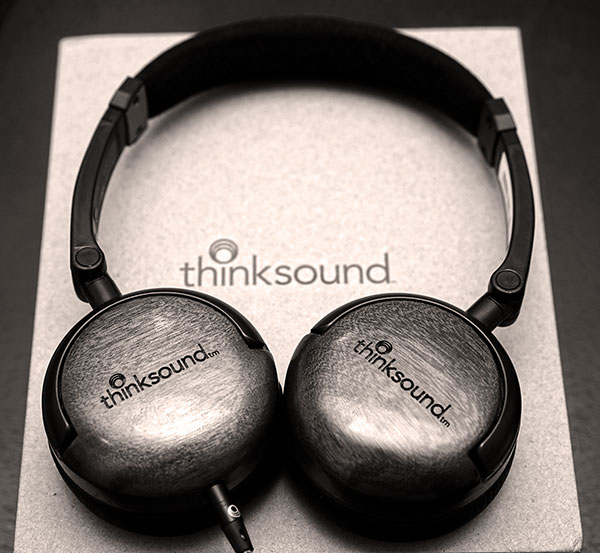 This is an on-ear woody. I have tried pretty much most of them and they either feel and fit great like the ESW9/11 or so so like the lead ball Fischer Audio 003 or just downright rubbish like the E-Smooth variants you see under one brand detail or another.

The On1 is firmly in the former camp of fitting great and on top of that has one of the best isolations for an on-ear I have yet to try. After a few hours there was only a minor level of sweat and a feeling of some slight pressure build-up but other than that the balance feels very well displaced with little or no top of the head pressure and just the right amount of clamp on the ears for above-average isolation. It is indeed a comfy little fella.

It is a looker also, to be honest. I wished the band and gimbles where leather-wrapped solid metal but perhaps this didn’t quite fit in with the eco-philosophy and the added weight might have made the whole thing slightly less comfortable.

The wood cups are professionally finished with some excellent grain but I am not overly sure about the type of wood used as it is not mentioned but similar in finish to the ATH ESW range, perhaps Mahogany but don’t quote me on that. All I know is it is listed as sustainable and natural.

The headband itself is wrapped in a cloth type material and the rest of the construct is made from stiffened plastics which again I am going to guess are made from recycled materials. The pads themselves are pleather memory foam and have a high degree of seal and comfort.

Unlike the old ESW9 pads which never quite sat comfortably with me these really do seal much better. Your mileage may vary but unless your Spock or Bugs Bunny I can’t see too many people disagreeing with that.

One slight curiosity was the single-detached cable setup with it running from the right cup rather than the normal left cup setup. For most this not a big thing to be honest but it is slightly unusual.

The package does have two Kevlar-reinforced cloth coated cables (one with mic and one plain) that retain absolutely no memory whatsoever but do have a small amount of microphonics that is slightly more noticeable before you push the volume up or during silent periods of playback.

I wouldn’t get hung up on this, to be honest as the tangle-free qualities of the cable pretty much means you are hardly going to be playing around with it after the initial setup.

Outside of that, you get the usual nifty little eco pouch for carrying them around and all packed in a tastefully designed and simple recycled cardboard box and minimalist sleeve. 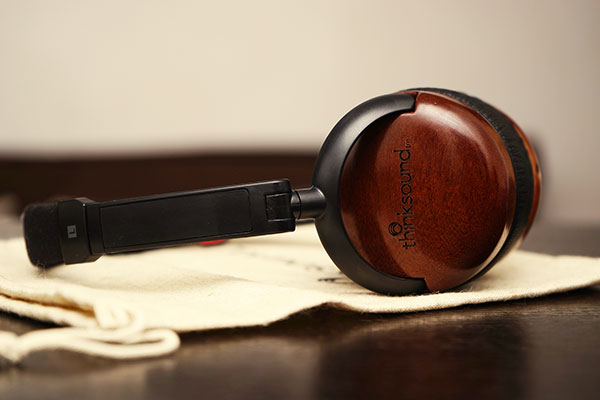 The Thinksoudn On1 is a woody, a closed on-ear woody at that, so my initial apprehension was that it would be warm, bassy with iffy isolation – something akin to the ESW-9 but with a smaller soundstage and heightened mid-bass. Boy was I wrong on that one.

The On1 is actually a very well engineered headphone that, much like the Ms01, has its roots in a largely neutral tonality with a hint of warmth, a smooth attack, and with just enough modern tuning to make it appeal to both bassheads and audiophiles alike. There is no extreme with the On1, just a really common-sense approach on how to get a headphone out there that can respond pretty well to almost anything that is thrown at it.

That flexibility is largely due to the On1’s relatively balanced mids section, an articulate, detailed and well extended treble response and just enough of a mid-bass hump in the bass section that remains very tight and controlled giving the whole presentation a reasonably nimble feel without ever being considered too bass shy or too hot in the highs. The whole presentation feels very coherent.

The extension in the bass itself does go down pretty far but in terms of accuracy, I didn’t find the bass leaking into the mids in such as a way to drown out the vocals or have them competing against each other.

The lack of boom or an eternally muddy bass response on the On1 is a far cry from say the V-Moda M100’s bass tuning so hats off to Thinksound for reigning in the bass and allowing the rest of the headphone to shine.

The On1 takes quite the opposite approach to the ESW9 and some other woody cans when it comes to treble reproduction. The On1’s treble extension is well above average with plenty of sparkle though in the wrong source this sparkle can slide into a touch of unwanted sibilance from time to time.

Dash Berlin’s ‘Go It Alone” was a good example where the On1 top-end displayed some unwanted sibilance on the female vocals straight out of a Classic 7th Gen over the much smoother FiiO X5.

What I enjoyed most about the MS01 carries through also on the On1 and that is the excellent degree of accuracy for an on-ear headphone and attention to detail. Whilst the expansiveness of the soundstage stays somewhat limited the clarity of the imaging was well above par for an on-ear.

Caveat Emptor though, trash in and trash out really applies to the On1. It is not the most forgiving on compressed tracks and bad recordings. Do not be fooled by that woody warm inviting exterior, the On1 is most definitely a monitor-like experience with some woody benefits but not enough for it to hide crappy source recordings.

With a largely neutral but smooth tonality matching might make the difference between a good experience and a stellar experience. Being relatively easy to drive headphone the On1 didn’t have too many challenges hooked into most modern audiophile DAPs.

The X5, the HM-901, and the AK100 all drove the On1 with considerable ease. But in each case, there were subtle but noticeable shifts in the tonality due I suspect to the inherent tonality of the source and amp shining through.

So for the HM-901 using the IEM card, the On1 came across as much more analog, warmer and thicker and with a more grounded bass but with the AK100 the On1 sounded a touch more digital, cleaner but with slightly less bass extension, slightly thinner sound and a bit more top end sparkle though with a higher degree of sibilance coming in.

The X5 came in somewhere in the middle of the two but slightly less resolving than both the HM-901 and the AK100. Even out of the humble iPod Classic 7th Gen it sounded relatively smooth and balanced though at times I felt there was a slight loss of dynamics and a slightly more congested sound stage than the higher-end DAPs.

The On1 does stack up pretty well among its direct competitors also. Compared to the On-Ear Momentum the On1 is much more coherent and balanced giving it a much wider degree of flexibility and conveys a lusher and less grainy presentation than the Beyer DT-1350.

Directly compared to the ATH ESW9 there is much to like with both at the bottom end of the frequency but the On1’s top-end detail is more dynamic and lively than the more shelved down feel of the ESW-9.

The Beyer T70p’s has by far the more detailed and controlled treble response with almost zero sibilance but at the cost of having no bass presence to speak of compared to the weightier On1 unless it is fed in artificially from a bass boost or EQ. That is testimony indeed to the On1 competitiveness.

The Thinksound sells for $299 SRP but the street price is now around a more tempting $250. It is well worth its price actually and a demo if time permits in the stores because they are far more accurate, engaging, and “audiophile” than some of the more fashion-conscious meme-driven cans on the shelves in today’s market.

Wood always has a special place in my heart but a coherent and balanced tonality and presentation are usually the essential ingredients in a headphone that makes me want to use them again and again.

How it will fare against the big boys in the market is hard to tell but the MS01 thrived and I suspect given the Thinksound marketing team’s usual dynamic approach the On1 will sell relatively well also.