The M5 DAP By Shanling

ESS Sabre was THE DAC of 2014-2015 for quite a lot of audiophile gear makers from DAPs to desktops. However, this chip series can be a nightmare to work with and if not properly filtered and implemented the results can be harsh. I have seen just as many bad ones as there are good ones. Now, all hail Asahi Kasei and the rise of AKM DAC chips for 2016, particularly the AKM AK4490 which is I am starting to see in a huge amount of gear from the AK380 to Cayin’s N5 and the new i5 and now Shanling’s new M5 flagship DAP. Why all hail? It is cheaper, easier to design and roll out and generally speaking produces a more forgiving and musical reproduction that sits well with the vast majority of users.

Shanling are no mugs when it comes to DAP making. This is their 3rd edition and, generally speaking, each one of their previous launches has built on a vision and design flow stemming from the original M3 which we reviewed back in January 2015. Though using a common shared Linux based GUI software shell themed specifically for Shanling the M3 stood out with its very unique lighter themed design with a central control command dial mounted on a 360-degree stalk on the top right-hand corner. Though in practice it was slightly awkward to use given the huge size of the M3 it was an eye catcher and pretty decent sounding DAP to boot.

I skipped reviewing the M2 purely on a crude theory that 2 is less than 3 but I did observe the more refined styling and the wheel now integral to the chassis than sticking out. It certainly looked more useable than the M3 but it did use the same CS4398 as the M3. Now you can grab it for $199 on Amazon which looks like a bargain to me.

The M5 is their top of the line DAP and uses an all new DAC, the AKM AK4490 which, as the opening para of this review stated, is probably the rising star of DAC chips in use by audiophile DAP makers this year. It also sports the new M2 physical profile only this time with a larger and more expensive 3” IPS HD screen over the smaller and cheaper 2.35″ TFT LCD used by the M2. Decoding rates are up (384kHz / 32bit), functionality has increased and a bigger battery has been thrown in. The M5 is a really a pitch by Shanling for the mid-fi market currently dominated by the likes of Cayin, FiiO, Onkyo etc. It also doesn’t cost the earth with an MSRP of $499, which is about $100+ less than leading flagships such as the Cayin N6, FiiO’s excellent X7 and the Opus#1 by The Bit.

Smaller, lighter, more streamlined – watch words that come to mind when comparing the M5 to the original M3. If the M2 pointed the right way to a modern looking non-touch DAP with a dash of difference, then the M5 really embraces it. The M5 strikes a nice balance between size and legibility also with an improved and larger 3”IPS HD screen housed in a solid aluminum chassis (black or silver). This is a big upgrade over the smaller 2.35″ TFT screen used in previous iterations of the M series though it is still not a touchscreen variant.

My one complaint before with the M3 was that huge amount of moribund space on the front panel doing nothing and Shanling seem to agree with the bigger screen now dominating the front panel. Viewing angles are excellent also on indoor light with rich saturated colors and a screen protector that comes with the package as standard for additional protection. 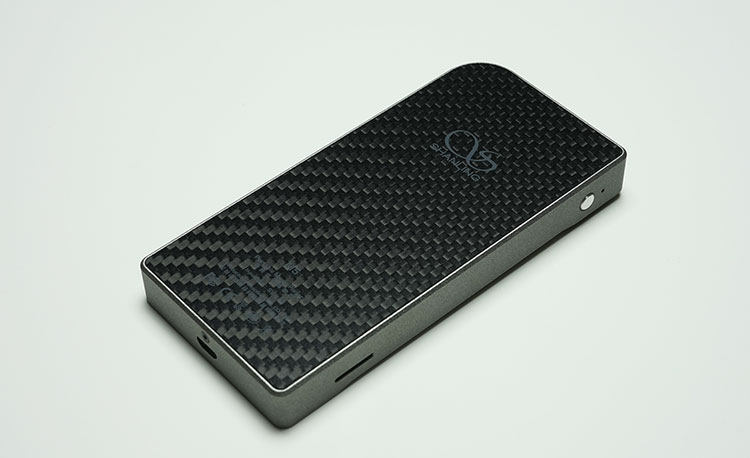 Much like the M2 and unlike the M3, the M5 pulls the previous joystick-like command wheel into the actual chassis completely rather than sticking out slightly like a camera manual dial. The command wheel also duals up as a rotary analog potentiometer for volume control. Resistive downward swipes left/right and up/down give you control over navigation/menu selection and playback options. It works in much the same was as the M3 dial but the integration into the casing offers a more assured and solid feel and the rotary pot is much easier to use than before.

The center as before is the confirm button, however, the M3 confirm button is convex in shape rather than concave and it is not physically part of the central wheel molding. It is an independent mechanical component in its own right which makes its far more accurate to use than the older M3 confirm button.

If you have handled the M2 then the M5 panel I/O and command controls are very familiar as in they are the exact same in terms of layout. If you are jumping from the M3 to the M5 then you will find the additional I/O moved from the bottom to the top and more intuitive to use than before. On the top panel you now have two 3.5mm jack outs. One that doubles up as a line out and coaxial output for system integration using the M5 internal DAC and one 3.5mm regular headphone jack out that  sits to the far left. 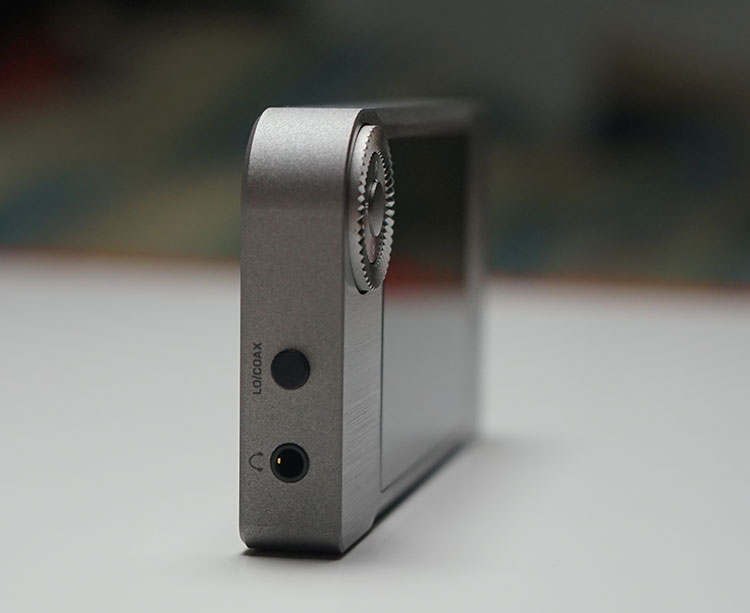 The bottom I/O is similar to the M2 but stepped down from the M3 which housed all the I/O such as line out and coaxial at the bottom. You now have a single micro-USB slot that triples up on charging, DAC out from PC or MAC and also OTG. Yup, that is right, OTG for Android which will be a nice boon to smartphone users who want a high-end DAC and decent amp. I can even OTG the M5 to a FiiO X7 (becoming a transport) which is hilarious in a geeky way. Kudos to Shanling for unlocking that feature since they do use a version of that common Linux framework software used by other companies such as Cayin (N5/N6) and FiiO (X3ii, X5ii). 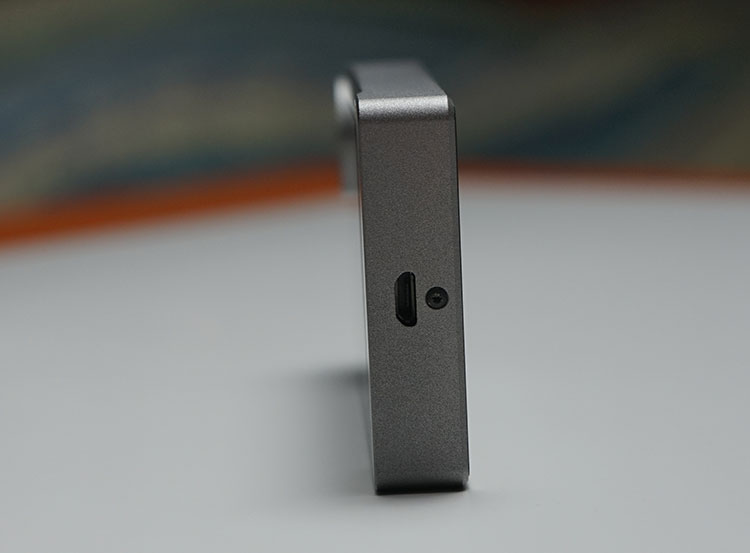 The M5 side panel I/O is the same as the M2 and quite different from the M3. The layout is now far more user-friendly and consistent with more modern DAP designs. On the top left is the reset pinhole close to the power on/off and LCD screen on/off button and closer to the bottom left is an uncovered micro SD slot. The right panel is flush with no functionality. Previously on the M3 the microSD slot was on the bottom panel and the power button close to the command dial on the front panel which felt a lot less integrated than the M5.

The M5 packaging is similar in style to the M3 with a rectangular small simple black box that opens up to a foam cutaway housing the M5 itself. Underneath you get two screen protectors though sadly one is not already applied to easily peel off and go. You will have to do that yourself and man I suck at that. Aside from those, you also receive a micro USB to USB A cable for charging and data transfer, a coaxial adapter cable, a small USB stick and a warranty card plus user manual. No silicone or leather case comes with the M5 which I am told they are working on releasing. I do think a case of some sort is required and would welcome the inclusion of one in the box as standard given the price of the M5. 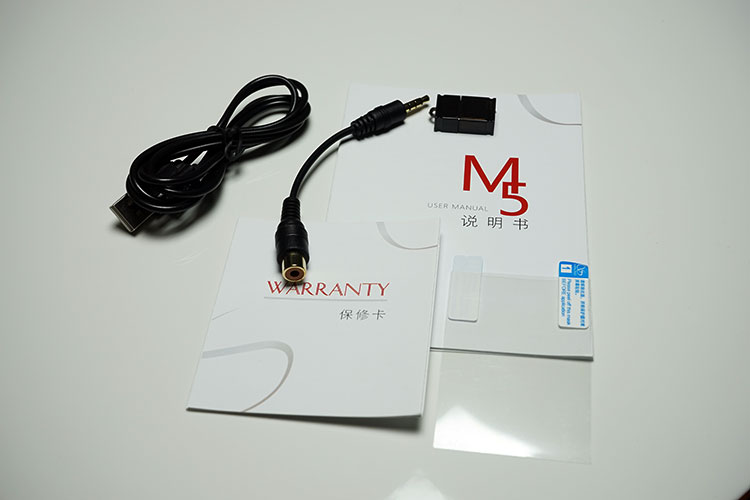 The M5 packs a 3400mAH lithium battery which will give around 8-9 hours in real life and a quoted time of around 9 hours on the spec sheet. The higher the button mashing, decoding rates then the battery life will decrease. The compares favorably with most mid-fi DAPs with the Cayin N5 quoted at also at 8 hours but with a larger 4200mAh battery, the N6 at around 8 hours though the X7 edges ahead with the IEM module at 10 hours on a 3500mAh. The AM2 and AM5 X7 modules drain a lot harder and come in up to 30% less than the M5 with the powerful AM5 module.

Note it does have a standby option (up to 20 hours) by pressing the screen off. The battery will drain pretty slowly and it is not uncommon to pick it up a day or two later and still have good reserves to get a session out of it. That does mean though if you want to actually turn it off you have to press long enough to see the power down screen or it will go on standby mode without realizing it.

It’s the AKM AK4490 and by all accounts those vendors whom I have spoken to have praised it for being a heck of a lot easier to work with than Sabre ESS DAC’s despite their undoubted prowess for details and neutrality that many audiophiles love. AK4990 is being chosen for its known ability to sound a lot more forgiving and give a little tweak towards warmth and musicality.

On balance, that type of profile is usually easier to embrace than cold neutrality and works for a lot more genres than the ESS. I have heard some great implementations of the ESS9018 but the amp really needs to be up to the task. For instance, the X& uses a full-scale ES9018, the big daddy of Sabre chips but with their AM1 IEM module, it sounded a bit flat though detailed. Roll on the AM5 and it’s much more aggressive and colored. The amp can make a difference.

There is, of course, the cost factor and comparatively speaking Sabre chips do cost a lot more to procure and implement than AKM chips. The upgrade on the original CS chips used in the M3 is obvious with DSD native decoding, far lower distortion rates and excellent levels of power consumption. It’s an ideal DAC chip for DAPs.

The M5 uses a number of combinations including a JRC MUSES8920 opamp for filtering and an AD8610 for voltage amplification. The MUSES8920 is a variant of the MUSES01 and is an excellent performing chip for very low distortion and noise rates. Analog Devices are also a highly regarded chip maker, Schiit being one who just adore AD for their multibit DAC chips. The AD8610 voltage amp is known for low current noise performance even on fairly heavy duty loads. Shanling top their amp stage off with a BUF634 buffer used primarily for current amplification whilst helping to reduce thermal feedback within the circuit design as well as improve the capacitive load drive of the M5.