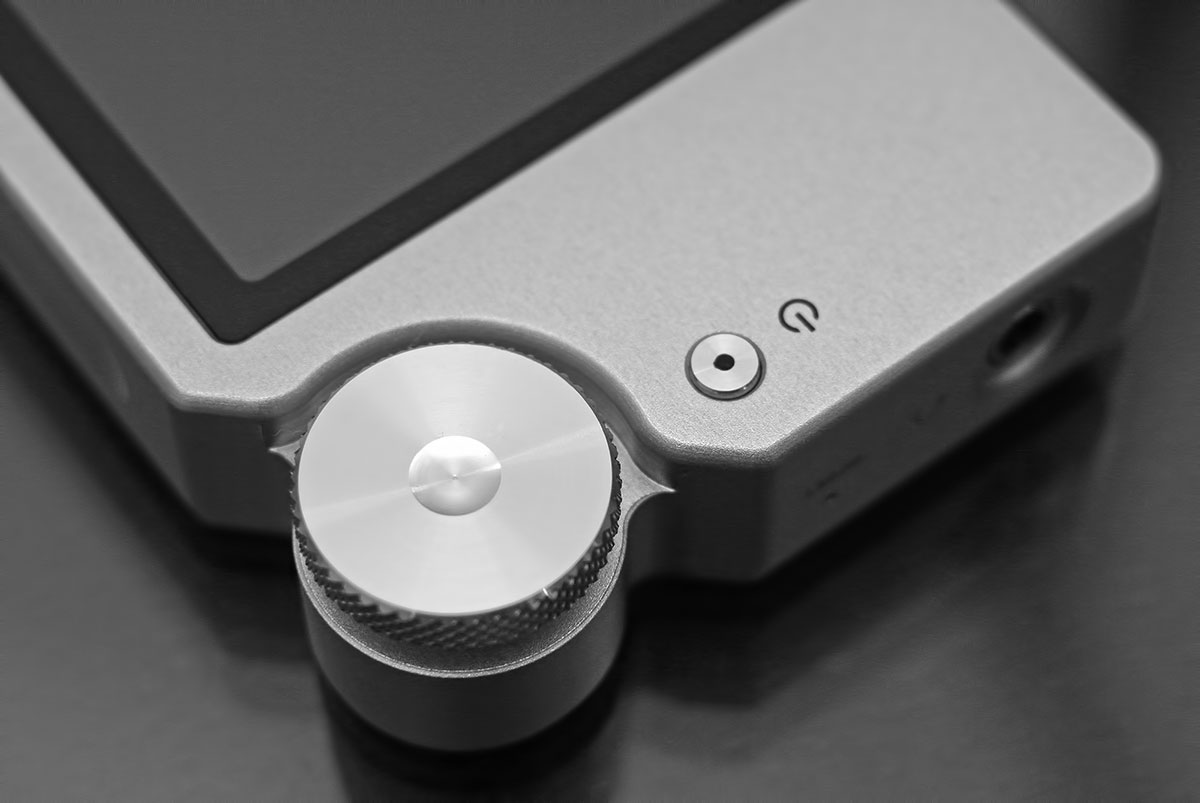 The M3 DAP by Shanling Audio

Shanling Audio have been on the go now for nearly 27 years and are very well known (at least in SE Asia) for their impressive power amps and desk top audio in general including DAC’s and CD players. Much in the same vein as Cayin in 2014 Shanling have decided to target the more portable market and the new M3 DAP just out is part of that new strategy. And just like Cayin’s N6 the M3 DAP is nothing like what you are used to seeing from DAP makers.

Chinese companies have this unique flair when it comes to design sometimes and the M3 is no exception. Retailing for around $350 (depending on where you buy it), the M3 can be purchased direct from Shanling or via its official distributers. They do not have the most comprehensive of reseller networks outside of China but well known Chinese national sites such as TaoBao have them for sale as well as sites such as Musica Acoustics and China-hifi-audio.com. To the average Western audience much of these DAP’s are therefore largely unknown quantities which require a heavy departure from the standard thinking of how to use a modern DAP. I can’t imagine you finding one for demo in your local Best Buy or even a reputable hi-fi seller due to distribution channels being a bit limited.

That is a shame because once you get into the thinking of how to operate and use the M3 it really is quite a performer and competes very well indeed sound wise with the likes of the DX90 and X5, which I would consider to be its current peers or competitors. It also works as a DAC from your PC/MAC in much the same manner as the X FiiO and DX Ibasso series of DAP’s. Ironically both these peers are Chinese DAP’s as well, yet we have ceased to think on that basis. Savvy marketing divisions that have found a way to bridge that cultural and distribution divide in the last few years have resulted in these DAP’s popping up in just about every local store you can think off.

The M3 packaging has echoes of Astell & Kern which, comparatively speaking, is a good thing given AK is now seen as one of the flag bearing luxury DAP makers in the market today. The box is decidedly black and about roughly the same size as the original AK100 box. When opened you are presented with a simple foam cut out holding the main M3 player and underneath the top layer of the foam insert is a spare USB cable (micro USB) for connecting to charge or hooking up the M3 to use as a DAC/AMP as well as your warranty card and a simple manual (Mandarin at the time of writing but with helpful image guides). There are no other secondary cables or a case, that is your lot so to speak. Given the fact the M3 is a rather an unusual shape I would have hoped for a simple case to protect it because accessories like these are going to be impossible to find to be honest. Fingers crossed Shanling start to offer cases like FiiO and Ibasso for the M3. Though absent also, screen protectors are relatively easy to cut and shape so that is not an issue for me personally.

Did I say unusual design? Yup it is that and possibly one of the most eye-catching to date I have used. It is not as svelte as the iPod Classic, as small as a DX90 or as well machine drilled as a FiiO X5 but what will draw your attention to most is the top right hand corner of the unit and the unique jog dial control and menu access hardware system. It looks like a huge Zippo lighter; in fact, it was probably designed to look like a huge Zippo lighter. In a world dominated by “offended on your behalf” politically correct madness I tip my hat to any company that designs an audio device after any sin tax secondary product without batting an eyelid. I believe Echo Box are aiming for a whiskey flask with their DAP this year also so Shanling are not on their own.

The M3 is roughly around 10% bigger than the FiiO X5 being around 5mm taller and 10mm wider. It comes in two colors, black, and silver. The overall size places the M3 on the larger side of commercially available high-end DAPs with the AK Mk1 series still to my mind being the smallest form factor outside of the FiiO X3. The M1 is made from a metal construction rather than plastic materials that feels pretty solid if a little moribund in terms of chassis contouring and physical ‘knobs and whistles’. 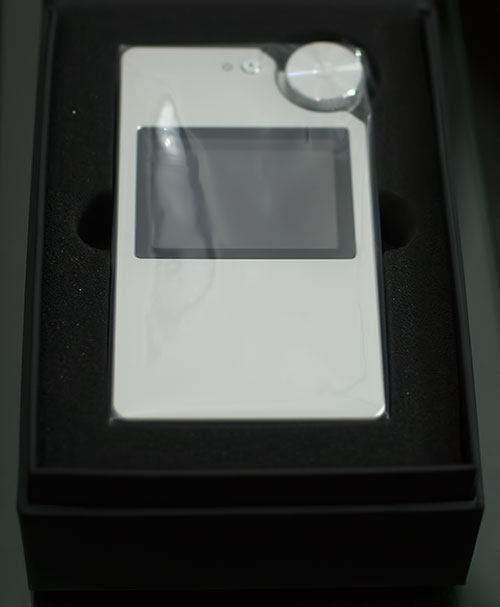 The front panel is really quite blank of any physical control features apart from the top half which has the LCD screen, the power button and the command dial which doubles up as the volume pot. The top panel of the M3 has the 3.5mm headphone jack and a tiny reset button (which I have yet to ever use!) and the bottom panel houses the rest of the key functions of the M3 namely the memory card slot, micro USB charge/DAC connection and two digital/line in and out 3.5mm inputs. The memory card slot, much like the FiiO and Ibasso DAPs is a single MicroSD slot capable officially of up to 64GB in FAT32 and exFAT format. The 3.5mm input to the far left can take a line in from another source as well as receive a SPDIF connection. Conversely the right hand side can output a line out or SPDIF connection to another source. 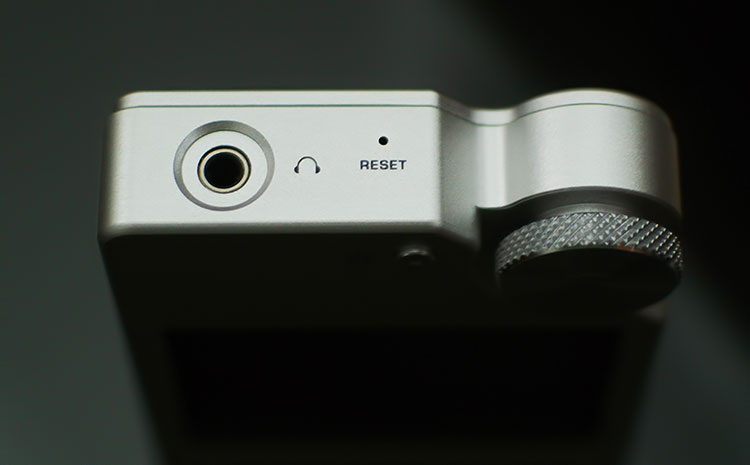 The 3.5mm headphone jack is not the new ‘snap-in’ type you get from FiiO on their X5 or Ibasso on the DX90 so headphones and earphones can be pulled out with relatively minimal pressure. That is either a good thing or a bad thing depending on your point of view. A tight ‘snap-in’ can lead to increased pressure on the stage chassis that can lead to some damage if not implemented well or excessive strain on your jack if you are pushing in a huge jack constantly but it does mean it will not fall out unintentionally. The M3 jack, whilst not a ‘snap-in’ doesn’t fell like it will fall out at any time but it is something to be aware of. It is a more traditional 3.5mm jack input you could say.

You can either call it that or a jog wheel as its both a volume pot that turns in the normal fashion and a multi-directional jog dial that controls the menu or operation of the M3’s menu system. It takes a little to get used to the dial as it is rather a complex beast but hardly unintuitive. The M3 screen is not a touch screen like the Ibasso or AK range nor does it possess standard physical buttons to the front or side so this is the only area of the unit that can you can interact with. The volume pot is a stepped attenuator pot with decent resistance and increments of 0-60 steps on the UI. If you move it step by step it will go up accordingly one level at a time but dial it fast and the steps become a little less accurate. The rest of the functionality and interaction with the UI is controlled by up/down/left/right and press down on the command dial.

It does feel a little like you are about to flame up on a lighter but I guess that is the whole point. Give its top right side positioning I get a feeling left-handed people might find this dial a little bit more difficult to operate than right-handed people using one hand as your left hand is likely to be covering the LCD screen as you try to navigate. In my right hand I always felt I had a little bit more poise and control over the dial. I do wish that the M3 had a further set of standard playback buttons on the front panel. It seems to be crying out for some action on that smooth metallic exterior and as a gesture to left-handed people or those with smallish hands it might be a bit of a boon in the long run. The jog wheel does have a tendency to be a two-handed affair whilst using the command dial.

The M3 battery measures up pretty well with its competitors at 10 hours in between charge cycles. The M3 uses a 3600mAH rechargeable lithium polymer battery which is lightly smaller than the X5’s 3700mAH but considerably larger than the DX90’s 2100mAH mobile phone battery equivalent. That puts it even with the FiiO X5 (under optimal conditions) and around 1.5-2 hours more than the DX90 from Ibasso. The battery however is not user replaceable like the Ibasso battery and the charge times seem a little long compared to the FiiO coming in at 6 hours using a 2amp wall wart and even longer at 10 hours using the USB compared to the X5’s 4 hours.

The M3 DAP houses a Cirrus Logic CS8422 and a CS4398 DAC chip for decoding and a Texas Instruments OPA2604 for low pass filtering of the signal out to left and right BUF634 buffers and Analog Devices AD8610 JFET input amplifiers.

The CS8422 acts as a asynchronous sample rate converter for the SPDIF signal allowing up to 24bit depth and at the same time reducing levels of jitter in the digital signal input. This filtered signal is then fed into the CS4398 chip for conversion to analog. The CS4398 DAC chips allows the M3 to handle resolution up to 24-bit/192 kHz both from USB DAC and SPDIF input and given its sensitivity to low jitter rates and should be a good match for the CS8422 if implemented correctly. The AD8610 is also known to be a fast paced energetic performer with a clean tonality and the CS4398’s presentation is usually a bit more forward with a touch of warmth especially in the midrange and with decent levels of gain.

Given their home hifi heritage I am not surprised Shanling have opted for the CS8422 as it can be found in a lot of desktop components and high end CD players. Shanling have also used Cirrus Logic and Analog Devices chipsets quite a lot before in their own desktop units, the Shanling AV1.2 Bluray system being one of them and the Shanling H1.2 DAC being another that uses the TI OPA2604 chip set.