The tonal presentation of the HDACC is relatively neutral though not as razor flat or analytical sounding as say the Oppo HA-1 or the DAC-10 from NuPrime which uses the ES9018 chipset. There is a very slight hint of warmth in its presentation that gives it a clean yet natural tone that actually comes across as very balanced sounding right throughout the FR.

Bass is linear rather than colored and very responsive even with more taxing loads such as modern planar headphones though it will lose a touch of texture and dynamics with the most demanding such as the HE-6 but otherwise, it’s snappy, clear, and very spacious sounding.

It is not as full sounding as the Mojo, nor as warm and wet as the Continental Dual Mono but certainly a little meatier and musical sounding than Hugo‘s low end.

Instrumental separation is excellent and timbre is overall very accurate. There is greater attention to micro-detail and precision than overt musicality so, on the one hand, you will get a beautiful level of refinement but on the other hand, you will not get anything you could describe as euphoric, rich, or wet sounding.

Vocals are excellent, sibilance is kept in check nicely. The HDACC really prefers to give you a fairly transparent and coherent presentation in that respect with perhaps a bit more energy and forwardness in the upper mid to lower treble range that is not entirely inconsistent with Sabre chipsets.

What I am delighted about is the lack of Sabre glare in the HDACC presentation, particularly in the treble performance. It is not overly soft, it does have a touch more energy, but neither does it have those awful sharp edges and metallic tonal quality you tend to get in some poorly engineered ES90XX implementations.

Staging wise it has solid depth and width and offers plenty of headroom depending on the headphone you pair it with. It will only start to lose dynamics and sound a touch compressed if the current demand cannot match the pairing such as the HE-6 where it loses a bit too much extension either way and the sound tends to fall in on itself and become way too center focused. 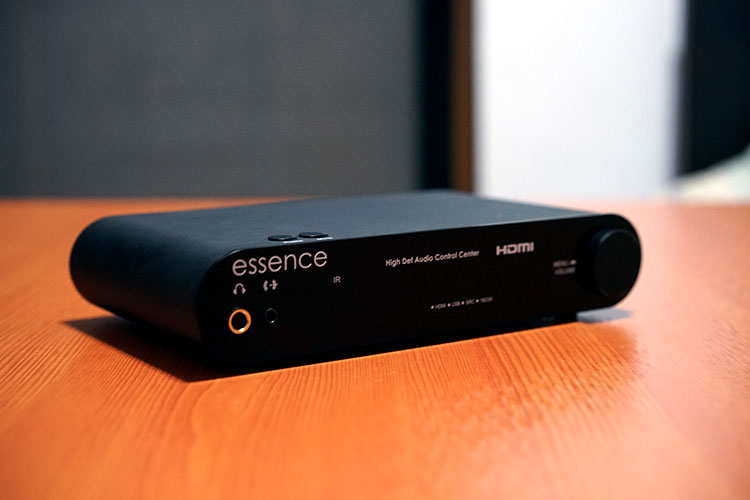 Line-in with the HDACC was excellent and though to a degree, the final quality will depend on your line-in source I did get a clean, coherent, and natural-sounding presentation with a wide range of DAPs such as the FiiO X7 and in particular the excellent line out of the Paw Gold from Lotoo.

Other sources such as the more musical i5 brought in more low-end girth. Upsampling on standard 44.1k tracks and MP3s also brought in a nice level of smoothness and refinement to the treble response, particularly with revealing headphones such as the Ether C or K812.

Dual RCA unbalanced out was mercifully color-free also with the option to operate as a fixed level line out or variable level pre-amp depending on your preference.

The volume control on preamp duties was very smooth and controlled with my Sustain84 tube amp on high-gain with the Ether C. It doesn’t quite have the warmth and musicality of NuPrime’s DAC-9 unbalanced output with its AK4490 chip but it does have slightly superior resolution and micro-detail retrieval.

Using XLR outputs the HDACC doesn’t quite have the warmth and musicality of say the old Just Audio 2496 uDAC (dual WM8741) which frankly is still impressive 3 years later but it is far more resolving and coherent sounding. If you want fun strapped onto your amp of choice grab the uDAC, otherwise, the HDACC has it licked for detail.

It does not have the dynamic range of the Schitt Gungnir’s XLR (dual AKM4399 DAC) which has around a 6-7dB superior SNR performance with A-weighting and white noise factored in.

This is particularly so when a balanced connection to the almighty Mjolnir balanced output SS amp which is technically a ‘bed buddy’ so it might be an unfair advantage. Instead, the HDACC presentation (with the Mjolnir) pulls it back in a bit in favor of a calmer balance but still retains that overall neutral flavor. 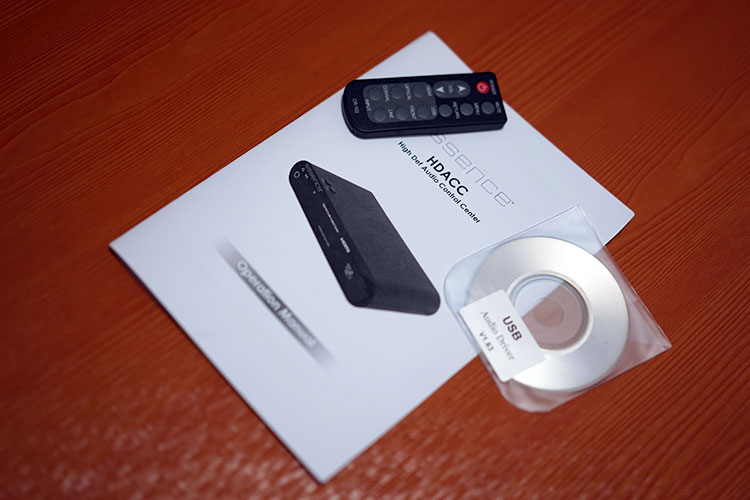 Whilst a few IEMs came out quite well such as the hybrid Fidue A91, the planar oBravo ERIB-5A, and the single DD CA Vega, the HDACC’s power is really more suited to less efficient headphones with 32ohm and upwards. Volume wiggle room was good with a -50DB span for A91 and Vega -80db to -30db) and channel balance was impeccable.

However, noise levels on the HDACC are not in its favor for IEMs. You won’t get dead silence on IEMs like the Vega and A91, the gain level is a bit too high even at -80dB. On super sensitive BA designs such as CA Andromeda, SE846, and the 64Audio VE6XC hiss and high noise levels were evident.

Clean, clear, neutral sound, allows the AKG K872 free reign to show off its much improved and more controlled treble response without any “Sabre Glare” I tended to find on 9018 DAC’s such as the Oppo HA-1. No issues on power, easily driven at around -10 to -15dB, no clipping or distortion on a 32-ohm load.

It doesn’t have the chops or the voltage to really get the HE-6 moving.  Volume is all the way up to 0dB and could probably do with about another 5-6dB easily.

Whilst the sound itself is actually quite smooth, more so than a few other underpowered amps I have heard with the HE-6, it really lacks the dynamics due to the lack of power from the HDACC. You won’t experience any horrible distortion or clipping but neither will you get the energy and extension at either end I know this power-hungry planar is capable of.

A relatively efficient planar that still pushed the HDACC a touch at -12dB but still yielded excellent results. The HDACC simply stepped out of the way and let the PM-1 do its thing with no unnecessary coloration and excellent levels of transparency and detail which is a good thing.

Anything too warm and the PM-1 would have fallen over itself in a bucket of molasses in the process. Instead, the PM-1 sounds as snappy as it can be with a weighted but not bloated low end, rich and vocal-centric mids, and a relaxed top end.

Another planar that didn’t fall by the wayside with the HDACC sitting just fine at -10dB. Tonally an excellent match with great detail and above-average levels of clarity. If the music required a bit of low-end weight the HDACC delivered it.

At no point did I feel the Ether C struggled to produce good dynamics with the HDACC. It may not have the searing detail and precision of say a Hugo DAC but it had a touch more smoothness and didn’t sound quite as lean. A very natural sound indeed.

A super-efficient 32-ohm dynamic headphone that the HDACC lapped up with consummate ease sitting very nicely indeed at around -22-4dB. Again, the neutral yet natural tonality of the HDACC shone through with the 99 Classic keeping it clear of any muddy low-end responses and throwing in excellent clarity and detail with a black background.

You do get a slightly more neutral and cooler midrange and a snappier, slightly harder-edged treble presentation than you would get from warmer sources or tube amps but it still sounds relatively easy on the ear. 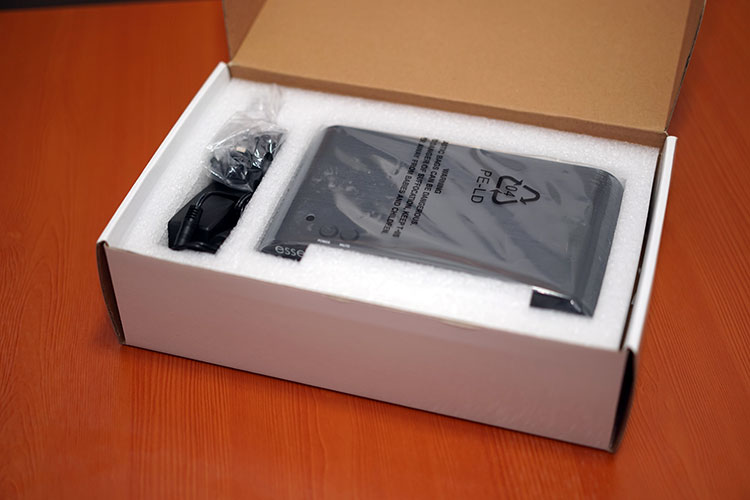 Since this is part 1 of a 2-part review I will reserve overall final judgment until we have completed the HDMI functionality and performance.

Now, of course, this is late 2016 and in some ways, the HDACC as a traditional digital component in a system setup is not the latest and greatest in terms of technology.

There are Sabre-packed DAC’s out there that can resolve at a far higher level (DSD, DXD) with lower noise levels and more efficient outputs in this day and age. That is understandable given the last few years of higher efficiency planars and IEMS but none of them have HDMI capability and if they do they cost a heck of a lot more.

As far as traditional 2.1 desktop amp/DAC’s though I can’t really fault the HDACC for what it does. Tonally it is excellent, far better engineered than quite a few ESS chip-based DAC/Amp’s I have reviewed in a while.

I get no Sabre glare, distortion is wonderfully low, dynamics are pretty good and outside of the old HE-6 pretty much most modern planars and dynamic headphones sound great.

Inputs and outputs are plentiful also. Balanced out, unbalanced in/out, line-in, optical and coaxial as well as USB and traditional quarter headphones out is a very strong compelling argument for putting the HDACC in the middle of your system.

If you are a solid FLAC and MP3 user the HDACC will pretty much handle everything smoothly, upsample where needed and desired, and give you a very nice smooth yet neutral tonal quality.

The icing on the cake must now surely be HDMI. We can ‘hum and ha’ all we like about the lack of DSD but if you are a physical disk lover then it is quite possible this is a moot point. With HDMI the watchwords are now uncompressed audio ala DTS-HD Master and Dolby TrueHD and the HDACC’s ability to decode it. Watch out for part 2 of the review on that.