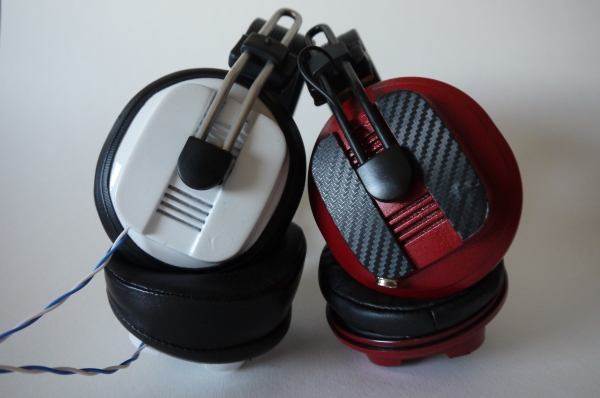 Zach has stated that his goal in these mods is to get the T50RP to sound as close to the Hifiman HE500 as possible. Luckily, I happen to have reviewed the HE500, albeit two years ago, so I have a frame of reference. I distinctly remember loving its enveloping sound signature; it was vocal-heavy, had more than enough bass for me, and treble that was slightly forward, but not scathingly bright. Though I did have one complaint: the upper midrange had a bit of a peak then a dip, which made them sound slightly echoey. Mr. Mehrbach has, at least to my ears, achieved most of his goal, which is remarkable considering the HE500 costs $500 more than the basic ZMF.

The bass is quite impactful; no surprise there because of the serious seal the HM5 pads give. I’m actually quite surprised at the quality of the ZMF’s bass. It’s almost as beautifully textured as I remember the HE500 to sound, and completely blows away the other full-sized $200 closed headphones I’ve used, like the AKG K550, Audio Technica A900X (though the A900X seems to hover closer to $100 these days), and not to mention the Beyerdynamic DT770, which the ZMF shames in terms of details. Upright bass sounds stunning, as I can almost hear the bow hairs scrape across the strings. It can’t quite match the level of detail I remember the HE500 having, but honestly, I have to strain to find problems. The Classic is also quite adept with synthesized bass. It’s not as fast as my Sony SA5000, so it hasn’t superseded it for my electronic listening, but it’s fantastic with the bassy EDM my SA5000 stumbles to recreate.

While bass may be the priority of many headphone listeners, the midrange is Zach’s preference, so he spent immense time trying to refine the midrange as much as possible. As the midrange was the HE500’s specialty, it’s the ZMF’s highlight as well. It’s forward, but since the bass is slightly above neutral, the lower mids are warmed up. Paired with the slight dip in the upper mids, the midrange is given a romantic texture, not unlike the Audio Technica ESW9, but less woody-sounding and clearer. But it’s a bit of a double-edged sword, as I found the sound to be a little too echoey at times, but it’s only really noticeable if you have a different pair of mid-forward headphones to compare them, which I stupidly did. Some may find the echoey sound to be not much of a bother and actually a plus. For example, I’ve been looking for more bluegrass to listen to, of which Zach happens to be a fan. He suggested I listen to some Black Prairie, and I find the echoey midrange to add an additional air of etherealness to the sound, which is absolutely magnificent.

Timbre is a little off, as expected from a slightly warm headphone, but it’s off in the direction that makes instruments sound, to me, better for headphone listening, as the warmness allows for a more comforting listen. I’ve noticed the more accurate the timbre, the more I also want accurate soundstage, which leads to a headphone that is out of most mortals’ price range. The ZMF manages to nail the correct balance for my preferences.

Speaking of soundstage, it’s a little smaller than the HE500’s, but still sizable for a headphone. I very rarely found the sound to be cramped because positioning was exceptional.

Treble to my ears is a little more subdued than I remember the HE500’s treble. It’s extended quite nicely, but isn’t piercing. Harmonics are lovely, and best of all, there’s a distinct lack of sibilance for most of my music. I have noticed that the system I’m using is completely tilted to the warm side (Gamma2 and Audio-GD SA-31), so my experiences may be different from the average user.