The EN700 Bass By SIMGOT

I didn’t get the chance actually to listen to the original EN700 release from Chinese newcomers, SIMGOT.

I believe it was out last year and it is a fetching design and brought a bit of a stir though it also had its detractors with some critique on how it could be improved.

The most important feedback I believe was the lack of bass, both in terms of reach and physicality leading more reviews to praise it for its mid-centric bias but leaving them wanting just a bit more on the low-end.

This seemed to be compounded by the comment or two on the uneven treble response on the original version. Otherwise, a lot of people thought the EN700 had good potential in the budget range with some eye-catching aesthetics and accessories.

The second one I could pick out was the rubbery materials used on the cable which didn’t seem to be a huge negative but more of a missed opportunity to be addressed any further revision.

Well back comes SIMGOT a year later with the $109.99 EN700 BASS edition and no surprises what the new title might actually to allude to in terms of revisions on this product line.

The EN700 BASS is basically the EN700 new and improved and for just $10 more than the original. The word BASS is the key pitch here with the EN700 BASS being pushed as much more impactful and fuller sounding than before particularly on the low end as well as smoothing out a few of the treble peculiarities of the original.

The second pitch is the new cable. It is still non-detachable, in fact as I am told, SIMGOT will release a version of the EN700 BASS with a detachable cable int he near future though expect to pay a little more for that one. The current iteration of the cable is actually quite fetching in aesthetics and is much better all round for general everyday use than the rubbery original.

The final pitch is the build itself. SIMGOT have done a tiny bit of tweaking to the form factor of the EN700 BASS with an upgraded memory hooking system that should result in a better seal and less chit chat about seal issues than before.

The EN700 BASS is a single dynamic driver IEM built from a fairly lightweight aluminum alloy in a two-piece design though the top plate is comprised of 4 layers packed tightly together to be able to produce that distinctive design.

The design is like what would happen if you blended a Fidue A91 with a Hifiman HE1000 then shrunk it all down to size. It is probably one of the most eye-catching and unique universal IEM designs I have seen to date.

The back side is all A91 with a shallow teardrop/semi-oval shell and a short straight nozzle and a discreet bass port just below the stem. The front side is all Hifiman with a distinctive lateral grill pattern that gives an impression of an open headphone design but it is, in actual, fact, quite closed. 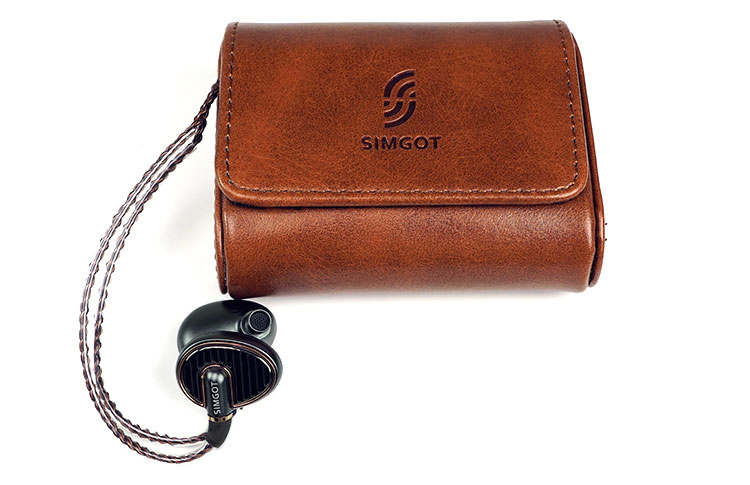 The finish of the EN700 BASS will largely depend on the color choice you go with. SIMGOT have launched no less than 4 different color schemes in a matte finish with the blue version yet to have an official artsy name. The other three are called thin-ink, coal-black, and bright red which roughly translates to titanium, black, red and of course, blue.

All the colors though have the same rose gold accent on the outer rim of the top plate which matches nicely with the cable connection joint and complements the more rustic colors of the cable. My personal preference is either the black or titanium which seems to blend a little better with the accented paint job than the red or blue.

The EN700 BASS has a non-detachable OFC braided wire with 400D DuPont KEVLAR fiber measuring around 1.2m in length and terminated with a straight 3.5mm gold-plated stereo jack. This is actually a pretty cool looking braided design. It is not the normal looser weave, instead, it is tight and more rounded in its finish with an aluminum y-split tube that seems to keep everything closely packed.

From the y-split tube, the cable splits into left and right so it is slightly thinner but more malleable for working round the ear. The memory hooks have also changed from the original EN700 with a more transparent clear color compared to the previous darker black materials.

The memory hooks are more guides than anything hugely memory retentive so whilst you can’t do a huge amount in terms of shaping them they do a decent job of keeping the unit in your ear. They are also low profile enough for glasses to be worn without significant discomfort.

The cable is very soft and easy to work with by the way and almost zero microphonics and dead quiet even with movement. It is not totally memory free, there are a few kinks here and there but overall it works itself out within the course of 10 to 15 minutes. 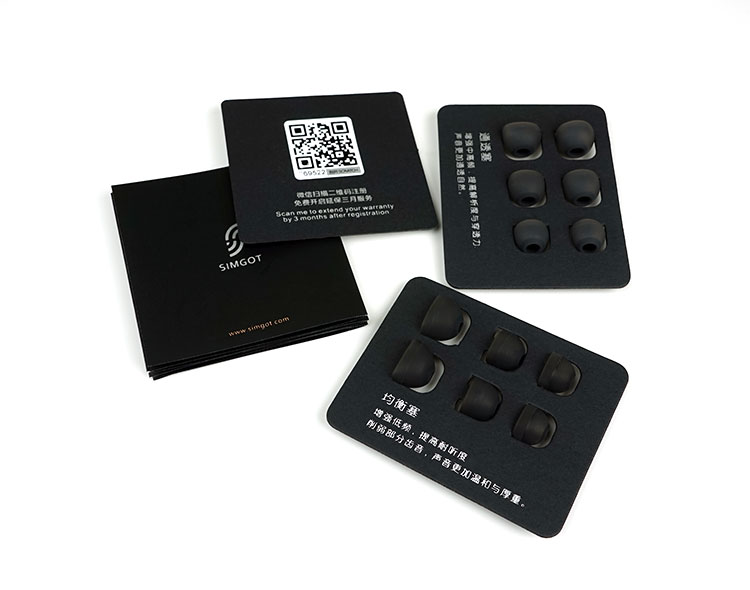 SIMGOT have supplied two different types of tip packages with the EN700 BASS called Eartips I and Eartips 2. Both 1 and 2 comprise of 3 sets of small, medium and large single bore silicone tips attractively arranged in a cardboard tip tray.

Where they differ is in the diameter of the opening with Eartip 1 having the large opening of the two. The larger the opening the more porous the design is for bass so Eartip II, with its thinner bore opening, is designed specifically to enhance the bass signature of the EN700 BASS. Eartip 1 with that wider bore will reduce the bass output in favor of the higher frequencies (mids and treble).

Beyond that, I have no clue where to put the little cardboard trays as they fit rather nicely in the supplied leather case holder but once you put the IEM in there is no room really for anything else. Also, being cardboard the trays will likely fray and fall apart rather easily. My suggestion is to grab a tiny plastic bag and dump them in there and place at the bottom of the case should you wish to tip change on the go.

This is purely anecdotal but I honestly had no issues with the fitting of the EN700 BASS. The nozzle is reasonable in length so tips will play a role and normally silicone tips provide an average seal for me but on this occasion, the supplied tips did much better locking them in fairly tight with above average seal. You will get a bit of background noise for sure with that bass port preventing a rock-solid seal but otherwise no issues once the music started playing.

Those with smaller ears do watch out for potential pressure against the upper concha of your outer ear which is where I suspect contact would be most likely. Also, the cable does point inwards ever so slightly and the metal cable joint does come across the most forward part of the Helix which can irritate some after prolonged use.

The rest of the package is quite good at this point with special praise for the rather fetching branded brown leather case. It matches the tones of the EN700 BASS cable and chassis finish quite well and there is plenty of room for it and a bag of tips for listening on the go. 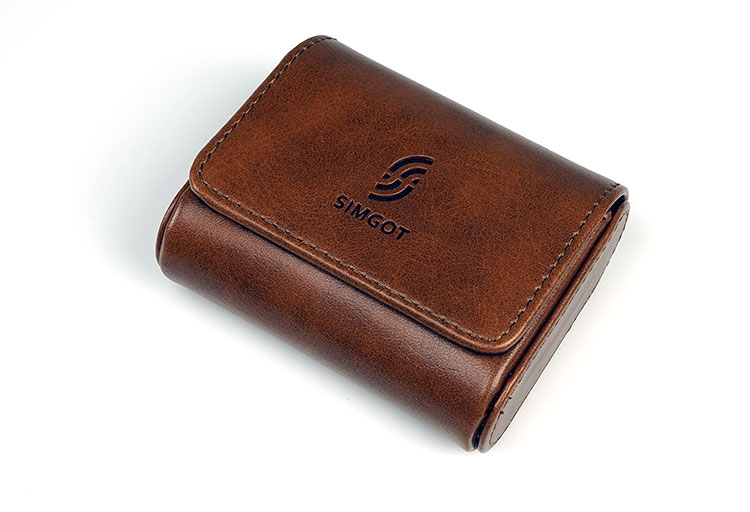 Not sure about the meme at the back “A salute to art & science” but I get where they are coming from. The front contains the SIMGOT branding and the flap is magnetically sealed to keep it all fairly low profile.

Aside from the leather case and the two sets of tips you also get the following:

All of these comes in a rather attractive and professional manufactured retail box consisting of a white printed sleeve over a very fetching but understated black box that contains the IEM and accessories in a simple but attractive layout. Nothing overly complicated about this packaging and that is why I like it. 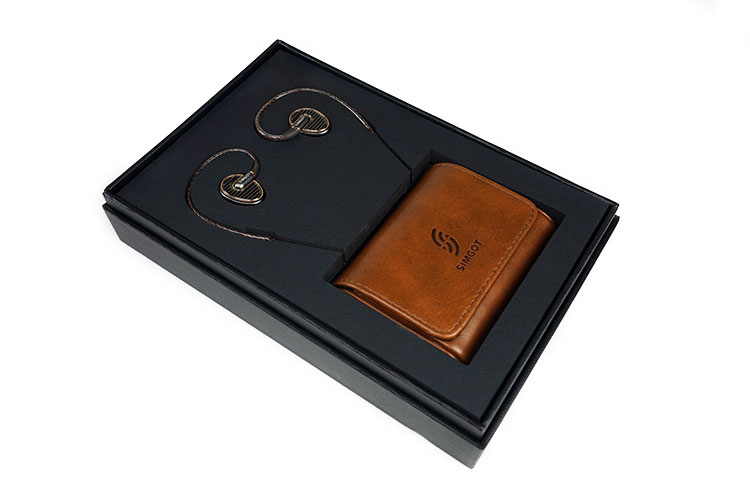 Whether you use tip 1 or tip 2 with the EN700 BASS the core response is a v-shaped presentation with a ‘warm to neutral’ presentation and a fairly well tuned and energetic upper mids to lower treble signature. Tip 1 will go slightly more neutral with a bit more upper mid to treble energy and tip 2 will bring in more warmth and body, particularly on the low-end.

As such the v-shape will add a fairly spacious sounding quality to the EN700 BASS soundstage though imaging and instrumental positioning are on a bit more on the vague side but nothing sub-par at this price point.

These are the wider opening tips and they sound a bit cleaner and better balanced for me than the tip 2 selection which came across as overly mid-bass dominant and lacking in a top end articulation for rock but better for some EDM.

Tonally it’s still a relatively warm to neutral signature but this time the mids are a bit more spacious sounding and the bass is not quite as boosted and full sounding. It does not lack impact, by the way, the bass response is still north of neutral but it is not the dominant range with the ear tip 1.

Treble is more forward sounding on tip 1, with more sparkle and energy compared to the more laid back sound of tip 2. Note quality is on the thinner side but it cleaner attack works better for me for percussion and synth work which needs more perceptible clarity and focus.

Tonally the EN700 BASS gets a little warmer with a significant low-end boost with these smaller opening tips.

Boosting is more around the 80-100HZ marker with a dip into the lower mids. It rolls off a touch once you drop below 50-80Hz also so whilst there is decent extension the EN700 BASS is more about quantity and impact with tips 2 than sub-bass rumble and power.

Timbre using tip 2 is more on the euphoric side with a richer presentation throughout including vocals which are fuller sounding than tip 1. Tip 2 will appeal to those who like a smoother sounding more natural quality to their mids and vocal performance.

Treble on tip 2 is laid back, not quite as energetic as tips 1 with a softer attack and less articulation. It is not as perceptibly forward or clean sounding so those looking for more percussive presence and sparkling synth attacks might look to tip 1. Those who like a more forgiving top end with more body will enjoy tip 2.

Tuning notes on both Tips

One thing to note on both tips. Sibilance is at a minimum. The upper mid to lower treble on the EN700 BASS has a fairly nice level of energy without ever sounding harsh or peaky. Switching from tips 1 or 2 is really just about how much presence you want in this area as neither will spoil that excellent tuning.