The Alien+ is packing an AK4495SEQ DAC chip which is part of AKM’s VELVET SOUND architecture though not quite on the same level as the AK4990 full-size version. It is a popular chip, widely known for its competitive pricing, even at boutique levels of ordering as well as being a lot simpler to implement and filter than the older ESS9018 chip variants. It is also generally regarded as a fairly musical sounding DAC. This is a full-size chip instead of a mobile version and would likely contribute to that slightly shorter battery life cycle.

Whilst it doesn’t have the same dynamic range capability as the latest ESS9028/38 variants at 120dB DR what Shozy have done instead is gone for a proper +/- 12V step up PSU power supply to maximize the internal implementation and fully utilize the DAC chip. The argument here is that higher end DAC implementations are underpowered somewhat in other DAPs and despite the impressive figures you are not getting the full monty out of them. 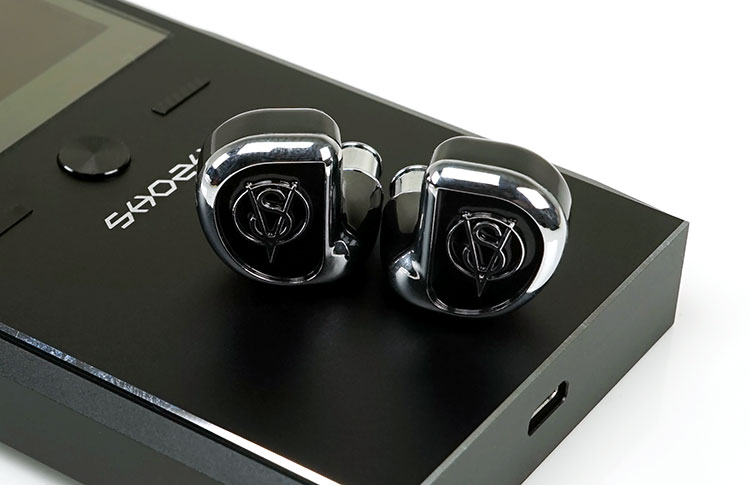 The range of decoding is now expanded on the Alien+ which should make previous Alien owners very happy indeed. Aside from the usual 24BIT/192kHz Wav file support you also get FLAC, APE and MP3 support. It is still a bit limited compared to other DAPs, for instance, Apple ALAC users will have to convert before using and there is no place for popular hi-res containers such as DSD.

Further, and a legacy from the old Alien decoding parameters, the highest level of decoding, 24BIT/192kHz, only applies to WAV files. Everything else will drop down to 16BIT/44.1kHz, including FLAC, APE, and MP3. For the vast majority of FLAC files off CD rips it should be enough and perhaps going higher might have killed the battery altogether.

The Alien+ uses an in-house SOC design built from the ground up using C+. It is not a system as such though it has a definite structure and flow process in terms of a hierarchy of commands, functions, and navigation. It is largely text and line based with a few small icons for gain level, battery, play and pause, and a small group of icons for the playback information. It is also extremely fast to boot up, like 1-2 seconds max.

In layman’s terms, this is a really simple low resource interface designed to put as little pressure as possible on the processor. Those used to Android will find it more challenging, those coming from old school iPod Classics, Colorfly C4 Pro and similar interfaces will find a lot of this fairly plain sailing.

The work flow of the SOC is divided into 5 level features from which you control how the player it setup in general, a random play or shuffle function, folder navigation, a linear playlist and a now playing option. The playlist, folder view and random play options are really different ways of diving into your music. 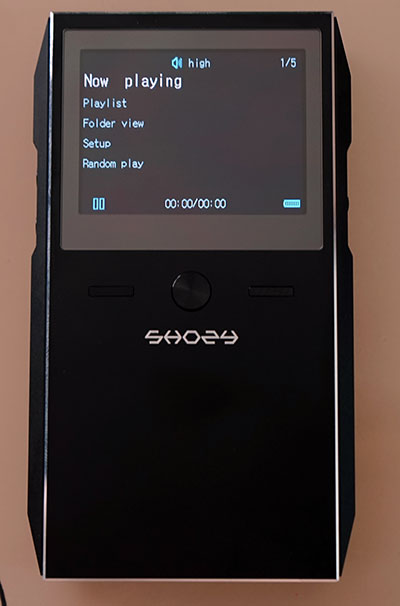 This is probably the most likely one you will use. It is logical and depending on how clean your folder structure is quite easy to use. From here you can drill down by folder name to the song title. It is very similar to file exploring tools used by the likes of Hiby Music on a plethora of GUI loaded DAPs. It is simple, fast and largely works but the onus is on you to keep your folders active and properly edited on the cards.

The Random is a shuffle mode much like you would find on any other DAP. You can elect to turn this off or choose to select a file or song option in the settings menu as the process by which it randomly selects.

The playlist is a complete alphanumeric list of all the songs the Alien+ OS has found on your memory card. The list cannot be edited, compiled or changed. What it does do is keep a marker for you in terms of what you are playing now and what will be played next or before. It is quite linear in that respect. It will hold this marker even if you opt to dive in and use the Random Play mode.

Both playlist and Random play mode do require a media management capability and titles in a database to pull from. The Alien+ compiles this database from a media initialization option in the settings menu.

Pleasingly it is fast and compiles very quickly, perhaps even more so than the Android DACs with 873 FLAC tracks being compiled in just under 10 seconds. Admittedly there is no tag mining and it lacks cover art so how well your folder data is built will be reflected in the final media database listings.

I would also sound a warning for overly complex file paths. If the address is much too long and the Alien+ has to drill too deep you may run the risk of some files not being found. I found a single folder with simple tag names and file structures worked a treat and pretty much every song was picked up during the initialization. I also found orphan folders with no files showing up so a bit of spring cleaning now and then on your memory cards will help to keep it tidy. 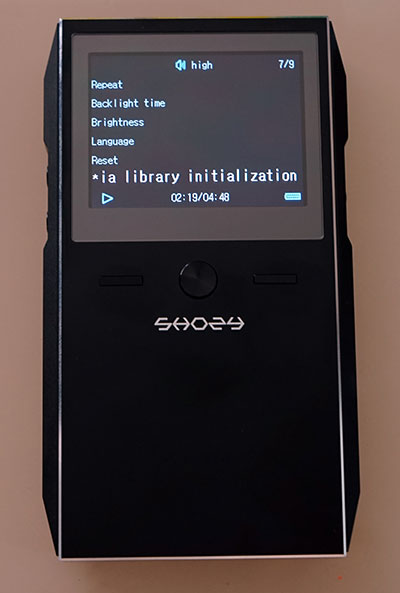 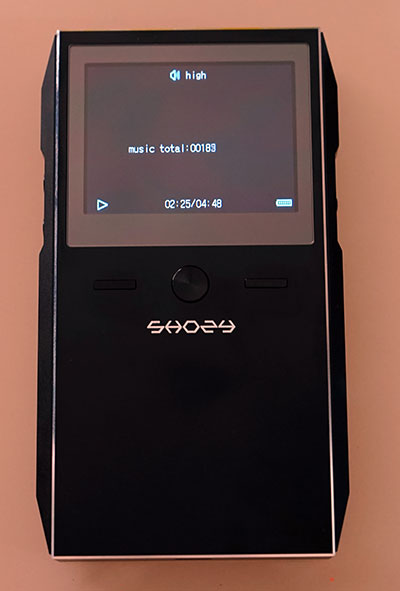 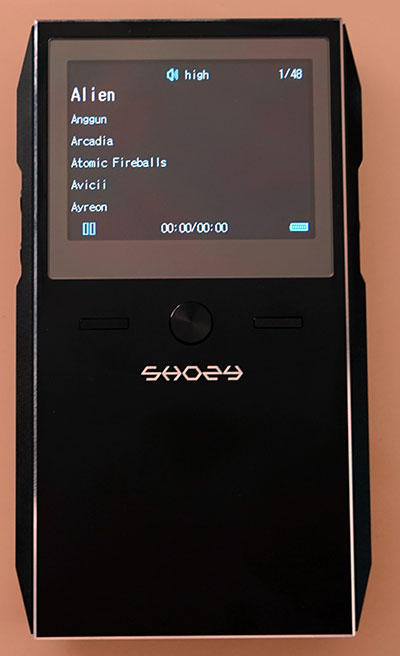 This is perhaps the most detailed of the options but not by a huge amount and the details on the screen are largely passive and non-interactive. The home screen will show you your gain setting, song title and folder and position in the playlist as well as the sample rate and bit depth of the song being played.

At the bottom it will show the track time and whether or not you are in play or pause mode. You can control the playback through the top panel buttons which will pause, go back or forward in the playlist.

You can navigate without interrupting playback button 4 bringing you out of the playback screen back to the home menu. From there the top panel left and right thin buttons are active once again for menu navigation. The central round button will still stay linked to playback to give you pause and play operation whilst you are outside the playback screen. 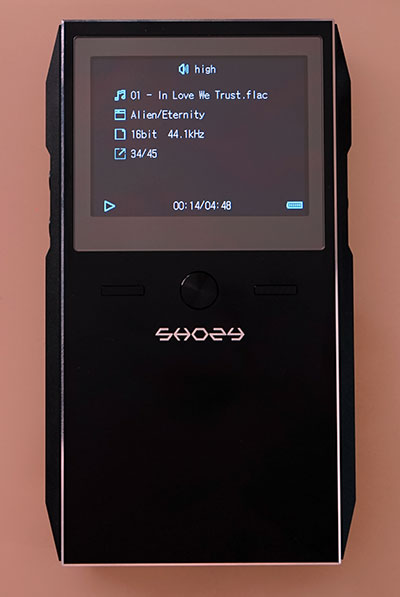 Well, I personally would love to see a proper volume marker in the OS instead of just the gain mode, perhaps beside the gain mode. It also lacks the ability to fast forward or reverse within Flac files but seems ok with Wav files, this should be something that is universal to all file formats using the page flip button (no 4).

There are a number of important features hidden in the setup option from the homepage. Features that will prolong the battery life of the Alien+ as well as tweak the gain and ‘touch-up’ the tonality of the sound. Some for me are critical, some are superfluous.

Options such as backlight time and screen brightness levels are fairly critical to me given the 5-6 hour playback time in stock mode. I would recommend you drop the backlight time down to 10 seconds and the screen brightness to around 2 clicks left of center in normal daylight conditions. These will help save a few mins previous time for playback. 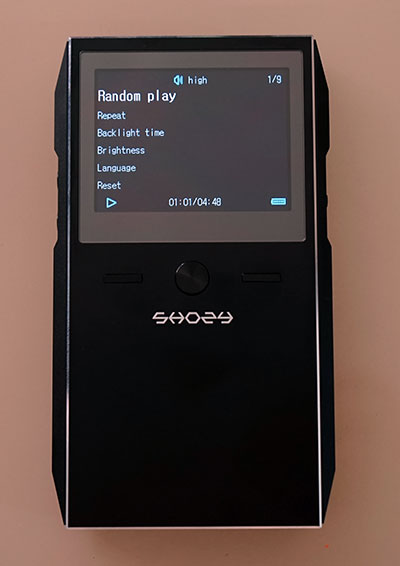 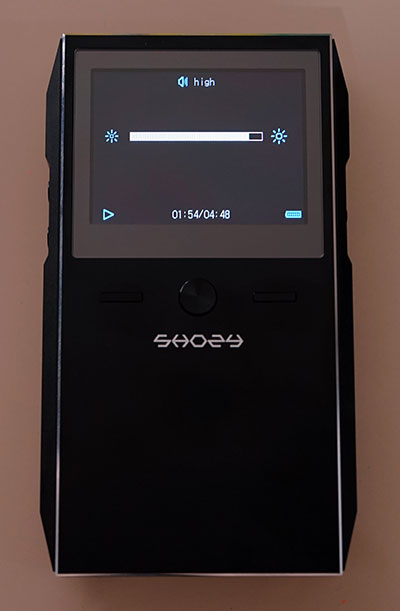 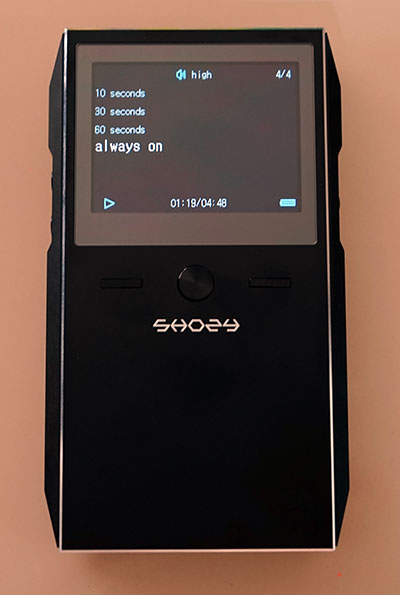 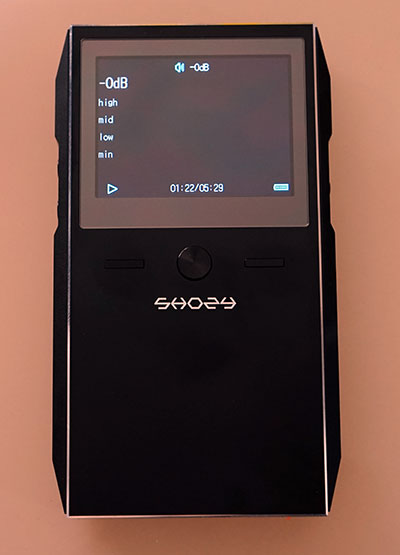 For tweaking the quality of sound you have two key options you can control from the setup, gain and DAC Filter Mode.

The Gain mode is particularly important because the output power of the Alien+ is quite strong (no official data provided by Shozy).  You have 5 levels of gain which is more than what most DAPs will offer. You have a flat 0dB level, min, low, medium and high. Generally speaking, I advise starting at the min for sensitive IEMs and moving up from there, fine tuning with the analog volume controls once you find the right gain level.

This DAC can offer up to 5 different digital filters, sometimes you will see those on other AK chip powered sources such as the N5 and N6 and the newer DX200 ESS chip sets. On the Alien+ Shozy have chosen to activate and offer 4 of those filters via the setup menu with the slow roll-off the default filter.  You also have the option of sharp roll-off, short delay, sharp roll-off and short delay slow roll-off. (July 2017 firmware).

Areas such as language and the About setting are slightly superfluous unless you are using Mandarin, Cantonese as your primary language. The other option is English and if you are ordering it is likely English out of the box. The about Screen will simply tell you how many tracks are initialized, the date of the last firmware upgrade (July 2017 in this case) and the Serial Number of your Alien+.