Our previous award winner from 2016 and still a top performer to this day. The EAMT-2C may have been overtaken now by more expansive and complex competitors such as the A18 or Mason V3 but it still delivers a very unique and open sound. The form factor is slightly different with that tear-dropped shape but it still used the same ceramic chamber and the intention is much the same as the Ra C-Cu, lush tonality and wide open soundstage.

Internally, the EAMT-2C uses a smaller 12mm NDD driver as well as the previous version of the AMT driver for tweeter duties. The rating is also more efficient at 16Ω and 105dB compared to the Ra’s 182Ω and 104dB specs. You may not have to adjust volume too much between the two of them on a good amp but the Ra is more demanding for quality power than the EAMT-2C. The sensitivity to higher noise floors on both is impeccable.

Both IEMs scale with better amping power and a higher quality signal in general. The Ra’s larger NDD driver will provide a much purer low-end and much better sub-bass presence and texture. If there was one thing I remarked on in my old EAMT-2C review was just a slight yearning for more sub-bass texture and power. The Ra delivers that and in much greater quantity without sounding overly physical at the same time.

On the opposite end of the spectrum, the AMT 8II tweeter seems much cleaner and more extended than the 2C’s older AMT MK1. There is more energy in that final octave up to 15k with the Ra C-Cu. However, the Ra is pickier with the synergy than the EAMT-2C. You will get superior headroom and an airier treble performance but you do have to watch both the quality of power and the amount of power you feed the Ra. Too much, or too cold sounding and it can come across as sharper than the 2C. Too little and it tends to come across as more veiled, especially in the upper mids.

On initial impressions, most will say the EAMT-2C is the more forgiving of the two and true enough its top end is much easier to drive. However, even on relatively modest amps that match well with the Ra, the tonal quality is much more refined, particularly with vocals which sound sublime. On the EAMT-2C you get a little more immediacy and a more upfront vocal but not as silky smooth and as detailed sounding as the Ra.

Stage 7 is Rhine’s TOTL 7-balanced armature custom monitor with a 4-way crossover. This one has been with me for a while but yet to publish a review on it. Stage 7 is rated at 21Ω and 118dB and is miles more efficient and much easier to drive than the Ra. It will have some scaling properties in terms of quality of audio signal but desktop amps are totally unnecessary to sound optimal.

The Ra, however, will play better on higher noise floors and also jump over high impedance output hurdles without distorting its presentation. DAPs like the HiBY R6 and amps like the Tempotec Serenade iDSD will skew the Stage 7 low-z frequency response.

Much like the A18 is beautifully custom designed. Whilst the materials are not as decadent as ceramic and copper the fit is going to be that bit more precise and the seal is going to be much better. Then again, the Ra is a semi-open design so it is not really going to be competing for the utmost levels of attenuation against something like the Stage or even the A18.

Tonally the Stage 7 is dark sounding with a warmer but woolier mid-bass and thicker sounding and prominent lower mid-range. Instrumental timbre is decidedly euphonic and richer sounding than the Ra’s linear and cleaner signature but at the same time, it is also far woolier and less detailed sounding.

You will also notice how attenuated sounding the top end is on the Stage 7 in comparison to the Ra. There is simply next to no headroom and extension in the Stage 7 treble response which pushes down into the mids to such a level that it sounds veiled in comparison. The Ra has bags more upper treble energy and headroom with a far more open and spacious midrange.

All this helps cast a far more convincing and holographic soundstage on the Ra. The NDD driver digs deeper, delivers much better levels of detail and actually sounds snappier to my ears. The Stage 7 has decent sub-bass presence but it is more forward and intimate sounding and nowhere near as good in delivering nuanced low-level spatial cues.

This is really a chalk and cheese comparison with the Stage 7 and the Ra. The Stage 7 is so even harmonics dominant for a TOTL CIEM you could literally throw anything at it and it would sound quite smooth and musical. What the Ra offers is far a more resolving and accurate sounding with bags more clarity and articulation. Things you notice on the Ra will simply slip by you on the Stage 7.

The 64 Audio A18 is their top of the line custom made multi-driver IEM. This is an 18-driver masterpiece with a BA hybrid Tia technology design. Last year we reviewed this and gave it a whopping 9.6 for its tonality we were that impressed by its level of detail, control, and a big soundstage.

The APEX technology also played a valuable role in reducing potentially damaging consequences for your ears as well as offer a level of tonal tweaking with the M20 and M15 modules. We thought the M20 module was the more musical and interesting of the two and served to fatten up what is otherwise a largely neutral sound.

On a more superficial note, the packaging and accessory line up for the Ra just slays the A18’s neat and tidy but rather spartan presentation, but then it should right?

The A18 is rated at just 9Ω and 116db and is way more sensitive than the Ra C-Cu requiring much less power to be driven optimally. It will be more sensitive to higher noise floors and show up background hiss were gain is aggressive so for portable amping on a technical level it is a little pickier than the Ra. Synergy-wise it is less fussy than the Ra and will sound pretty good from most efficient amps.

Watch for output impedance on the A18. At just 9Ω it will have a low-z skew on the likes of the HiBy Music 6 and its tone will change as a result. The Ra, on the other hand, has no such issues at 182Ω. However,  to get the Ra sounding optimal you need a fine balance of good power combined with a source or amp that has a higher level of 2nd order harmonic distortion to keep the AMT 8II on an even keel. 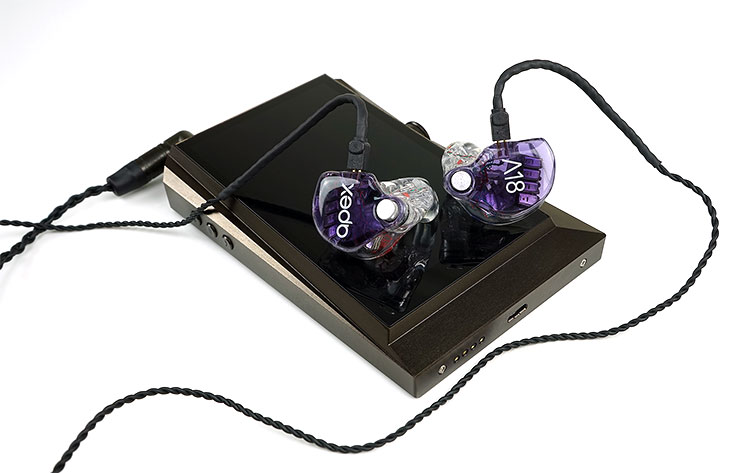 Tonally, the A18 has a natural to neutral quality to its timbre with a quick paced tempo, excellent clarity and very good control indeed, particularly with the Tia high driver. Using the M20 will also deliver a bit more low-end body and a fuller sounding vocal sounding presence than the more linear sounding M15 module.

As spacious and detailed it is you can tell it is a BA design once you A/B with the Ra. As I mentioned in my discussion on the bass performance and imaging of the Ra there are subtilties that the Ra can convey that get missed with the A18.

The low-end on the Ra is more natural sounding, hits harder and coveys more detail. The Ra’s bass texture and layering making the A18 sound just a touch one dimensional as a consequence. Little nuanced low-end spatial cues heard on the Ra do not catch your ear as much when you switch to the A18.

The imaging on the Ra also has a more 3D-like or immersive presentation. The A18 may feel wide and yes, the control is excellent but it not quite as open sounding. That echo demo I used in the imaging description goes a long way to demonstrating how much better the Ra is with “painting” an accurate picture of depth. You get a better sense of just how exactly big that room is in the song with the Ra. 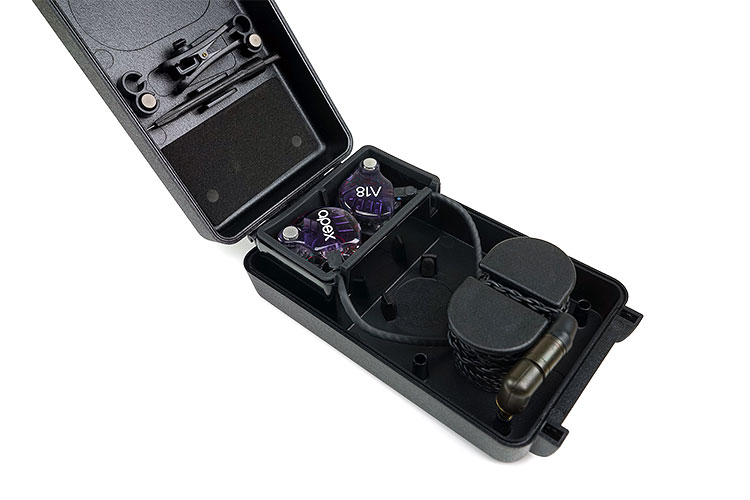 Both the Ra and A18’s treble performance is well extended into the final octave however they differ markedly in just exactly how far and how much energy there is until the final moment. With the A18 the 10k marker is decidedly lower than its peak around 12k. It then drops away fairly quickly around 14k.

The Ra is more sustained from 10k right up to 15k so the level of sparkle and energy is much higher than the A18. As a result, the A18 actually might sound a little more relaxed and more forgiving than the Ra. However, it does not deliver quite the same level of air or headroom which some people will definitely prefer. 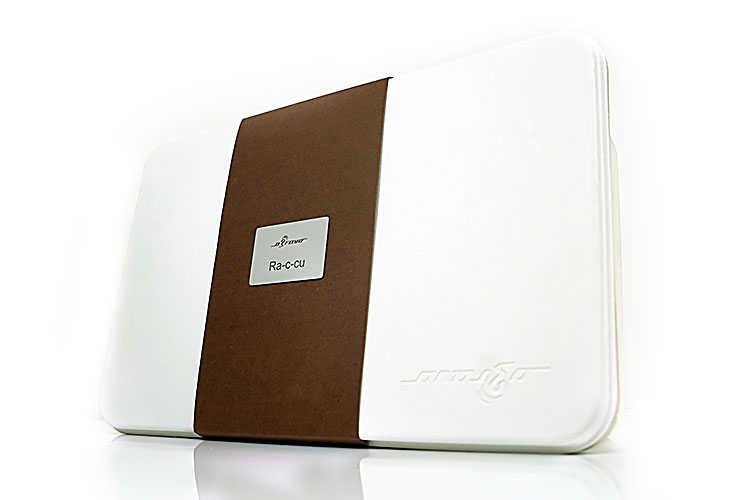 Before I started writing this review I checked in with Audio Sanctuary in London who sell the Ra and we spoke about the customers who bought it thus far. I had the impression that they would be rather affluent but it was simply not the case.

Yes, they could afford it but they tended to be more middle-class status with a fairly regular wage and normal budget levels in life. Perhaps my own relative poverty-stricken bias was clouding my expectations and I would caution you on your own when reading this. Whilst I have no doubt serious system buyers are among the customer profiles it is also true to say that other people who are buying the Ra are just like you and me. I did ask what was their compelling reason for buying it and I was simply told they said it was the best sound they ever heard. Fair enough!

Is it the best sound I have ever heard from an IEM? When the synergy is right yes it is, when the matching is all wrong perhaps not. And that is the crux of the Ra story. Think carefully about what it is you are pairing it with because it is not simply about power although power is part of the formula. It is also not just about the quality of source or genre though it helps. It is a balance between power and tone and what it is you want to listen to that makes the Ra so unique and compelling.

My personal preferences with the Ra veered to quality tube amps with silicone custom tips and genres with a firm focus on nuanced detail. Music that really stretched the stage and demanded pinpoint imaging in every possible dimension. There I felt it had an almost speaker-like quality.

However, this preference may not be yours. If you are into something less fussy, more laid back and easier to drive from DAPs there are plenty of excellent options that cost less than the Ra. I won’t sugar coat that part of the decision-making process because most people do see an IEM as a pick and go kind of headgear. The Ra is not that sort of IEM.

Also, I honestly do recommend you demo widely to find that perfect match before you buy the Ra C-Cu. I include cables, tips, and DAC’s into that equation. If you are prepared to do your research, and I suspect at 10k you will most likely will, then the Ra has the potential to be one of the most rewarding IEMs out there.