The beyerdyamic DT 240 Pro is a portable closed-back headphone designed for monitoring and recording in the studio or out in the field. It retails for $99.

Disclaimer: The DT 240 Pro sent to us for the purpose of this review is a sample and does not have to be returned to beyerdynamic. Thank you for giving us this opportunity.

The world of portable studio monitor headphones has always been a bit bleak, to say the very least. Someone needed to spice things up, but also to craft one that is useful.

Leave it to beyerdynamic for that need with their latest DT 240 Pro: a heck of a little on-ear monitor that should really peak the interest of the modern DJ or basement hobbyist mixer out yonder!

Metal cups adorn the DT 240 Pro. At the $99 tier, this is a very good offering. True, it really makes me miss the stunning woodie cups of the Audio Technica on-ears but, it is what it is and for the intended usages, this is just fine in terms of build.

The inner headband is a metal and both the earpads and headband areas are, as I was told, faux leather. Yep, they get pretty warm pretty quick, especially if you are out for a walk in warm weather conditions. They are plenty soft and comfortable, sure. But, what worries me is their intended usages, which was for mixing purposes, would become uncomfortable and too hot after a solid 30 minutes of usage for me.

That is subjective. I am not fond of on ears and find myself sensitive to on-ears in general. The DT 240 Pro gets warm and I can’t see an actual studio mixer finding them comfortable with the included moderate level of clamp, as well as the warmth factor that pops in to say hi faster than I’d prefer. Closed back, leather on-ears tend to do that. 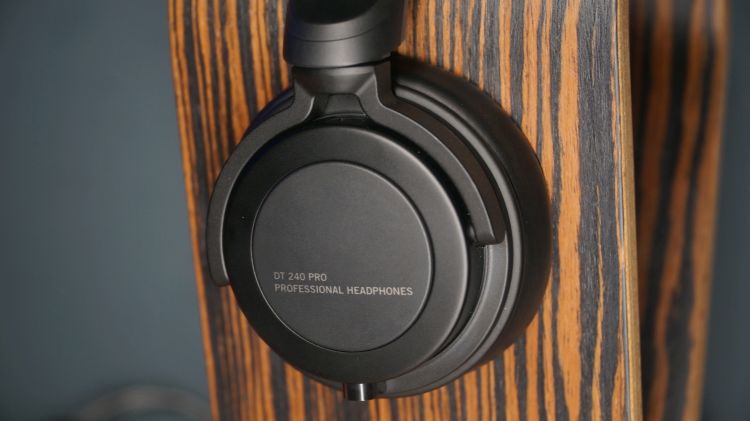 beyerdynamic has opted for a standard 3.5mm (with included ¼ adapter) coiled cable that terminates into a 2.5mm into either cup. You can choose the right side or the left side, pretty neat. Likely intended that way with DJ’s and mixers in the studio in mind and depending on where your setup is located while you sit or stand.

It is pretty cool to be able to swap from side to side as I please. But, the coiled cable is just no good for actual portable usage and it is a bit of an eyesore. It is fantastic for studio usage where you do not want extra slack, but do want it to give, in a physical sense on the cable, when you need to move around just a bit without the cable being yanked out of the source.

I’d have preferred a standard portable cable without a coil, as well as the included coil. Seems way too intended for just DJ’s or studio mixers and not really set up for audiophiles who just want a good on-ear to listen to as they go about their activities. 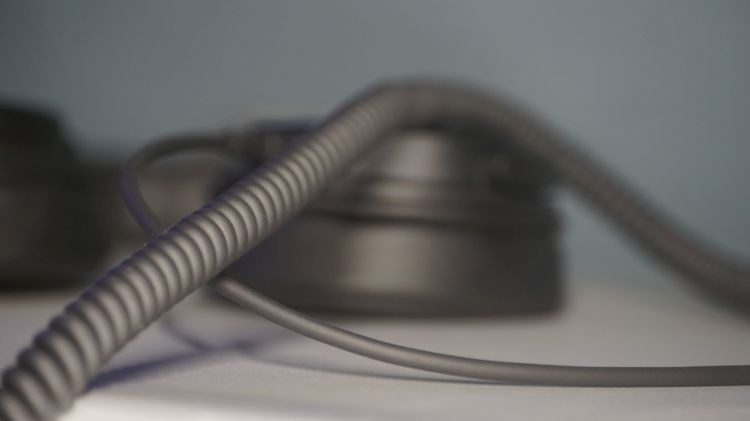 The DT 240 Pro is hyper-pure. Accuracy lovers will enjoy this one a lot. Musicality lovers, like myself, not so much, at least, likely not on a subjective level. I regard the bass end of the model as very pure, very clean and dynamically interesting. That means the physical kick and slam factor is not harsh or annoying, but it also is not overly soft and unappealing. It peaks my interest and keeps my ears on their toes, so to speak, and that is what I want as a listener.

As a Mixer I need it to be accurate to the track. It needs to be soft when the track says it is soft, harsh when the track says it was harsh and slamming. I don’t feel like the DT 240 Pro can accurately gauge that property of the sound experience. But, at the $99, this is still pretty good. I see why beyerdynamic would tune the headphone this way because it is logical.

It does sound fairly soft when I play tracks that I know are very soft. It will slam more than soft headphones will on tracks I know to be harsh. This is not a basshead headphone, it lacks rumble and depth. Instead, you will receive a lower amount of bass quantity, even with a +3dB boost down yonder, as well as very good quality overall for a $99 headphone.

Neutrality is the name of the game with this model. This applies to both the tonality and the physical location of the midfield presentation. With regard to tone, you can expect it to sound crystalline and pure, lacking an exaggerated heft and coloration in the lower midsection, along with a gentle brightness to the upper midrange as a whole.

The headphone is intended for accuracy here, no doubt. Where it sacrifices what I consider fun-factor and exaggerated bloom effect, it replaces it with an attempt at neutrality and clinical appeal. This is a great thing if you dislike heft and exaggeration in general. If you, instead, prefer a more musical flare to your listening experience, there are much better options out there.

Quality, again, is very nice for the $99 and under tier. In fact, I can’t recall many other models out there that are clinical in tone, on-ear and also lacking a harsh bite. For $99, this is a great value if you are Mixer or DJ on stage and require that accuracy in tone.

As for raw quality and fidelity, the DT 240 Pro is just good in the on-ear world in general. However, in only the $99 on-ear world, it might be one of the best I’ve heard in terms of literal audio quality. Great job, team beyerdynamic! 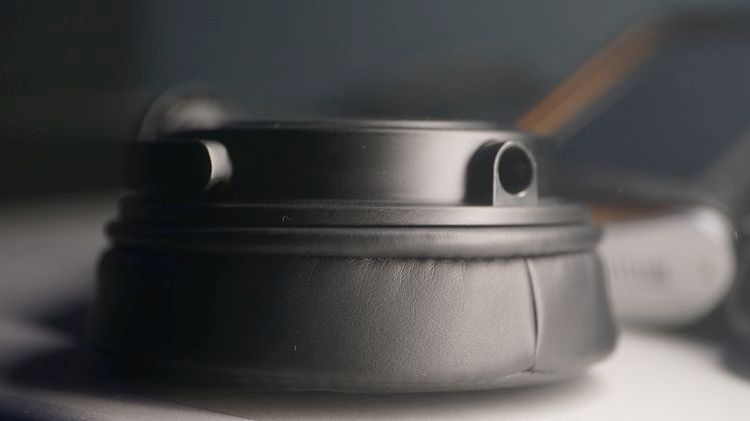 If you have experience with clinical-sounding headphones of the past, you should know exactly what to expect here. There is a tad of brightness appeal up top and it does get fatiguing at times. beyerdynamic’s house sound is really not a warm one in the treble areas and they are more well known for “plentiful” treble, at least, most of the time.

No, the DT 240 Pro is not painful or over-abundant with treble, but it is certainly plentiful when the track really calls for it. I have to trim my EQ on the top end by a dB or two just to compensate and feel less fatigued.

Physical slam is not really an issue unless the volume is too high already (please, be careful in the studio) and if the track really is banging on something treble happy. If that is the case, just be prepped for some wince factor.

Otherwise, the literal fidelity factor of the treble experience is probably the highlight of the headphone, at least in my humble opinion. I find it satisfying when the track is very well recorded and of a higher standard. If not, I have trouble on a subjective level listening to older tracks that are not as nicely recorded. I feel comfortable in saying the treble factor here for the $99 and under tier deserves top marks. Definitely, one of the better sounding treble experiences in the budget areas sub-$99 that I’ve heard.

The DT 240 Pro is very closed in sounding and lacking a good sense of width and height. The depth of field is enhanced by the brighter upper midrange and the plentiful treble above it, which makes airiness factor feel pretty good. This is an odd dynamic, due to the fact that the headphone just doesn’t sound particularly wide enough to make up for the good sense of air in terms of stage-forwardness.

To put it lightly the headphone sounds a little unbalanced and too good with depth factor, while height and width are overly lacking by comparison. This is a $99 on-ear, closed back headphone after all. So, you really can’t be too sensitive to feedback on that area, when almost nothing else on the market has a fantastic sound-stage experience in a similar design to this DT 240 Pro.

For what is available, the overall imaging prowess of the headphone is just moderate. I’ve heard better, but I’ve also heard far, far worse. Don’t expect anything special here. Do expect just a normal, as-expected sound field in terms of size, but, with a pretty good depth of field factor out in front. 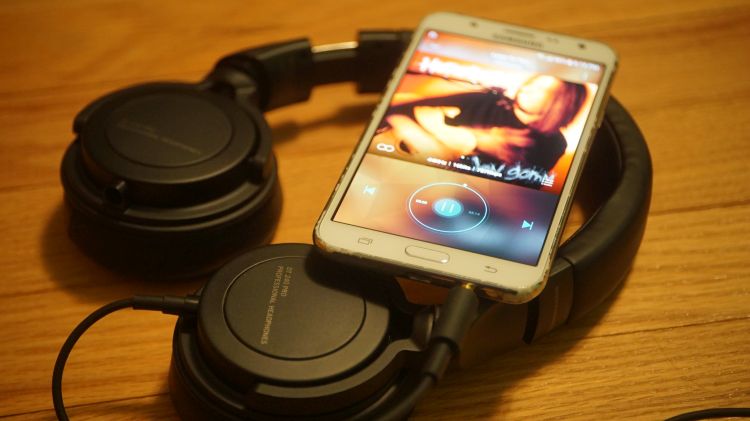 At 34Ω, the DT 240 Pro requires almost no amplifier usage at all and really does not benefit from it in the slightest. Bass and treble feel exactly the same on a flat EQ on my portable sources as they do on my home desktop rig being powered by expensive amps and USB DAC’s.

Of course, the overall fidelity factor goes up with the more expensive rig, but not by too much really. Don’t worry about your source or amp, so long as it is at least regarded as moderately satisfactory, you’ll be fine and won’t be missing much in the way of the track itself.

What I have oddly found is that the old Audio Technica ES and ESW series (ESW9/10/11ltd and ES10) are all pretty much the inverse of this DT 240 Pro in terms of tone. Where the DT 240 Pro is clinical and pure, lacking a forward midrange and instead offering a linear physical appeal, the ESW11ltd, for example, sounds more natural, musical and fun with far less fatiguing experiences overall.

I can use the ESW9 even, which runs roughly $125 used even on today’s market, despite being almost a decade old, and never feel my ears feel soar. That spans into comfort factors as well, as the DT 240 Pro has a moderate amount of clam that just shouldn’t exist in a studio monitor means for hours of usage. Unless you are running around with them, I don’t see why it needs hefty clamp such as this.

I found this an interesting comparison because the still very rare and expensive ATH-ESW11LTD (my personal portable set of choice) sounds just a little bit better in overall quality and fidelity. If you wanted a more clinical ATH-ES series model, beyerdynamic has one in the DT 240 Pro now and it is only $99! For reference, I paid $399 for my ESW11LTD years upon years after it was released. Someone finally caught up. Thank heavens. 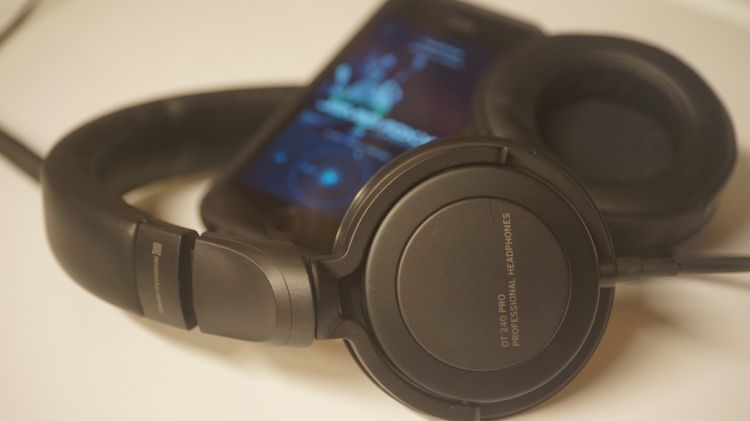 I believe that beyerdynamic has made a fine headphone for studio enthusiasts and those who enjoy a very pure tonality and presentation to their listening experience. In my opinion, the treble can be very beautiful at times and only if the track is very well recorded. If it isn’t, it gets wince-worthy at times for me. Otherwise, the rest of the spectrum looks plenty clean and offers a more than acceptable build quality.

I’d have preferred to see a straight cable, instead of a coiled one. I’d also like something that breaths a little more for studio usage in regards to earpads, as DJ’s and engineers would be sitting for half a day with this set on and it just tends to get too warm too fast.

Beyond that, the clamp factor is just a bit too strong. Perhaps, gentle bending over some books or something will lessen that tension and provide a better fit. My ears are always sore after using this headphone for hardly 20minutes.

But, that is subjective. I know others who can wear it for extended periods and feel fine. If you have sensitive lobes like me, ATH’s ES series is more your speed. Especially so if you want musicality. Otherwise, purists rejoice. You have a very nice sounding clinical portable now in the $99 and under tier. beyerdynamic has done very well.