The Dan Clark Audio VOCE is the debut launch of the company’s first-ever electrostatic open-back headphones. It is priced at $2999.

Disclaimer: The Dan Clark Audio VOCE sent to us for the purpose of this review is a sample and does not have to be returned to Dan Clark Audio. Thank you for giving us this opportunity.

Dan Clark Audio VoCE
Overall, the VOCE is up there with the rest of the stats "crew" and a real quality option for those who want electrostatics but a far more organic or natural sound.
Slide here to add your score on the gear!181 Votes
9.2
9.2
Reader's Score
$2999
Dan Clark Audio

We knew MrSpeakers was working on an electrostatic headphone over a year ago but the details at that point were sketchy to me. It was not really until the second or third quarter did the VOCE become a ‘thing’.

I spoke to Dan about the VOCE over (a very spicy) dinner in Guangzhou in early Nov 2017. At that stage, it was more or less complete but the final name had not materialized. In fact, some of the names on the table that evening were far away from the final name. VOCE came out of nowhere but as someone who spent time writing musical scores in the 80s, I knew right away what it meant.

VOCE is pronounced “voh-che” and is Latin for voice. It is often used within musical score-writing as an instruction on how to pitch your arrangement to either suit or control the vocal pitching in any musical passage, for example, mezze voce, sotto voce, and colla voce.

This naming “hint” combined with Dan’s admission that the concept of neutrality presentations tended to bore him gave me a feeling that the $2999 VOCE was, indeed, going be voiced a bit differently to the stats ‘norm’.

Pretty simple really. This is MrSpeakers first electrostatic headphone and at $2999 is not what you would consider being an overpriced one at that. The VOCE stands somewhere in-between the SR-007 MK2 and the SR-009 from a pure price point of view.

At the same time, MrSpeakers have sought to migrate some of the desirable features their planar range into the VOCE design. Features that may attract existing Ether and AEON owners to branch out or attract stats owners who yearned for those features before. Examples such as the attractive and lightweight half-gimbal, tuning pads, or the Nitinol headband on the VOCE come to mind.

Of course, the real pitch is presenting an alternative in the electrostatic market which quite often can be seen as an arena dominated by Stax. Not just an alternative pricing point or even product design but a pitch for a different sound with competing quality. Most equate electrostatic designs as lacking in a low-end extension that leaves the experience as detailed but perhaps too ethereal in weight. MrSpeakers are pitching the VOCE as anything but that with a proper low-end response that makes a monkey out of those prevailing opinions.

The form factor is more traditional than the rectangular and long oval shapes of some Stax models and Koss but the design lines are bold and striking. The first image in your mind when you see the front grill is that of a spider’s web.

The grills are actually part of the 2-piece cup housing which is made from a sturdy but lightweight aluminum material finished in a glossy anodized silver finish. The cup housing also includes the front angled cable connectors which can be unscrewed to change the cable if required.

The traditional shape will appeal to those who prefer the more user-friendly cups of the SR-007 and 009 TOTL models from Stax, however, the cup and pad size is much bigger on the VOCE. Much of that is to do with the larger 88mm driver housed inside the VOCE which dominates the aesthetics in behind that web grill. Do note, however, despite the “nude” look, the drivers are fully dust sealed and insulated against the elements which are critical points for a good electrostatic driver performance.

Yet the larger size does not equate to more weight. The VOCE weighs in at just 330g which is a good 60g lighter than the SR-007 MK2 despite having the larger driver and cup dimensions. A lot of that weight reduction is due to what is happening above the cups.

The top half of the VOCE is the very familiar half-gimbal system used in their AEON planar design and the very light NiTinol memory headband design from both the Ether and AEON range. Two excellent features that take a lot of weight off the VOCE without losing an iota of robustness.

The gimbal is built form the same aluminum alloy as the cup housing rather than 3D-printed as well as using aluminum pivot rods. This is a very rigid design that you use in combination with the headband for rotation. The design is such that it really makes no difference if there are single or dual support points on the gimbal. The fit will be the same but size and weight is reduced.

It does not rotate flat or inverse but there is enough side to side movement to fit most heads. The NiTinol headband also moves in sync with the half-gimbal making this a fairly flexible and lightweight system. 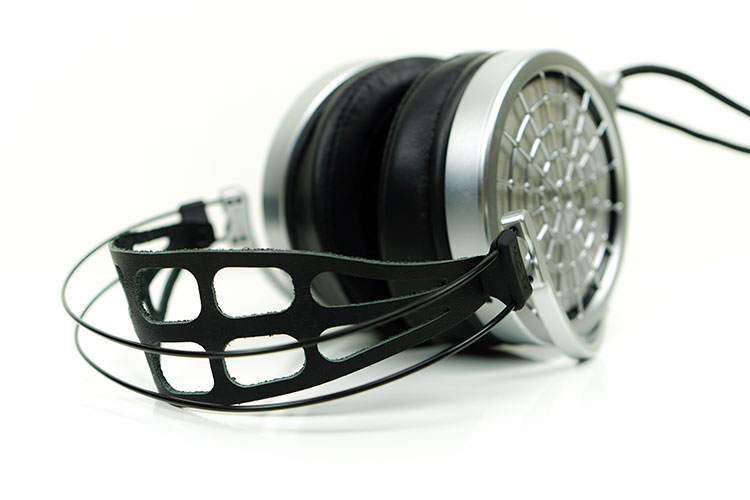 The NiTinol “memory metal” design carries virtually no additional or cumbersome weight. It also spreads the pressure really nicely across the head when in use and you can adjust it fairly easily on either side. I have a fairly small head so I tend to wear it at its smallest fitting but it stretches out for even the largest heads.

The vat-dyed leather inner strap does a lot of that pressure balancing in tandem with the headband. On the VOCE it now has a more “lattice” type design with large breathing holes compared to the single strap of the Ether and AEON. In part, the holes mean less leather and a lighter weight.

I much prefer this to the elastic finished Stax 007 Mk2 inner strap and headband system. There is no real adjustment that can be done on the Stax, you just stretch it with your head. As a result, the bigger the head the more pressure on the top. The NiTinol adjuster prevents that happening so the strap pressure is much more consistent no matter what size of the head.

The ear pads on the VOCE are made of Italian Napa leather and have different dimensions to both the AEON and ETHER range. They are damn comfy by the way and suppler than the thicker Stax pads on the 007 MK2. They are a little thinner though than the Stax but deeper and wider.

The sideways clamping pressure on the VOCE is a little stronger than the SR-007 MK2 but it does have downward pressure on the scalp and on top of the ears. The softer pad helps prevent that pressure transmitting into your head keeping everything very comfortable.

Not worth mentioning, but heck I will mention it just to state the obvious. Being a completely open design there is no isolation to speak off. Your main aim here is the long-term comfort which the VOCE delivers on.

The stock cable is a custom silver-plated copper variant, low capacitance round wire in a carbon fiber style weaved cloth jacket. Quite different from the flat cable structure of normal stats cables. It is deathly silent with zero microphonics and a very relaxed drape for easy management. The VOCE is a 560v pro bias unit so the cable is terminated with a pro bias gold plated 5-pin jack.

The jack looks pretty strong with a solid machined Teflon and aluminum housing finished in black and white. Unlike the Koss ES950, the VOCE will fit right into any pro bias electrostatic amp from Stax, Headamp or Woo and does not need an adapter for compatibility.

The VOCE does not have a ‘day-and-daily’ detachable cable which is quite normal for the majority of stats cans I have used. I think only the HS-04 from Kingsound used a detachable cable variant. Much of this has to do with connector failure rates with Stax being one of the staunchest defenders of not having electrostatic headphones with detachable cables.

However, I did say “day and daily” because it is advertised as having a detachable system at the bottom of the cups. MrSpeakers have provided a mechanism in the cable connector at the base of the cup to change the cable but it is a small amount of DIY work rather than a push and pull or locking system such as you would find in XLR or lemo variations. This strikes a nice balance between connector quality and having the ability to change that cable without sending the whole unit back to base.

Very cute thinking Mr. Clark. Instead of putting the whole thing into a cardboard box and spending ages unpacking the actual transportation box for the VOCE doubles as a display unit. What that means is as soon as you take it out of the shipping container you simply stand it up, take out the packing materials and put it on display. It is clever and it looks great.

Now I actually have some acrylic versions of these for holding two headphones per box, 16 in total to be accurate. I cannot stress how important that box is beyond aesthetics in terms of dust and elements protection. My own acrylic stand boxes do a fantastic job of protecting my best headphones from an otherwise harsh tropical climate full of dust and my beloved cat’s fur balls.

I will also admit that the hardwood finish is a bit more high-end than my own. The stand is made from real hardwood using similar acrylic front swing doors. Inside you have an integrated headphone stand and a small slot at the bottom to run the cable out. The VOCE wills eat neatly and upright in boxes stand and you can leave it open, closed, whatever way you like.

Apart from that, you get a set of tuning pads and what would a MrSpeakers headphone be without their tuning pads? That is rhetorical by the way people. The tuning pads we will explain in more detail in our matchability and sound section on the next page but in short, you get 3 pads with varying levels of attenuation in top-end presence or sharpness of the note.

Also tucked inside the package you also have a small hex key to unscrew and change the cable as well as a soft black cleaning cloth.