I am glad Lotoo tuned the LPGT the way they did. We need a choice at the flagship level, especially in tonality. This is a reference sound, a more linear presentation than either the Sony 1Z or the Cayin N8. The signature is largely about “getting out of the way” at its simplest level and a vast array of sound tweaking alternatives at the more complex level should you want more coloration.

Taken as stock without any EQ the Paw Gold is closer to neutral in tone and timbre. I say closer but not quite dead neutral or overly clinical in its delivery.

There is a faint whiff of warmth in its low-end and lower-mids just to wet the attack and prevent it from sounding hard, brash and unforgiving. However, not so much that it would break the overriding perception of an uncolored performance. Certainly not as punchy and weighted as either the N8 or 1Z but nothing so lean as to rob instruments of accuracy and enjoyable levels of detailed texture. If there is a perceived level of punch or a planted sound it is going to be coming from your head gears tuning rather than the LPGT.

I do enjoy the treble tuning on the LPGT a lot and it does deliver a very nice sense of harmonic balance in its instrumental timbre. There is a slight forwardness, especially in the lower-treble that made its presence felt with the likes of the CA Solaris and Hifiman’s Ananda. I find that balance essential for good instrumental clarity and the LPGT does have bags of that.

Yet at the same time, the body on the treble is excellent. Nothing peaky or lean about the top-end on the LPGT which suggest the absolute upper treble has a very fine level of roll-off. Enough to just prevent sharp overtones turning up in high-pitched percussion strikes and maintain a clean but refined vocal timbre on treble sensitive IEMs.

I don’t think it has the muscular low-end depth of its competitors to sound truly holographic on a grand scale. For me, the N8 and 1Z have the edge there. However, it does have excellent left-right separation and staging width with a fairly airy top-end. What depth there is more defined by its excellent texture and detail.

Within that soundstage, the LPGT does exhibit a fantastic level of resolution and control, especially in its imaging. We tested Annette Ashvik’s imagine champion track ‘Liberty’ and it is very clean, clear and precise on the LPGT. You do not miss a single nuanced creak of a door or click in any area of the Touch staging. The only thing that will hold you back is your own monitor.

It helps a lot that the LPGT has a very black background and excellent dynamic range, especially with XRC switched on which we will explain in the next section below. Switch that on and spatial cues in the LPGT imaging performance just pop out in a very vivid and energetic manner.

You can upsample tracks up to 768kHz via the XRC function. You can access XRC via the drop-down menu with a single click or go deeper into the play settings menu. I actually quite liked the XRC function on the presentation of the tracks and I do advise you stick that on whenever possible.

It might suck a bit more juice out of your battery life since it pulls from the secondary AK4137EQ DAC but the payoff seems to be a higher level of dynamic range especially in the lower registers and the midrange. The sub-bass presence is more fleshed out with better texture, instrumental timbre has a slightly more liquid tone to it in the lower mids and the treble has a bit more headroom. Definitely a more ‘vivid presentation’ with XRC on over off.

I am on the fence with the Touch balanced performance. Why? Well, because the output power on both single-ended and balanced 4.4mm are the exact same on the LPGT at 500mW into 32Ω. I do understand though that these are two different amp circuits but the tonal variations are nuanced.

The key difference is in the quality of the signal in terms of dynamic range and SNR/lower noise between both chipsets There you will hear those nuanced improvements going balanced but you will not get a boost in output power or volume. For casual listening, you won’t hear a huge difference as you do on the N8 or even the lower-powered 1Z.

Some might have wished the balanced had more or the unbalanced had less. Certainly, the marketing team at Lotoo might have found it easier in today’s flagship market to be able to point out a difference that is easier to understand.

This is where the LPGT pulls way ahead of the competing flagship players and in my mind a key or unique feature-set of the Lotoo OS and its tonality.

You have 4 different ways to shape the sound of the LPGT. Digital Filters (PCM/DSD), ATE, PMEQ, and XRC, or upsampling, (explained above). Most of these make a noticeable difference to the Touch presentation.

This is a legacy feature from the original Paw Gold called ‘ATE’ or ‘Acoustic Timbre Embellisher’. You can access the default filters via the playback screen. This type of filter markedly adjusts the tone of the LPGT and there are 2 that are fairly obvious with their ‘Bright’ and ‘Sweet’ labeling.

With ‘Sweet’, you get a wetter fuller sound with slightly less top-end presence. With brighter, you get more treble presence but less low-end weight and richness in the timbre. Next, you have a range of titles that sound a bit wackier including ‘Dental’ which places a lot more emphasis on low-end body and sounds the slightly darker of the three.

The next two are called ‘Style 701’ and ‘Style 990’. Style 990 injects a lot of bass bloom over the mids and top-end and sounds a lot more veiled than Style 990 which is very lean, flat and neutral sounding without much bass at all.  The last two seem to mimic speaker positioning. Both are called ‘Diffuse field” with one being ‘Near’ and the other ‘Far’. Near does sound a little more intimate and up close than the far.

PMEQ a full-on customizable parametric EQ with a number of presets to choose from. It is quite a complex tool for those used to regular EQ applications. This looks like a full or at the very least a quasi-PEMQ solution to me with control of the gain (boost/cut in dB) for each frequency band, the center frequency of the midrange bands, and the cutoff frequency for the low and high bands.

If you feel a little overwhelmed there are 8 presets already done for you by Lotoo and you can access them during playback alongside the ATE options.

Digital filters are the stock in trade of modern DAC chips and the AK4497EQ is no exception. These cover PCM and the LPF of DSD tracks. You get a total of 7 filters all targeting the amount of roll-off and delay in the presentation from sharp to slow (super slow).

For DSD, you can adjust the low pass filter through a normal or extended option. I tend not to fiddle too much with these as the audible differences are incredibly subtle or barely noticeable compared to the PMEQ, XRC and ATE options.

The LPGT is one of the best performing DAPs I have ever tested for noise with efficient IEMs. Now with the original firmware, I could detect a little hiss on my most sensitive pairings such as Phantom, Solaris, and Andromeda.

With the new firmware, the noise floor is impeccably low with very accurate channel separation and balance at low volume levels.  Certainly, the noise floor is much lower than the N8 (on any of its output stages and gain settings) or the Sony 1Z in low-gain (balanced or unbalanced). The AK380 comes a bit closer but again, the LPGT just that bit quieter overall. Very satisfying.

If you are after a fairly black background for sensitive IEMs at this level then the LPGT is leading the pack in my estimation. There is absolutely no problem with power either for hungry IEMs such as RHA’s CL1 and the 182Ω oBravo RA C-Cu.

The C-Cu synergy was actually quite nice. Given its reference style tuning, I was concerned that the LPGT treble would be far too peaky but it was not the case here. It felt solid, yes, but not too tizzy or lean. I still think the tube output in High² from the N8 is the smoothest of pairings with the Ra but certainly miles ahead of the digital peaky treble from the 1Z pairing.

Because of that largely reference and very transparent tuning, combined with the low noise, the LPGT is quite a flexible source for just about any IEM you can throw at it. My own personal favorite was the JH Layla in combination with either the EA Leonidas II or Plussound Tri-Silver. The level of clarity, detail, and dynamic range on this setup was impeccable. No shortage of headroom either which is often an issue with the stock cable on the Layla.

If anything, and I am nitpicking here, that slight treble forwardness and neutral low-end might not suit those who like their DAP to be on the punchier side. If the signature comes across as a bit too neutral I suggest throwing on the ATE DSP and put it in ‘Sweet’ or ‘Dental’ mode and you will thicken up the timbre or add some substantial bloom to the low-end.

A good example of that is the Vision Ears VE8 which has excellent sub-bass for an all-BA design and is pitched as being a punchy musical sounding monitor. Personally, I think with ATE and PMEQ off the signature is clean, well defined and quite transparent. However, for those who like much more low-end presence, perhaps even more V-shaped then the ‘rock’ PMEQ settings is a heck of choice.

If you want a bit more warmth on the low-end of the VE8 from the stock sound but not quite as aggressive as the PMEQ setting then ATE Style 990 or Dental will do the trick. I am not a fan of the Style 990 with the VE8 or any monitor though, sounds too veiled for my tastes despite the low-end weight. The dental will fatten up the low-end without too much top-end shelving down. 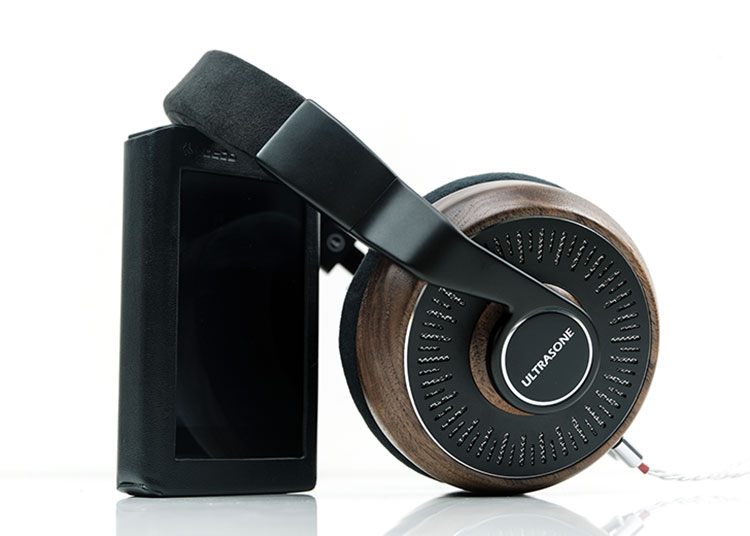 500mW into a 32Ω does mean the LPGT is quite suited to headphone users also up to all but the most demanding of headphones. When I say most demanding I am talking Hifiman HE6 and Susvara that do need a quality desktop with plenty of power to scale properly and sound ‘correct’.

However, quality planars like the HE1000 V2 and more specifically the Ananda will sound great on the LPGT. The HE1000 V2 sounds like it has plenty of headroom on high-gain unbalanced (60-65 volume) and does not sound overly lean or lacking in dynamic range. Low sensitivity headphones such as the 32Ω Ultrasone Edition 11 will also pair quite well with the LPGT with no issues on power, sounding suitably punchy and clear even in low-gain.

The Ananda sounded like the right balance to me on the LPGT. Its slightly less aggressive highs suit the LPGT perfectly. You can also drop it to a high volume setting in low-gain rather than go high-gain as it is not as demanding as the HE1000 V2. You can also add a touch of ATE or PMEQ to fine tune the response.