Luxury and Precision flew onto the audio scene last year with their excellent sounding L5Pro portable player, but I have a lot of concern about their new budget L3 model…as well as their business outlook and how they’ve been handling firmware releases lately. Can their new L3 measure up to the competition from iBasso and Fiio at the $400 and under price tier?

Carbon fiber is awesome, but why is it needed or even desired in a mid-tier portable. This is a material most consider a “luxury” option that has no real world practicality, it has nothing to do with sound quality. I’d rather they just give me a normal metal backplate instead of one that has some of this carbon fiber…how am I supposed to appreciate it when it is never facing me and usually covered by the nifty case they’ve included for the unit? What a shame. If you are going to use this type of material, I’d rather be able to see it at all times than not. For what it is, I suppose it is fine but I question how much cheaper the product would be without any of that carbon fiber included.

The design overall is a smaller reflection of the more expensive L5Pro model, but with a few minor tweaks and angular alterations. It still feels excellent in the hand and screams solid aluminum build from top to bottom. The screen is still pretty good, but again nothing nearly as vibrant as the life changing beauty found in the Calyx M’s OLED monitor. For $399 though, the L3’s large screen looks and feels well above average in quality. However and despite it being a touch screen, it is firmware locked for touch swipe functionality at the moment. This is a common trend in this review, so forewarning: there will be a lot of banter around my anger towards them for locking core functions for no apparent reason. 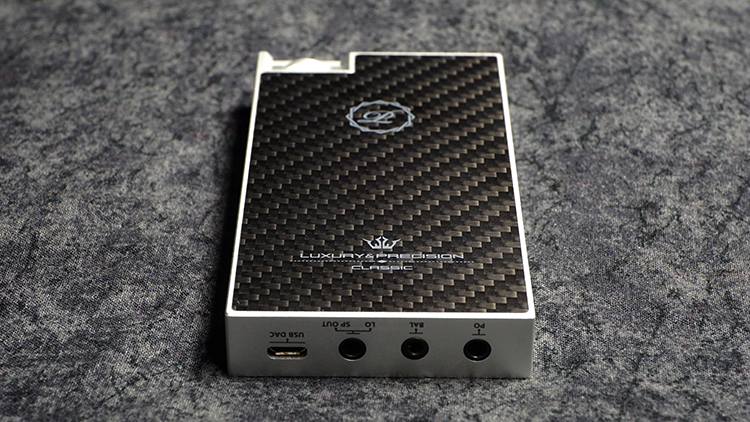 You get one microSD card slot, a normal 3.5mm output as well as a balanced 2.5mm output. Balanced options at this price point seem awesome when you consider those possibilities, but know that this player shells out 2.4v into a 32ohm load. What that means is that you’ll burn out the battery in a few hours using the balanced output with anything that isn’t designated a portable headphone.

Balanced output portable music players bother me, the battery technology right now is just not up to par with our needs when it comes to higher output driving power via a balanced output that is double the power of the standard 3.5mm right next to it. It is a great feature for those with mid-tier headphones that were recabled with a 2.5mm Balanced connector, but is that really a common way to balance headphones these days? Just because Astell and Kern did it and designed it into their players does not mean anyone else should. 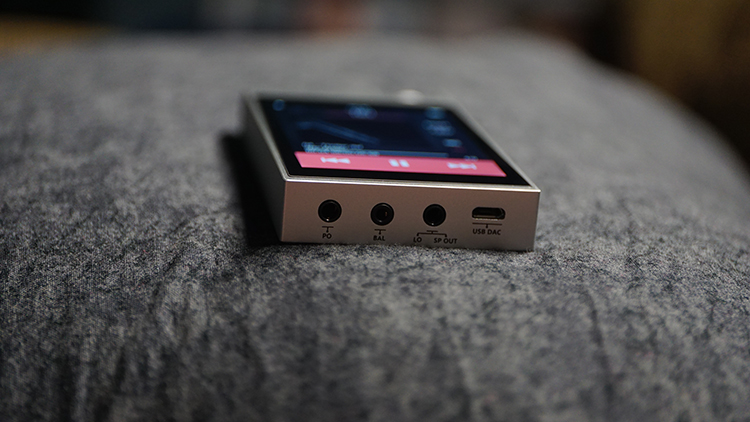 But, I digress. If you have a balanced 2.5mm cable, great! If not, you’ll shell out $150+ for a recable job, maybe more if you are into the custom cable thing. At that price, why bother to buy a mid-tier DAP that isn’t justified for usage with higher end equipment in the first place? Don’t expect all day performance, but do expect maybe 4 hours of balanced output on an efficient headphone and more like 9 with the normal 3.5mm.

Look, I have an issue with companies who completely ignore their entire consumer base and it seems Luxury and Precision are now one of them. When they released their L5Pro last year, some features were locked and utterly neglected. Riddle me this: why would iBasso and Fiio include incredible basic functions upon release, but Luxury and Precision refused to do the same? The designers in this company used to be part of the Colorfly team, so they have a lot of experience in the field of coding UI and designing wonderful sounding music players.

They certainly made a great sounding DSD player in the L3, but I feel none of them actually use the Colorfly DAP’s when they were part of that team a while back and also do not use Luxury and Precision DAP’s now. Odds are great they are using iBasso, Fiio or Astell and Kern DAPs. Actually, scratch that, I think they are still using CD players for their portable needs and think the rest of the world of audiophiles only wants to listen to one album at a time and not a mix of tracks from various artists. I say that because out of all the DAP’s they’ve made so far, they have completely ignored Playlist support despite everyone who buys their product begging for it upon the release. This is a common trait with Asian brand DAP’s and I just don’t understand why anyone stands for it. 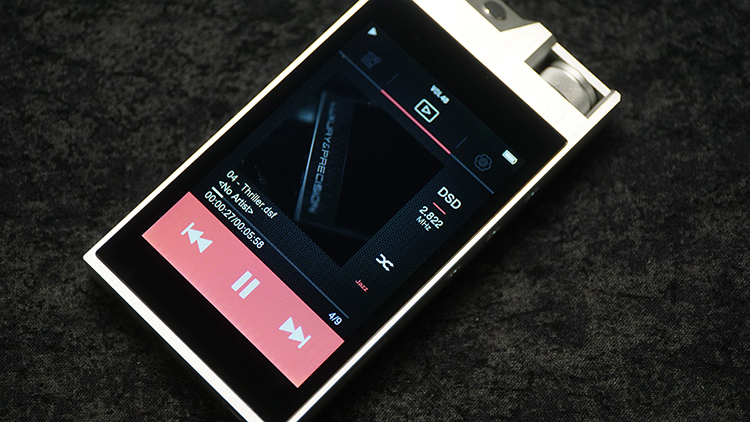 I do not want a great sounding file browser. I want a portable musical experience and the ability to customize my own mix of Playlists as I see fit. If I want this track saved to a Playlist, I should be able to do so. But, companies like CalyX and Luxury and Precision are so out of the loop, they think we should just get a file listing via All Tracks, Artist and Albums and nothing more. Want to listen to Weird Al at the moment and then switch to Maroon 5 immediately after? Too bad, you’ll have to cycle back out to the main menu and search for the individual track one by one through the Album or Artist folder. God forbid you try to find it through All Tracks! If you are like me and have thousands of files on that SD card, you are SOL and will be tapping that down arrow until tomorrow to get to something late in the alphabet in its titles first letter.

This isn’t okay anymore. This isn’t 2003, a time where new MP3 players were basic and didn’t have any Playlist support. This is 2016 and this company has put out a few models already through two different companies. Still no .M3u support yet my iBasso DX90 from a few years ago has no issue with this and also, of course, included Playlist support promptly. Luxury and Precision locked out the 24bit file playback when used as a DAC and is currently locked at 16bit. Why? Dunno…but it upsets me that they want to rush the product out to consumers before actually completing it and making it great upon release.

They’ve told me the next firmware will only support AAC and touch swipe. The portable files that are 24bit off the micro SD card are functional and sound great, DSD sounds GREAT on this player, but they’ve locked the USB DAC’s 24bit functionality, Playlist support and have opted for and…jeez…AAC/touch swipe for the first firmware update. By the way, still no custom EQ option? The Sansa Clip from years ago that cost $35 had a custom EQ. My God. I’ve had just about enough of this. Oh also, album art doesn’t work unless it is embedded into the file itself, meaning if you drop an image into the album folder, it won’t register it as album art. The simple fact that I might have to individually embed an image cover for every album I have…makes me want to jump head first out of a moving vehicle.

Credit where it is due: Yes, I hate the UI overall, but I must say that the L3 is the fastest DAP I’ve ever used when it comes to loading a 200gb micro sd card. It is leagues faster than the iBasso DX90 and only takes 45 seconds to perform a full media scan. Still not as fast as the Rockbox custom OS I have on my DX90, but definitely faster than the stock Mango OS of the DX90 with regard to scanning speed. I am seriously impressed by it and it bests the CalyX M something fierce in the speed department. However, this means little because Luxury and Precision put the Media Library Update button right on the damned front menu screen. I’ve accidentally pressed it so many damn times that I want to toss it out my window and discontinue using the product every time it happens.

“Oh, man! This .DSD file sounds so great ahhhh dammit! I touched the Update button. Son of a…”

“Shoobie doo bopp bahhh, gosh this sounds so great, but since there is no Playlist support I’ll have to press the Back button and cycle to another specific track I want to hear on another album ahhhhh damnit! I did it again.” 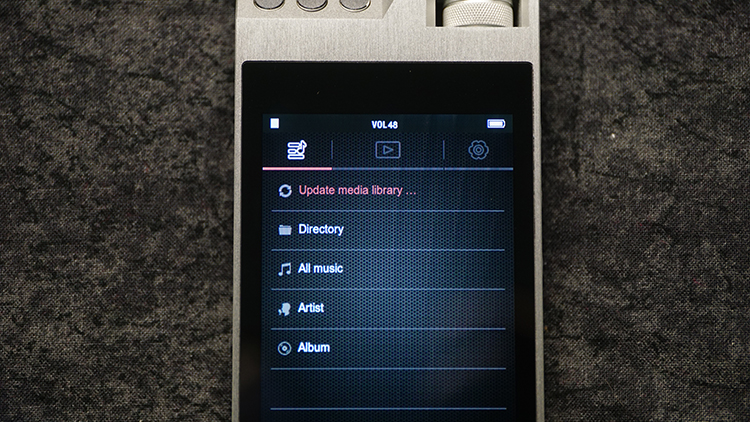 Why the hell is this button front and center on the main menu!? This is supposed to be in Settings, away from the possibility of ever accidentally hitting it and stopping your music to perform an almost minute long update. If that isn’t enough, the numerical value of track listings is limited to 6000 files. I have more files than this on the SD card, my iBasso DX90 registers over 7500, but the L3 always says there are only 6000 available.

If that isn’t enough to boil your blood, know that you can’t cycle back to the previous track if you are using Shuffle mode. Skipping through some tracks and see something you want to listen to, but accidentally tapped once over what you should have? Too bad. The L3 shuffles back and forth. This is one of the most annoying things in the entire L3 experience that I’ve come across. I have no problem in this area with my DX90, I can cycle back to the previous track while Shuffle is active because the iBasso coder is awesome at his job. But, I cannot do that on the L3…and this is something I’ve whined about as a problem inside the L5Pro for almost a full year!

The reason I am griping so much here is because all of these gripes were included in my L5Pro review LAST YEAR. They didn’t listen to me, they didn’t listen to anyone else who bought it and also found all of this annoying. So, I am at a crossroads here. I have a great sounding portable player that has some of the most annoying experiences I’ve ever come across in my long years as a reviewer. The L3 was rushed out before it was actually completed and the UI is suffering for it. What a tragedy.