The InEar StageDiver 5, or simply the SD5, is a brand new 5 balanced armature driver universal IEM that can come in two types of wood. It retails for €949.

Disclaimer: Two units of the InEar StageDiver 5 were sent to me in exchange for our honest opinion in this review and were returned shortly after.  Many thanks to InEar for giving us this opportunity.

Early this year the German company InEar GmbH announced the latest addition to their successful StageDiver universal IEM series. Equipped with 5 BA receivers in a three-way crossover, the StageDiver 5 is the new top of the line performer of the series.

However, they are following their latest huge success, the InEar ProPhile 8. The PP8 are still gaining popularity as reference neutral-tuned monitors on the market so it will be interesting to see how the cheaper SD-5 can compete.

I received two review units at different times. However, both did not include the final packaging. As far as I can tell, InEar recently updated the outer packaging to a more consumer-oriented approach that looks better on shelves. For reference, I am using this picture from MYEAR Taiwan. 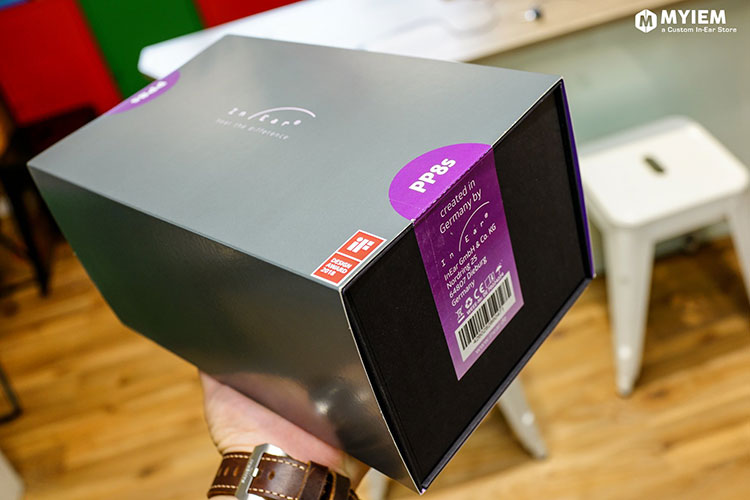 The default case for the StageDiver 5 is the same as for the ProPhile 8, namely the PELI Protector 1030 Micro. Personally, I think it’s too big for a single pair of IEMs but it can be useful if you want to carry accessories or something like a small Shanling M0 DAP with you. StageDiver 4 and below use the more common Peli 1010 case.

InEar also sells a better-looking case separately. A black round leather case is available for 39.90 €. It has purple stitches to match the company’s color and their logo is punched onto the surface. The inside is padded with velour and should protect your IEMs adequately – as long as you do not decide to sit on it. I think this case feels more premium and should be the default option for hifi consumers.

InEar includes 4 different sizes of black silicone tips. The default tips feel a bit plastic-y and I don’t like the stiff texture of the rubber too much. I have also had one tear apart on me when trying to remove it. Luckily, InEar also includes a set of Comply Foam and superior SpinFits. Both, Comply and SpinFit, protrude a bit so they make deep insertion of the IEM more difficult.

It would like to see InEar switch from the SpinFit CP-100 to the CP-350 which are considerably shorter and allow a deeper and more snug fit closer to that of a CIEM. FYI, it is possible to squeeze the smallest included Comply foam tip beneath the SpinFit CP-100 size M or higher. That way you can create your own hybrid silicone-foam tip with great isolation.

I think perhaps the Final E tips are also worth a purchase for the StageDiver. Compared to the stock tips they isolate a bit better but also cut off some of the treble energy. Some individual experimentation will be necessary.

Back in early 2017, when I reviewed the ProPhile 8, InEar still used Plastics 1 cables. However, shortly after, they changed their supplier. Unfortunately, the new cable is simply a knock-off that looks and feels the same. It also has the same physical properties, namely an impedance of around 1.6 Ω and a re-wired mass signal at the y-split. Both are not ideal by hifi-standards and I urge InEar to search for an upgrade solution for audiophile users.

The stock cable I received is transparent but I also have a black version. If you stick to the stock cable, do choose the black one! The transparent option has a milky and slightly yellow tint. Furthermore, the copper corrodes over time and takes on a green color. After some use, it just doesn’t look that good.

The second review unit I received came equipped with a Han Sound Zen cable. That is definitely a recommendable solution. At the very least it improves crosstalk, which is quite audible with the SD-5.

Sadly, InEar is not an official supplier of Han Sound and you will have to look elsewhere to find an upgrade cable. Although the Zen cable shows up on some pictures, the review is based on the default cable unless stated otherwise. Compared to the stock cable, the Han Sound audibly improves crosstalk and channel separation.

Also in the box, you’ll find an unbalanced 6.35mm adapter, a drying cap, replacement filters, and wet cleaning cloths for single use.

The StageDiver series and I go back a long way. I actually pre-ordered the SD2 and SD3 back in 2013 and I have ever since been a fand of at least the StageDiver 2. But even 5 years ago I was suggesting to InEar that their IEMs need at least a logo.

The StageDiver has always been extremely low-key in aesthetics and it was only available in a very dark glossy blue (almost black) color. Even the ProPhile 8 didn’t change much design-wise. (It does come with a dry texture instead of a glossy coating.) Still, it seems InEar wants to hold on to the completely unbranded and naked look. 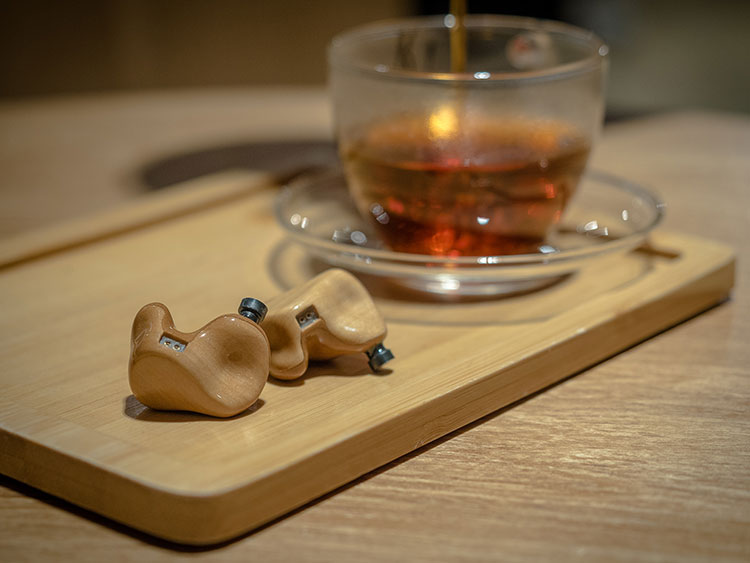 However, InEar now offers design choices. Actually, I remember they introduced wood faceplates for the StageDiver series some time ago, but they aren’t as attractive as the faceplates from competing CIEM manufacturers.

The StageDiver 5 is the first monitor that is available in four different real wood shells and not just the faceplates. This is a definite visual upgrade! The darker one on the pictures has ebony wood and the lighter color is from pearwood. Also available are cherry, olive, and walnut.

Clearly, the wood design was meant for us, the IEM enthusiasts that see more in a product than simply a tool. We are passionate about our gear and we like to show it off. But how come the wood design still does not have a gold or silver logo on the faceplate? Instead, the wood is completely unbranded. The review unit doesn’t even have a serial number and a novice wouldn’t know how to tell who the manufacturer is.

Apart from a logo, I would have liked to see some more details, for example, a nozzle that is not 3D-printed and black. I think silver or gold metal would have worked very well.

The pearwood has a glossy coating, probably for protection. At first, I didn’t really dig the sand color, but I have to admit that it grew on me once I replaced the cable. I think the clear cable is not a good fit and I recommend to choose a different color instead.

The ebony-wood looks completely black most of the time. It does not have any protective coating and actually feels like real wood. The texture comes through nicely on the pictures but lying on my table I occasionally mistook them for the all-black PP8. Going by pictures, I think walnut and olive will be the most popular choices.

It’s all about the Tubes!

Usually, I would not have thought about mentioning that this is important. However, I have seen users tricked by their mind suggesting the material of the housing would have sonic effects on the IEM. This is definitely not the case here!

Balanced armature receivers work differently than conventional drivers as they direct the sound into a tube directly, forgoing any enclosing room influences. It doesn’t matter whether the BA receivers are surrounded by plastic, wood, metal, only by a shrinking hose or left completely naked as long as the tube is the same.

There is only a minor difference to consider with vented BA receivers of which space can influence the bass quantity, but do not expect different levels of warmth or detail depending on the wood you choose specifically for the StageDiver 5!

Here’s a missed opportunity by InEar. The StageDiver 5 is very lightweight and subconsciously you’d expect wood to be heavier. I am convinced many people wouldn’t mind some more weight because it feels more premium. I think InEar should have increased the weight of the wood design, even if they only put rocks or something into the shell. One side only weighs 5g (including ear tips).

Nevertheless, putting my personal design preferences aside, the build quality is good. You can tell that the shell is put together from two pieces – the wood grain makes it easy to see. But there is no reason to believe that the shell could come apart. The recessed sockets feel tight and provide great support for 2-pin cables. The user-replaceable ear wax filters are still there, just like with the very first StageDiver five years ago. 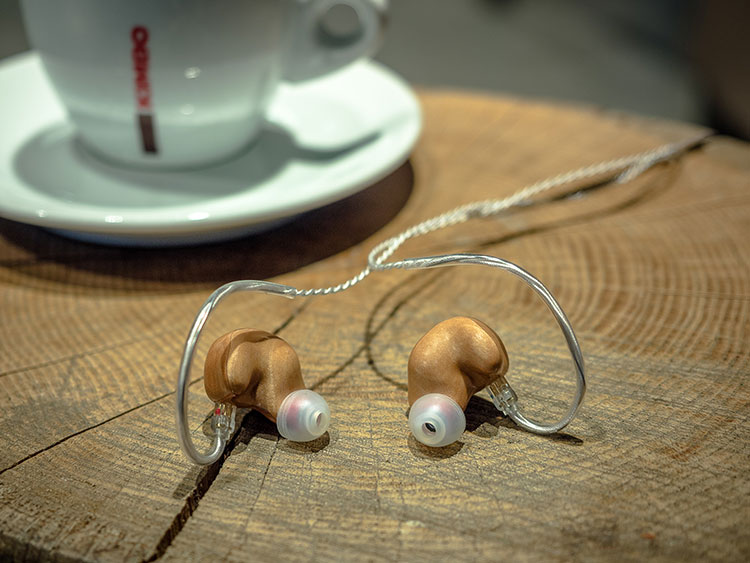 By now you may have come across a unit from the InEar StageDiver series and tried it yourself. Not only was InEar one of the first to take this full concha universal approach, but their research data of over 500 measured ears back then still proves to be the standard of exemplary IEM comfort today.

Thus nothing has changed in 5 years and the SD-5 are just a good fit as any other StageDiver. The ProPhile is a bit bigger in size. Smaller ears also have the option to go for the SD-5S which was designed for a higher compatibility with smaller ears.

As a product tester, I feel like I am obliged to mention this. As I said, I received two review units and this is why some pictures show the StageDiver in a light brown color and one in dark brown.
In early March I received an SD-5 which had the wrong internal wiring. On the first day, I noticed that the polarity was off.

This is easy to fix if you also change the polarity on the cable, but I think not all users might notice this or don’t know what twisted polarity actually sounds like. In fact, the twisted pair I received had been reviewed twice before me and nobody noticed that the internal wiring was bad. Normally you should not expect such an issue and I am sure it is a rare occasion and perhaps even an isolated case.