The amplifier section of the Beam 3 Plus is surprisingly capable of pushing all of the gears I threw at it. With the 32-ohm TinHifi T2 Plus IEM, setting the dongle to its lowest gain required it to be at 35% volume for normal listening level.

For full-size headphones, I tried the low impedance Focal Clear MG and reached 60% in low gain. Stretching the Beam 3 Plus a bit, 50% volume is where I landed with the Audio Technica ATH-ADX5000 while listening in mid gain.

Using the warmly tuned MM2 from Hidizs lifted the bass slightly as the dongle injects its smoothed-out character into kick drums. The ADX5000 on the other hand blended better with the technicalities of the Beam 3 Plus for a hint of friendliness in tonality and control of the stage.

What I liked best is the reference-sounding Sennheiser HD560s which were initially lacking in coloration and with a slightly emphasized upper midrange and treble, the Beam 3 Plus evens it out without appearing unnaturally out of character. The midrange increases in breadth which supports the strength of the headphone.

Similarly capable with music playback, the ES9281AC Pro in the Beam 3 Pro is also meant for rendering MQA files and accepts up to 32bit/768kHz PCM and DSD512. Although, a notable convenience offered by the Beam 3 Plus is missing, having a Bluetooth mode.

Where it remains as competent is the single-ended only amp stage that has a 2-stage amplification to match the requirements of full-size cans and high impedance IEMs. With three gain levels, its output power can reach 150mW for 32-ohm loads.

The design of the Beam 3 Pro is more or less the same as what Hilidac did with the bigger housing of the Beam 3 Plus. With a similar placement of inputs up top and outputs at the bottom, the matte finish of the chassis further ties the two devices as coming from the same family.

Seeing the same Beam 3 initial in both units is interesting as Hilidac can play it safe by differentiating the two only in features or also in sound.

Close in presentation, but the bass is noticeably lacking in texture when compared to the airier capability of the Beam 3 Plus. It has a less prominent placement which is harder to isolate when images combine rather than properly disperse.

It has a less sweet and fetching midrange but is more forward sounding. And like the Beam 3 plus, it generates pleasant female vocals with a characteristically strong effect with decent amounts of air.

Metal drums are more metallic on the Beam 3 Pro while retaining the same amount of detail and emphasis. While less accurate in placement and stage, it has a similar height as the Beam 3 plus. 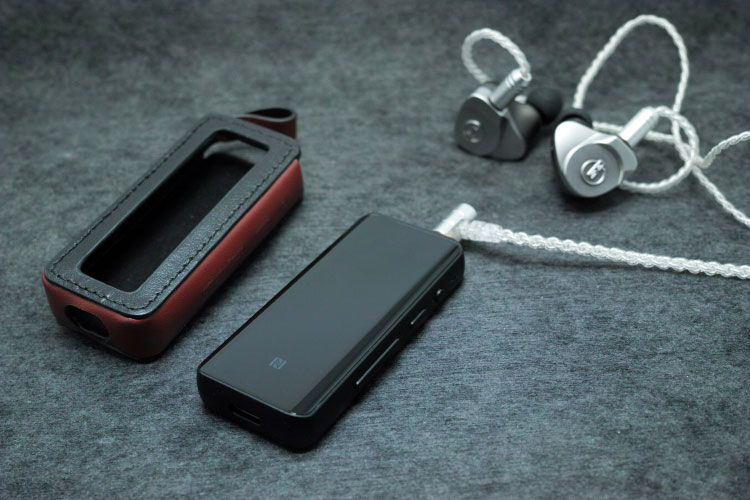 Earning a wide user base since it was released, FiiO seems to have nailed the desires of its customers by bundling with the BTR5 a long list of features that are quite hard to get for its price.

Handling digital to analog conversion, two ES9218P is installed coupled with XMOS XUF208 USB chip and Qualcomm CSR8675 Bluetooth module. While not capable of MQA, the BTR5 can still manage 384kHz PCM and DSD256 with one-touch NFC for faster Bluetooth pairing supporting a wide variety of formats up to 96kHz.

As hinted by the dual DACs, the internal of the BTR5 is balanced featuring a 2.5mm jack and outputting 220mW at 32-ohms. For portable use, it has a smaller 550mAh battery with 9 hours of battery life.

Where BTR5 gets ahead is the availability of a companion app and the presence of a 0.49-inch OLED screen that displays settings such as car modes, filters, EQ, USB mode, etc.

Next to the Beam 3 Plus, the BTR5 is smaller in all dimensions and at a glance is slimmer and easier to grip between the two being encased in a tastefully curved front and back glass panel. The reflective black exterior of the BTR5 can also be seen as more upscale with fewer features breaking its design saving all controls to the available display and the buttons at the right of the unit.

The output ports are made more accessible for on-the-go listening by placing them on top. Found on the bottom is an equally forward-compatible USB-C for wired listening.

While the bass kick of the BTR5 is weaker than the Beam 3 Plus, to its benefit, it is the cleaner sounding of the two. Its fast initial thump is followed by a softer but more defined rolling sub-bass.

Those that like midrange will enjoy the neutral but bolder piano strokes of the BTR5 although it is slightly behind in air and detail retrieval as it emerges smoother. Brighter female vocals are coming through as more energetic and with better control in transition from the upper mids to lower treble.

Horns are more dynamic and livelier as the Beam 3 Plus mutes some information on the extremes. Snare drums benefit from the lift in energy as well as audience claps can appear crisper.

Although, the BTR5 is more closed in compared to the stage width of the Beam 3 Plus. But the placement of treble and bass notes is an improvement due to its tidier quality.

This hard-to-find Bluetooth DAC/Amp from Qudelix is packed full of features that earned its place in the audiophile community. And while peculiarly simpler in exterior, it hides an extensive set of customizations once paired with the Qudelix companion app ranging between software and hardware enhancements.

It is using dual ES9218P in the DAC section which receives its signal from a QCC5124 Bluetooth chip from Qualcomm. The 500mAh battery can last between 6 to 20 hours depending on the settings and load put on the device.

Sporting both single-ended and balanced connections, the 2.5mm output of the 5K is capable of up to 240mW and will use the dual DAC installed. However, when the 3.5mm jack is being used, only one of the two ES9218P chips will be utilized.

It is easy to dismiss the design of the 5K as inexpensive as it uses an all-plastic build that is quite hollow to the hand. Whereas the Beam 3 Plus is denser and bigger, the 5K boasts its 9V energizer battery size equivalent that is very small when compared.

The buttons that glow either blue or red placed near the top of the unit aside from being a bit wobbly can also be accidentally pressed when pulling out cables from the two outputs. Although, I liked the half dB increment of the volume button which smoothly increases when held down.

On faster attacks, the bass of the 5K is as incisive as the Beam 3 Plus. But, recreating the deep and slow bellowing of horns, the 5K loses the original timbre of the instrument with clumsier detail retrieval and lack of room.

Singers are depicted in a neutral and less emphasized manner performing further back in the mix. There is more power and subtleties with cello on the Beam 3 plus sounding sweeter.

Although horns are generally more shouty when performing higher notes, playing saxophone can still be flowing and not piercing. With a difference in tonality, the 5K is less metallic and shimmery and has a more smoothed out microdetails.

Both units do not feel congested in the staging department but are still a few steps closer than their desktop counterparts. While very close, the 5K is more even and spread out in placing images from left to right.

Just shy of breaking the $200 budget, the Beam 3 Plus offers on the go flexibility as well as enhanced wired technicalities which are well within expectations of a biscuit-sized dongle DAC/Amp.

Here, there is a managed balance of smoothness and flavor which gives it a pleasing personality during longer listening sessions. Though where it could be improved upon is the texture on the lower and upper regions that doesn’t play too well with busier songs.