So when FiiO very kindly offered to send me over their new E11 headphone amp last month I whooped for joy since the initial online feedback was very positive indeed. I also thought it was about time there was something a bit more precise and powerful than the E5, which while being great for starters into the mobile audio world, really can’t cut it once you get the thirst for upgrading. In fact in our local forum the E5 is often the first to be sacrificed in the quest for bigger and better. How nice now you can actually upgrade to another FiiO product. How ridiculous though that the upgrade price for this amp is around $60! Let me go on record now and say for $60 there is no mobile headphone amp in my mind that can compete that is off the shelf and as compact as this.

But is it any good? I mean cheap is one thing, small is another, but cheap, small and good quality all wrapped into one package has got to be the up-grader’s wet dream! As someone who has a penchant for collecting little headphone amps I considered it my civic duty to find out. 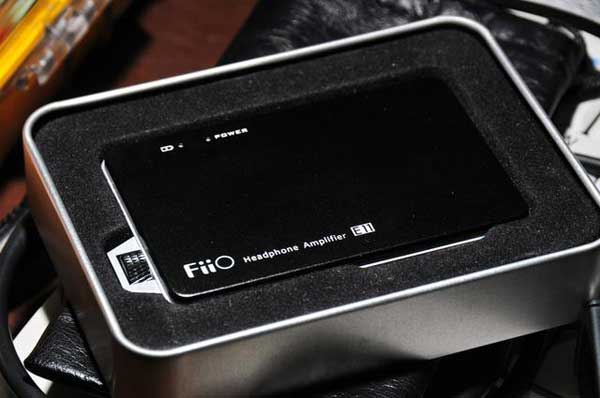 Now Fiio have gone through some subtle changes in their packaging for export markets. When I first stumbled across their little E5 and had an early E7 they had a lot of plastic and the E7 needed a degree in Origami to get it out of the box (and I never figured how to get it back in again). Flash forward to 2011 and gone is the nasty plastic for the E7 and in comes a nifty cardboard box much like Apple’s Iphone and in the case of the E11 they went one step further with a nice little tin can. I sometimes wonder if this is a tongue in cheek nod to the CMOY tin box amp of DIY lore and to an extent I bet you could take the FiiO E11 tin and make a fine CMOY out of it (maybe I will!).

Taking the amp out of the can the first things that come to my mind is that it is small, light and very well built. It is a mixture of contoured plastic and metals in a slimline body of similar length from to head of the E7 but decidedly slimmer. It also has some unique features that give it an edge in a very competitive category quite apart from the price. The volume pot itself is covered by a plastic guard which is fantastic for the prevention of accidental knob slipping and should protect your ears from the normal accidental volume change when on the run. Good for the ears in that respect. 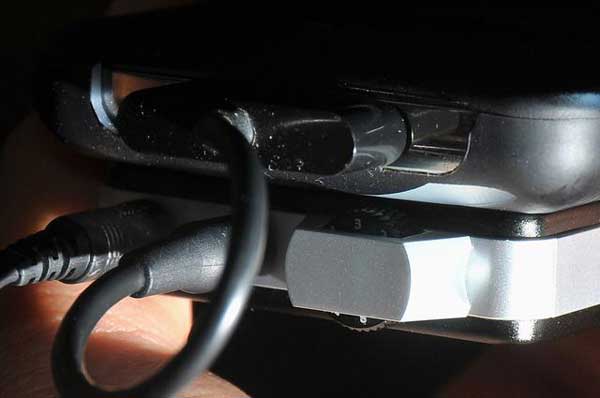 The second unique feature is the battery. The claimed battery life is excellent and in some tests it can run anywhere from 10 to 20 hours plus depending on the configuration you want to run it with. The battery itself is in actual fact a swappable BL-5B. Yes a mobile phone battery with a power rating of 800mAH, much as you would find in the back of a Nokia. You just slip of the back cover and out it comes. No fiddling with screws and odd PCB board adapters. Now if the battery craps out all you got to do is head to your local phone store and buy a new one for a few bucks and you are good to go again. This I like and doing away with the traditional round AA or even the AAA style means you get a thin compact headphone amp in return.

Now most amps have the usual standard array of external buttons and a volume pot, namely gain, on/off and maybe at the back a charger button. In some cases like the C&c X02 and the Go Vibe Vulcan+ you have some neat effects switches but then your heading north of $200. The E11 on the other hand has inherited some legacy quirks from the E5 and also added some eq buttons also and still stayed well under $100. On one side you have gain low and high and 3 EQ settings all controlled from two tiny switches. At the front there is just the volume pot and underneath the battery you got a nice tiny little low/high power switch. Any type of configuration naturally is going to impact your battery life depending on what your favorite is. Mine is high power naturally with low gain and eq set to 0 or 1 (or 2 when listening to Deadmau5!). I like a bit of slam in my tin so I make no apologies and yes the battery life will be reduced but still can achieve over 10 hours. I suspect given the popularity of the BL-5B you could probably get something in there a little more powerful and give it an even longer battery life under the same conditions. 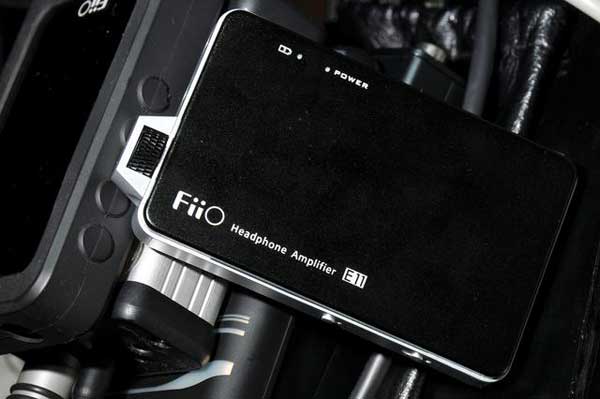 You should note that the e11 cannot be used and charged at the same time which is a bit of a drawback but since it is built primarily for mobility I somehow doubt you will be taking a wall-wart with you on the run.

Lets kick off by saying the obvious – power! This little headphone amp punches way above its weight in the power stakes. OK so using my ESW9 is cheating a bit since they are easy to drive but combining this with the potent HDMS line out setting of the Hisoundaudio Studio-V DAP and the AW Audio Silver Dragon IC, (Thanks to the guys at AW, wonderful IC’s and well worth their price), it just sounded so muscular and aggressive with high gain and a ton of sub-bass on EQ setting 2. I can see many of you might balk at the eq setting number 2 – its very colored and some will say dark but its more neutral with aggressive sub-bass in my opinion that gets further colored the higher the eq number. Move the eq setting down to 1 and 0 and you get a more stable reproduction that I think many will prefer for longer listening periods – its tighter, more accurate and better separation. With the eq at 1 or 2 your moving into the niche territory of uber bass and you are either going to love or hate it. It’s really up to you how you want it and given that I am used to these tweaks now with the Go Vibe and the C&C X02 I kind of feel almost short changed if an amp doesn’t have them. 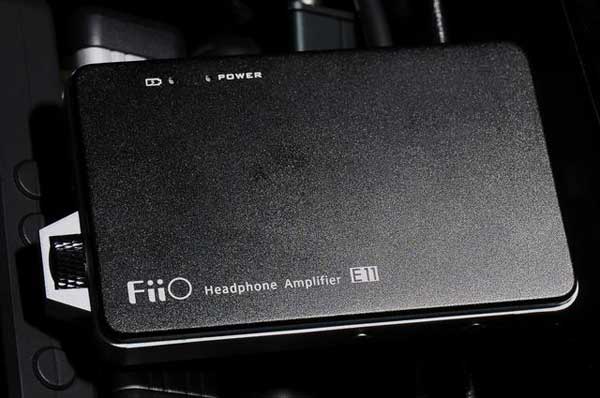 The front of the E11

The stock presentation in eq setting 0 and low gain in my mind is probably the better long term setting. The bass on the e11 and slightly recessed mids can lead some to think it is dark. I would say in comparison to the E7 the sound is definitely darker but far more aggressive than the laid back warm e7 and you need to be careful matching this to a suitable headphone. If your headphone is easy to drive with an abundance of bass such as the ATH-M50 I am not so sure you are going to get any payback. I am tempted to borrow an ath-ad2000 for some reason just to see what it can do since they are easy enough to drive but sometimes lacking in the bass department. I did try it with the Beyer DT1350 and I think overall this was the best match for me giving it a nice darker undertone to the already meaty sq of the DT1350. Somehow I thought the DT1350 really responded well to the power of the E11.

The aggressive nature of the E11 reminds of me of the Grado effect – it does not present a particularly large sound stage and gets smaller with close headphones but as I said the Grado effect – I really wouldn’t care less for a small sound stage because even if it gave me Pink Floyd in a phone box I would say this is a mighty fine amp for the price and should not be ignored on this basis.

Some in our local forum have mentioned the slight presence of hiss when using sensitive IEM’s at higher volumes – I found I could produce marginal hiss when I crank up the gain on easy to drive IEM’s but headphones not so much of an issue unless on high gain. Likely offender here is the high gain setting and is similar to the high gain hiss on the Go Vibe Vulcan+. High power setting with low gain solved it pretty quick for me and given the price ratio to performance of the E11 this is something I would not loose sleep over.

So where do I rate this little $60 wonder? The clue is in that sentence to be honest. Its a fantastic little portable amp. yes the SQ is a tad crude compared to say a PB2 or RSA but given the power at its hands you just can’t knock it. It blows the E7 out of the water for amplification though at times the bass can be overpowering once you start moving up the settings. For something with a Nokia battery inside I have to take my hat off to the guys at FiiO for this.

Credits go to Joma for the slick pics and thanks to the guys at FiiO for sending this out.