Disclaimer: The Erzetich Mania sent to us for the purposes of this review is a sample and does not have to be returned. Thank you to Erzetich for giving us this opportunity.

Erzetich was established in 2012 and are located in Slovenia. The company is the brainchild of Blaž Erzetič (hence Erzetich) who has had a diverse career background in both electronics and fine arts for the last 30 years.

Somewhere in between the bread and butter academics and photography he also managed to establish himself in a band (El Soter). I believe they released 4 albums and also supported Marilyn Manson during the same time for his Slovenian dates which is no mean feat.

The dynamic driver open back Mania, priced at €1199, is the first of two simultaneously launched headphones from Erzetich. The second headphone, the Phobos, is their flagship planar headphone priced at €1999.

This is the company’s first foray into the headphone manufacturing business. Up until this point they have been working on headphone amplification both mid-fi and high-end.

Given their legacy of headphone amps, it is a fair bet they know what they are aiming for with the Mania and Phobos.

Erzetich has previously preached a vision of form and function combined. When they initially launched it was with headphone amplifiers ranging from their entry-level diminutive Bacillus headphone amp to their metal and Linden wood infused TOTL double mono class-A Deimos headphone amp.

For those that are not aware, Linden wood is the national symbol of Slovenia so it is not just some random wood picked off the shelf for Erzetich, it has meaning. For the Mania (and the Phobos) dynamic driver that pitch has continued with hand-crafted Linden wood forming the central talking point in terms of a visual form.

The function is the dynamic driver at the heart of the Mania. Erzetich has described the Mania as delivering a one which is “uniform, detailed and enticingly warm”. They see the Mania signature as a versatile headphone for a wide variety of musical choices.

The driver and cup design are described as semi-open and at the heart of the Mania, Erzetich has placed a reasonably large 50mm Titanium coated dynamic driver with an 80Ω output rating.

This is a similarly sized driver to the one inside perhaps its closest competitor, the Kennerton Vali (Reviewed January 2018). It is also a larger driver size, (10mm bigger), than Sennheiser’s HD700 and also their classic range HD6XX series.

The higher impedance rating and driver size mean the Mania is a headphone that is primarily intended for either a desktop system at home or a smaller but powerful transportable amping system. The Mania is highly unlikely to perform at optimal levels with smartphones or DAPs with low-power amplification stages. 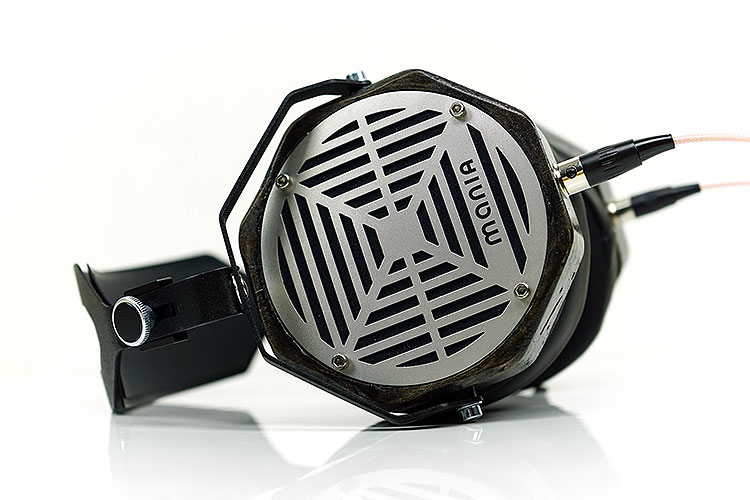 No question the visual aesthetic of the Mania is bold and unique. The Linden wood cups are as genuine a wood finish as I have seen in all my years reviewing. Perhaps only Grado comes as close to showing the “warts and all” of their wooden cup down through the years. Kennerton does an amazing job with their wood choices such as the Vali but its got a refined finish and it is clear the wood has been processed before being shaped.

Not so with the Mania. This is a thick octagonally shaped block of Linden wood for the cups complete with scrapes, pockmarks, grooves and defined grain. The wood has a lacquer finish for a bit of shine and to give the wood a bit of protection against the elements.

The front grill faceplates have a semi spider’s web design and are made of anodized aluminum. The grey industrial hue of these faceplates provides a visually striking contrast to the rather darker almost smoky grain of the Linden wood surrounding it. The grills do not feel flimsy either and look unlikely to dent or warp under pressure. 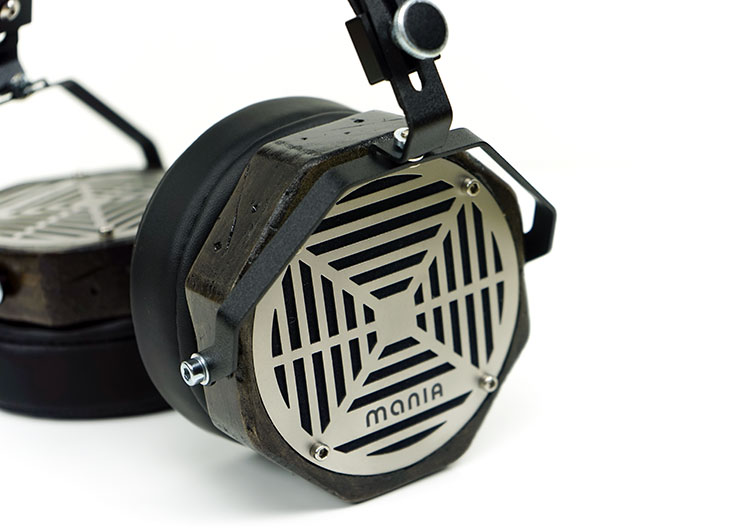 The Mania uses a wide twin pivot screw aluminum gimbal system which provides it with a fairly high level of flexibility for cup adjustment. There is an excellent amount of vertical swivel to allow it turn 180-degrees. In fact, if not for the pads you could turn it 360. There is also a small amount of lateral movement to further assist in shaping the cups around the head.

The Mania also has no trace-wire connections and both cups are electrically independent of each other so there is minimal risk of damage to the cups with this level of rotational capability.

I can only presume this must be an East European thing because the headband adjustment system is the same as the Vali (Russia) and the Verum 1 (Ukraine). The finishing is slightly different but the mechanism is exactly the same with two adjustable screws that allow you to slide the cups up and down a series of notches on the widest part of the gimbal.

As with both the Vali and Verum 1, I tend to find these systems are much easier to adjust accurately off the head rather than on the head. If you completely unscrew them you can detach the headphone into three parts which make it a fairly compact size for transporting.

The rest of the headband is composed of a reasonably lightweight dual-band matte black aluminum arch with a pressure adjusting strap just underneath.  The ‘tiara belt’, as Erzetich call it, is crafted from a rubber-like material which is consistent with their philosophy of not using products made from animal materials. 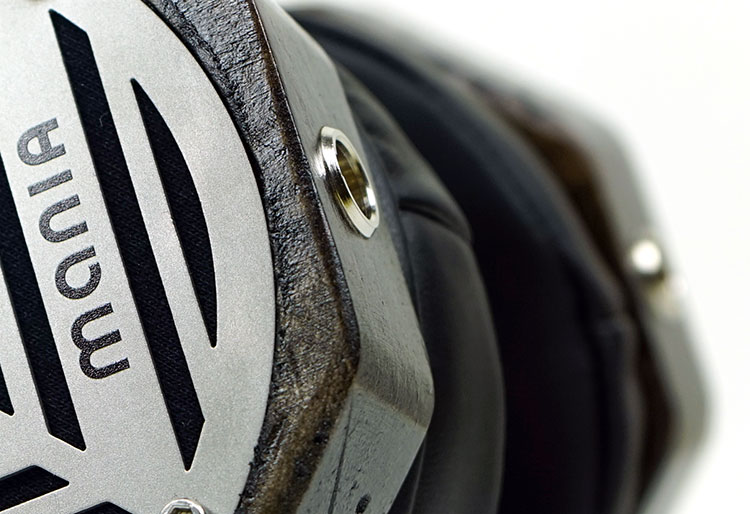 The Mania uses a 4-pin mini-XLR connector system housed into the cups rather than a mini-stem like housing such as you find on Audeze’s LCD range. The positioning is a touch deeper than the Kennerton Vali’s mini-XLR socket system, in fact, it is almost flush with the wood.

The positioning right at the base of the cups means that any cables, stock or otherwise, will be guided straight down. Personally, I would have preferred if the Mania connectors were on the penultimate side to the base so they come out at an angle and away from potentially brushing on shoulders. The Mania is directionally agnostic meaning the cables determine right and left.

The supplied cable is a silver-plated copper clad steel (CCS) (signal) and silver-plated copper (shield). Is housed in a fairly inflexible and noisy nylon jacket up to the y-split. The cable is terminated with a set of mini-XLR female pins and a solid looking silver-barreled and gold-plated quarter jack. The y-split has a nice carbon fiber finished aluminum barrel beyond which the wires are split and finished with what feels like a PET transparent jacket.

I have a few issues with the stock cable. Apart from a large amount of microphonics, particularly below the y-split, the slightly flat nature of the design makes it slightly difficult to manage. It is not memory retentive as such but the wire inside moves slightly independently of the jacket creating a level of resistance to how I want it to be shaped.

Physically it simply comes off as a little too stiff. I would have preferred a soft cloth jacket or rubberized tubing. Those designs have the potential to reduce microphonics and also have a higher level of pliancy. 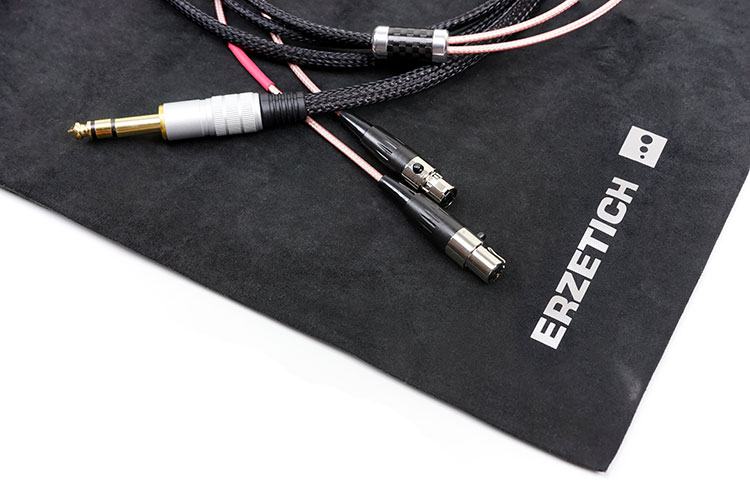 The Mania weighs in at a hefty 460g which puts it in a veritable heavyweight class occupied by the likes of planars. It is almost the same weight as the Kennerton Vali also but actually I find the Mania to be far more comfortable than the Vali.

One of the key reasons is the headband and adjustment system. At its shortest point, the Vali is still too long for my head which was recognized by Kennerton as an issue earlier in the year. The Mania has no such fitting issues and I can find a fairly comfortable adjustment with room to spare. It also looks long enough to fit much bigger heads than mine.

The majority of the weight on the Mania is in the Linden wood finished cups and metal gimbals. Erzetich has created a headband structure that applies more sideways clamping pressure than downward pressure. This pressure strap also eases the remaining downward pressure and does a nice job of balancing the fit in general. 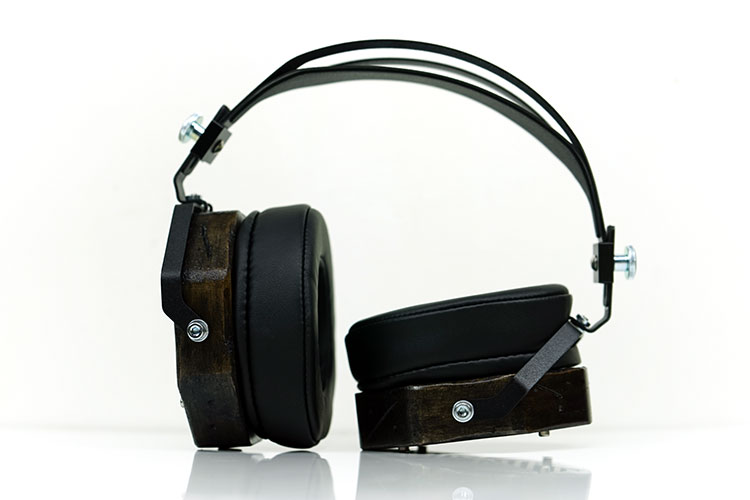 The clamping pressure is the only real area that I can see people get uneasy about with the Mania. However, the leatherette pads used are fairly large and quite deep and do a good job of taking the edge off the sideways pressure.

This is not a partial circumaural headphone which relies a little on the pads resting on both ear and neck to create a seal. These pads completely clear my ears with the inner rim sitting comfortably on the side of my neck. This helps a lot with comfort levels, making it far less fatiguing if it had of sat on the ear.

Of course, this is partially anecdotal since everyone has different heads. However, despite the excessive weight and clamping pressure, the level of physical fatigue was far less than I expected with the Mania. 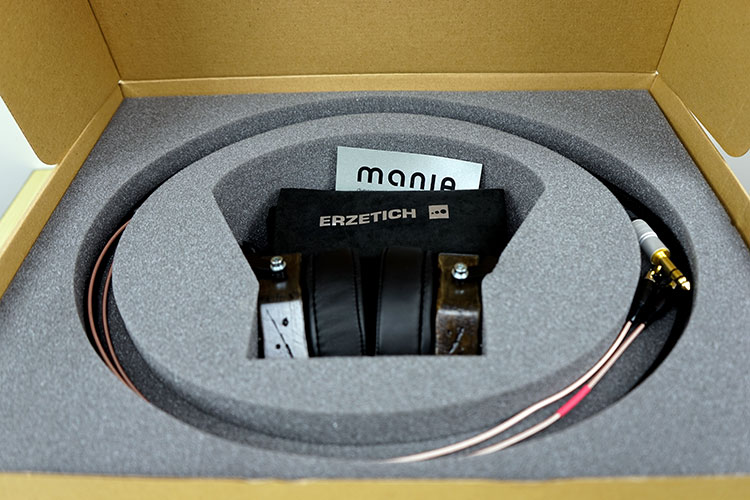 The packaging is actually quite large though not quite as lavish in materials. Nevertheless, it is fairly well laid out with a contoured foam lining housing the cable which is coiled around the middle foam cut out for the headphones. You also get a little marketing call card of sorts inside the box and a soft black carry pouch.

From the looks of things, the majority of the space is eaten up by the cable arrangement. I would have opted for a deeper but volumetrically smaller box from a business point of view. Impressively big as it is, the costs of shipping this box must be huge for a boutique business.

Personally, I would dump the carry pouch and large case and go for a smaller display box made of compressed cardboard or an LCD type travel case. Both may be more expensive but would be volumetrically smaller and provide a better level of everyday protection.