The Dan Clark Audio AEON 2 Closed is a new foldable upgraded design on the original AEON closed-back planar magnetic headphones. It is priced at $899.

Disclaimer: The Dan Clark Audio AEON 2 Closed sent to us is a sample in exchange for our honest opinion. We thank the team at Dan Clark Audio for giving us this opportunity.

Dan Clark Audio AEON 2 Closed
The AEON 2 Closed fits in with that same philosophy, which is to keep it natural, planted, and relatively easy to listen to without a loss in detail or dynamic range. Mods are just the icing on the cake in terms of useful tweaks.
Slide here to add your score on the gear!81 Votes
8
8
Score
$899
Dan Clark Audio

We had planned to release this review a little earlier to time with CanJam in Singapore but with the COVID-19 situation, those dates got moved to August of this year. As it stands, we did get to spend more time with Dan Clark’s latest creation, the AEON 2 and that does include the additional filters.

One other cool thing was the new AEON 2 Open version that arrived a few weeks ago. That will give us an early chance to compare them as well as speak about the improvements over the original AEON.

Eagled-eyes fans will have noted that Dan Clark Audio has launched a new ‘RT’ version of the old AEON with some added bass tweaks. Mike just received that recently and will have a review on that in due course. Our comparison and sound summary work on page 2 are based on the original AEON we reviewed a few years back and not the RT.

So, what is new? A lot of things actually apart from the new company name. The first thing that leaps out is the articulated design that now allows the AEON 2 to fold into a veritable ball of cuteness compared to the static original.

Going along with that is a smaller sized carry case which I just love. The AEON 2 is now a genuinely portable planar headphone.

The second it the new driver structure. If I am not mistaken much of what goes into the AEON 2 is drawn from the process of building the Ether 2 which we reviewed earlier in the year. The driver structure is now flipped 180 degrees with the magnet and FLOW structures now out of the direct signal path of the ear.

The FLOW elements and drivers are now much more integrated and simplified as a result of a single construction rather than the older pieced together design. Gone is the older injection molding and in comes a machined FLOW structure that is more precise than before. This allows Dan Clark Audio to remove all the tiny air gaps that may have formed on the original design.

The final element is a new damping driver design using new materials that are purported to improve resolution and subsequently enhance the frequency response of the AEON 2. 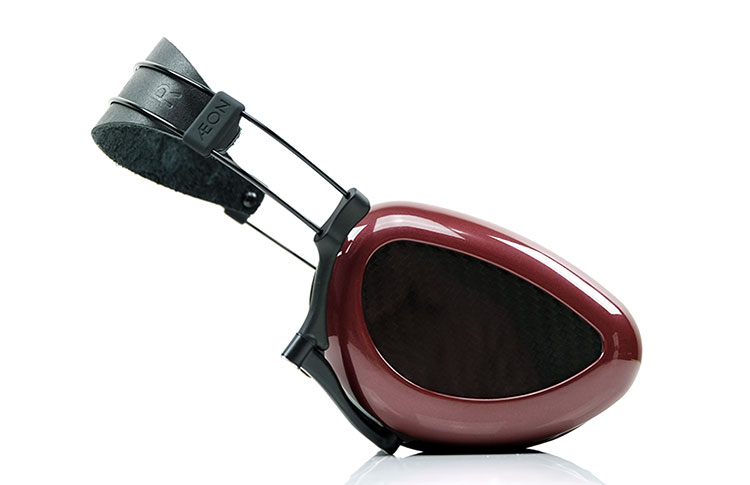 At full stretch, the AEON 2 looks almost the exact same as the original AEON save for 3 differences, one aesthetic and 2 structural. The aesthetic tweak surprised me and that is changing the color from that dark blueish tint to red.

Red I normally associated with Dan’s open back designs such as how the Ether started out. Then I remembered the Alpha Dog and Prime were quite red also and closed, so perhaps this is a return to the original roots of what red meant to the company? Especially since the new Ether 2 open is now black instead of red this might make more sense.

If it helps produce a comforting assurance, the open back version of the new AEON 2 is also red with the only difference being the open honeycomb grill cup plate design, much like the older blue AEON open.

All other areas are largely unchanged with the very lightweight NiTinol headband design, leather headband strap, and elongated or vertically tall ear cups with matching pleather pads. You may have noticed I did not mention the gimbal design and that is because this is where the second major tweak has been brought into the new AEON 2. 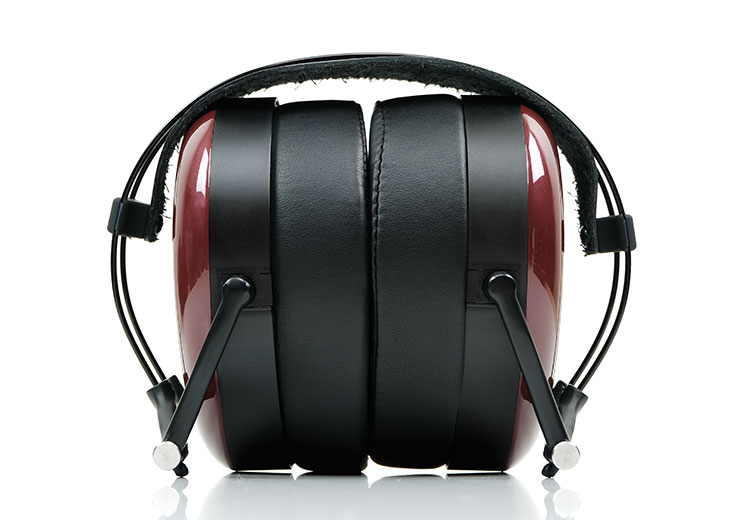 The change is a little more complex than the new splash of red color but is perhaps this is the most important design tweak. This is now an articulated joint in the gimbal of the AEON 2 and the basis of the new folding mechanism.

It allows you to push from the top down to basically cut the size of the AEON 2 in half in one clean motion. Dan Clark Audio has also retained the existing high level of cup swivel from the original AEON, so the new AEON 2 is a now very flexible portable headphone.

The final tweak is the relocation of the small vent that was originally at the base of the AEON cups near the connectors to halfway up the rear of the cup sidewall.

It also looks like it has a small filter applied that is different from the one on the original AEON. It sort of reminds me of the venting mod that was done on the Ether C Flow V1.1 except internalized as there does seem to be a mesh element behind it. 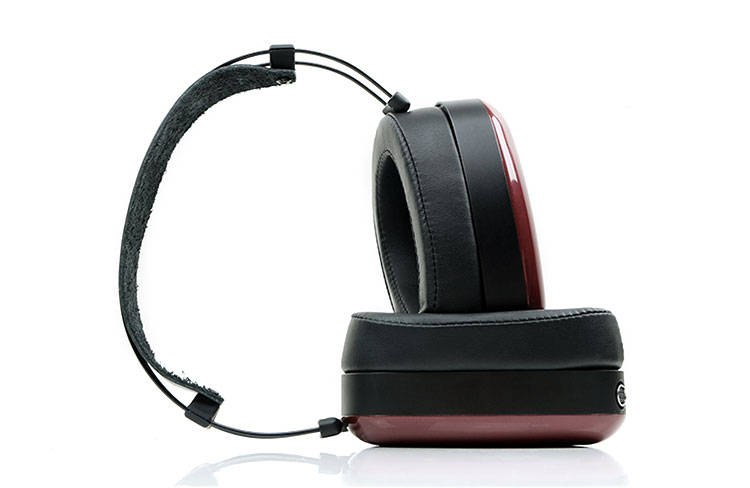 The new AEON 2 does feel ever so slightly different on my head to the older one. There seems to be a bit of a minor weight difference that I can feel when holding both in my hands at the same time. This may well be the new gimbal folding structure. It is not that much, to be honest.

The second is clamping. The new AEON 2 feels more secure than the original one. The AEON is slightly looser on the sides whereas the new one has some stronger lateral pressure. This also may well be a direct effect of what seems to be deeper and thicker pads used on the AEON 2 compared to the original.

They are very comfy indeed. The new AEON 2 does seem to have an edge over the older one for comfort and secure fitting on initial impressions.

This is a little added extra that has yet to happen to the pads on the review sample AEON 2 but has happened on the original AEON. Those pads can bulge out or slightly flatten as a result of repeated use. These bulges can look a little unsightly but do not affect performance as far as I can tell.

Thankfully, they are pretty easy to fix, so if you find the AEON 2 pads doing that, then just follow the instructions in the video above and it will be sorted in 1-2 minutes max.

The cables vary in length and thickness and you can choose which one you want at the checkout. We have two samples here in balanced and 3.5mm single-ended with a quarter jack converter. The balanced is their new VIVO cable that came out with the VOCE and Ether 2. The unbalanced is their older DUMMER cable and a slightly shorter length than the VIVO.

The older DUMMER is an OFHC cable whereas the new VIVO cable is a silver-plated OFHC copper wire. It seems to be a slightly bigger gauge wire than the DUMMER given the dimensions. Certainly, it is a little bulkier than the DUMMER but it also seems much more pliant, so the insulation could well be improved rather than just the wire.

The weaved cloth jacket remains the same on both however the Y-split divider is an aluminum alloy barrel compared to contoured rubber on the DUMMER. The connection we requested is a 4-pin XLR but you can get it in 6.35mm, 3.5mm, 2.5mm, and 4.4mm, so plenty of options to choose from. You can also order the VIVO in 1.8m and 3m cable lengths depending on your needs.

The microphonics on the VIVO cable is much lower and with far fewer kinks and twists in its physical handling. The performance was also a significant upgrade. Far snappier, better dynamic range, and more resolving than the DUMMER cable paired with the AEON 2.

MrSpeakers have stuck with those handy Hirose connectors that have been a feature of just about every headphone they have made going back to the Alpha Dogs. You actually buy replacement ones direct from DCA on their website at $6.99 which is actually cheap compared to the likes of eBay.

Continuity is an assurance for me that things are working. Especially if you have a bucketload of aftermarket hirose terminated cables lying around. They are easy to insert and lock and honestly, I have had no issues with these connectors on their headphones. 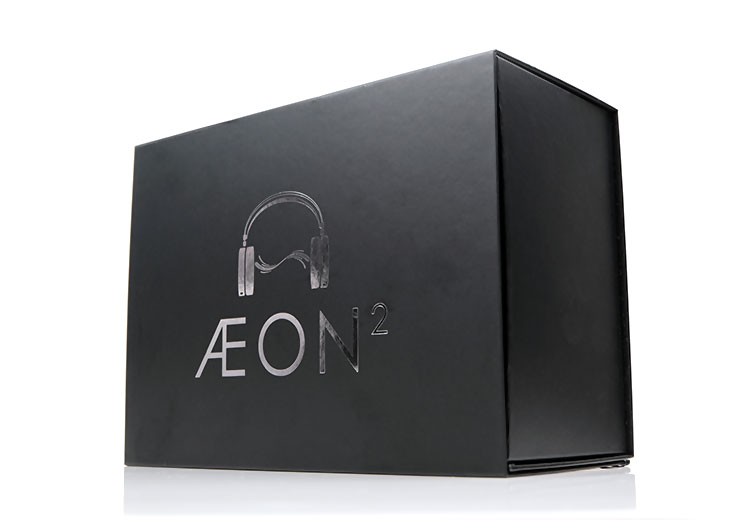 By luck, I had some things I needed to source from DCA, so they managed to send the final retail packaging before this final review and that means we can talk about it a bit more.

The visual aesthetic of the box really has not changed that much from the original AEON save the insertion of small 2 beside the name and the dropping of the Flow strapline from the front.

It is a shade smaller, however, simply because it ships folded inside its smaller hard case. with the cable neatly tucked away in a thin cardboard container to the bottom of the box. The headphones still come packed with a protective foam wedge between the cups to prevent courier damage. 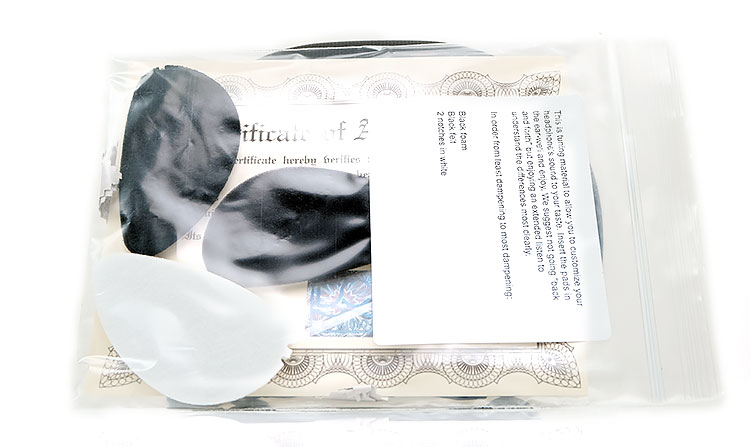 Accessories include a rather excellent small form hexagonal printed black zipper carry case, a choice of cables in balanced or unbalanced format and the obligatory tuning pads.

No Dan Clark creation is ever complete without a set of those tuning pads. A quick check and yes, they are more or less the same type of pads that were formulated for the original AEON FLOW. That means a white pad, a black pad, and a foam-type pad, all in pairs.

The white pads are softest of the three pads supplied. The black pads are made of a slightly coarser and stiffer acoustic material and slightly thinner than the white pads. The final set of pads are a thicker foam-like material.

The original AEON closed-back only had one tuning pad when launched, so it will be interesting to see how the 3 types of pad change the tuning this time around. 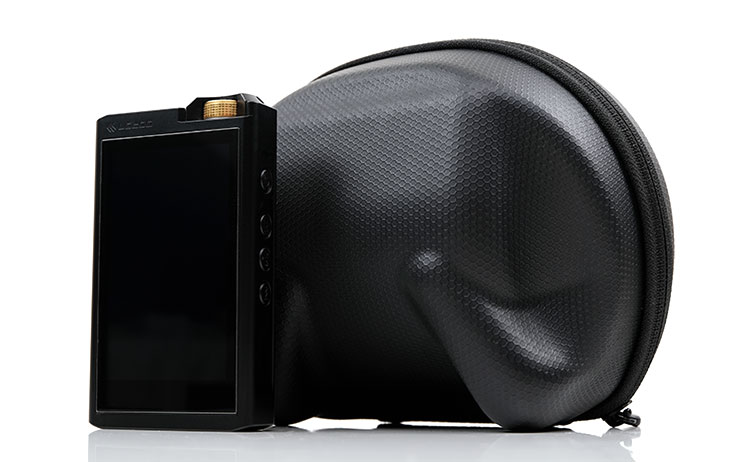 The new carry case is small, cool, and very handy. The picture above with the Lotoo DAP gives you some idea of how much size reduction Dan Clark Audio has been able to achieve with the new folding structure. 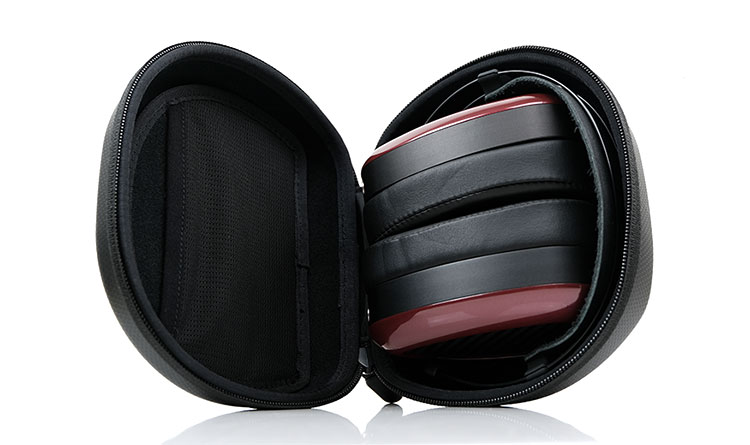 The size reduction does not seem to come at a cost of construction either. Its hills and valleys inside and outside perfectly form around the folded AEON 2 with just enough space for a cable in a mesh canopy above and the flat mod pads below.

It also feels strong enough to take a knock or two in everyday use so it is good enough to throw into a bag complete with AEON 2 inside.