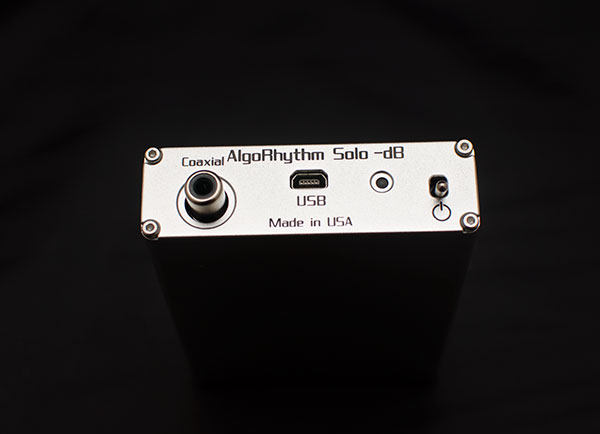 The igadget up until recently was seen as a useful tool but by no means a love affair between the picky audio consumer and the Jobsian vision of what a DAP should accomplish. The original CLAS SOLO was basically a breakthrough in terms of connecting the audiophile to an igadget in a meaningful manner in 2011 giving vastly superior DAC capabilities and a bypass of the so-so internal DAC capabilities in the igadget for the first time and all in full compliance with Apple’s exacting license standards.

The era of the triple stack was upon us with all manner of amps coming into play under the little SOLO silver box and the igadget firmly entrenched on top. Just about every local meeting I have been to in the last year has the now instantly recognizable sighting of a triple SOLO CLAS stack. It is a pity the 5.5G is out in terms of compatibility but that is an issue been put to bed a long time ago with the first release so with that in mind MP3, ALAC etc is the go to format and not FLAC for these devices as of now due to Apple license restrictions no doubt.

But times move fast and Sony and Fostex have jumped on the bandwagon with more evolved igadget interface audio products such as the HP-P1 and the PHA-1 so Cypher Labs have returned with a new updated version of the SOLO, The SOLO -db, which ups the ante and for me clearly establishes it’s audiophile credentials beyond simply a consumer friendly amp for the igadget fanatics with picky ears.

So what is difference from the original SOLO and the new SOLO -db?

Well from the casual observer from a distance there is not much physically different. The classic silver box design and logo and decals are all similar apart from the -db moniker. It is only when you look at the front and back panels do you see the major differences or upgrades. 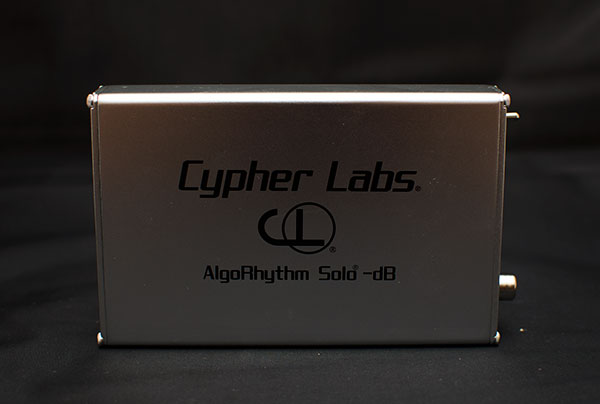 The first major one is the ability for the SOLO -db to output in balanced mode with a 4-pin balanced output connector at the back along side a standard 3.5mm single-ended input mode such as the one found on the original SOLO. Paired with the ALO Audio RX3 balanced amp this is a perfect form factor and functionality fit and true enough Cypher Labs had this in mind when designing the SOLO -db. Right now the SOLO -DB is the only device of it’s type that sports the balanced output and combined with the RX MK3 you actually have a seriously powerful portable stack that can easily drive the LCD-2 and make a good go of the HE6 in terms of power and audio quality.

The second big change is actually on the inside with a change in DAC chip from a Wolfson to a 24 bit AKM4396 which delivers a slightly broader spectrum and smoother sound than the previously slightly bright original SOLO. Thankfully the new SOLO -DB is compatible with the lightening connectors on the latest iPods and can deliver 24/192 sampling which is about as good as it gets for everyday playback. The coaxial output and the usb input that runs either your idevice or direct from your PC allows the SOLO to also become a little something more than a glorified portable DAC – it allows system building around the SOLO. Combined with that 24 bit 24/192 DAC inside and the balanced or single ended output you can really see how a desktop build is now very possible with the SOLO -db. 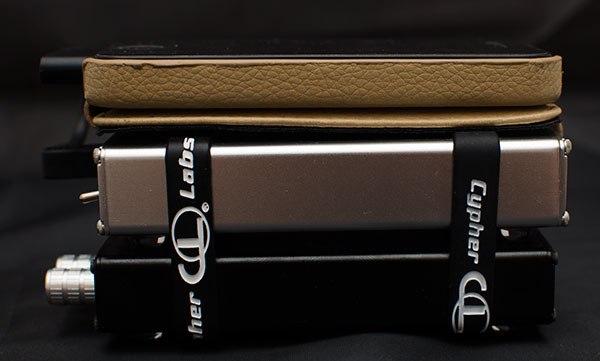 On top of that the new SOLO can charge your idevice simultaneously during playback or when switched on and gives a rated 14 hours playback time which considering what it is designed to do is pretty good for a portable device.

I really enjoyed the original SOLO but these new features make the SOLO -db a very relevant audio DAC indeed and has a lot more potential than I gave it previously outside of an iPod bolt-on for audiophiles.

The new SOLO -db DAC has some definite advantages in the older original SOLO with a much more natural and liquid sound than the older brighter and perhaps harsher SOLO. The edge on the treble has been taken off slightly and the mids and bass seem tighter, more impactful and produces a much better texture than the original. The new SOLO -db just seems much more coherent and matured than the original ‘sparky’ edition and combined with the 24/192 DAC just sounds a lot more convincing to me from bottom to top in terms of detail and articulation. 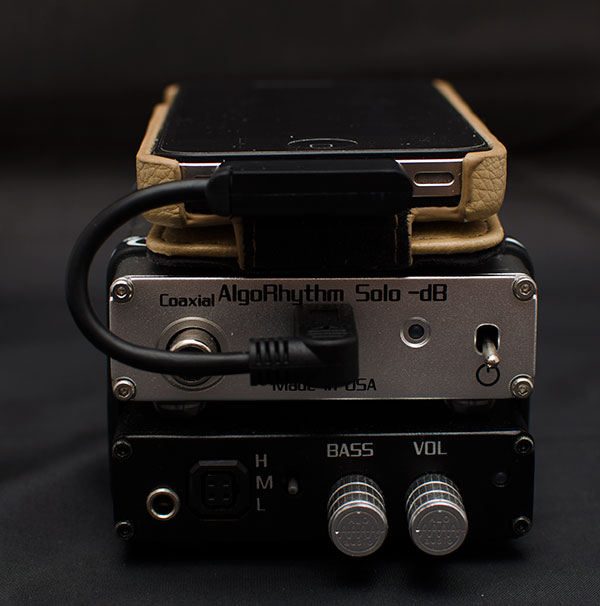 Previously I had reviewed the SOLO with the RX MK2 and found it to be a fantastic upgrade in terms of iPod to amp to ear but over time the combo felt a bit bright or hot through still very exciting and dynamic. Fatigue was somewhat higher for me on that combo than when I tested and compared the Fostex HP-P1 recently. Although the Fostex’s built-in amp was for me a weak link I found it’s more laid back tonality and lower power rating to be a bit more suited to IEM’s and long listening periods where absolute clarity was not a must. The Fostex is still the smoothest of the two but the SOLO’s superior ‘weight’ and articulation now makes it the more exciting of the two choices. Combined with the option of adding any headphone amp of your choice and balanced at that makes the SOLO a far more involving experience for me personally.

Of course mixing and matching with amps is a matter of taste and matching. Being a 4-pin balanced unit now it just screams to date and marry the ALO Audio RX MK3 amp and I suspect most will grab the -db just to get a completely portable and fully balanced system. The Solo and RX MK3 have essentially the same form factor and to be honest one is built for the other and I don’t think Cypher Labs would really shy away from that statement as the default choice for balancing the -db with a good amp. 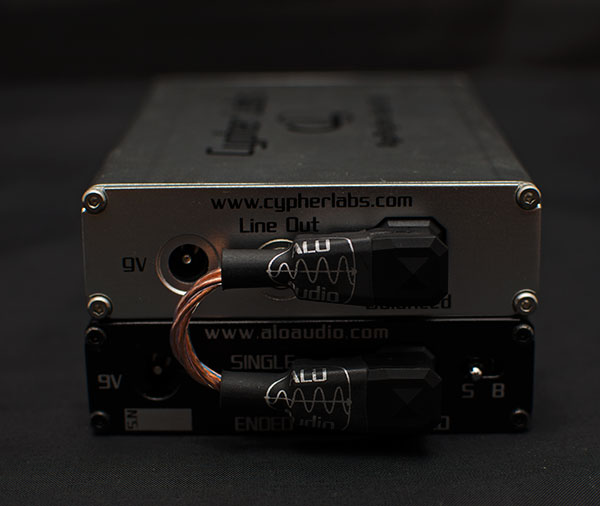 Now with regards to going single or balanced being better or worse lets side step that slightly for now as technically the audio quality is not what is at stake here but the ability to drive headphones in balanced mode that may not be possible in single ended mode. I don’t honestly believe the tonality of the DAC chip differs significantly between balanced and single ended but what you do get it a more even playing field in terms of what headphones you can try and drive satisfactorily with a good balanced setup. The actual balanced input stage will likely be superior to the single stage plus there will be an overall lower overall noise level in output. Given that some tastier headphones will have pretty long cables be them stock or modded the noise reduction levels is a big benefit when going in balanced mode. That is pretty much what you get with the -db and MK3 – a powerful balanced system with great nosie reduction, steady signal and the ability to drive fantastic headphones such as the LCD-2 and the HE6 better than most combinations out there right now in the portable market.

But what I found to hit the sweet spot in terms of pure tonality and driving power was the -db and the International which is a balanced DAC/AMP also from ALO Audio that just had a far more soothing top end than the RX3 and a really liquid mids section that belies it’s solid state nature. The match here was devilishly addicting to say the least and whilst the RX3 is slightly more exciting and dynamic I found myself gravitating to the International a bit more. The form factor match between the International and the -db is a bit off due to different DAP design considerations and I will explain more in my review of the International shortly.

The -db is a step up from the original SOLO in many ways. Balanced output, a superior DAC chip, higher sampling rates, ability to charge your idevice on the go and plug it directly into your desktop system makes it a really relevant device for those on the Apple ecosystem and frankly most of us are in some form or another. True the competition is really hot now with increasingly powerful DAP’s such as Ibasso’s DX100 and the AK100 from iRiver as well as existing direct competition from Fostex and Sony for portability but Cypher Labs did it first and with the -db they are ahead again. If something comes out that does the same for Android USB on the go audio like a firmware update then you have the go to audiophile portable DAC for 2013.