The Chord Poly is a wireless-capable ROON ready streaming add-on module for the company’s compact portable DAC/Amp, the Mojo. It is priced at £499.00.

You can read more about Chord Electronics products we reviewed on Headfonics by clicking here.

Chord Electronics Poly
If you are going for a Chord Mojo and you want a truly wireless experience from it not to mention the best possible performance then the Poly is really the best deal in town.
Slide here to add your score on the gear!48 Votes
8.6
8.6
Score
£499
Chord Electronics

Perhaps the Poly review should have been done a lot earlier, perhaps this is perfect timing with the recent but massively appreciated Firmware v2.0 update. The Poly was actually formally launched in late 2017, that is almost 2 years ago (EXIF photo data says so!). It was and still is, billed as the perfect wireless streaming companion to the almost ubiquitous Mojo.

Perhaps one of Chord most obtainable products and our portable amp/DAC winner in 2016, the Mojo is still one heck of a portable device with excellent sound quality and a decoding capability that is still top-drawer. With the exception of MQA, which Rob Watt’s honestly has no time for, the Mojo is 768kHz/32-bit capable making it very relevant in 2019.

Just one thing missing though, something that in 2019 is maturing at a rapid rate with more and more products coming out with one eye on how to tap into that feature.

In short, the ability to stream either from your own network, your phone or the internet at large. The Poly is designed to answer that question and bring the Mojo along with it for the ride for a not inconsiderable sum of £499. 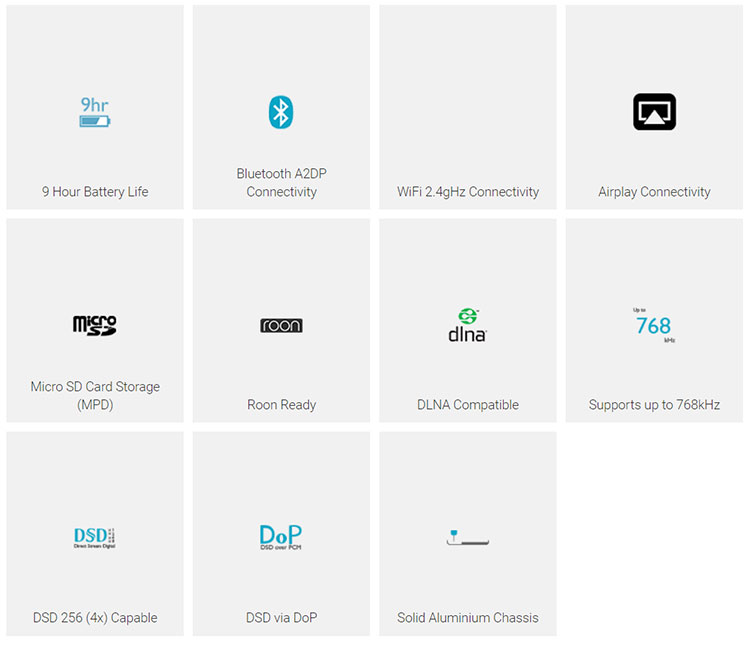 The Poly’s tech is defined almost as much by how well Chord has partnered with streaming services as it is by what is already stuffed inside it. There have been no upgrades physically. It is the same device, warts and all, since its launch. However, subsequent developments in the firmware plus new partnerships have really added some quality value to what it can do.

I guess you can define the two key wireless protocols into a major and minor feature set. The minor is the Bluetooth connectivity in terms of what it can do. This is BT4.1 technology and only offers A2DP and SBC level decoding.

You will not find LDAC or even aptX capability here but then it is not the point of the service. The launch of the Gofigure App and the need to use a smartphone for a lot of the Poly functionality requires a stable connection.

The BT tech inside of the Poly offers that and in doing so does away with the ‘dreaded pin’ process. When the Poly was launched you needed to use an Apply-type sim tray pin to get everything hooked up. Not anymore. Bluetooth functionality combined with the Gofigure app does away with the pin making the pairing and network mating process so much easier.

WiFi is the fourte of the Poly. It is missing 5gHz which would have been nice to see but offers a solid 2.4gHZ connectivity to allow you to stream wireless audio directly to the Mojo. It has the capacity to receive tracks up to DSD256 and 768kHz PCM wirelessly which is in line with the Mojo’s feature set.

Now here is where the service partnership comes into play because the feature set here is excellent. You have Airplay for iOS products, DLNA for Android and Windows and recently a ROON Ready certification. We have been testing ROON for a while now and the Poly integration is excellent.

You will also be able to work your own private network streaming service with the DLNA feature in partnership with a plethora of UPnP apps available on Google Play such as BubbleUPnP.

Everything about the Poly is designed to work seamlessly with the Mojo. That includes the form factor, materials finishing, and the way it connects to the Mojo.

On its own, the Poly is a stubby little robustly built matte-black device, much like the Mojo. It’s styling with the italicized Poly moniker on the front is very much in keeping with the Mojo finishing. The Poly dimensions and weight are consistent with the Mojo also, primarily for it to easily connect and function as an extension of the Mojo rather than as a separate device.

The only real break from the Mojo build is the plastic bottom corner which is designed to maximize the strength of the Poly’s wireless signal. Forcing a signal through a tough aluminum chassis is much harder and will result in diminished performance.

Connecting the Poly to the Mojo is a piece of cake. The front of the Poly has 4 ‘connection points’ two of which act more as a protection for existing Mojo sockets with additional stability.

To connect them both, you simply align and slide in. There is nothing more to it with no locking screws or anything fiddly. To further secure the Poly, Chord has provided a single protective case for both which does a nice job of ensuring both remain tightly locked during use without blocking any functionality sockets or Mojo orbs.

Since both the Mojo and Poly have no LCD screen, Chord instead uses a small array of LED diodes at the base of the Poly to indicate a fairly wide range of status updates. I do recommend referring to the supplied manual in the box to understand what they mean.

Just to the left of the micro-USB socket, you have two core diode indicators; P Status and M status. P stands for Poly and M stands for Mojo and together they give you a rough indication of battery life for both as well as wireless connection status for the Poly, (P status).

The LED diodes will also alternate between flashing blue and green to represent the Hotspot mode being active. Flashing blue only shows Poly is looking for a known WiFi network and flashing purple shows an active Bluetooth connection.

This used to be the first hole you stick that pin into to get the Poly to work or pair with a network. It should still work but it will be a cold day in hell before I revert back to using the pin for setting up the Poly again.

It is an awkward little pin that enables some level of profanity from the user during attempted operation. The Gofigure app does away with the pin so just keep it in the retail box and be happy you do not need it again.

Thankfully battery life on both is almost matching at 9 hours for the Poly and around 9-10 hours for the Mojo. There would be nothing worse than vastly different life cycles for two devices that are supposed to work together in harmony.

Checking the battery life on both via the diodes is relatively simple with blue for a 75-100% charge, green for a 50-75%, and various degrees of orange down to red for the last 5% available. The Poly will cut out any audio and network connectivity once you are in the red flashing zone.

Charging time is not super-fast but then again, you are charging two devices when the Poly is connected. With a 2A connection, you should be able to get a full charge within 4 hours, and if you are using both whilst charging at the same time that slows down to about 8 hours.

With a 1A charger, only the Mojo will get charged so you do need to be careful you connect both to a proper power outlet.

The Gofigure app is absolutely essential to get the best out of the Poly. From setup, naming, device connection, and help feature the Gofigure app plays a central role. You can use it on both iOS and Android devices and it will smooth out a lot of the integration with 3rd party services such as ROON.

When it first came out in beta mode in 2018, I had sneak-peek of that version. Back then it was a lot more limited so I am very impressed by how much development has gone into the firmware upgrades of the Poly and the feature set to go along with those upgrades in Gofigure.

Gofigure uses the Poly’s BT protocol to connect to smartphones which, in turn, renders that pin connection moot. Once connected it will look for a Poly device’s BT signal which is always on when fired up and unpaired.

Once it spies your Poly you can begin by giving it a useful name and then pairing it to the network of choice. Simply tap in your network’s password name, wait for a second or two and then the app will confirm a successful connection. You can opt to register your device and also enable ROON Ready before you hit the finish button and go to the main ‘home screen’ of the app.

This is a fairly useful starting point with quick updates on the battery status and menu options to get into settings, user profiles, and the help menu. Still, I can’t help but feel there is some more work to be done here.

For example, we can see what the Wireless network connection is but the Gofigure BT icon is passive and has no features. Since I am also connected to a BT smartphone I would love to be able to switch to the BT pairing status and make sure I am still connected to my original source.

Some other quickfire examples include the lack of privacy for passwords (no asterisk cover for TIDAL or Qobuz), the use of the word General settings when in reality it is just product and WiFi address info could be minor tweaks that might improve the user experience.

I would also love for the app to be able to have a media library manager built-in that can read the memory card tracks. Even if not for playback since it has no local audio rendering it would be nice to make sure the card is working properly.

Having said that, the settings menu is fairly comprehensive and easy to understand. There are controls for the Poly’s hotspot mode and the ability to manually add networks in case yours is hidden. You can also reset the Bluetooth connection as well as quickly turning on and off ROON and DLNA services.

One thing to note, you cannot work the ROON Ready status and “other Music Services” at the same time. It is one or the other.

The ‘older user’ will be smiling when they see the home screen and a “Launch Radio” feature. Yes indeed, the Poly can launch traditional FM Radio over a wireless connection if the service has an equivalent URL.

I am old school and I just love accessing my old favorite stations via the Gofigure app. Particularly now I no longer live in my original country the service is a beautiful way of staying connected with some initial stations such as BBC Radio 1 to 5 which are pre-configured.

You can add more if you wish if you know the URL and name so it is not limited to UK stations. How good the service depends a lot on your own wireless connection speed but with a 25MB Fiber optic connection here it was quick and pretty good quality.