Having been listening to the HD-160 amp for a while now and enjoying its impactful SQ, our sponsor and SE Distributor of Burson Audio, D&A International suggested I give the HA-160DS a try out also and of course I did not hesitate to say yes. The HA-160DS is the baby brother of the original HA-160D and comes in a good bit cheaper at around $800-900 US but by no means consider it a ‘lesser’ in terms of sound quality.

To get the attractive price point Burson Audio had to do a bit of tweaking with the original HA-160D. In the HA-160D you got a real box of tricks with a USB DAC, preamp capabilities, high AND low gain headphone outputs – especially useful when trying to use a high and low impedance headphone at the same time 24 stepped volume control. Essentially the D was designed to be a key part in a high end system and being priced over $1200 it was certainly not to be taken lightly. The D, as reviewed back in November 2011 by Kyle, was really something special. We had the chance to take the D out with us to KenJam2 in December 2011 and it was very well received indeed. The HA-160D was generally viewed as an excellent, aggressive DAC/AMP combo with plenty of impact. A discreet amp and DAC such as this is a real keeper in my book.

So why produce a ‘budget’ version of the D in the shape of the DS? Well from what I can gather this was a result of a ton of feedback from customers – headphone customers! Yup that’s us guys in case you are wondering. What Burson decided to do was shoot for compromise price and took out the pre-amp, high and low resistance headphone jacks, (now one jack with impedance ‘somewhere in between’ both high and low), and most of the system orientated outputs from the back of the DS. They also made a very big move in taking out the Burson stepped attenuator and replacing it with an ALPS Blue Velvet potentiometer or ‘volume control’ to the layman. The stepped attenuator is a heap more expensive than the ALPS Blue pot so plenty of saving to be had there. The ALPS to most will also feel more accurate than the stepped version as it has a smooth turn rather than the more snappy step by step feel that many headphone users might dislike given it is slightly less accurate in many respects to fine volume tuning. Both methods give their own unique spin on the end product – the sound itself, so you might want to audition both given the fact many who first demoed the HA-160D noted it for it’s ‘impact’. 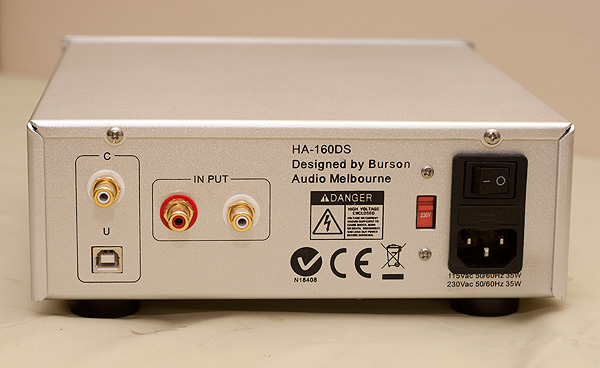 The second key difference to note comparing the HA-160D to the DS is the fact this is basically an enclosed headphone system rather than a link in the chain like the HD-160D was. On the back you have USB input, digital and analog inputs only. No outputs. The only output is the headphone jack itself at the front. So you can hook this right up to your source and go straight to the headphones as an all-in-one solution. Some may like that for simplicity sake and some who have existing high end amps for specific reasons may not (ortho people in particular with the HE6). I can see both sides of the coin on this one and in some respects I would prefer at least one set of analog outs for choice but considering the amp itself is essentially the same amp as the celebrated HA-160 (on paper) then most people wont suffer any loss. Certainly if you want just one high end solution the Burson Audio HA-160DS is a very high contender indeed in that respect.

There are also some slight cosmetic difference in the build quality. The initial HA-160D was a schooling on amp casing with beautiful thick plates and almost total heat isolation, the same also with the standalone HA-160 amp. Now to get that competitive pricing the DS has gone with thinner build on the enclosure. From the outside it looks just as great as the old design but its slightly less efficient at blocking out the latent heat and does feel thinner. On the plus side the big nuts and bolts on the HA-160 has is no longer present so the top is a bit smoother and less industrial looking. It is not a biggie though, just a minor note.

So on a technical level I think Burson did a fantastic job here answering the call of headphone users. For those with high end demands and choice issues I would say stick with the 160D but for those with a lust for simple headphone orientated setup solutions and still want a high end product, on paper, the 160DS fits the mark. 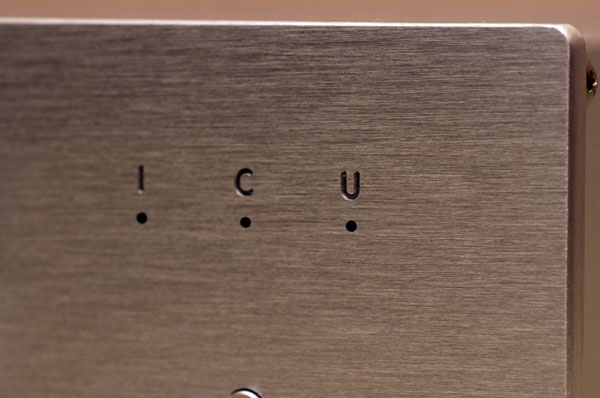 All that and I have not even talked about its performance. Goodness where are my manners! OK so I did note before that comparing the D and the DS and even the regular 160 amp side by side there are some differences in sound presentation and ultimately you might want to choose your camp because this is not a case of better or worse quality but just slightly different emphasis.

Straight off the ALPS pot made life a lot easier on the volume control but I did find coming from the twin jack outputs of the HA-160 and the DS to the single jack a bit challenging in terms of what headphone would match and what would not. I opted for the Senn HD800 initially and got to about 10am on the dial for safe listening on FLAC so for sure 300ohms is well within its capability and I would dare say it will easily cope with 600ohm also. The sound itself was very smooth with a very balanced and neutral presentation the scales very nicely indeed with the HD800 without every getting out of control.

It is a not a laid back amp in it’s own right but here is my sticking point, it is not as impactful as the HA-160 or the DS. There are no issues at all with bass presentation. It extends wonderfully and gets you to where you want to go but the ‘hit’ was slightly more polite than the bigger D and the 160 amp. Plenty of pace and and it is still a punchy presentation but for me personally I still veered to the D and 160 amp sound. It is really just a question of taste to be honest. What camp are you in? The holistic balanced and smooth presentation of the DS or the punchy more aggressive D/HA-160.

Putting aside the comparison I really enjoyed the DS – bass extension was fabulous, the sound is very smooth and warm and the articulation is a notch or two higher than many amps in the sub $1k range. There is a slight degree of roll off at the very top end but this only serves to give a much more non -fatiguing and pleasurable listening experience. Comparing it to the Lyr was really a schooling in everything but power. The Lyr maybe one of the last words in pure grunt with 6 watts per channel but for sheer aggression and forwardness without any shrillness the Burson HA-160DS was king. The Lyr actually sounded a little polite and cold in some ways compared to the 160DS – made me think which one was the actual tube amp! Of course the Lyr comes into it’s own when using the HE6 and in my mind the HE6 did not work as well with the DS so hats off to Schiit for putting out something there that they knew would stand the test for headphone amp power demands. Don’t even get me started on the match with the ATH W3000ANV – this was just pure perfection to my ears.

So where do I stand on the DS? If you want a link in the system – this is not it. If you want this as your system and your a headphone nut then this is it. If your looking for warm amp, natural tonality with great attack and articulation combined with solid aggression and a non-fatiguing presentation then the HA-160DS is going to serve it to you in buckets. If you want a bit more impact I would say save a few hundred bucks more and grab the HA-160D or the HA-160 amp and plug it into your existing system. Both will serve you well.

You can contact Burson Audio in SE Asia through D&A International Singapore at: