The Abyss Headphones Diana V2 is a second-generation Diana-type, (non-Phi), open-back high-end planar magnetic headphone. It is priced at $2995.

Abyss Headphones Diana V2
The lower price will also tempt those thinking about the competition, the Empyreans, and RAD-0 or the Final D8000's of this world which have a similar price. It belongs there but it also brings its unique qualities to the table. Qualities such as a blazing level of articulation, outstanding staging complexity, and very smooth yet clear tuning. A very addictive performer indeed.
Slide here to add your score on the gear!194 Votes
8.8
8.8
Reader's Score
$2995
Abyss Headphones

The planar Diana Phi from 2019 was somewhat of a revelation to me and I have been reviewing quality headphones for years. The accuracy and level of detail belied its compact size and funky design. However, 2 minor caveats came out of the review that stuck with me.

The first was that the Phi needs some serious power to sound optimal. The ability to use the Chord TToby power amp was ample evidence of that. The second was the slightly unforgiving or ultra-revealing upper mids and highs that needed a more studied matching process. Both caveats were not mutually exclusive.

The new Diana V2 could well be the answer to that matching process but it should not be seen as a watered-down Phi. Rather, this is an upgrade on the original Abyss Headphones Diana that came out a few years back and that does mean a different or improved driver.

It does have some Phi inspired improvements over the V1 though such as some new bigger pads and that thinner headband but the sound, it is different.

The Abyss Headphones Diana V2 may look similar to the Phi version but internally they are not. The weight difference could be a clue at 20g lighter than the Phi because externally there is virtually no difference in the materials and design save for the pads and colors.

The technical specifications are also a clue with a slightly higher resistance level of 42Ω compared to the 32Ω of the Phi. I would, therefore, presume that even though this is still a very large 63mm planar driver for its diminutive size, it is not the same driver as the Phi with its origins closer to the original Diana.

Abyss confirmed as such by stating that work was done on the original V1 driver in optimizing the trace pattern to the magnetic field to improve its resolution. The rough guide is a half-step away above the V1 and below the Phi in terms of performance. The Phi uses the ultra-low mass AB-1266 Phi CC driver so this one is a little weightier with a slightly thicker diaphragm.

That configuration does mean the volume or current is going to make a difference to your pairings.

The Diana V2 has all the trappings of a portable headphone aesthetic with its super funky looks, but it still retains the performance specs of a flagship headphone. Amps will still feature heavily for anyone wanting to buy one.

This particular sample is the Black Onyx version but the Diana V2 was supposed to come in 2 other finishes including coffee and Arctic White. Arctic White does not seem to be available even since our First Contact so I am not sure if and when that one will ever come out. It looked pretty cool at the time.

If you are new to the Diana series of headphones and like a bit of urban chic then the V2 is tailor-made for you. To get to this size and weight and deliver such a ‘big sound’ is just surreal. If I sound less surprised than you then it is simply because I went through the wow phase already with the Phi version.

The basics remain in place but also one or two tweaks that represent a solid leap over the original Diana and a slight physical refinement of the Phi.

Just to remind you the Diana V2 is a 330g (20g less than the Phi) full circumaural open-back planar headphone with full-sized 63mm planar drivers but it is tiny in every other way. They are not kidding when they call this the “thinnest boutique headphone in the world’.

The Diana V2 still retains that exquisite retro aesthetic with the square-like cups that have aggressively curved corning and a clever mix of leathers and soft Alcantara finishing stretched over a low-profile black-toned aluminum frame. There are very few moving parts in this design which I think improves it looks immeasurably.

The open-back plate grills also have an attractive Fibonacci pattern that blends right into the main cup housing. It does not feel tagged on or bolted in so the design looks seamless. 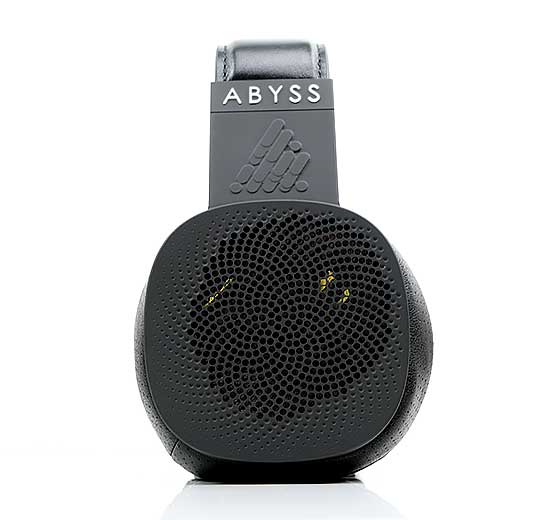 The material used on the Diana V2 are a blend of practical and luxury and are to the same standard as the Phi version. The one theme I have noted throughout is that none of the materials used are heavy-weight designs, something I think Abyss was very careful to avoid.

For example, the headband slider is a very attractive and super-light carbon fiber finish. The Alcantara wrap is also thin, very thin indeed but immaculately stitched in a matching black color. One thing different from the Phi finishing is the lack of pattern holes in the Diana V2 Alcantara wrap. It is a plain black all the way around this time.

The Diana V2 aluminum cups are coated with a polymer ceramic finish and colored either in black or coffee depending on what you bought. 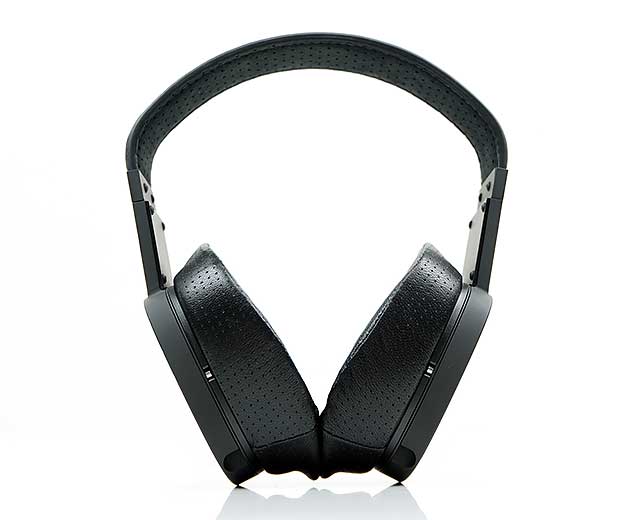 The matching perforated black leather pads, though small on the outside and not that deep, have a clever but sturdy funnel shape that expands in such a manner to deliver a full circumaural experience. A very smart design indeed.

If you are coming from the original Diana these are upgraded and bigger pads so they are much more comfortable. Also, compared to the Phi, they are slightly softer than the original grey pads. Abyss are no longer selling those grey pads so all new Phi and V2 headphones will come with these new slightly more malleable versions.

Out of the box, I can feel a physical difference from the older grey to the newer black pads with slightly less vertical pressure and biting into the sides from the lateral pressure. The clamping is the same so I am presuming the softer pad structure is dissipating in a more even manner than the stiffer edges of the older grey pads.

The Diana V2 uses the same 2.5mm mono plugs for the connectors as the Phi. The connection system is a highly contoured socket recessed into the base of the Diana V2 cups with a matching contoured jack and barrel system on the cables.

This wedge-like socket, when connected to the cable, makes for a much stronger connection that is less likely to break. It also makes for a very low-profile exit point so it doesn’t look ‘tack-on’ and cheap.

The one caveat from my Phi experience? Aftermarket cables from 3rd party supplies are harder to fit because of the limited barrel width. You need a very thin barrel.

You get a choice of stock cables depending on your likely usage scenario. The choice is more termination and length than actual materials because technically the wire is the same no matter what termination you choose.

Termination options included 3.5mm, 2.5mm, quarter-inch jack, 4.4mm, and XLR 4-pin on the jack side. For length, you can opt for the stock 1.5m if you are planning on moving around, and then 0.5m incremental increases to 3m for home use. There is a $50 additional fee on the checkout price for every 0.5m you add onto the cable.

Before Abyss there was JPS Labs, which, if you do not know, was and is a cable manufacturer. That is a plus for the supplied stock cables with the Diana V2 because they are finished to a very high standard indeed. For this review, we received the 3.5mm version with a quarter-inch jack converter and the XLR 4-pin, both in 1.5m formats.

The finishing on the stock cable is a thick but pliable rubber jacket sheath over a 24AWG custom copper alloy conductor which then splits into 2-wire per channel beyond the metal-Y-split using a transparent thinner jacket.

The 2.5mm barrels are uniquely shaped to fit into the base socket of the Diana V2 so they can lock cleanly. It does not mean the sockets are proprietary but they are quite narrow so thin 2.5mm dual-entry alternatives will work such as the Hifiman Single crystalline stock but nothing wider.

Though it matters less on open-back headphones, the stock cable is 100% microphonic free even above the Y-split. There is also an easy cable to work with having no memory retention or none of that annoying stiffness or flyaway quality you find on other stock headphone cables.

There is not a huge difference in the unboxing experience comparing the Diana V2 with the Phi. Having not reviewed the original Diana I cannot comment in detail but from the looks of it, we have moved from a plainer black box to the Phi white box though the accessories seem to be similar.

It is the graphical design and use of white that I like most about the Diana box design. It feels fresh, and on the side, and I still think it conjures images of the Houston Astro’s famed 70’s outfit for those that remember it.

The one small upgrade is the imagery on the Diana V2 box is printed right into the vinyl covering whereas the Phi box I received has a sticker graphic. A small but pro upgrade.

That accessory line-up has not changed and for a $1k reduction in price that is a nice feature to retain from the more expensive Phi sibling.

This includes the 1.5m 3.5mm terminated cable with a 6.35mm adaptor but you can order them with different lengths and terminations when buying the Diana V2. You can opt for 2m, 2.5m, and 3m lengths as well as a 4-pin XLR, 2.5mm, and 4.4mm terminations.

Both the cable and the headphones still come in that gloriously retro carry bag or ‘man pouch’ that the Phi uses. This is a double zipper soft nylon and leather finished carry case that fits the design aesthetic of the Diana V2 perfectly.

Inside, there is a protective dark foam inset with enough dips and contours to allow the Diana V2 to nestle safe and secure from unintended drops and movement. On each side, there is an internal flap or pocket where you can insert the cable and protect the drivers from contact.