Abyss Headphones have finally made their debut on Headfonics with the launch of their new Diana Phi luxury line planar magnetic headphones. This is not the first time we have been in talks with Joe Skubinski and his team at JPS Labs. In fact, we first mulled on an Abyss AB-1266 review as far back as 2013-2014 but at the time stock was like gold dust and rightly so.

We missed the moment but it is not as if we have not heard the AB-1266. Quite a few times actually at various shows in multiple setups. However, the best setup was Xi Audio’s Formula S solid state amp. This is an amp specifically tuned by Michael Xiao (formerly of Lotoo) and Joe to maximize the synergy with the AB-1266.

In short, this amp was built for the AB-1266 and the Phi versions and we have it right here. You can read the review also as a primer though sadly we had no Abyss gear to test it at the time. That i statement is not moot with the arrival of their new Diana Phi at the office.

So, what is so special about the Diana Phi? Well, to understand this properly you have to go back a bit to the original Diana launch around a year ago. The Diana was conceived as giving you a hefty slice of that AB-1266 performance but in a much smaller package and a slightly lighter hit on the wallet. 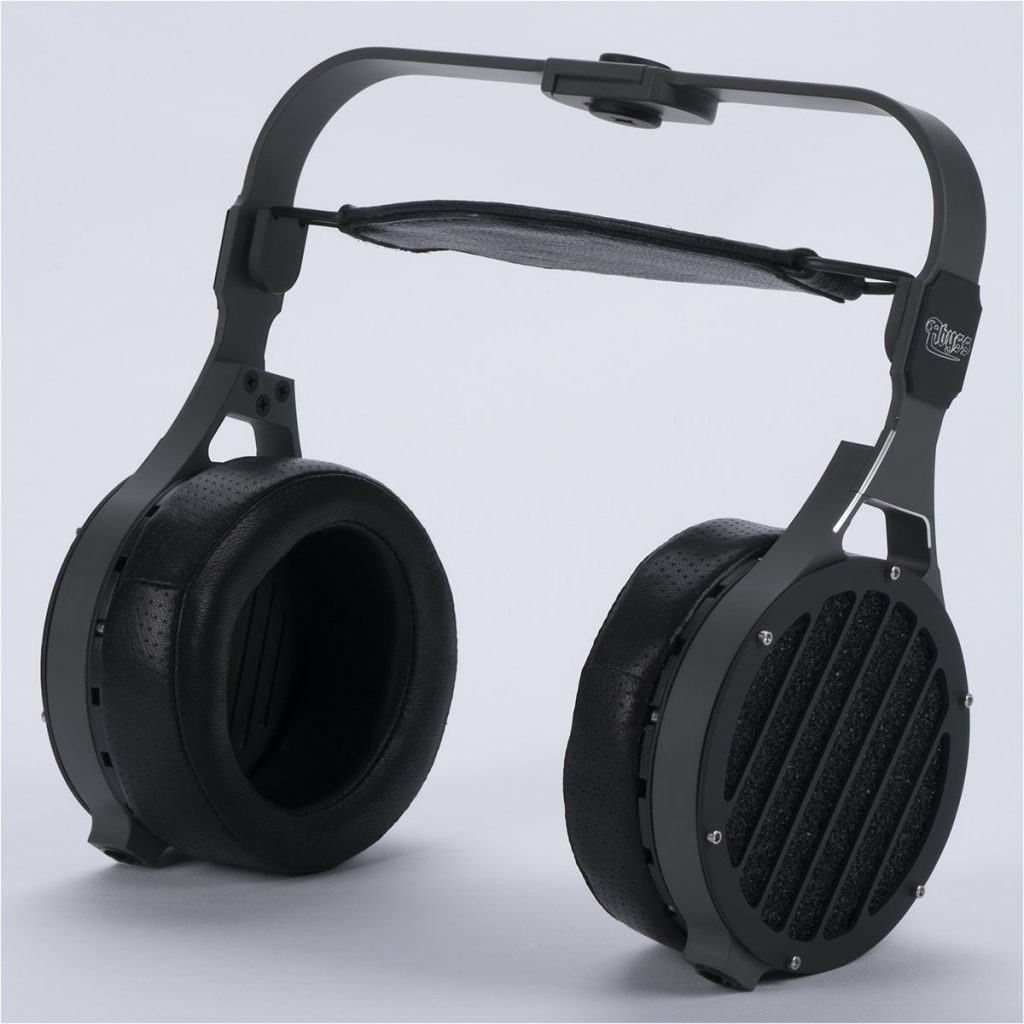 But it was not just about reducing the size down from the unique but definitely large AB-1266. The Diana was also about style and having a headphone that simply looked good, like not out of place in a Gucci Store.

The Diana visual was a million miles away from the stuffier and perhaps more macho approach to headphone design you normally see. It also came in a range of funky colors and matching man-bags. How cute!

But under the hood was no half-assed consumer-level driver. Nope, the Diana was a locally engineered open-back headphone and still had all the setup requirements of a high-end planar such as a resolving amp, good source, and decent recordings. Yup, portable it may have been, inconsequential is most certainly was not.

Roll on 2019 and now we have the Diana Phi. This is pretty much the same shape and style but the driver is now the same driver as their new flagship headphone, the AB-1266 Phi CC.

That is some seriously hardcore planar technology fused into a funky looking small headphone. Abyss claims the new driver will upgrade the performance over the original Diana and bring it close to their flagship performance as a result. 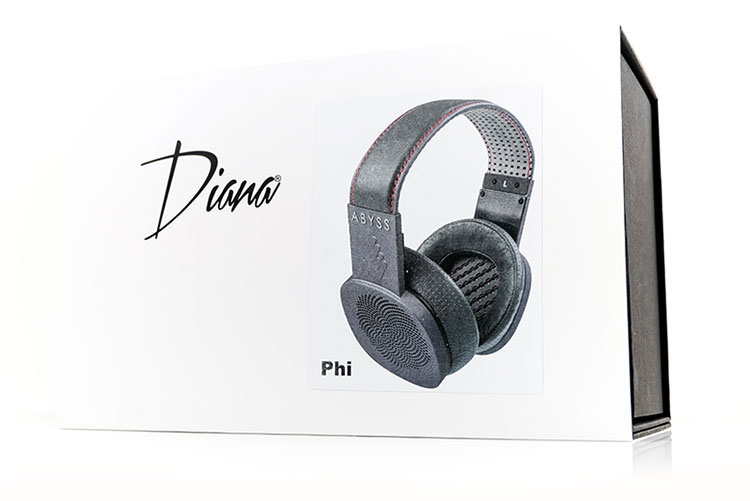 Right away I am digging everything I am seeing regarding the visual and physical vibe Abyss is giving out with the Diana Phi packaging. For some reason, in this hobby, we are obsessed with black or dark packaging with black painted or woody headphones. The odd time we get white such as Oppo PM-3 but rarely at the top-end.

The Diana Phi package is nothing like you would expect and it continues right down to the headphone itself. This was an unboxing full of “wow I did not expect that”.

First, the box is not that big but not really surprising given the Diana Phi is not that big. It is the graphical design and use of white that I like most about it. It feels fresh, and on the side it looks almost like it was inspired a little by the Houston Astro’s famed 70’s outfit for those that remember it. 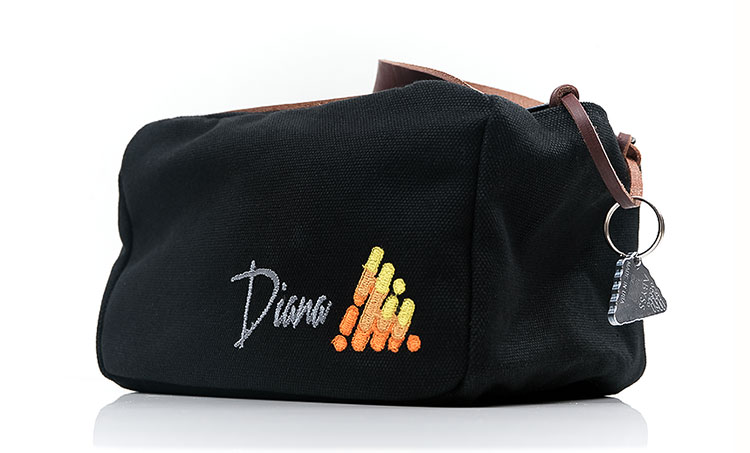 Inside that Astro’s vibe continues with a gloriously retro carry bag (it is a man bag) inside of which houses the Diana Phi. This double zipper soft nylon and leather finished carry case is the bomb I kid you not. I love its look and it fits perfectly with the whole Diana Phi styling vibe to a tee.

Inside you get will find your cable, the type of which will depend on what you picked at the checkout on their website. This one includes a 1.5m 3.5mm terminated cable with a 6.35mm adaptor as well as a similar length 1.5m cable with a 4-pin XLR termination. You can also opt for 2m, 2.5m, and 3m lengths as well as 2.5mm and 4.4mm terminations when buying the Diana Phi. 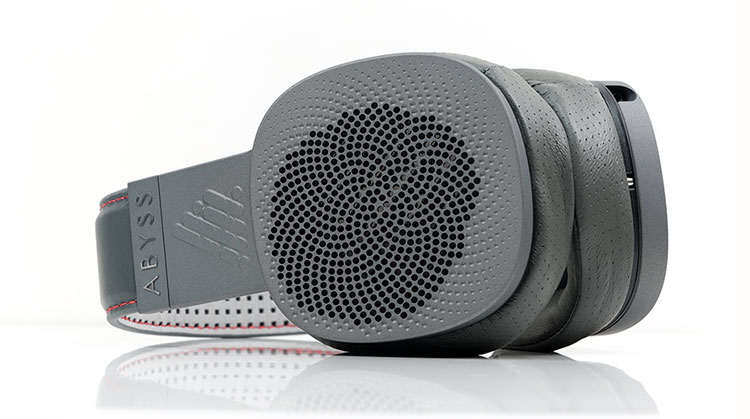 Honestly, I am blown away by how unique yet how sturdy the design is. Just to remind you this is a 350g full circumaural open back planar headphone with full-sized 63mm phi-planar drivers but it is tiny in every other way. They are not kidding when they call this the “thinnest boutique headphone in the world’.

But size isn’t everything, right? The design is just fabulously retro with a square like cups that have aggressively curved corning and a clever mix of leathers and soft Alcantara finishing stretched over a low-profile gunmetal toned aluminum frame. There are very few moving parts in this design which I think actually improves it looks immeasurably.

The plate grills also have this lovely off center patterned grooving that reminds me of some album cover from the ’70s or acid house era of the early ’90s. I can’t quite put my finger on a name so help me out here in the comments below. 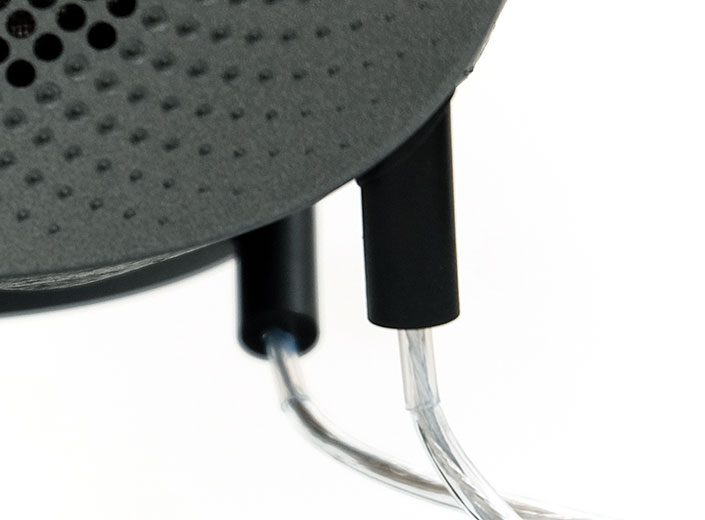 Abyss has opted for 2.5mm mono plugs for the connectors. Now some might feel that 2.5mm plugs are a little on the weak side and that is true when you think of connectors like the flush mounted Hifiman designs on the older Susvara and HE1000 V2.

However, Abyss has recessed them into the base of the Diana Phi and throw on some matching wedged barrel 2.5mm jacks on the accompanying cables. Two things on my initial impressions. The first is the way they slow in makes for a very low-profile exit point. The second is the wedge when inserted makes for a much stronger connection that is less likely to break. 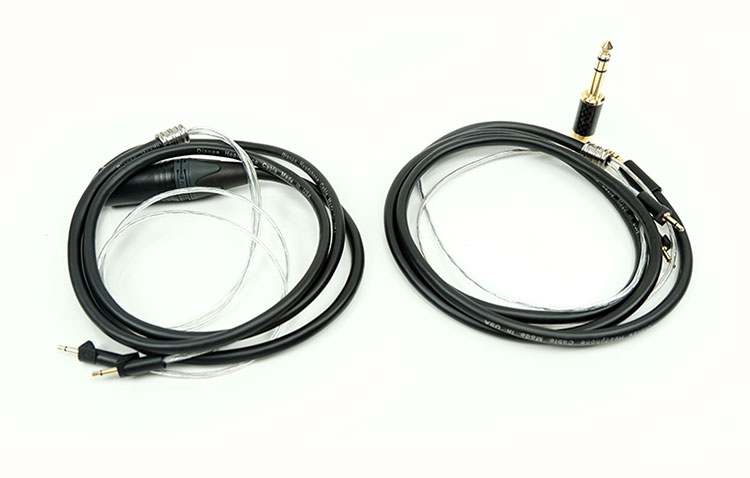 At 330g the Diana Phi is actually reasonably light for a full-sized planar headphone. Not quite as light as the MrSpeakers Ether 2 but certainly a lot more compact. On the head, my initial impressions are of a good fit but also a noticeable small contact point on the top of my scalp. Something a bit of memory foam might do wonders with in terms of pressure displacement.

The Diana Phi headband is actually quite thin but has only a thin layer of foam so it is a bit more exacting. It is very flexible though so it is not hard to get a suitable fit over the ear. The headband does seem to have just the right amount of length for my head and I consider mine on the small side.

The clamping pressure is spot on for me. Not too much but enough to prevent downward pressure on the top of the ear which is where I always find fit issues to be at their least comfortable with headphones. The leather pads are deceptively big on the inside also so there are no issues clearing your ear and resting around it properly. 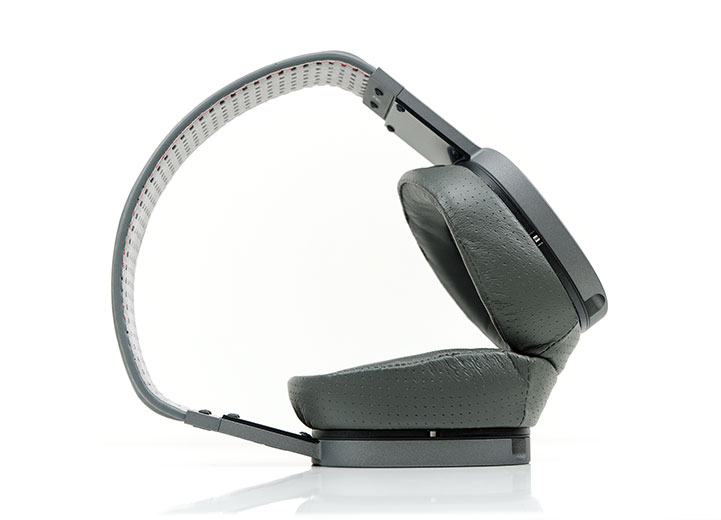 This is an easy but very distinctive high-end sound to describe, even in our initial impressions. We have been told to burn this in for around 100 hours and right now we are about half-way through that. I decided not to cook these overnight with white and pink noise. I wanted to hear any changes as we go along and there are already some changes.

So straight up the Diana Phi is a fast, highly resolving and clean sounding planar headphone. The transient performance is out of this world. The clarity and micro-detail retrieval are immense and sort of reminds me of Susvara levels of speed it is that good.

The bass is very linear and out of the box you could describe it as a little bit bass light but it’s been getting more and more defined the greater the number of hours put on it. It is a subtle but immediately noticeable hit when the sub-bass is called on and most importantly it is clearly defined.

Timbre is very much to the accurate side rather than the warmer or richer side of things. I would not define the Diana Phi at this stage as a euphonic sounding headphone but rather quite neutral, and very articulate.

Treble presence is stronger than the Empyrean or the Ether 2 and almost electrostatic-like in delivery. This is the type of headphone you want when you need to hear just about every detail a recording can offer. 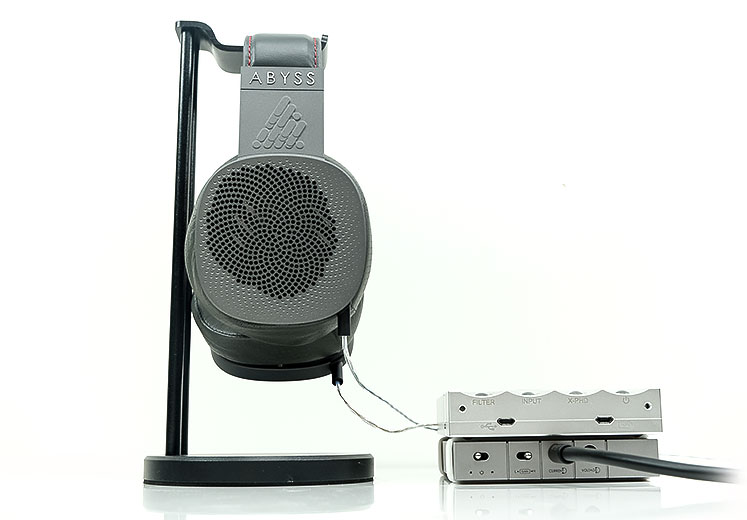 Yes, it does need power and current. The Diana Phi’s rating is 32Ω and 91dB so you will be cranking the dial up quite a bit more than the likes of the Ether 2, D8000 and the Empyrean. Cayin’s N8 is my most likely pick for good synergy and power for portable sources. Also, the timbre matching is nice with that tube output. The Lotoo PAW Gold Touch seems to have good power also but that clean reference tone is a little “too clean” for my tastes.

It will come as no surprise that already the desktop Xi Audio Formula S amp is shaping up to be the best match for resolution, retaining that wonderful pace and clarity but adding just a little bit of sweetness to the timbre that I think is important for the Diana Phi to sound good. Early days yet but I can see why the Formula S was so important for Abyss Headphones as an amp of choice. 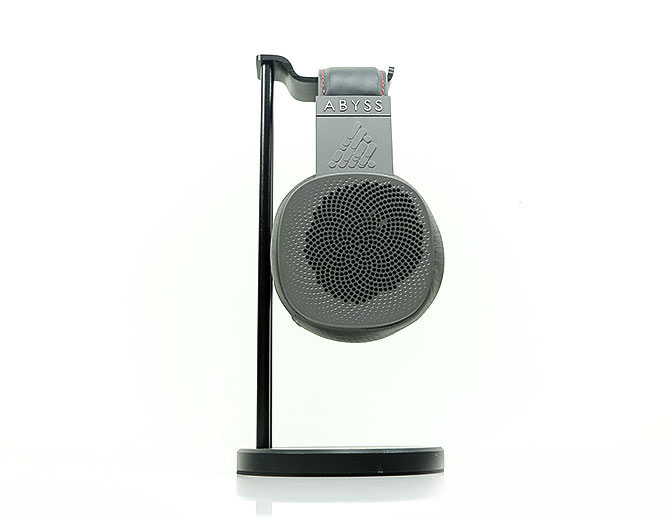 We are extremely lucky to be going through 3 world class headphones in the last 3 months with the Ether 2, Empyrean and now the Diana Phi. All of them have their own unique sound. The Ether 2 the warmest, the Empyrean perhaps have more of an emphasis on midrange smoothness and now the ultra-fast, ultra-clean and highly resolving Abyss Headphones Diana Phi.

The fact that this performance is stuffed into such a small and funky looking headphone is the lingering first contact memory for me in this feature. Looking forward to putting it through its paces on a lot more sources and amps and see just how good it can get so stay tuned!