It has been almost 3 years since I last reviewed an AAW CIEM, the W300AR. This was a promising mid-tier hybrid CIEM with a solid mid-centric sound, top notch stock cable (though I preferred silver), and a very good level of build quality.

Back then AAW had a number of differing offerings with the W300AR their top of the line and the W500 coming out a matter of days after we did the review.

Things have moved considerably since 2014, both with AAW and the competition and in 2017 their top of the line is now a hybrid 9 driver, unsurprisingly called the W900.

It isn’t cheap at SG$2,849 or just over $2000 US, but in terms of competitor pricing, it is in the right ballpark with the Noble Katana starting at just under $2k and the VE8 from Vision Ears also around the $2k marker.

The W900 is their flagship hybrid 9 driver custom monitor with technology which AAW claims does away with traditional phase and general coherence issues in traditional hybrid multi-driver designs. The driver configuration in the W900 is a single 9mm proprietary dynamic driver dedicated to bass reproduction and 2 sets of quad BA drivers, one set for the mids (2) and highs (2) and one Quad set for the “super highs”.

As in all multi-driver configurations, the crossover technology is super critical if you want to achieve a coherent blended sound and not end up sounding like 3 different sounds in one shell. This is particularly so for hybrid designs where you are using 2 different drivers, dynamic and BA, which in their own right have very different qualities. 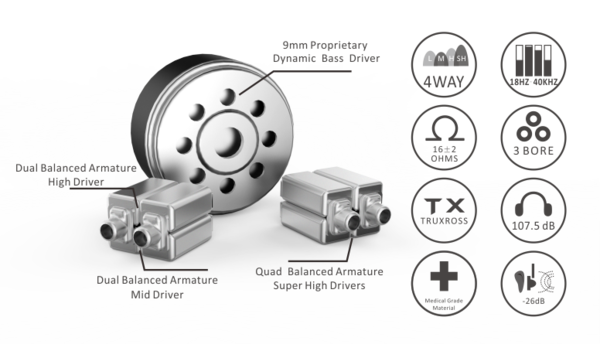 AAW also believe that the internal design with the inclusion of a front acoustic chamber design, combined with the TrueXross, should ultimately prove to be a class leader in delivering a coherent sound with minimal phase shift issues, i.e. everything should hit your ear canal at the right time and sound perfectly natural.

One final area that AAW are pitching as unique with their new W900 CIEM is the ability to filter the sound. Sadly this concept is not yet out in the market nor is the design and implementation finished at the time of writing so we will not be touching this in the review.

Essentially each W900 has a gap from the tubes to the tip of the nozzle to allow the insertion of a tuning filter which will change the sound of the W900. Specs are not available but I am expecting the normal bass, treble, reference style filter system with their own unique twist.

Previously AAW had split their product line into two categories, the Musiker Line and the Meister line. These categories are gone now and we have one simple unified line up with the W900 as the current flagship at the end of the CIEM entire range and a separate universal category for the Nebula and Q In-Canal series. 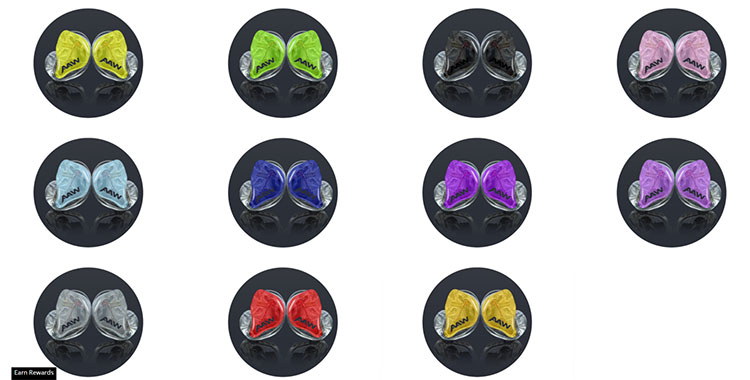 There have been no price changes since we last checked with the W300AR still at a very competitive SG$899 though since then the W350, W500, and W500 AHMorph have been added with prices higher than the W300AR. All the top of the line CIEMs from AAW are hybrid in design.

AAW use a slightly more traditional path to putting together your order for the W900. On the lower models, and to the right of their website below the purchase option, you can actually do a small amount of custom building before purchasing. However with the W900 that does not exist yet. You can purchase directly from their website but the custom discussion happens after.

I would encourage you though to browse through their gallery section to get a more accurate idea of how the various options look in real life and perhaps you will get some design inspirations for your own final choice.

Going through the options is a bit more old school than the new shiny Vision Ears online store or the excellent 64 Audio designer tool but the guys at AAW do have some beautiful options and also some unique to the W900. In total, I was shown 45 traditional or regular shell choices as well as their new Artisan series designs which I thought were excellent. 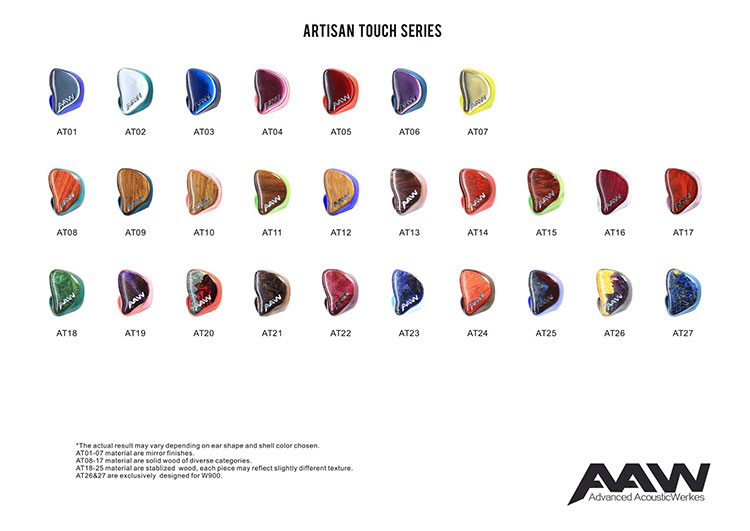 The design series is a bit more premium but I think the finishing is more aesthetically appealing. The first 7, from AT01 to AT07 use mirror plates with a highly reflective finish. Designs 8 to 17 use a variety of striking wood face plate designs with 18-25 using stabilized wood which is more durable and less prone to warping or cracking than natural, untreated wood. The final two designs, 26 and 27 you can only get with the W900 so if you see someone with these designs you will know right away what AAW product is stuck in his or her’s ear.

Shell choices range from translucent to opaque and one they call an exquisite color which usually includes a dash of glitter or flakes in the color of your choice. The Artisan series uses a mostly transparent shell in a color that is designed to compliment the face plate.

I actually went for AT07, yes yellow (translucent) and a big gold mirror. I have had plenty of organic color schemes in previous reviews of CIEMs so I want something I wouldn’t normally pick and something nice and loud for the camera to pick up on. Yellow seemed to be the ticket.

The length of detail and explanation AAW go into for the ear impression preparations by you the customer is excellent and very detailed. They can be downloaded in a single zip file and come in the format of image files so you can simply print them off and bring them to your audiologist who will probably appreciate the precise technical guidelines. 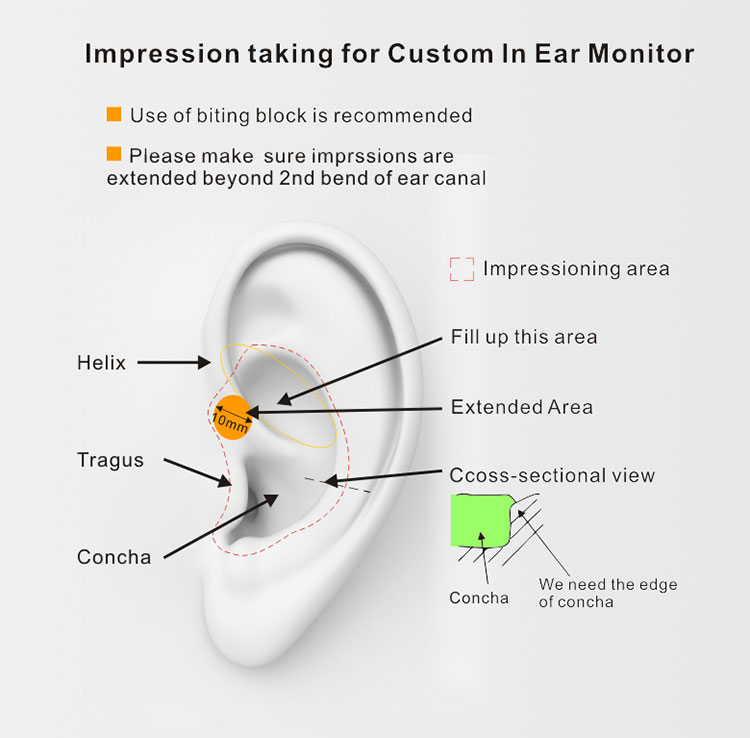 Note the recommendation is to use a bite block meaning AAW will require an open jaw impression. The bite block is used to keep the jaw steady whilst the clay cures and forms properly in your ear. 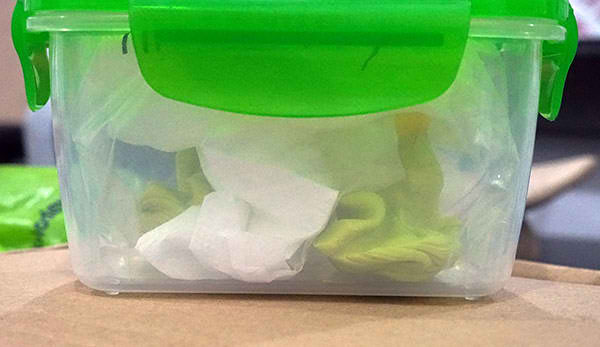 For those who are first timers, I recommend an experienced audiologist using a clay with mild expansion properties and an impression up to the second bend of your ear canal. Once completed throw them in a ziplock bag with a single scrunched tissue, put some air into the ziplock then close it so the air remains inside. Then pop it in a small food container and give it to your courier of choice for delivery to AAW.