The FiiO RM1 is a small Bluetooth controller that works with a wide variety of in-house, portable audio and car applications. It is priced at $17.99

Disclaimer: The FiiO RM1 sent to us is a sample in exchange for our honest opinion. We thank FiiO for this opportunity.

The FiiO RM1 is one of the more unusual and device-specific FiiO products and sells for just $17.99. I say unusual in the sense that it doesn’t have any audio capabilities being instead of a Bluetooth remote control which works with a wide range of Bluetooth specific devices. To tell you the truth I was not even sure if a review would be worthwhile, after all, we have all know how BT works but given that it does integrate nicely with the FiiO X7 I thought why the heck not eh?

Whilst it should be classified as a universal accessory the RM1 was introduced as part of the X7 growing ecosystem of complimentary support devices. I knew there was plenty of life in the X7, it is one of the main reasons I rank it so highly, however, it is only recently that I got an insight into how wide that range of X7 accessories would become. Not just the amp modules but a dock, the K5 amp and now this, a remote control.

Many of these accessories also equally apply to the X1, X3ii, and X5ii such as the dock and the K5, but the RM1 is only applicable to the X7 in terms of BT compatible devices within the FiiO range. The good news though is you can use it without even having to own a FiiO X7 as BT is a universal protocol and the RM1 will pair with quite a lot of other devices in your car, your phone and beyond. So this is not just one for the fans, it is for anyone who enjoys using BT remote controls.

FiiO have worked with known American BT specialists, Satechi (as far as I can tell), to produce the RM1. This is not a BT module built from the ground up in FiiO’s headquarters though conceptually the attached dongle are FiiO designed for a more unique branded touch. Essentially, the BT module is the shape of a button and circular measuring 35mm X 7.8 mm so not much bigger than a medium-sized alps pot. The materials are a mixture of hard plastics on the top and bottom and a metal ring and weigh just 10g including the battery.

Battery configuration is a CR2016 Lithium Battery which is a lightweight 3V low drain single-use coin battery. FiiO rate the drawdown time to be up to one-month continuous use before you need to replace it.

So, whilst it is not rechargeable, that’s the bad news but the good news is you can grab these off Amazon under various brand names such as Energizer for around $3 for a pack of 5. It will not cost you a whole lot to maintain the RM1.

The battery compartment itself is on the underside and you simply twist and take it off and drop the battery into its compartment and then slide the lid back on. Nothing fancy and takes about 2 seconds to complete. FiiO has also seen fit to throw in an additional battery as part of the accessory kit so you are good to go without buying any further batteries for about 2 months. 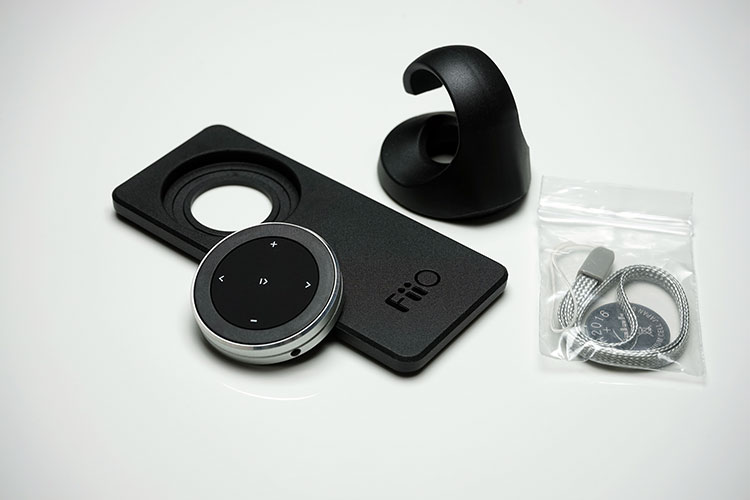 Aside from the main button type BT control FiiO have included two further portability devices including a dongle, lanyard and a steering wheel mount. The dongle is branded with FiiO and gives it more of a traditional remote control feel in your hand. It does not possess any electrical features; it is merely a slab of contoured plastic with a hold in the middle for inserting the BT module securely. Once secured you can hold the device as you would hold a small TV remote control.

The key chain fits into the main module via a small hole just to the left of the pairing and power button on the underside. A reasonably handy feature for those looking to carry it around via their write or around the neck via an additional neck chain.

It has fashion sensibilities in that manner in SE Asia where a lot of people tend to use this type of keychain to carry their phones or company ID cards. I would have liked to have seen a lanyard type hole in the main plastic dongle also so you did not have to detach the module from the dongle and switch to the lanyard. You will also not be able to fit the module into the dongle if you have already tied on the keychain as the circular cut out on the dongle doesn’t allow for threading which is a shame.

The RM1 also comes with a hooked steering wheel mount which allows you to disengage the module from the dongle and lanyard and snap into the top of the mount for easy access whilst driving. Given the precarious state of driving these days in my local area I can’t take my eye of the loons in front of me for one second so this is a handy little accessory to have particularly if you are using a BT enabled head unit or a BT enabled DAP such as the X7 in line out mode. 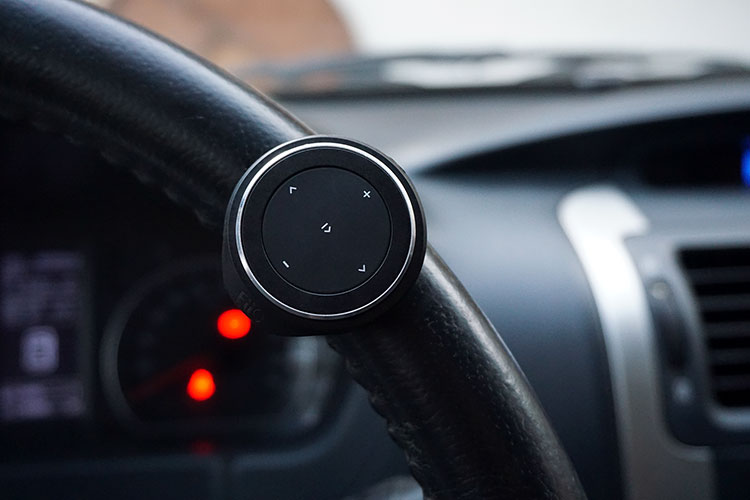 It is pretty simplistic in terms of design and build made of hard plastics but it does fit snugly onto the steering wheel and the module does feel secure in the top-mounted platform. There is a little bit of branding on the bottom of the steering mount with a light FiiO engraving. You can push the module out again via a gap on the underside of the mount.

How Does It Work?

The RM1 has two distinct areas of functionality located at the back and front of the BT module. No other area of the dongle or steering wheel mount has any interface or functionality.

At the back of the RM1 aside from the battery compartment you also have access to the power on and off button which doubles up as the pairing button. It is a really tiny button and if you have large fingers simply pressing on it flush with the tip of your finger may not always work. I suggest the tip of your nail to be sure.

A short press of the button will power on the RM1 and a single blue LED light at the front comes in for around a second then disappears. Power off is the same process except you need to press down on the button for three seconds and wait until you see the same blue LED light flash 3 times.

To pair the module with a compatible DAP, phone or other BT source this time hold the power-on button again for one second and on the first attempt to power on the unit will automatically go into pairing mode for 60 seconds. During this time the module will be visible to any device you wish to connect to it and if compatible you should be able to complete the pairing process as per the normal process on whatever phone or device you are using to pair the RM1.

On the front of the module are the action keys for control of playback (may include other functions depending on your source device capabilities). Volume is controlled by a top and bottom + and – button which can be tapped lightly for step by step control or continuously if you want some rapid volume changes. You can traverse through tracks and back through previous tracks via a button on each side of the module and in the center, you have play/confirm/pause. 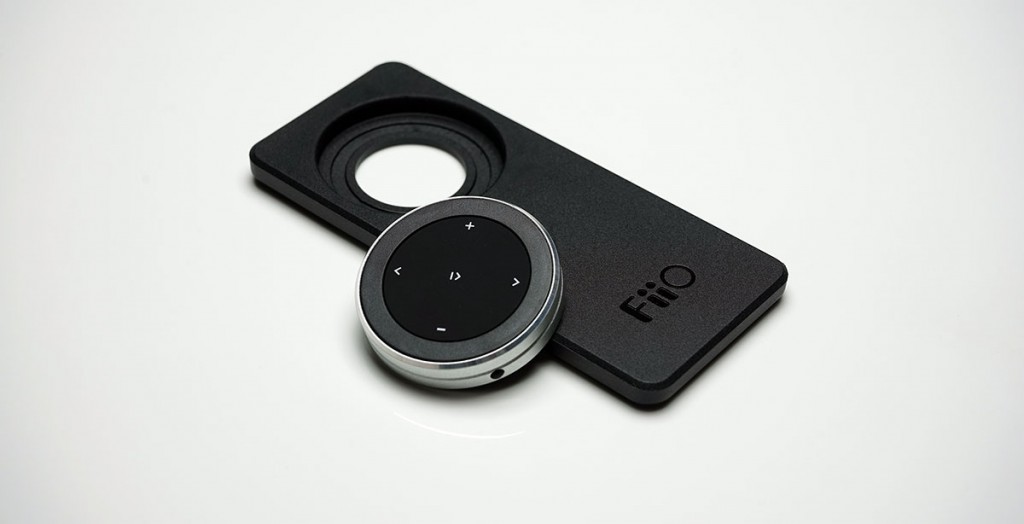 The RM1 should work on pretty much any platform that has the ability to pair with a BT device and has some sort of audio app or audio playback functionality. Note though it does not have dual functionality outside of audio apps so it will not allow you to use the buttons for navigation around menus etc.

All audio apps on the FiiO X7 (Android) worked just fine with the RM1 including FiiO’s own native app as well as HibyMusic, Neutron and Spotify. Volume adjustment was snappy, track selection was quick and had no issues switching from audio app to audio app even if all open at the same time. Nice and simple, that is how I like it. iOS functionality with the RM1 was similarly smooth and easy to pair with on a 6th Gen iTouch. Good news Blackberry fans the RM2 also pairs nicely on BB10 and playback functionality is 100% operational on the native BB10 music player. 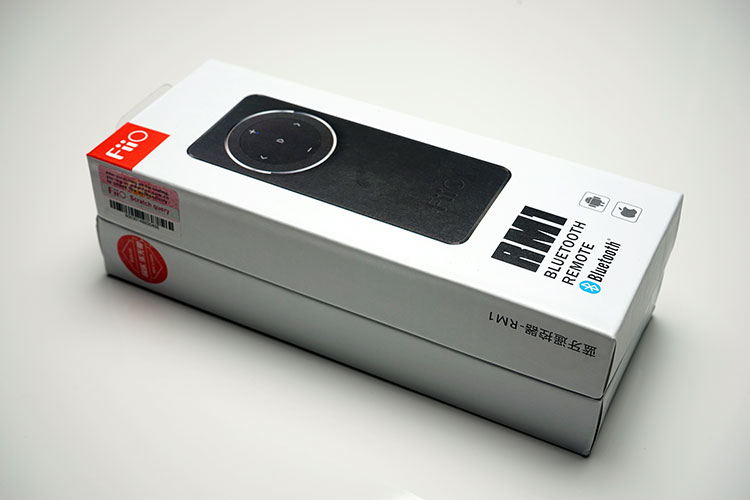 Right now the RM1 is a nice to have a gadget that will prove even more useful when FiiO launches their docking unit for the X range of DAPs. I do admire the inclusion of the steering mount for easy access to playback functions during driving. This is an important feature of the package given some country’s laws on driving as well as just general road safety.

I commend FiiO for including a nice set of accessories including the dongle, lanyard, a spare battery, and pricing at pretty much rock bottom. I do wish the lanyard loop was on the plastic dongle itself as an additional feature but no biggie. It a decent BT remote control for $25, works well with most platforms, attractive packaging and looks fairly durable.