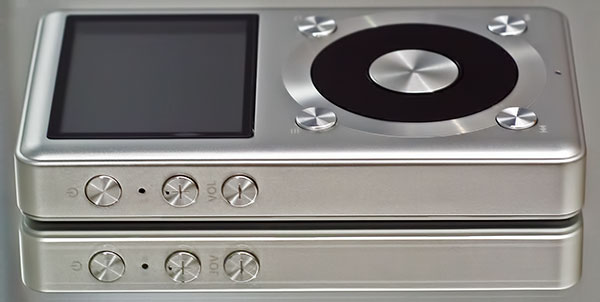 The X1 DAP by FiiO

My out of the box impression of the X1 compared to the X3 and X5 initially was not great and FiiO did warn me that I might not like it. The X1 sounded a bit thick, bass heavy and not as resolving as I had hoped with a narrow center focused soundstage. It seemed the X1 was struggling a bit for air also with an attenuated treble response. That was the first 30 minutes or so. Fair enough maybe it’s not for me but I have clocked up about 50 hours on it solid now over the last few weeks and comparing it with the X3, X5, the HM-700, a borrowed Sansa Clip, and even my old Zune HD I have tempered my thoughts a little and maybe, just maybe a little burn in has helped clean it up because it sounds far less thick now than my first listening session. Compared with the other $100 or less DAP’s it is perhaps the most complete sounding DAP for hi-res and general musicality.

Tonally the X1 is warm to neutral and more in line with the X5’s neutral but smooth tonality than the warmer and more laid back Wolfson driven X3. The X5 sounds more detailed and controlled than the X1 with a much blacker background. The midrange on the X1 is slightly more forward and center-focused than the X5’s more reference type signature but the X5’s wider and more accurate soundstage can leave the X1 sounding a bit congested. The X5 also sounds much cleaner and more spacious than the FiiO X3 but there will be some who will stick religiously with the X3 on account of that warm musical Wolfson sound that used to be the house sound of FiiO for many years.

Truth be told I initially dismissed the X3 when reviewing the X5 but I have come back to it time and time again for the way it the way it gels with husky female jazz vocals and other lazy days slow paced genres. Placing the X1 against the X3 in these genres and the X3 for me shines and pulls ahead of the X1. Both are decidedly musical and fun but the X3 is just more pleasurable and forgiving especially on female vocals. Shelby Lynn’s ‘Revelation Road” just sounds that bit sweeter and more lush on the X3 over the X1. Both the X3 and X1 though are more colored DAPs than the X5. Both the X1 and X3 have more elevated bass responses than the X5.

Overall for acoustics, jazz and slow-paced genres I still prefer the X3’s more lush, detailed and forgiving presentation over the slightly thicker and bassier but more neutral X1. There is still some magic in that old Wolfson house sound. The X5 reference sound and more convincing and accurate presentation should be the audiophile’s choice. I wouldn’t pretend that the X1 at $99 is getting you 99% of the sound of the X5, because it simply is too colored, thick and lacking in clarity to get close enough to justify saving the money. It would seem FiiO have the trinity of DAP’s separated quite nicely in that respect.

X1 versus the Sansa Clip

The X1 is more balanced, detailed and has less background noise than the minute Clip (Rockboxed). The Clip’s bass signature is more dominant than the X1 but at times it came across as boomy and soft rather than tight and impactful. The X1’s bass presence might be more noticeable than the X3 and X5 but it has better detail and texture than the Clips low end. For the first few minutes you might think “oh wow the Clip slays the X1 bass wise” but after spending some more time with it actually just feels one dimensional and with a much slower decay making it almost frustratingly omnipresent.

The X1 also displays a higher degree of control in the mids and upper mids and not as peaky as the clip is in the lower treble. The Clip can sound harsher and less smooth than the X1 as well as exhibiting a higher tendency for sibilance on vocals. Diana Krall’s husky jazz vocals on “Where or When” are far more believable and clean on the X1 compared to the Clip’s sibilant snake pit performance. In its favor, the Clip has a bit more energy in it’s treble than the relaxed FiiO X1’s treble response which can come across as bit flat and lacking in sparkle.

The Clip does very well for its lower price and it has a type of tonality that works well indeed for those are comfortable with a bassy but musical sound signature with some decent extension in the highs but not too fussy on the details. Just for me personally, the Clip lacks the X1’s superior balance, control, and noise-free background as well as at times sounding a bit too boomy. 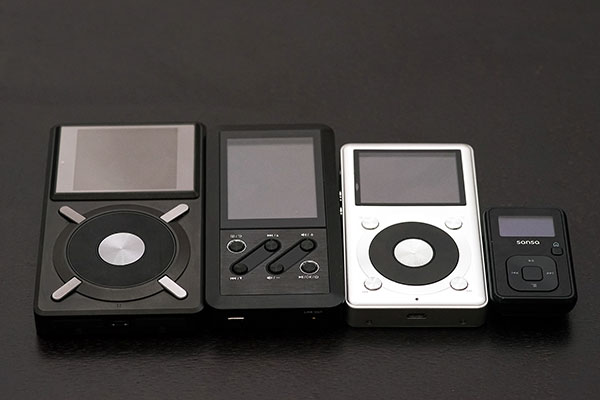 X1 versus my old Zune HD

I still have it and I still like it. The interface and form factor still make it a fun and sexy looking DAP though its lack of Flac and lossless codec support in general usually means it doesn’t get the same airtime as my other DAP’s. I remember when it first came out people were critical of the UI saying it was hard to use compared to an iPod but fast forward 2014 and it’s the bedrock of Windows on the mobile phone (Metro UI) so going back to it now I can’t see people having the same degree of difficulty. Certainly, it’s a lot more visually appealing than FiiO’s UI though lacking in the same audiophile options like line-out and EQ. It still can push 20 hours plus also on the battery life using MP3 320k so they got a few things right with the Zune that modern audiophile DAP makers are forgetting. Plus it has an Analog radio!

Playing lossy 320k MP3 (Pink Martini’s 1969 album) unamped on the Zune HD it certainly has the edge on the Clip with a much more balanced and even response and a higher degree of clarity. Using a nice smooth earphone like the Westone W4 it’s actually quite pleasurable without any undue harshness. It still possesses a degree of sibilance in the female vocals, much less than the Clip actually but a bit more than the X1. The X1 also has a slightly richer and weightier bass the midrange making the Zune HD sound slightly thinner but soundstage wise the Zune HD held its own sounding reasonably wide and spacious.

The X1 is more powerful than the HM-700 and has a much thicker and more weighted warm to neutral sound than the brighter but ever so slightly thinner HM-700. The HM-700 struggles more with full-sized headphones and is more comfortable with careful matching with IEM’s than the X1. Neither the X1 or the HM-700 have the biggest soundstages but the HM-700’s slightly more forward treble response might give listeners the impression the HM-700 has a slightly better high-end extension than the X1. In its favo,r though the HM-701 does have that balanced mode and seems tailor-made for their own RE-400 and RE-600 earphones.

Don’t even go there unless you totally hate the DX90’s sound signature and want something far less dynamic, crystal clear and wonderfully engaging to use. It’s like trading your V8 (by popular demand, not the V6) Mustang for a Fiesta Sports hatch. Of course, you are paying a fistful more for the DX90 but then that is the whole point. I do not expect the X1 to even compare favorably to the DX90 and it does not but for those cost-conscious people thinking they might have a secret bargain in sound and functionality you simply do not. The DX90 already bests the X5 in my review of it a while back and it my go-to choice of mid-range DAP for some time now for sound quality. 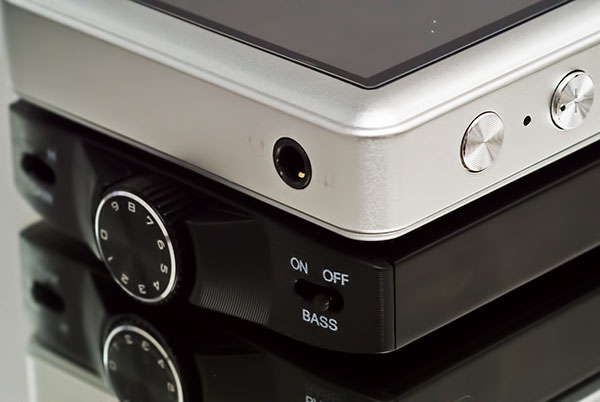 Of all the non FiiO DAP’s tested the X1 has the most grunt for driving headphones and high impedance earphones. The Clip performed a lot better than I thought it could to be honest but it started to struggle a little bit more on more demanding headphones such as the HE-400 whereas the X1 actually drove them significantly better if not as good as the X3 or X5. Strapping the X1 to a small but capable amp like the E11k in line out mode produces an even better and cleaner performance with headphones with a very low noise level. The E11k is a total revamp of the original E11 sounding more mature and balanced but still retaining good power and portability. The E11k and the X1 combined are a potent budget combination that does very well at driving a lot of medium powered headphones. If you really want to amp the X1, using line out combined with small portable amps such as the E11k, E12 or the E18 is probably going to be the most sensible option before we lose that budget appeal. Having done the majority of my testing with a Westone W4 I can also tell you the X1 is more than capable of working with a wide range of higher sensitivity earphones with minimal background noise.

The FiiO X1, the hi-res DAP for $99. Except that it is not the only hi-res DAP under $100 out there and costs more than $99 once you add a microSD card which is mandatory since it has no onboard memory. I liked the FiiO X1 but not as much as the X3 and a long way off from the X5. No surprise there and chances are most of the reviews you will read will say the same. Compared to the Nano, the Clip, the Fuze or the HM-700 to name but a few and there are some pros and cons you need to consider before jumping in and spending your ton with the X1. This after all is the real competition to the X1.

If you want total portability and long battery life there are other better options. The X1 is perhaps the largest $100 class DAP with the Sansa, Hifiman HM-700 and Apple’s IPod Nano all significantly smaller. Most, if not all the competitors have onboard memory, meaning adding at least 16Gb is going to set you back around another $20 making the X1 the most expensive of the budget DAP’s on offer. The FiiO UI, though much better than the X3 and some might argue even the X5, still doesn’t have the speed of the Clip or the gloss of the Nano’s UI. The Clip certainly lacks the real estate of the screen of the X1 but it does most things quickly and has plenty of options also if you Rockbox it. Even the old touch Zune HD UI is much more visually impressive and engaging than the X1.

However, if you want the best overall sound quality in the $100 class the X1 is your best choice for now. If you can bear with the lack of features listed above and go with just sound quality as your main consideration then the X1 is the most musical, most hi-res friendly and most powerful of the bunch just mentioned. FiiO said it is for the ‘young’ and not for audiophiles. I say it is for anyone who wants the best sounding DAP in the $100 category. I know plenty of people who I would not consider to be young, just fiscally challenged, who might trade in their Clip for this or buy it as a second DAP when they do not want to risk their X5 on their daily commute. Just don’t skimp on the cash thinking you are going to get something close or better than the X3 or 99% of the X5 on sound and detail.

Part of the Performance Parameter of Phone out