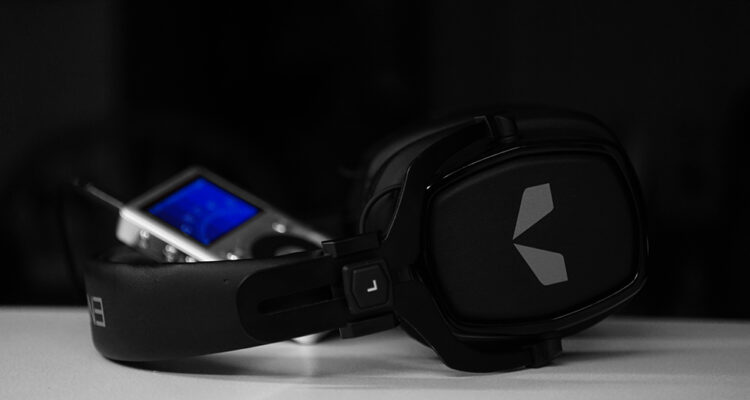 The RockMaster Headphone & IE by Encore

Encore and Sonic Unity have teamed up recently to produce a nice deal for us audio nerds.  They may be newbies in the audio circuit, but there is little doubt in my mind that these guys are interested in knocking on the front door of companies like Sennheiser and Vmoda and saying “Hi, I just moved in next door.  Here are some fresh baked cookies, homemade lemonade and oh…also here is our $59 gift box that includes these over ear headphones, as well as some nice IEMs.  Enjoy!”  These guys mean business, but can they really stand up to the likes of the other big boy companies out there?

It seems they’ve cuts costs by removing the middle men, skipping over everything between the factory and the consumer as well as implementing OEM components here and there in product design.  As a result, the actual cost the general public ends up shelling out is rather low for these products.  Encore is asking a meager $59 for both the full size model as well as their IEM via their Indiegogo campaign that is currently active.  No question, this is one of those nutty deals of the year type of thing if you are able to snag a set of these for such a price, hopefully you are able to do so before their crowdfunding attempt ends.  If they are fully backed before their deadline, the price for the Rockmaster Over Ear (OE for short) and the Inner Ear (IE for short) will hike up a fair amount.  If you are quick on the draw and want a great deal, click the link below and check out their Indiegogo page:

The Rockmaster Over Ear 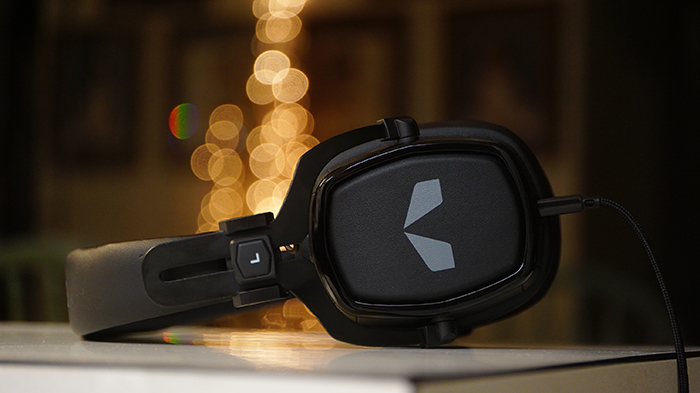 Due to the perks of being a reviewer, I received this headphone well before Encore began their Indiegogo crowdfunding, so I did not receive any retail packaging or supplies that may or may not come with the normal consumer package.  Truthfully, I don’t need anything else and wouldn’t want a fancy box with a cost effective attempt like this anyway…keep those charges down as far as possible, I say.  The OE (I’ll be referring to the Over Ear Rockmaster from here on as The OE) came with a very nice, braided 3.5mm cable that is detachable.  Very nice to see nothing proprietary here, you should be able to replace and use your own 3.5mm to 3.5mm cable without a problem, plenty of clearance and on the underside of the OE’s earcup, also and thankfully there isn’t much of a recessed 3.5mm output plug in there, so you’ll be able to use larger housing adapters without much of an inconvenience.

The OE build quality reminds me a lot of the Vmoda M100 (more on why this is funny in a good way in a bit) with a hefty, solid feeling aluminum Y-frame above each ear cup, very akin to the Beyerdynamic T1’s own Y-brace.   The headband is also very rugged and solid feeling: I am able to flex and stretch it a great deal and have the metal frame snap right back to a normal position, so it seems like it employed some type of spring steel or something similar.  The metal bar of the headband is covered in an extremely soft leatherette, not sure if this is real leather or not, but it is very supple and smooth.  Padding also isn’t a problem here, there is plenty of it.  Although, I do find it lacking in density and I consider it overly soft, offering too much give and not enough support. 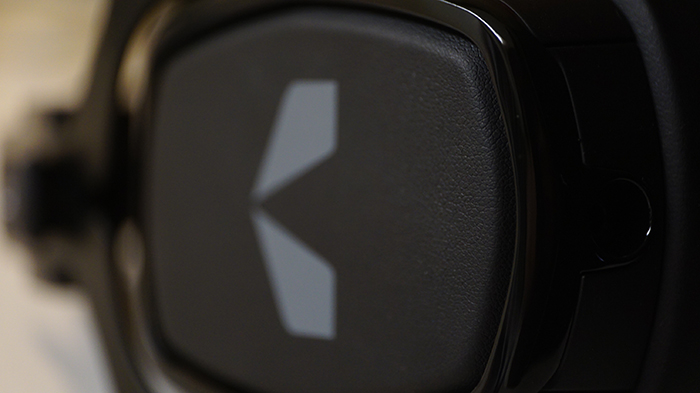 This is a rare case where I feel a more firm type of foam would have been better suited to adding to the headphone’s comfort level.   The OE’s earpads are stated to be memory foam, although and once again I think they are actually overly soft…so soft in fact that the hard, flattened plastic edge of the earcup these pads attach to can actually be felt a little.  The back plate of each earcup has a really cool leather-ish textured design, I think it is just rubber with an interesting etching or something: you can’t really tell there is texture there from a distance, but upon closer inspection the texturing of this material is similar to a high quality leatherette material.

The OE Sound: Bass and Imaging

Upon first listen, I’d boosted up a bass heavy track from an awesome group called Snarky Puppy, track title Sleeper:  My immediate first though of the sound signature was “Hmm, a Vmoda M100 clone, I see? The bass and stage formation feel very much like how I recall the Vmoda M100 to sound”.  Fast forward a few weeks and after I snagged a brief listen to a loaner M100…and what do you know? It really does sound very similar in those two areas, but only in those two areas of listening.  I can safely say for this price, nothing I am aware exists that offers bass quality on par with the Rockmaster OE for $59, I’ve also not heard a sub $100 headphone outside of the JVC HARX700 that sounds this large and vast in stereo imaging.

Certainly, this headphone is “the headphone” to get if you are on a small budget and enjoy bass and a nice, aired out sense of appeal.  The low end is very tight and fast, considering the price this is an excellent deal and you can close up shop and go home right now, no need to read on.  If you want one of the best bass quality experiences in a headphone sub $70, this is it.  It isn’t going to compete with some of the nicer open backs like the Fidelio X1 from Philips, but it is much smoother than say my Sony 950BT (one of my favorite headphones in the tier).  If you have heard the AKG K553, you’ll know what the bass texture and quality is similar to on this headphone: smooth and abundant.

With EQ enabled on my Fiio X1, combined with an SR71B from Ray Samuels (overkill combo, I know, but I wanted to test higher end gear to see how far this OE can go) the OE responded very well to bass boosting and became a bit of an omni-bass type of a headphone experience.  That means the bass became very plentiful and also didn’t lose much quality in the process of being boosted.  Not bad, Encore, not bad at all.  For reference, my Monoprice DJ lost control easily and sounded like garbage 4dB before the OE Rockmaster did. 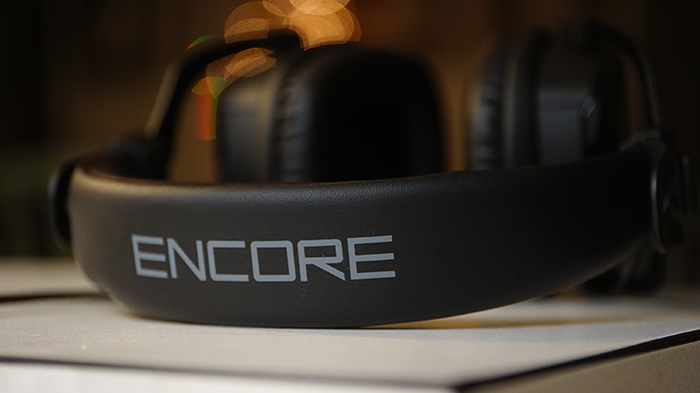 The stereo imaging is the real star of the show in this headphone, if you have heard the Vmoda M100 and similarly rectangular shaped sound stage experiences (IE: wider than tall but still plentiful in height) you can get a good sense of what this Rockmaster would sound like without having to actually listen to it, guess work taken out of the equation.   The sense of space and air is bar none the best I’ve heard sub $100.  The closest headphone I own in the sub $200 tier that bests it would be my AKG K533 that I’ve only just received for review.  True, the AKG does it better, but considering the price gap between them…I have zero complaints about the OE so far.

In fact, I feel odd about it because I feel like I’ve seen this headphone in the past…oh…the Rockit R-Studio headphone from a few years back: a headphone that sold for more like $130 and was revered as a hell of a deal at that price point.   These two headphones appear to use the same housing, but don’t let that sway you out of listening to the Encore Rockmaster.   I was able to get Encore confirm that they are indeed very different in sound.  The R-Studio was a great deal at $130, now price cut and with an added IEM in the package at the nice price of $59 Encore Rockmaster only makes it that much more of a sweetened deal.

The Mids and Treble

It doesn’t take a rocket scientist to know that this headphone sounds immensely recessed.  The entire spectrum feels pushed back and it is a very weird experience for me.   If you like the laid back sound signature, damned if you aren’t going to enjoy this headphone.  With that in mind, the OE is too recessed in the vocal experience to really enjoy the spoken or sung word.  Sure, instrumentals, especially in the Classical genre sound nice because of that association with wide stereo imaging and Classical recordings, but Jazz via Sinatra and Winehouse aren’t at all suited for this headphones very wide, very aired out, very laid back sound signature.

Clarity is where the ball rolled off the table, I actually don’t own any other headphones that sound as unclean, so there are no comparisons I can make except…well…ah…with the Beats by Dre and maybe the original Noontec Zoro.   In truth, this OE is a little better sounding than the original first gen. Beats by Dre in the bass and staging qualities before things went haywire, but similar in treble and mid quality.  I consider it heavily muted and lacking density with a high artificial nasal tendency.   Pick up one if you want to make your Beats loving friends jealous and have extreme wallet envy, if you end up actually doing so, please send me pictures of your friends face when they compare their $200 Beats that sounds like mud. 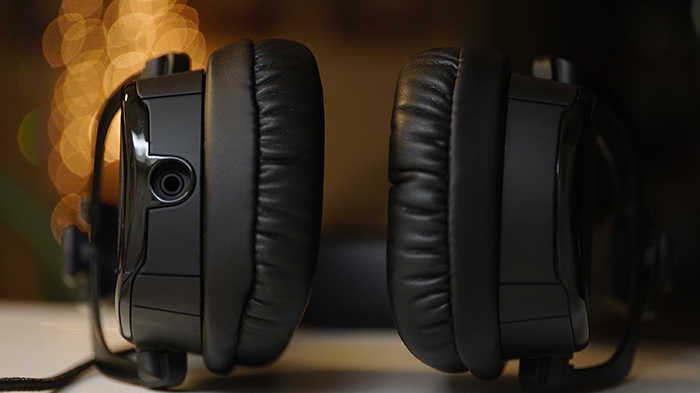 Treble is a real problem on this headphone and I consider it extremely artificial sounding, muted and lacking smoothness.  There are certain tracks that I am very fond of, such as Kaer Morhen off the Witcher 3 OST: a flute heavy track that sounds wonky and warped when there is any emphasis on the top end.  True, this headphone is not harsh or overly snappy, it just feels unclean and wrong from the upper midrange and upward into the treble.  Typically, headphones like this and in this price tier have shrieking treble that is very bright, painful and impacting to a wince worthy degree, but thankfully this OE doesn’t have any of those problems associated with lower end headphones.  Clarity is off and not to my liking, but as I’ve said three times past in this review…for this price I have no complaints on an objective level, due to the fact that I’ve not heard a $59 or below headphone that sounds this nice.

This is a great beater headphone, something that will make an incredible gift for casual listeners who sit and watch Youtube often, or even the avid gamer.  It isn’t the type of headphone you want to use with FPS games, as the imaging is just not sufficiently good enough for pinpointing sounds in the void, but by comparison to my Razer and Logitech “gaming” headphone, this OE from Rockmaster rocked their worlds in clarity on the bass and staging size in general.  I think people who just want a very decent set of headphones will enjoy these, no doubt in my mind.  Classical lovers on a budget are in for a nice treat, as are anyone who likes to listen to ambient tracks with an emphasis on the low end.