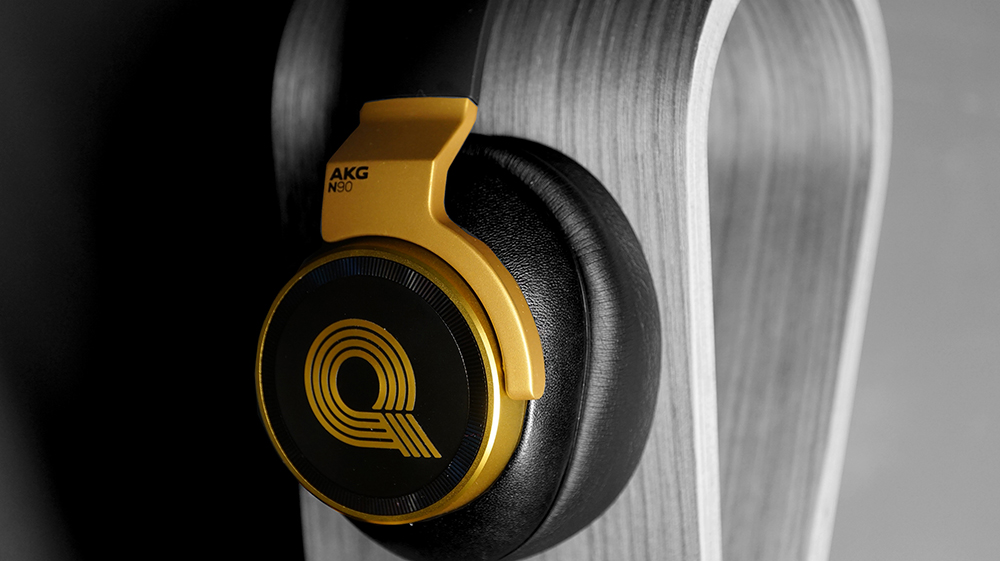 I was surprised to hear a purity that sounds more neutral than the AKG K812 from a few years ago, also priced roughly the same as this N90Q.  Do I think the clarity is an improvement over the K812? Yep.  But, it is also far less interesting and engaging.  Lots of purity and cleanliness is boring, which makes sense as to why it sounded like it was being fed from an O2 even with the USB DAC of the headphone active.  Harman took the opposing route of the K812 bass experience and inverted it to something a bit more prevalent in quality and tonally opposite.  This is a good thing if you like neutral bass with good quantity, but I am not one of those types.  I like vivid and deep, weighted bass.  This N90Q puts out a purer, pristine type of bass with good deepness potential.  Pick your poison, that is just my preferences and it is an important factoid for musicality lovers like myself to know that the K812 might be the model you would want for a more musical bass experience.

In terms of quantity, it seems more flat and in line with the rest of the headphone…which is a good thing I suppose.  The low end doesn’t mask the mids and in turn the headphone doesn’t have a veil or muted appeal.  It sounds crisp top to bottom, but I think the bass end of the spectrum is a bit too texture-less.  I think they purposely tuned it that way to insure mixers and engineers in the studio are happy.  I don’t think this headphone was intended for you to rock out to Jones’s own works of the past that offer a yummy low end.  I think it was meant for the more purist tone chaser who wants more quantity than usual on the bass.   The N90Q is a bit slamming for me and clearly has a much quicker response on the low end than the K812: decay factor is definitely better on the N90Q.  Summed up, this headphone offers very good bass quality and plenty of quantity. 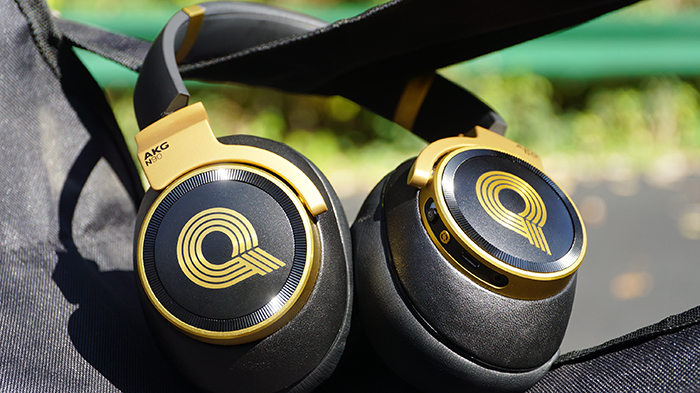 Thank the audio Gods that Harman actually spent time tuning this headphone and didn’t slop it together like Sennheiser did with the recessed mids of the HD800.  This N90Q feels more complete and flat than the K812 as well, which I didn’t expect at all.  The K812 has a noticeable shadow cast over the mids and treble due to the headphones more potent bass, whereas this N90Q feels like the midrange is cleaner and less prone to having the bass mask everything else.  I wouldn’t call this a vocalist headphone and again the headphone is fairly “neutral” in physicality and locale:  equal parts bass, mids and treble.  The midrange also lacks a lush appeal and void of a bloom effect that might be prevalent on something like the Audeze LCD3.  I do enjoy it more than the HD800 for vocals, that’s for certain! But, there is a clear quality difference between them with the HD800 edging the win on the rigs I was able to test with.

Surprisingly, the N90Q is denser sounding than the HD800, which sounds too thin to me by comparison to the N90Q.  Although, clarity on the HD800 is easily a bit superior and more pristine, as well as larger sounding and more realistically formed.  The N90Q bests the K812 noticeably here, thanks again to that more pure tone playing the biggest role in allowing the bass to stay put and not bleed into the midrange.   The overall clarity is not $1499 worthy and much like the K812, I consider the experience to offer a low price to performance value here with regard to clarity.

For $1499, I feel like it is priced a little too high for this level of quality.  Sure, the vocals are dense feeling and have good substance factor, but dynamics are not all she wrote and the last word of the listening experience.  There is such a thing has having too rounded of an experience, too much of “good” equates to a bit of a bore.  With nothing really sticking out to be considered “great” or for your ears to latch on to, especially with regard to vocals, the experience tends to feel a bit too linear and lacking an engaging quality.  My ears desperately search for something to latch on, but there isn’t anything there that sticks out enough to consider beyond “just good”.  Linear physical setup is a good thing for some, not so good for others.  I don’t consider the headphone more than moderately forward or recessed: it is a middle ground experience from top to bottom.

I think treble heads will enjoy this headphone if they play their cards right, as it offers a very sweet tone to the treble with software EQ in the mix:  gentle brightness is required when both the bass and midrange do not vie for attention.  With the overall placement of the sound signature a bit forward, but not too much and the treble needs to be boosted a bit to compensate.   With that in mind, the treble experience of the N90Q seems like it’s the star of the show.  I enjoy it very much and feel it to be properly setup in almost every way: not too bright, not overly slamming, but also not boring or lacking.  This becomes a problem with the dialed EQ’s on the ear cup that shift my thoughts on this subject drastically.  I can easily go from just right to too much with a short churn of the dial that forces Bass AND treble at the same time to raise or lower.

Classical and Rock really shine on this headphone and I’ve found myself really enjoying stringed instruments a lot, but that is only when the headphone is set to a more neutral experience and with software EQ active.  Without it and when I shut off the software EQ, the N90Q stock sound sounds immensely artificial.  Summed up, with proper EQ this headphone sounds very good up top and without it active, the headphone does not and sounds overly digitized.  The synthetic stock sound of the headphone through usage of the 3 sound stage modes active, as well as with its USB function really bothers me a lot and I find it weird that it can alter that much when I use the 3.5mm cable instead.  Truly, it should be very easy to hear this upon first listen and believe me…it does go away with proper EQ’ing.  I find this incredibly dumb that this headphone requires EQ to sound its best, yet it has EQ dials build into the side of the ear cup.  If there ever was a bigger face palm, I cannot think of it. 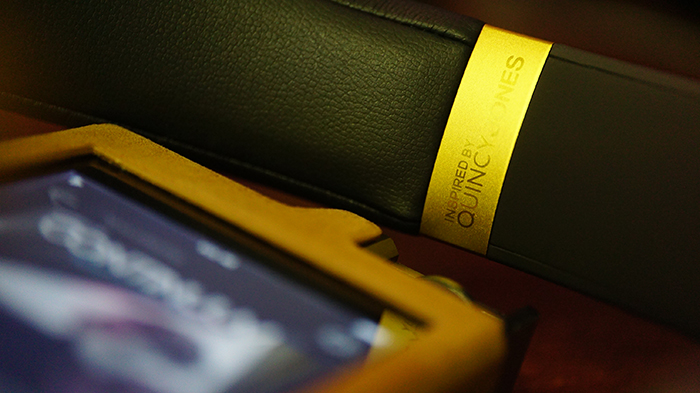 The N90Q has dedicated button on it that alters the sound stage presentation, all of the modes are awful except one.  Only one of them sounds normalized, while the others sound too intense with reverb and extremely unnatural.  When you press the button, you get a horridly annoying “cheeesh sha sha sha sha” sound effect as the headphone cycles to the next staging mode.  Oh my goodness, that is just the second worst sound ever…the absolute worst sound I’ve ever heard is that popping sound also from the N90Q when you first turn it on!  Come on, Harman! Jeez.  Those sounds sound not be there, you can do better.

Thankfully, one of the modes functions well and sounds good.  Staging prowess is actually very good in depth of field and rivals my Edition 5 from Ultrasone, which is a headphone I regard with very nice depth of field and airiness.  Sure, it isn’t as vividly wide or tall as the K812 and HD800, but for a closed headphone this is very nice.  The N90Q offers a solid sense of air and separation for the design type, but is does lack width and height that can compare to most other Summit open headphone designs out there.  This is a step in the right direction, right now it seems like only Ultrasone and AKG offer a great stage in a closed design, so as a sound stage lover I feel happy enough with the N90Q’s spacial appeal.

I’ve never been so confused by a headphone design before.  Just who was this headphone made for?  Sure, it sounds good and rivals the K812 in some ways, but is also lags behind it in others.  It can’t be for studio mixers if it runs off battery power, nor can it be for portable users due to its size.  It seems intended solely for home listeners who are okay with it being battery powered and don’t mind it, for those who want an all in one product without the need for a USB DAC or amp.  This is a lower end Summit level product and it certainly sounds good, no doubt about that, but the linear appeal seems a bit lack luster to me.

Summit headphones generally have some amazing quality that sets it apart from the rest of the pack:  Audeze has incredible bass and lively, forward mids.  Sennheiser has a massive sound stage.   So, to have this N90Q not offer much in the way of a unique sound, I am not sure where to go with this information beyond saying just that…it is a good headphone all around without any real faults.  The bass is pure and clean, the mids are just fine and of a good quality, the treble might be the overall winner of the sonic side of the debate here, as I’ve found it to offer a nice potential with proper EQ.  But, I think AKG and Harman invested too much into the wrong places and for what this headphone offers.  They could drop the EQ dial and the USB DAC and sell this headphone at $899 and it would be a real best buy product for price to performance.  I am not sure why they’ve opted to not do that.

At the end of the day, the N90Q is the poster boy of “middle ground” and the definition of shoulder shrugging.  It isn’t great, but is certainly isn’t bad for the price.  Considering all the functions it has to offer, although not quite implemented in a way I would have preferred or that are at all beneficial to the buyer, the N90Q is a good alternative to the K812.  It offers a different sound signature in a closed back version and will appeal to those who want $999 sound quality without the need for a separate USB DAC or amp.  Just “good” everything in raw quality may equate to a boring tonality to some, but there is no doubting the headphone is accurate and very neutral on tone for the most part.  I think this headphone will fill a niche for people who want a little boost on the bass, but without much exaggeration anywhere else.  If you want exaggeration, no worries, you can get it with proper EQ, as the headphone responds immensely well to boosting both in the bass and treble regions.