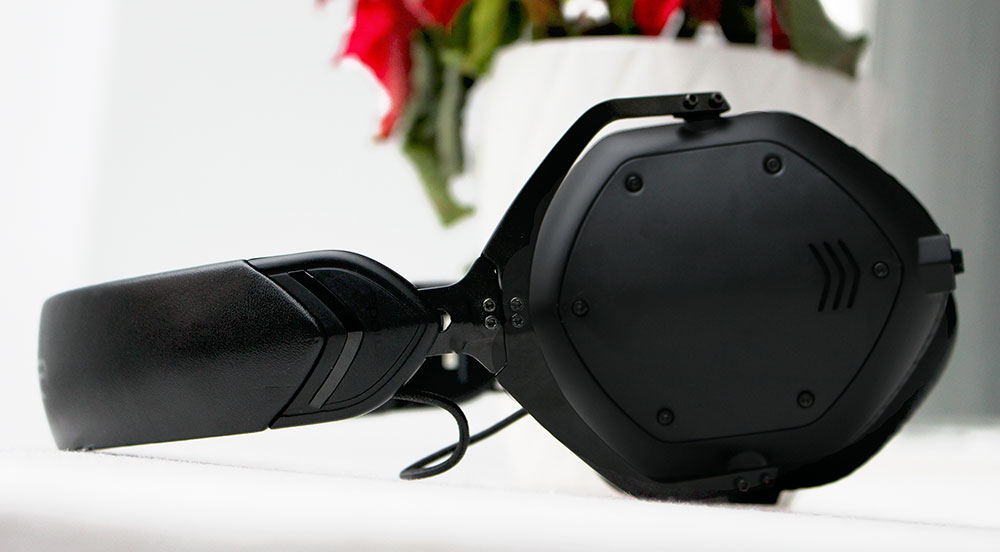 The Crossfade M-100 By V-Moda Revisited

Smit grabbed a V-Moda M100s for the first time recently and wanted to give his own thoughts on this headphone. Now we had done one review on the M-100 a long time ago via Dale but I thought it worth a second opinion given its enduring appeal so here it is.

V-MODA are a US audio company (with a design studio in Milan, Italy), specializing in the production of headphones, earphones, amps and accessory items. Their presence has notably increased over the years and they have become well-known in the field of audio, such is their extensive online marketing campaign. Designed and headed by Val Kolton, a professional DJ and music producer, V-MODA aims to satisfy the masses by intertwining stylish finesse with a sound to match.

The M series (for Modern Audiophiles) was cultivated in 2010 with the release of the V-MODA M80 set of headphones. Following the warm invitation from critics, the M-100 was soon to follow in its footsteps with an elegant design and convincing sound. It is for those reasons that the brand has been the recipient of numerous awards and critical acclaim.

The M-100 headphones themselves, feature a patent-pending 50 mm dual diaphragm driver with the implementation of an ergonomic headband and analogue noise isolation. Retailing at a modest $270, the headphones come in a metal design with the ability to customize its base color, shield design and even the option to include logos and other artworks.

The Crossfade M-100s arrived in a compact white and orange box which included an exoskeleton carry case, 2 audio cables and a 6.35 mm gold plated adapter.

I am surprised at how much V-MODA were able to fit in such a small little box though I feel the exterior packaging could have been made less busy and more minimalist to make it look and feel more premium looking. 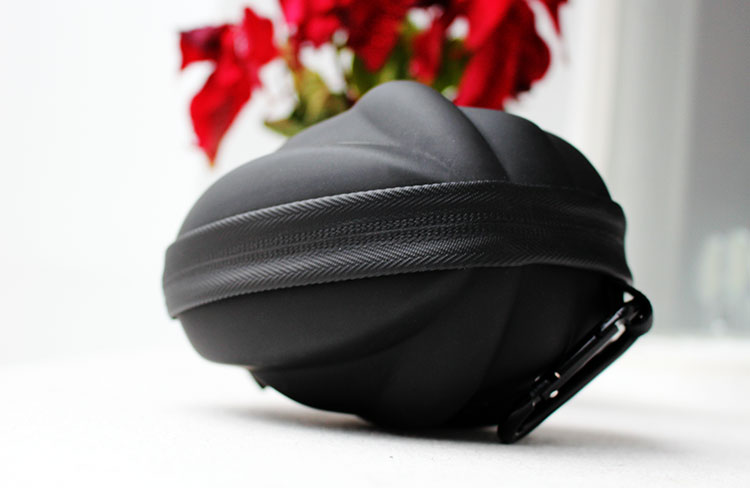 Part of V-MODA’s appeal has been their ability to customize their headphones which helps to spruce up an otherwise dull pair of cans. As mentioned, the base color and the design of the outer shields can be changed to the consumer’s liking. V-MODA have even gone as far as allowing your own artwork to be laser-engraved on the housings of the headphone.

The company also had durability in mind when inventing these headphones as both the headband and frames are constructed from a steel-grade finish. The gear has even been tested to survive harsh environmental conditions including low and high temperatures as well as UV exposure, humidity and salt spray. 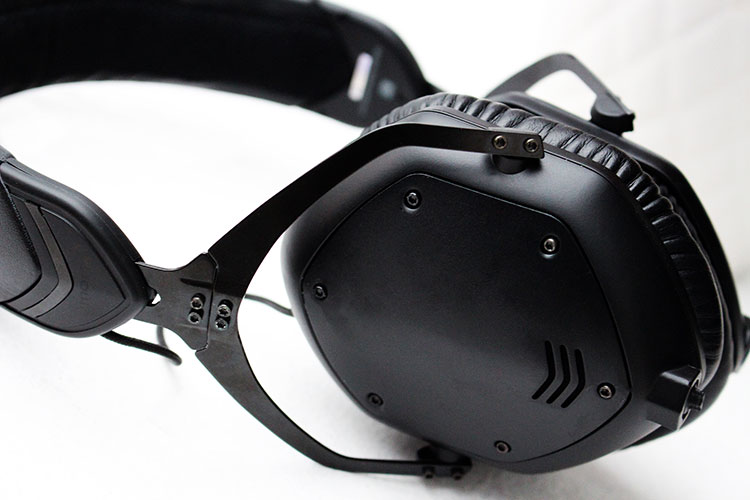 The clamp force of the M-100s is quite strong initially but this does subside a bit with time. Although the headband is much comfier than the Master & Dynamic MH40’s, the overall headphone is not very comfortable and thus cannot be worn for long periods of time. Perhaps this is an area V-MODA could have worked upon to deliver a more ergonomic design. However, there is the option to purchase extra-large memory cushion pads which can substantially help with the comfort issues whilst out and about.

The headphone itself weighs in at 280 grams which is relatively lighter than the MH40s and MW60s. In terms of isolation, these headphones do an above average job of preventing sound leakage but just an average job of isolating against ambient noise. Thus, in particularly heavy background noise environments, the volume needs to be matched relatively higher to close yourself from the outside world.

The bass of the M-100’s extends remarkably low into the sub-regions with impact and authority. An example of this is Silent Shout’s “The Knife” where the underlying bass delivers hefts of slam amongst a warm tonality. While the bass is certainly not lacking and does verge on bass-head levels, I have found that in certain tracks it can become a bit overwhelming and even fatiguing. This is exacerbated by the decay times which are a bit lengthier than that of the Master & Dynamic’s MH40 and MW60. In comparison to the HiFiMAN HE-400S, the former’s bass feels more taut and cleaner than the M-100’s rumble. The M-100, however, boasts a more commanding presence in the low-end frequencies beating the 400S in both sub- and mid-bass extension. In tracks such as Daft Punk’s “Doing it Right”, the extent of the mid-bass boost becomes apparent and even bleeds into the lower mid-range frequencies. Fans of clean, articulate and detailed bass should therefore look elsewhere but enthusiasts of voluminous, impactful and moderately punchy bass should definitely consider these.

The mid-range frequencies are slightly laid back in the overall mix compared to both the bass and treble resulting in a v-shaped sound signature. In comparison to the MH40 headphones, the V-MODA’s v-shape is more emphasized with a pronounced dip in the 0.2-0.5 KHz area next to the MH40’s slight dip in 0.3-0.5 KHz region. The result being a relatively more forward and balanced sound from the MH40s. In terms of the signature of the M100, the mid-range is delivered in a crisp and energetic fashion which is not to say that it is harsh or abrasive though because it certainly isn’t. Instead, some warmth is worked into this part of the frequency spectrum owing to the powerful bass section. Details are adequately portrayed though it does lag behind both the HE-400S and MH40 headphones in this regard.

Akin to the signature of the mid-range, the treble presents as crisp and sparkly with decent extension. It is a pleasant part of the spectrum as there is no perceived stridency or harshness that would otherwise detract from the M-100 presentation. Compared to the MW60, the M-100 shares a similar peak in the 10 KHz region though the MW60’s treble is more pronounced offering better extension and air. To its advantage though, the M-100 is more forgiving as is evident in Tom Jones “You’ve Lost That Lovin’ Feelin”; a track which can be quite grating in certain headphones. 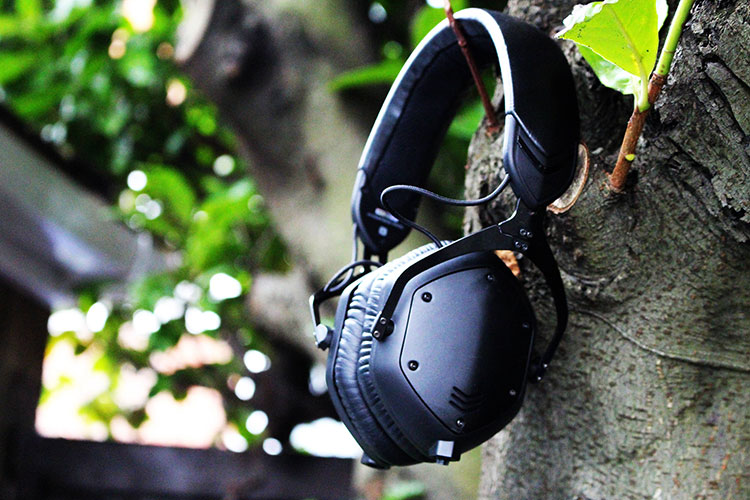 The V-MODA Crossfade M-100 has the same 32 Ohm impedance rating as the Master & Dynamic MH40 and MW60 set of headphones. This means that along with the sensitivity of 103dB they are relatively easy to drive with the ability to be driven out of a common smartphone or laptop device.

Testing the M100s out of this portable set-up, the M-100 did not have the most detailed presentation but the sound was certainly musical and engaging. The mid-range becomes even more smooth and pleasurable but instrument separation does not match that of the Fiio X7 or the X5ii DAP.

With this stack, the M-100s have a much larger headroom and spacious sound that is more involving when compared to a standard laptop experience. Detail levels pick up and the decay response becomes much tighter and pleasurable. This is a great combination.

Owing to the midrange dip, the M100s present with a spacious sound with good projection of sonic cues in the dimension of height and width. Depth levels are merely okay but the overall 3-dimensional sound is involving and enveloping in presence.

Instrument separation is slightly better than average but could have been improved through better defined transients and shorter decay speeds. This is especially evident in bass-heavy tracks where congestion results because of the domineering bass notes.

In summary, the V-MODA Crossfade M-100s have stood the test against time and have been a crowd favorite in the general marketplace. Would I say that their sound deserves the hype it gets? No. However, when you take a step back and examine all of the facets that the M-100s brings to the table such as its portability, customizability, durability and design then it is much easier to realise how solid an all-rounder the M-100s actually are.

While the sound isn’t the best in its price range, it is a bass lover’s delight with its punchy and ample bottom-end. The forgiving treble in addition to its bass make the M-100s versatile in the genres it can cope with, which is a huge advantage to those with a wide music collection. The only extra feature missing is Bluetooth capabilities which V-MODA have sorted out through the release of a new iteration touted the Crossfade Wireless headphone. Perhaps this addition is a worthy successor to the M-100s but if not, the latter is already well-established and a respectable release from the Italian audio company.