I really can’t spot any differences between this HD7 and the HD8 when it comes to treble. They both appear the same in every way to my ears. A while back, a Sennheiser representative told me ( also confirmed on a Youtube video interview that I found days after speaking to this representative ) that the HD7 was the HD8 with inferior materials used in the building process. They both use the exact same drivers. Spiking at 30,000hz just like the others in this series, the HD7 appears laid back, lackluster and very forgiving. If you want to see measurements, a swift search on the net will result in a few different sources painting the same general picture…and it really isn’t good. There is an nasty treble drop off and peaky performance rating on the HD7 and HD8 and combined with the loose feeling midrange, the treble only feels that much more weak. After the first few days of listening, it was blatantly obvious that this HD7 was using the same drivers as the HD8. Sennheiser had confirmed this well after my suspicions arrose: Same drivers, differen’t materials, different tuning on the HD8. I can’t speak for anyone else and again this is all just my opinion, but I couldn’t hear any differences between the HD8 and HD7. The question of the day is: Does a DJ really need supreme clarity and accuracy? 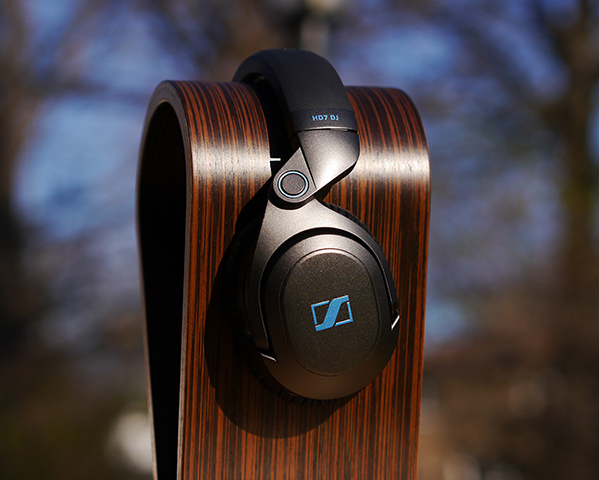 I hate to repeat myself, but the HD7 just sounds 95% the same as the HD8 and it was truly difficult for me to spot any differences. Still loose and flabby by comparison to a few other top tier mid range headphone vocal experiences out there.

I foresee a problem if you are a critical listener with all three of these headphones. As with the HD8, the measurements for the low end resulted in a truly massively elevated rendering, yet some measurements were a bit different on the HD7 and the HD8. Could this be because some audiophiles who measure headphones were using leather pads on the HD8, and velour pads on the HD7 and forgot to make sure both sets were measured with the same pads? I originally had this problem over the course of the first few days of listening. Hell, I even told Marcus that the HD8 had more bass. I’d forgotten to remove the leathers ( which do seem to add a little extra bass kick ) and swap them for the same velour pads I’d installed on the HD7.

Bass and Vocalist purists might not enjoy these when they are listening at home at moderate volumes, however here is the oddity behind all this: At high volume and with proper amplification and source pairing, all three models have very nice midrange. But, this is only at higher than normal volume at extremely loud venues. For DJ usage, I think all three models will be very enjoyable. Lower to average listening volume is shoulder shrug worthy and I found all three to gain more control in the mids at higher volumes with plenty of power behind it.

Click on next page for The HD6 Mix impressions…