The Gramo One Earbuds by Celsus

Putting aside the fit/response, which I will dip my toes into later, the stock sound of the Gramo One earphone is a slightly mid centric but overall a well-balanced sound signature with excellent clarity. This is a largely neutral tonality but with a hint of bass warmth and a sparkling top end that largely behaves itself with most recordings. Being an open back earphone you get a really nice sense of space and separation also and more than decent headroom but it comes also a slight loss of bass snap and slam. It not a brittle sounding signature but it’s definitely erring to the clean side of things rather than any sort of rich or thick analog sound. It’s great with detail and there is a nice sense of coherence regarding the overall tonality and presentation but it is a delicate one rather than a forceful response.

It’s all about the fit and the first recipient of that factor, both good and bad, is the bass response. I mentioned before that I felt the best fit for the Gramo One was over the ear and facing forward towards your face as this was where I could get the best balance of bass extension and quantity without sacrificing the mid and treble performance. At best it has a very pleasant if polite fullness but without the slam unless you push it tight into your ear. The bass extension is excellent actually for an earbud but not earth shatteringly deep. Nevertheless it perhaps one of the most convincing bass responses I have heard out of an earbud for my tastes.

What it lacks in quantity I do think it makes up for in quality, pace and accuracy. Texture is good with decent definition and body. This is a mature and subtle tuning with reference type feel to it that I think a lot of neutral freaks will enjoy. If you prefer a flattish bass with decent extension and slight fullness of sound in the mid bass and prefer to avoid slam and humps then the Gramo One bass is just right. If you’re a bass head then forget it unless you like pushing them in all day long with your fingers. Think of Hifiman HE560 bass more than Audeze LCD-2 bass and you get the idea.

The Gramo One mid-range is open, spacy with plenty of detail and separation and almost ‘open headphone like’ in imaging and clarity. Its errs slightly more to the analytical side with a more delicate feel so if you are after rich thick mids you won’t get it with the Gramo One instead you will enjoy higher than normal levels of transparency, a very nice level of articulation and an endearingly relaxed but accurate quality to its timbre. Definitely nothing objectionable in the midrange of the Gramo One.

It is not a totally linear experience though, it does sound slightly forward with my angling to the front of my ears with a slight elevation in the upper mids a tiny dip beforehand meaning some vocals can sound a little distant or slightly forward depending on the pitch of the vocal and the mix of the recordings. Vocal presence is controlled and slightly forward with low levels of sibilance for instance with Diana Krall’s “Too Marvelous For Words” making it a very engaging and relaxing experience, but on more rocky tracks such as H.E.A.T’s “Living On The Run” Erik Grönwall hugely dynamic male vocal presence seems slightly further back in the mix though by no means recessed or blunted.

The treble on the Gramo One has a bit of a lift and by no means strident it does have plenty of top end sparkle with decent levels of decay keeping any nasty lingering splashiness at bay especially in the lower treble cymbal or percussion work which is a blessed relief. I can really dig it also for shredding and fast tapping guitar work where that clinical speedy attack is needed. It only ever sounds harsh when you start pushing it or if the source itself has a particular treble leaning bias. It sort of reminds me of the Fidue A83 signature in that respect; a lightning fast and detailed top end delivery but takes no prisoners and can be difficult to match to certain genres or sources that are too top heavy.

It’s an open earphone and tricky one to get a sweet spot but when it’s sitting just right the soundstage is surprisingly good compared to what I have heard before from other earbuds. It sound credible and believable compared to mid-tier open headphones though naturally not on the same level once you start thinking HE560 or the IE800 but much better than most BA IEM setups in the same price range such as the RHA T10i or the UE900s.

Soundstage on the Gramo One is all about width more than depth with good headroom and decent extension. Imaging in that respect is above average with good left right separation that never sounds disjointed or unnatural. I did say I hated earbuds but the big soundstage and openness of the Gramo One combined with a controlled neutral response and coherent presentation was actually quite enjoyable. I could get used to this in all honesty. 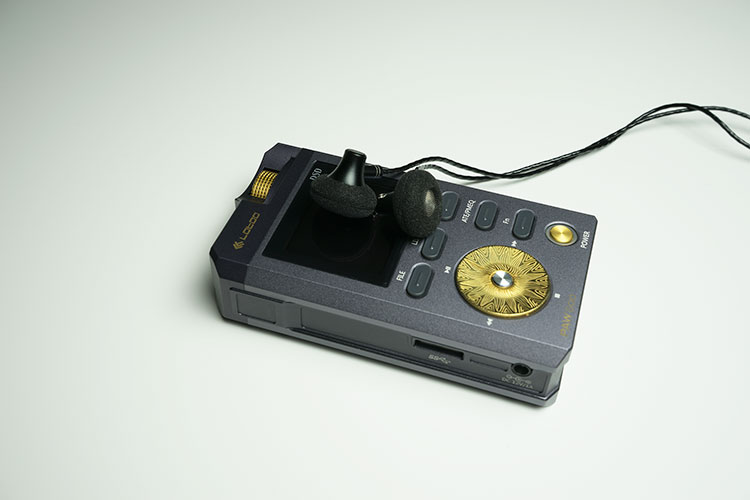 The good news is the Gramo One is a relatively easy earphone to drive out of most dedicated media or audio players. At 32 ohm impedance the Gramo One it is not super sensitive to noise but stacking with a small headphone amp does indeed make a bit of a difference over direct out from a DAP or smartphone. That decidedly neutral signature with a slightly north of neutral treble sparkle combined with a relatively flattish low end will require some thought when matching. My own personal preference was the Lotoo Paw Gold’s warm and polite but very resolving headphone out signature though appreciating that a $2k DAP may not always be the available option to most. In that regard the above average dynamics and detail of the DX90 came in a solid second beating out the neutral but slightly less engaging FiiO X3 Gen 2 and the lower resolution but still musical AP100 from Hidizs.

IEM amps I would recommend include the Vorzüge VorzAmp Duo, the Cypher Labs Piccolo (amp or amp/DAC) and the RX from ALO Audio. These amps are designed to varying degrees for IEMs and earphones with higher levels of efficiency and as such noise performance is excellent and gain control above par.

Normally I would vouch for the RX from ALO given its all-round superior dynamics, black background and attention to detail. However its really already a neutral little amp and for the Gramo One my preference is for a warmer source that really delivers on the above par midrange performance or extends and fills out the bass quantity a bit more than the stock performance out of a DAP.

The Cypher Labs Piccolo though took the prize for the most balanced match with its smoother thicker and richer tones and slightly greater emphasis on the bass response. Mind you low gain didn’t cut it with the Piccolo, mid gain is where the magic starts with the Gramo One and the Piccolo. The RX had better separation and detail retrieval overall but it lacks the overall raw power needed compared to the Piccolo to drive the more demanding Gramo One with ease. For example, sound quality from the DX90 and the RX is really nice, tracks such Blue October’s Fell Again is so well controlled, detailed and with an excellent level of resolution especially with the vocal mix but to get it at this level with the RX almost at full gain I had to pump up the DX90 line out to around 240 which is one of the highest gain settings I have done on the DX90 for anything. By contrast 240 on the DX90 using mid-gain on the Piccolo was more than enough power to drive the Gramo One. Both are quality amps but this time I am taking the smoothness and power of the Piccolo with me for the Gramo One.

If your preference is for a stronger bass performance with a rich midrange then the VorzAmp Duo is an interesting choice with its bass and treble hard EQ options at hand. Tonally it’s a really good match with some nice lush mids though not quite as nimble a performer treble wise as the RX. If your treble shy and want to tame the top end a little then the Duo and Gramo are an excellent match. Flick on the bass EQ and you can expect a far more dominant bass response much to my delight. Not the most defined or controlled (it can be a tad soft) but certainly a big step up from the stock bass response which tends to be very cautious in quantity indeed. This would be amp of choice for EDM and hip hop lovers with a far meatier bass response than either the RX or the Piccolo is capable off with the Gramo One. It’s not accurate, it does color the sound significantly but it adds a very nice musical dimension to the Gramo One.

I will not go as far as to say I am an earbud convert after reviewing the Gramo One but if you are a fan then the Gramo One is a very good earphone indeed for those seeking an ‘audiophile’ presentation. If you want a neutral signature with great midrange, a supportive bass signature that never dominates but extends pretty well and a sparkling and articulate treble then the Gramo One has the chops. It won’t satisfy bass heads unless you can match it with an amp that can tweak the stock sound and to that end the Gramo One does indeed respond rather well to EQ adjustments. It also has zero isolation so it’s not much cop out and about unless you have a nice quiet background.

A warm source with a rich signature matches perfectly with the delicate, clean and precise signature of the Gramo One. My advice though is stay away from overly neutral or bright DAP’s or amps that can thin out the Gramo One signature making it at times a little harsh or too bright, especially on recordings that have a busy top end. 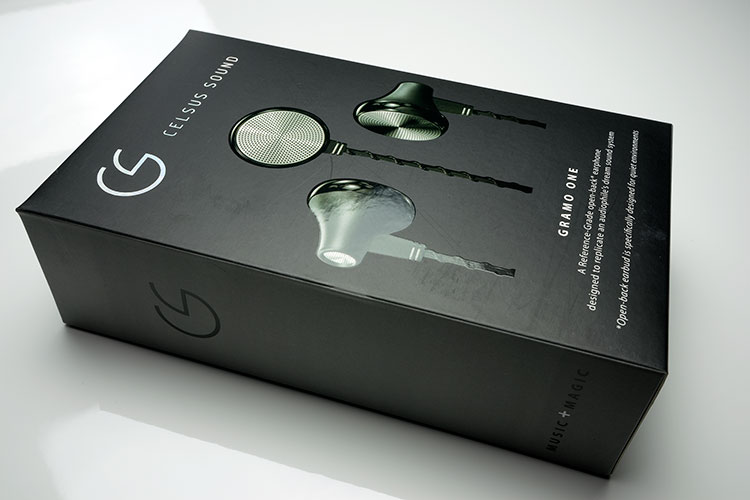 Does it compete with an open back headphone? In certain ways it does actually. That open airy sound and large soundstage (though wide and not deep) is very reminiscent of some top end budget or mid-fi cans such as the Grado Prestige series. However the caveat, as with a lot of earphones, is the fit and the angle. Get the angle right and the Gramo One is a joyful experience and a lot of fun but move it around just a little and suddenly everything changes. Your mileage will most certainly vary depending on how they fit in your ears so take my own impressions with a pinch of salt in many respects because my angle of fit might not be your angle of fit if that makes sense.

Is it fair value at $249? That’s a tough question to answer from an earphone avoider who craves isolation when listening but if I am in the market for an earphone then the Gramo One has to be on the list at least sound wise. It surprised me more than I imagined it would and I enjoyed it far more than I originally anticipated. There is still a bit of work on the total package to do and a rev 2 retail package with some more tips, accessories and a slightly smaller box and hard case would go a long way to justify the $249 price tag. If they do that then the Gramo One is good value for money.