The 1More E1001 was tuned by Luca Bignardi and he did a very good job, in my opinion. In the details, you can notice the aim to make the earphones enjoyable for the masses most of all. The tuning is consumer oriented yet it’s also still enjoyable for most ambitious audiophiles within the budget price range.

BA armatures were once known for a sterile and analytical sound reproduction, but in this case, they are tuned on the softer side, avoiding harshness and edginess. With a strong bass, the overall signature is warm but also engaging.

Cohesion is often an issue with hybrid designs. This is also the reason why I prefer multi-BA systems over hybrids, even in the high-end sector with regards to musical masters like the Oriolus MK II. But things look a bit different with the E1001. The separation of dynamic bass and detail of the mids and highs is not as obvious.

I sometimes have the impression that quite possibly there is no crossover and the dynamic driver actually plays full range with a dual-BA placed on top for better resolution. My point is that the BA receivers do not show the typical characteristics of such designs. It could also only be the tuning or some lucky interference, though.

As with most all consumer headphones, the bass is emphasized. It’s not a linear and dry monitor-sounding low end. There shouldn’t be any difficulty to identify the bass driver as a dynamic driver. Quite a lot of air is being moved and sometimes the sound was too boomy for my taste. However, it is not excessively done and the amount is not too fatiguing. I’d say it’s less than the Piston’s V2 and more comparable with the Sony MH1.

The voluminous bass comes with a deep rumble and a lively punch. This is what most people miss from BA armatures and thus the hybrid-design does make sense. We are not talking basshead levels, though. But that trend is slowly fading anyway.

Luckily the mids are not overshadowed by the bass. They are clean without peaks. It really hurts me to work out the flaws and mention them, because I think the overall experience is very good. But as far as high-fidelity goes, male voices can be a bit muffled and brighter voices come out a bit tinny. If you are coming from lower priced earphones, this might not be easy to notice, but I do want to mention that BA receivers are capable of even better linearity.

I do guess that the slight coloration was done on purpose to a) balance the bass and b) to avoid whacky or edgy voices. I make it seem much worse than it actually is, but the point I want to bring across is that the E1001 are not analytical monitors – which, depending on personal preference, can be a big positive.

The treble is noticeably recessed for the overall warm signature. Not having measured these, my ears want me to believe that the treble starts to roll off as soon as 4.5 kHz. There are some minor peaks that weren’t matched between 8 and 9 kHz, one on each side of the earphones, but the peaks were nowhere enough to cause sibilance. Timbre of violins couldn’t fully convince me and horns sound a tad fuzzy. I do like how the treble extends to 13 kHz, however, there is not much going after that.

Sometimes a trumpet would pop out more than expected or cymbals hid with little self-awareness. Overall, the treble experience is rather smooth, though. There is a bit of sparkle to be found too. 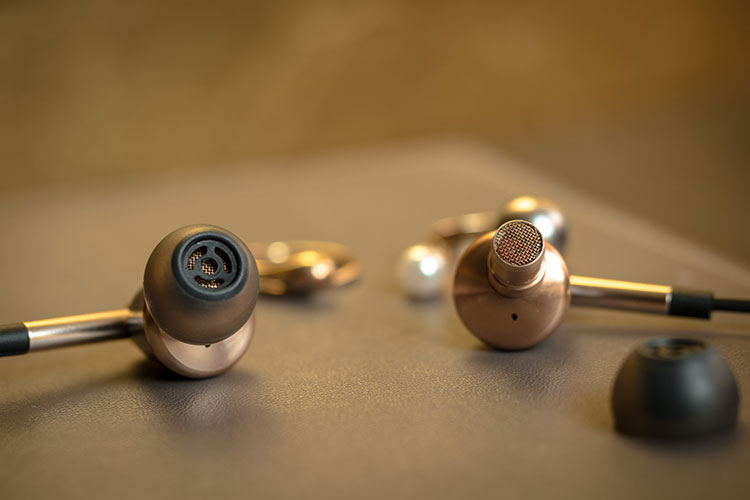 The soundstage is average to my ears. I was expecting a more expansive presentation due to the dynamic driver and the vents on the earphone’s design. The overall presentation is not as big or open as with JVC/Victor’s HA-FX7xx line of earphones or the now dated Panasonic RP-HJE900. The instruments sadly wouldn’t leave my head, but the presentation isn’t forward either. Intimacy is portrayed well, but a respective distance to the listener is always kept.

In regards to imaging, it is not as exact as I am used to from reference monitors. Sometimes I feel like an instrument in the orchestra shifts on an axis and wobbles a bit left and right. I also wish the soundstage had the better distinction of layers. It’s not completely muddled, though, I am just meticulous.

Due to the tuning, the E1001 is not the kind of earphone that throws details into your face. All the critical frequencies for subjective resolution are recessed. Do not let that fool you, however. The BA receivers are no slouches and they move very quickly. The attentive listener can pick up many small details in recordings. It still cannot match the clarity of the once famed single-BA Audéo PFE 121, but for that it features a much fuller body and a more complete frequency range. I straightened the frequency response with an equalizer and it helped greatly to uncover some instruments that were playing in the background. Trying to separate individual singers from a choir is not an easy task, but the E1001 did considerably well.

Along with the E1001, 1More sent me the dual-driver hybrid EO323 for review. These are definitely not far off from the E1001 and there are a lot of similarities in product design and sound quality. In fact, large parts of the triple-driver review could be used unedited for the dual-driver. Thus I decided not to write a separate review but make this comparison more detailed.

With all the similarities in design, I was surprised to see that the packaging is not the same. It is still very impressive and feels premium, but it feels less like unwrapping a present or opening a book. 1More saved a bit on materials, too. 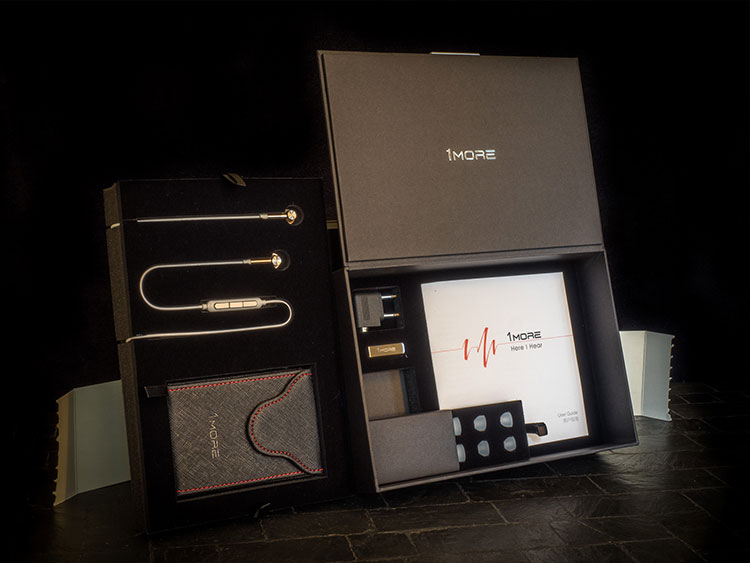 Though accessories mostly are the same (adapter, shirt clip, transport case), the ear tips aren’t. For one, the dual-driver only comes in white so the ear tips are matched accordingly. Second, the nozzle of the EO323 is smaller than that of the E1001 so the tips aren’t exchangeable. 4 sizes will have to do and foamies are not included.

The earphones’ design (except for a smaller auditory canal) is identical. Even the bass ports are taken over. The dual-driver also matches metal with plastic, but interesting to see is that the middle part is metal whereas this part was plastic on the triple-driver. In exchange, the inner side and nozzle are made of plastic instead of metal as with the bigger brother. Except for the color, the cable is identical too, including remote and mic.

So where do they differentiate sonically? While I’d attest a mild and smooth v-shape to the E1001, I’d describe the EO323 as the stronger balanced in-ear. Bass quantity is increased quite a bit, adding a handful boom and bottom. The extension is not improved, though. The bass on the E1001 is clearer with better texture and more linear.

Mids are much more colored on the dual-driver. The 4 kHz area is too pronounced for my personal taste, resulting in some unwanted edginess and shouting vocals. Treble is strikingly similar. Apart from the edgy lower treble, the dual-driver lacks the sparkle of the triple-driver but still has the same fuzziness and awkward timbre that I described earlier.

Unfortunately, I made it sound like 1More’s dual-driver EO323 is a bad performer. However, this is definitely not the case! It is simply outperformed by it’s biggest brother. As of now, the dual-driver can be found for only half the price of the triple-driver and that makes an even crazier price-performance-ratio! It is a great stepping stone for people that want to get into in-ear headphones, but if you’re serious about high-fidelity, you will replace them sooner as the triple-drivers. 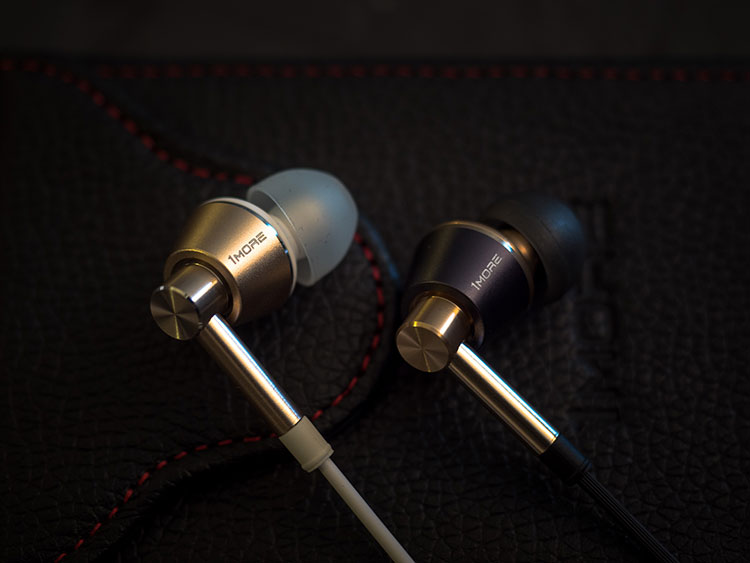 Marcus reviewed the Shozy Zero (https://headfonics.com/2016/07/the-zero-iem-by-shozy/) and concluded that the Zero is easily among the best 3 $50 budget IEMs. The audiophile community hyped it even a bit more than that.

When put next to either 1More’s triple-driver or dual-driver, the Shozy simply has nothing to offer in terms of packaging or accessories. The Zero simply screams budget and borders DIY-territory. It tries to impress with rosewood body, Y-split, and termination but simply cannot match the premium finish of the mass-produced E1001. Not to mention it lacks a remote and mic on the highly microphonic cable.

As for sound, it gets a bit more challenging. The Zero’s weakness lies in the treble. It simply overdoes sibilance and definition and causes a lot of fatigue. The bass is overly motivated stomping on some tracks. Mids are a bit crunchy and colored to a similar degree as the EO323. The triple-driver has the more enjoyable tuning and better timbre most of the time. On some tracks I preferred the Zero, though, as it has one main advantage – it sounds crisper and airier, but the Zero also forces me to lower the volume at the same time. Shozy does manage to beat 1More in dynamics and imaging. Other than that, I’d rate the overall performance of the E1001 as better.

Simply put, the triple-driver E1001 is not the earphone to improve much from more expensive audio sources. Among all the positives, I also criticized clarity and imaging. However, they would not improve with anything I plugged them into. A clean 0.1 ohms output didn’t change the tuning and a Chord Hugo wouldn’t add air or definition to the treble. It’s a stellar performer that’s easy to drive and simply worked best for me with an iPhone or similar. 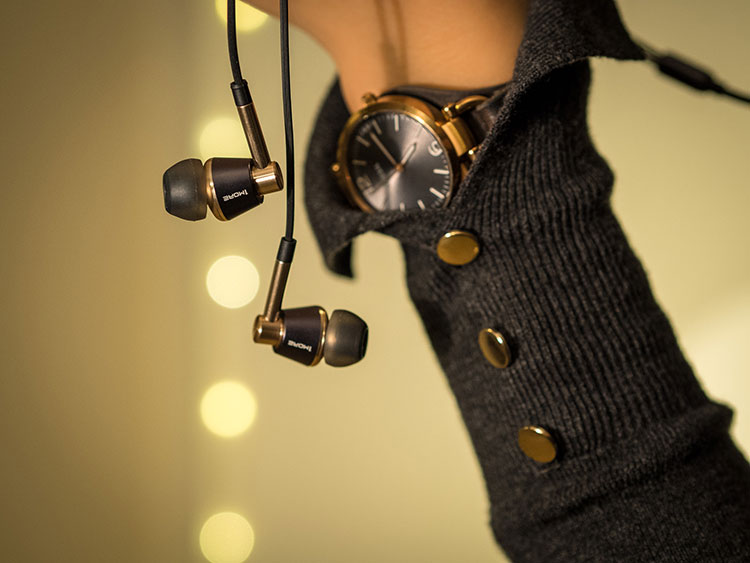 I have been very harsh on the E1001 in this review. I tend to forget that even though it’s a company’s flagship, they’re still budget priced IEM. When I see them on the table laying around, I just think what a gorgeous set of earphones they are. I pick them up and they feel great in the hands too. I just want them to be perfect! And probably they come too close, that’s why I am nitpicking a lot. All my criticism is arguably invalid considering the asked price.

Even all criticism considered, these earphones absolutely shine with Pop music. It’s a great tuning that is not neutral but engaging and awfully fun most of the time, yet not colored enough to annoy true audiophiles. Nevertheless, I do think that a small re-tuning (lowering bass quantity, straightening mids, retuning treble) could make these an even bigger success in the audiophile community. Not to mention what would happen if they replaced the plastic part with wood…

For me, the 1E001 by 1More is the perfect set of backup earphones to always carry in your pocket. Definitely good enough to get you through the day, beautiful to look at too. Sometimes they made me think that pulling out my custom IEMs isn’t worth it, this will do just fine.