The DAC-9 lives up to its billing as a comparatively warmer DAC than the DAC-10H and whilst it doesn’t have the same level of detail as it’s bigger sibling it competes very well indeed with equal, if not more expensive, DAC’s for detail and musicality. This is a “fun” DAC with a forgiving signature but still plenty of clarity particularly in the lower treble where the AKM chip shows it’s superiority in detail over chips such as Wolfson’s WM range which tend to smooth out the treble even more and produce a little less in terms of dynamic range.

Bass performance is slightly more neutral than Wolfson WM chips but still north of neutral and slightly better sub-bass presence. It is a little more forward also than the more neutral Sabre DAC’s such as the NuPrime DAC-10 but it’s not as aggressive sounding as the Gungnir from Schiit.

The vocal performance is natural sounding, clear and sibilant free though on formidable DACs such as the Hugo and the DAC-10H that additional level of clarity and layering better-suited choir and orchestral works were vocal layering sounded more precise and detailed. The DAC-9 produced a pleasing rendition of choir work but it sounded a little too smoothed over for my liking.

Rock and pop vocals, modern genres with high range synth-happy workouts suit the DAC-9 so much better where it can display a detailed treble performance that sensibly avoids grating or any digital glare.

The pairing with the NuPrime HPA-9 amp was spot on. This is NuPrime’s twin amp that stacks ever so sweetly with the DAC-9, on top or below. Sadly, it does not take a balanced connection, something NuPrime and I spoke about and the technical setup of delivering a balanced connection into a unit that size and at that cost would not have been possible. It still has plenty of power on tap single-ended and combined with the DAC-9 it produces a natural, smooth and very musical signature that’s just perfect for rock, pop, and EDM. Less so for classical, I would still grab the DAC-10H all in one DAC and balanced amp for that. It really is worth the money for me with its excellent transparency and eye for detail. 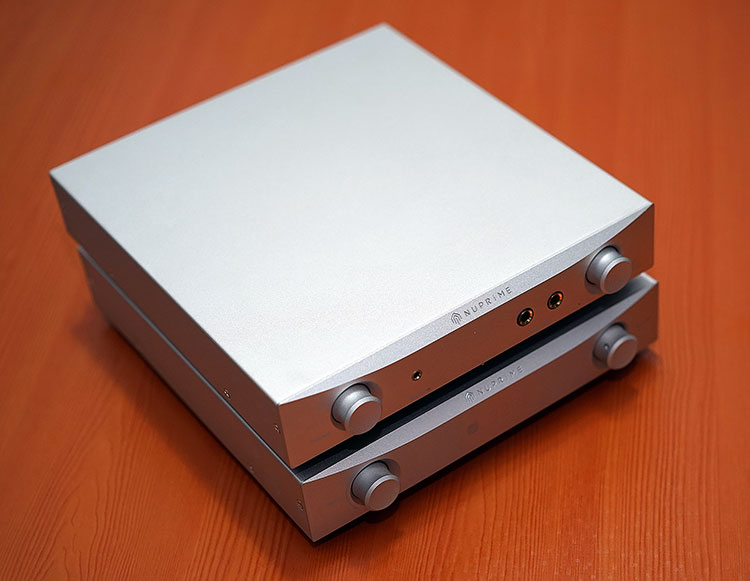 Power-wise the DAC-9/HPA-9 can easily handle planars such as the Ether C, LCD-2 and tonally treble edgy headphones such as the K812 actually behaved themselves wonderfully. In fact, so much so I used the K812 for the majority of the review combined with the HPA-9 amp for comparative listening it was that good. It is normally quite hard to find a combination that tames the treble peakiness of the K812 without losing a ton of detail but the DAC-9/HPA-9 combo did a very nice job indeed, keeping plenty of detail and allowing me to sit back and listen to the music without getting zapped by painful treble.

You don’t have to get the HPA-9 by the way. That balanced out of the DAC-9 is just begging to be paired with a balanced amp. Though aesthetically not as streamlined as the Gungnir/Mjolnir stack, the DAC-9 into the Mjolnir sounded very natural and very powerful. The aggression and dynamics of the Mjolnir are still there but the DAC-9 injects a little warmth into the Mjolnir which makes it ideal for headphones such as Hifiman’s HE6 and HE-560 which I believe always sound better connected to bone dry neutral amps. 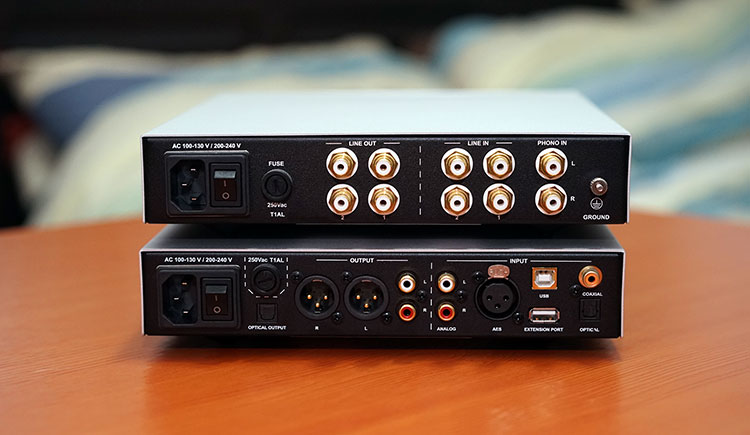 The bigger brother to the DAC-9, the DAC-10H uses a Sabre ES9018K2M chip at the heart of its DAC implementation and provides for additional inputs and outputs both digital and analog over the DAC-9. Technically it is a step on the DAC-9 and in the H variant provides an excellent amp with plenty of power that can be used in balanced or single-ended mode.

This is a very neutral clean and detailed sounding DAC but unlike say the Oppo HA-1 it doesn’t as thin or peaky in the lower treble. It lacks the lower treble Sabre glare that some DACs suffer with. It is incredibly transparent in that respect with plenty of analytical prowess for those audiophiles who like to hear a ton of detail in their recordings without any additional coloration. By comparison, the DAC-9 does indeed sound a little warmer, a little bit more musical with a more laid back sound, a slightly weightier bass response but a little less resolving by comparison. Dynamic range is just a little muted on the DAC-9 compared to the DAC-10.

My personal preference is the DAC-10H to be honest just for that additional micro detail and transparency but I do find the DAC-9 to the more forgiving of the two and plays better with a wider range of lossy recordings of which I do still have plenty.

More neutral and linear than the DAC-9 and also far more revealing and less forgiving than the DAC-9. The detail is top-notch on the Hugo DAC, if you want superlative resolution then the Chord has the edge. However, the DAC-9 trades that up a little and returns a slightly smoother sound which is a little easier on the ear at times.

Sileypud by John Barnes is an excellent example of the difference between the two in terms of detail – both are accurate with imaging, but in the background, the Hugo picks up a lot more on the quality of the recording than the DAC-9. The DAC-9 gives the impression that is has a quieter background but it’s simply missing out on the micro-detail that the Hugo yields.

Another good example is church choir music (Ave Verum Corpus by Mozart), the DAC-9 delivers a smooth choir vocal but that level of detail and neutral tone of the Hugo offers more detail, better separation, and layering; in short, you hear the distinct harmonics and multiple voices at play in the choir with the Hugo rather than a “single packed voice” that the warmer DAC-9 offers.

The DAC-9 tonally sounds the more pleasing of the two but, in the end, I would miss the details in tracks or genres like this that the Hugo can give me. On the other hand, the DAC-9’s slightly warmer tones, slightly more impactful bass, and all-round musical approach gels a lot better with classic rock such as Uriah Heap and Led Zep than the flatter sounding Hugo. 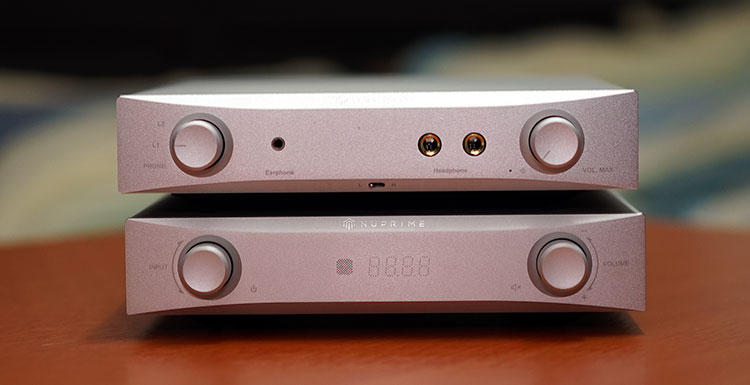 The CDM uses a Wolfson WM8741 chip and whilst it’s not technically as capable as the DAC-9 it does give a similar quality tonally with perhaps the CDM sounding a little richer than the DAC-9 but these are slim margins.

Forget DSD128 and DSD256, the CDM tops out at DSD64 which still accounts for a heck of a lot of DSD recorded material. Having said that the CDM goes the way of Schiit in that respect paying only nominal regard to DSD and aiming instead for what people actually use now and how it sounds.

Both sound very natural and organic compared to the majority of ESS implementations. If anything the DAC-9 AKM design has a slightly cleaner top end with a more prominent lower treble presence than the CDM but its slim and you really have to be looking for it. Using the HPA-9 amp, percussion on the CDM just sounded a little softer and slower than the DAC-9’s more energetic and detailed response.

The CDM purely as a DAC has some limitations that the DAC-9 can compete with such as treble clarity and it is only when you use the CDM line out or amp that it starts to come into its own as an excellent DAC/AMP.

It is getting a bit long in the tooth with the release of the multibit Gungnir v2 but I still use the Gungnir v1 and price-wise when it came out it was still in the same ballpark as the DAC-9. The Gungnir uses dual AKM4399 chips in its design, which is a 32-bit, delta-sigma D/A which was similar to those used in the Bryston BDA-2, though Schiit did not set up the Gungnir to be DSD capable. Schiit are not DSD fans by the way and even the Yggy lacks DSD compatibility. For that, you have to grab the additional Loki and even then it tops out at DSD64.

The Gungnir tonally is a more neutral and aggressive sounding DAC than the smoother DAC-9. It doesn’t have the clear pure tons of the DAC-10H and perhaps not as transparent but it’s more visceral and attention-grabbing than the DAC-9. Headphones like the LCD-2 Rev 2 benefit greatly from this livelier presentation whereas the DAC-9’s warmer approach might not get the best out of this planars darker low end and shelved-down treble. The downside is the Gungnir can fatigue a little more than the DAC-9, especially if paired with the Mjolnir which in itself is a very dynamic amp.

This is a small box made in the UK around 4-5 years ago and whilst technically it’s a bit old now it is still one of my favorite portable DACs for its dynamic range, balanced capability, and all-round fun. It slew the Rein Audio DAC and came a close second to the Gungnir last time I review it in 2012. I would classify both the uDAC and the DAC-9 as warm sounding DACs but there are differences. These differences are not immediate though, this is not a night and day experience, but over long listening periods, you can find some key differences in how the DACs deliver.

While both have a weighted low-end response the DAC-9 has the superior articulation, strong sub-bass and detail retrieval making the uDac2496 slightly more one-dimensional sounding. The dynamic range is better on the DAC-9 than the uDAC. By comparison, the uDAC sounds just ever so slightly more compressed. The DAC-9 also projects a wider soundstage and a more vivid presentation and imaging than the more center-focused uDAC.

I have to commend NuPrime for being able to migrate a lot of features present in the more expensive DAC-10H into the smaller and cheaper DAC-9. The fact they intentionally colored the DAC-9 to be slightly warmer, more musical and forgiving than the neutral and transparent DAC-10H will play well in the mid-fi market where I think a lot of audiophiles are less concerned with extracting the very last detail out of their systems and instead simply want to listen and enjoy their music at a more than competent level. It competes very well indeed in that respect and offers a wide degree of flexibility with a quality pre-amp design that pairs well with good headphone amps such as the Mjolnir and the HPA-9.

There are plenty of inputs and outputs to satisfy a wide variety of potential users be it turntable guys, digital audio guys or simply those who want a quality pre-amp into their system without paying megabucks. It’s neat and compact, fully stackable with their HPA-9 (though lacking in a fully balanced setup) and possesses enough gain in its digital volume design to produce an excellent presentation.

Ideally, I would love to see the HPA-9 and DAC-9 merged offering an integrated balanced system to compete at the same level as the DAC-10H. Something that conveys musicality in the same vein as the DAC-9 but is able to output in balanced mode to pair with headphones such as the HE6. It does not have to be cheaper than the DAC-10H but more of a ying to the DAC-10H yang. That would be some set up for those that enjoy modern rock and pop and find the DAC-10H to be a bit too ‘prim and proper’.