As far as setup recommendations, the amp was voiced with the Sennheiser HD650 in mind so that is an obvious choice. In addition, users of the MKII have reported headphones such as the AKG K702 being good to use. It may be surprising that two headphones with such opposite sound signatures can work well with the same setup, but there is a reason for it. The Bushmaster includes an earlier version of the technology that Beresford’s current flagship amp/dac called the Caiman uses that measures the frequency response of the headphone’s voice coil and then adjusts the voltage output to correct for any incorrect movement of the driver. The result is that complaints associated with the 650s such as muddy bass and lack of treble are alleviated and complaints specific to the K702s such as overly bright treble and lack of bass can be compensated for as well. As far as how the unit sounds when both the amp and dac components are in use, it’s nothing short of spectacular. To explain, I will analyze by breaking down descriptions in terms of the various parts of the frequency response. Keep in mind that this segment of the review was done using HD650s.

With the MKII, the Sennheisers extend far lower than I’ve heard on any other setup before. Various things that I have tried include the Schiit Magni, Garage1217 Project Ember and O2 with the ODAC as the DAC component. Compared to the Magni, you get more bass depth, clarity and extension. By this, I mean that instead of a sudden slight slam, you get a well rounded, resonant sound that does not without having the extremely long decay that the HD650s are prone to having. Compared to the Ember (which I found to be much faster in its bass response than the Magni), you get the same degree of speed except with a bit smoother of a delivery that ends up being more musical. While the Ember can sound either a bit rough around the edges without enough extension or too wooly depending on the tube at times, the MKII simply unceremoniously delivers a note. The bass of the MKII is very tonal in the sense that you can hear a clear bass note no matter how low — something contrary to the sensation that other amps give of hearing a low tone at some frequency without being able to hear an entirely clear pitch which aids in the musicality of the amp. This tonal aspect of the MKII is in stark contrast to the O2/ODAC pairing which I find over clinical to the extent that it works against the HD650s warm, musical characteristics. Listening to electronic music such as James Blake and nExow becomes particularly enjoyable as both highlight the visceral aspect of the MKII’s sound.

This is obviously the bread and butter of the frequency response and the MKII highlights them spectacularly. Vocals, both male and female are the best that I’ve heard with the 650s. The reason being is that the MKII has a very free sound in the sense that each component of the track is presented in its own space in the soundstage. This has a profound effect on the vocals because it allows them to exist in space over the track if that’s what the mix intends — something shown strongly when listening to artists such as Jeff Buckley where his voice is intertwined with the rest of the track in some portions and then becomes highlighted in others when he increases in volume. Female vocals occur in a very similar fashion so that contrasting voice types are extremely easy to notice. For example, a strong voice like Nina Simone or Odetta is extremely resonant and in your face while a higher softer voice such as Joanna Newsom’s floats above the mix. Guitars are a treat to listen as well because again, the variance in tones is extremely easy to notice — something like Maggot Brain is presented with guitars at the forefront with a degree of edge while something such as the glassy tones that emo artists such as American Football use are extraordinarily smooth without being dominant. Tonally, I’d say that the amp has a character that leans towards warmth and musicality (so it lacks the coldness of an O2) but doesn’t have the level of warmth that an amp featuring a tube design would possess. 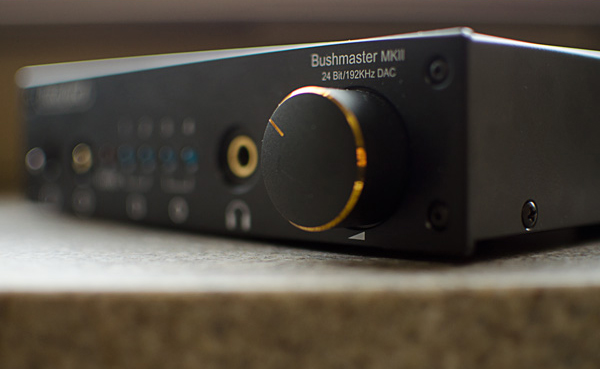 One of the most impressive parts of the MKII is its treble response. It’s very well extended, but not fatiguing except in extreme cases (i.e. listening to songs that incorporate frequency sweep sorts of sounds such as the song Dutch Flowerz by Skream). Normally, the treble sounds quite analogue — crisp and clean without extreme amounts of sparkle and with absolutely no glare that other DAC/AMP rigs such as the O2/ODAC possess. The difference in tone can possibly be attributed to the DAC using a chip different from the Sabre chip that many DACs in a similar price range (although the actual chip that the DAC uses is not published — it simply sounds nothing like any of the sabre implementations that I’ve heard). Unlike Sabre DACs that I’ve heard, the treble has absolutely no trace of grain and is delivered quite effortlessly.

For me, the greatest part of this product is the imaging and detail extraction abilities that it has. Everything is precisely placed in whatever amount of soundstage that your headphones allow. When used with the HD650s, although the soundstage is limited, the MKII provides a greater sense of space than any other combination that I’ve tried. When using the MKII as a DAC in my HE-6 rig, the experience is sublime – every inch of the headspace in which sound exists is occupied with precise location and ever place where there is silence remains that way. The beauty of this is that minimalist tracks such as certain songs by Godspeed You! Black Emperor remain low key in nature while tracks in which there is more going on as far as amount of the headspace used such as the wall of sound that occurs in many of the tracks by the doom metal band Neurosis relentlessly surround you with sound. As far as detail extraction, I don’t think it’s appropriate to speak about the amount of detail because many DACs that the MKII competes with are detailed, but the important component is clarity of detail. By that I mean the degree to which one has to focus their listening on the details in order to really hear them. The MKII is the best that I’ve heard on this front as details are extremely forward — you can hear every intentional (or unintentional) noise in the track without having to try to hear them.