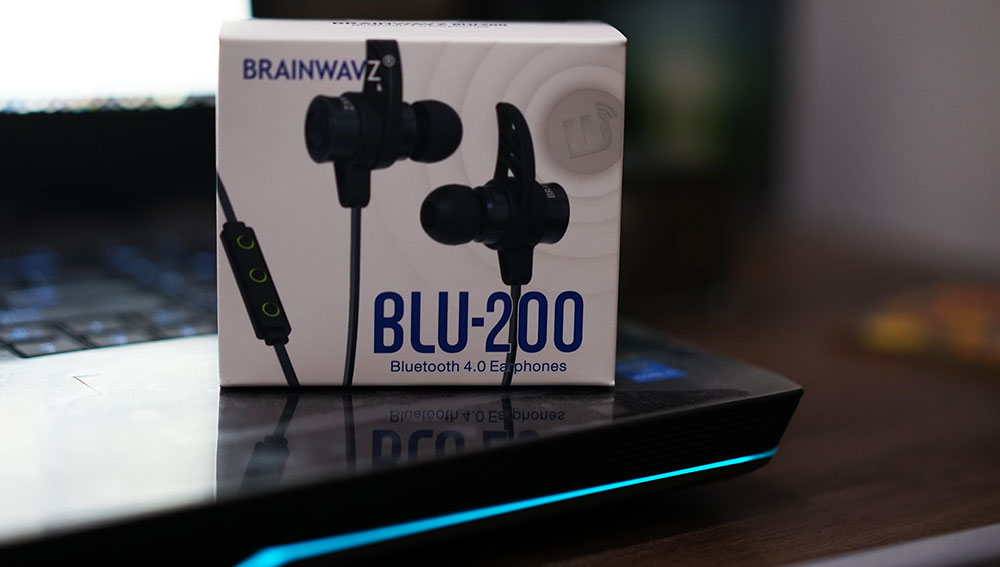 Never one to shy away from rolling out a new IEM, Brainwavz have just announced the launch of their all new BLU-200 BT IEM priced at $54.50 which is $10 more than the previously reviewed BLU-100 and to all extents and purposes the BLU-200 could be considered a bigger physical brother of the BLU-200 except that it has a slightly different frequency response. Once again, it is a Bluetooth IEM targeted for the casual on the go listener but having once crossed paths with a treadmill back in Roman times I can safely say this one is very much a gym type listening experience and for those who want to pump iron in a rhythmic fashion.

What is in the box?

It is the same little tiny cardboard box as the BLU-100 with practically the same format and the only difference is the name of the unit and the picture. Much like the BLU-100 it has a few USP’s on the box such as BT 4.0, Comply Inside, a 24-month warranty (nice touch!) and what you get inside in a handy list format on the back. For such a small box you do get a fair amount of gear in there. 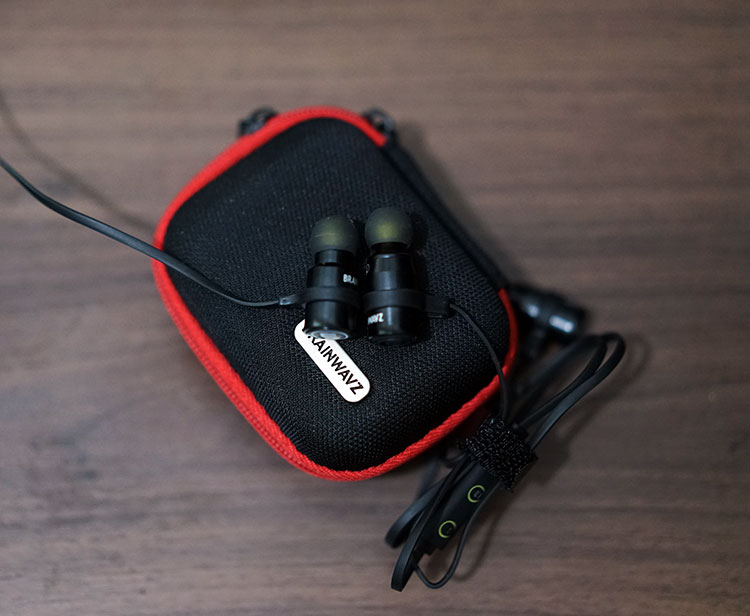 The pill box is the same pill box as the BLU-100. That is a semi hard zip pill case in red and black with the Brainwavz logo on the lower right on a metal plate. The zip pulls also have a tiny Brainwavz logo in red on each side which is a nice touch. It does the job nicely, pocketable size and will protect your BLU-200 on the go no problem. Inside the carry case is the same dual sided cloth mesh holder for your accessories and BLU-200. No long cables here to squish in since the BLU-200 sports the same type of cable as the BLU-100 and requires no jack input. You also receive a small Velcro strap to keep everything relatively tidy when not in use. 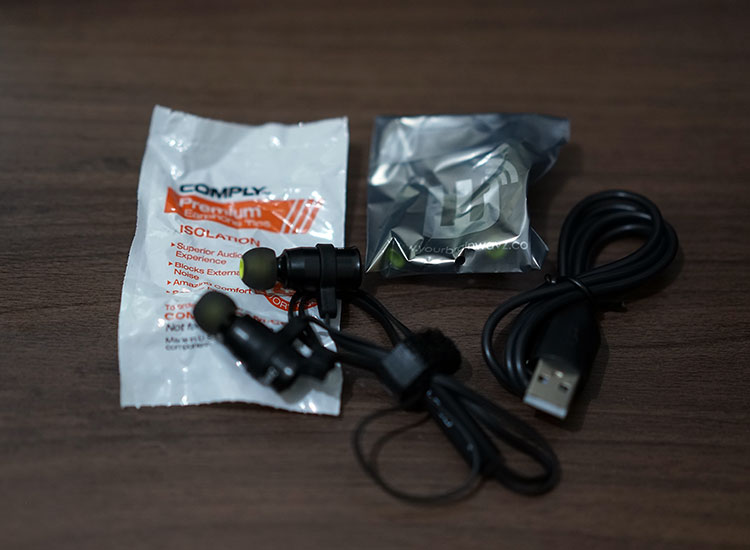 The BLU-200 also gets a pretty good smattering of accessories, much the same as the BLU-100 with a micro to USB A cable for charging your BLU-200, a set of S-400 Comply Tips and another pack of silicone tips in small, medium and large. You also get the same little ear-hooks for steadying the rather large BLU-200 in your ear during vigorous movement (that gym thing again).

The physical build in general are quite similar between the BLU-100 and the Blu-200. The BLU-200 sports that same jack free short flat cable that loops from left to right driver with the inline remote and mic and BT control unit with multi-function control. The loop design allows for wide degree in terms of freedom of movement without tangle or getting caught up which is ideal for the fitness types and generally anyone with a high degree of mobility. Strain relief is the same quality as the BLU-100 which means it’s fairly decent looking with a loop wrapping around the driver shell than the usual straight up and in type design. 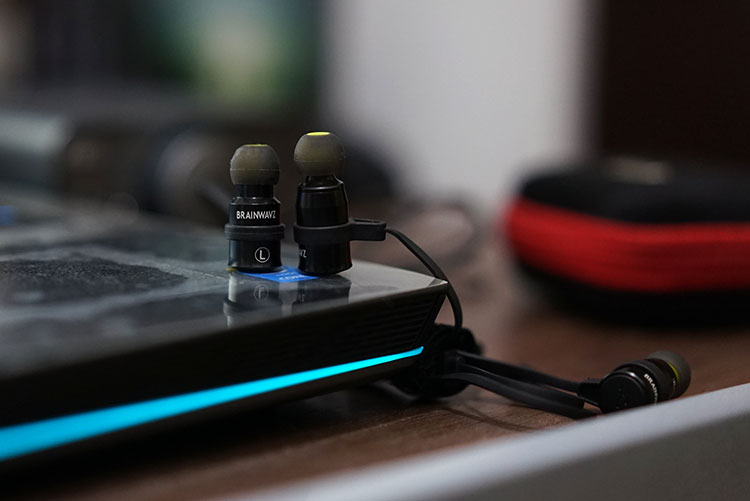 The major design difference between the BLU-100 and the BLU-200 is the actual size of the driver units with the BLU-200 driver units being considerably bigger. When you think that I actually commented on the BLU-100 being on the large side then you might get some idea of context with regard to the length of the Blu-200 because it does stick out a bit. That being said it does pack a fair bit more tech inside than the usual IEM hence its girth. This includes the USB charging port and battery under a similar rubber flap as the BLU-100 and this time a larger 9.2mm dynamic driver than the 8mm driver of the BLU-100. Charging as per the BLU-100 is via a direct USB connection to the USB port under the flap on the right driver side.

Despite their enhanced size, the BLU-200, with the additional ear hooks, has a more then a decent fit with the stock tips with little or no need to tweak for any sweet spot. They do not feel they are going to slide out at any time whether open or closed jaw or with any rapid movement (note editorial rapid movement is more in tune with stuck clock hand but that is for another time). There really is only a minute difference between the BLU-100 and BLU-200 in your ear in terms of presence but having said that this is purely contextual. Both are large and both have presence in your ear.

Isolation for such an easy fit is good but nothing spectacular. Less of an issue when the music is at full blast but the silicone tips are about 85% as effective as memory foams and hybrid tips. I wouldn’t advise memory foam tips though with the BLU-200 as the tonality is not the kind that lends itself well to foam. Again you can wear these over the ear with the loop on the back of your neck or under the chin. They can be worn over or straight down also. Just like the BLU-100 they felt a bit more comfortable straight down as the cable crept up under my chin yet they felt more secure over the ear. Take your pick, but either way the fit is solid.

The functionality is much the same as the BLU-100 so everything below is really a repeat of the BLU-100 shakedown in terms of that it can do. Again the BLU-200 continues with the excellent aptX functionality which makes a huge difference over non aptX formats in terms of distance and sound quality when paired with an aptX capable source device. Also the features are the same as the BLU-100 which is a good thing. They include: 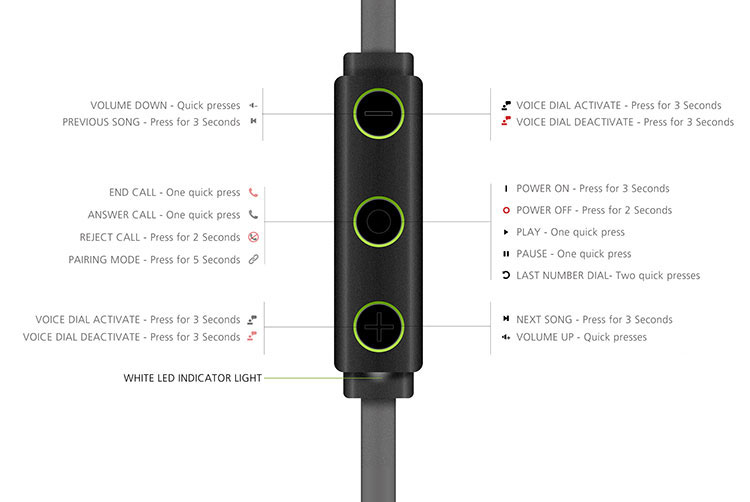 Pairing was the exact same process as the BLU-100 using a BB Passport and Sony Z Ultra as well as an iTouch (no aptX though on iOS). Simply press and hold the middle button for 3 seconds to power up or press and hold 5 seconds to power up into pairing mode. A tiny LED light at the top of the inline starts blinking and you should see it on your phone. Pairing is code free so just confirm to get them matched up. During this time you get a generic female voice state “power on” and “connecting” to validate the link.

The BLU-200 BT signal distance performs on the same level as the BLU-100 with an approximate 5-6 meters with a few walls in between which usually shorten the distance slightly due to the disruption in the signal path causes by barriers such as walls. Line of sight, if clear, should be able to give you an increase on that measurement. I got the same measure on both the BB Passport and Ultra and slightly shorter at about 3-4 meters with the weaker A2DP technology inside the Astell & Kern AK120.

During battery charge the right sided driver does still get slightly warm but not as warm as I remember the first charge of the BLU-100 getting. Charging to 100% takes around 2 hours which gives you around 3-4 hours playback time and a claimed 100 hours on standby which is pretty decent and enough for a few commutes and a work out in the gym.