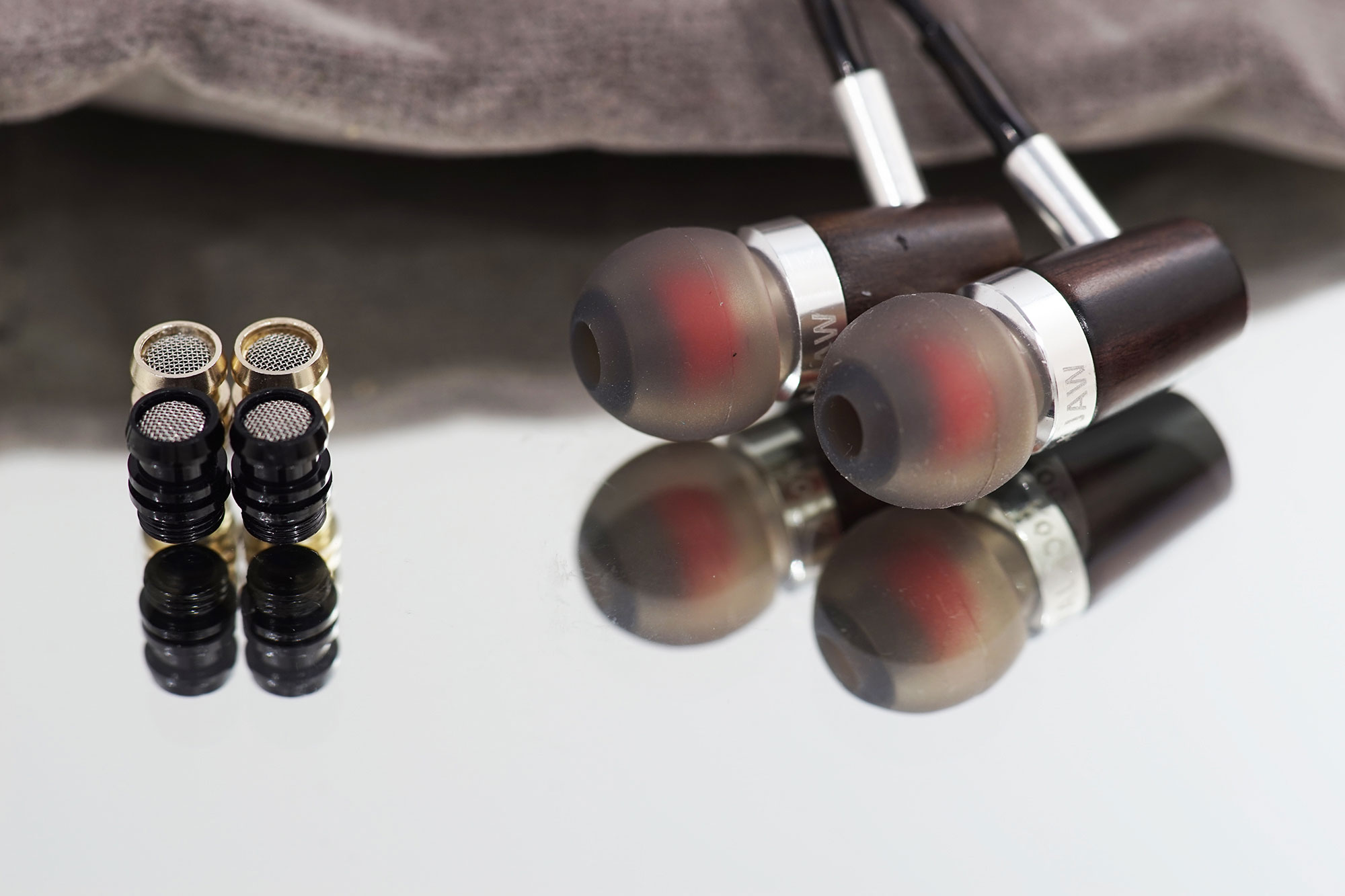 A few weeks ago we reviewed Rock Jaw’s entry level IEM, the Arcana V2 which surprised me for its modern sound with audiophile sensibilities at a dirt cheap price. Well now we are back with another slightly higher up creation called the Alfa Genus. The Alfa Genus is a single dynamic woody universal IEM much like the Arcana V2 but this time it includes an interchangeable filter system that is designed to allow you to change or alter the response of the IEM depending on the filter you use.

We have done a few of these filter system reviews before such as the high end AKG K3003 that came out in 2012 and what I have tended to notice is I always end up preferring the filter that gives me the most flexibility or the most neutral or reference response for my daily on the go uses. So far my experience has been that filters do make big changes to the sound and you WILL have a preference for one filter over the others supplied. That is not to say the others are inferior but rather they produce a very definite type of response and usually it is either predominance to the lows or a bias to the highs. Hence my preference for the one closest to neutral because most filter systems, like those naughty ‘crims’ from Kryptonite, usually come in threes.

The Alfa Genus uses the same packaging and branding concept as the Arcana V2 with its rectangular black stiffened cardboard slide box and layered foam contoured internal packaging to house the IEM itself and accompanying accessories. Having experienced the delicacies of removing the IEM from this type of packaging before with the Arcana I guess I am at veteran status now with the Alfa Genus but the usual caveat here and that is do not pull them out using the cable despite its decent strain relief. The individual left and right driver units are on other side of the foam packaging so you could end up damaging them with a hasty pull. My best tip is to just press down on the foam beside the drivers and push out one by one. The Alfa Genus, much like the Arcana comes also with a soft cloth draw string pouch, a shirt clip, a triple set of small, medium and large single bore silicone tips and of course the filters. 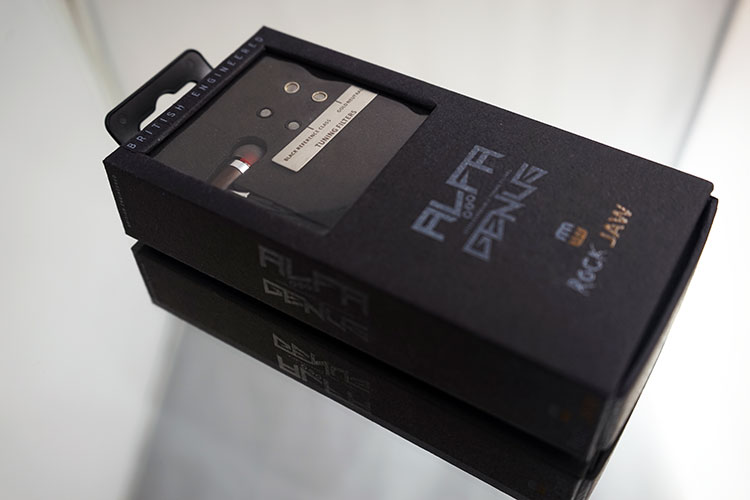 The filters are housed in the foam packaging just above a glued on metal plate which clearly states which filter is which. Note there are in total three filters (told ya!) and one of them, the silver enhanced bass, can be found already installed on the IEM’s as standard out of the box. Ironically I cannot find the correct name for the silver one as the other two which are on display in the box have their names on the metal plate so I just called it “enhanced bass” after its description on the main website. The other two are called ” Black Reference Class” and “Gold Neutral”. 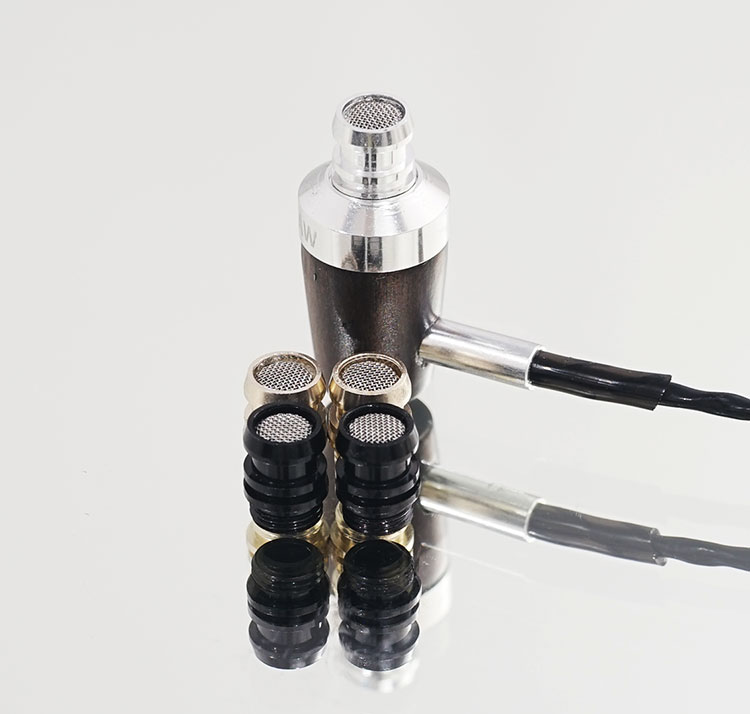 Unlike the T10i from RHA you cannot remove the metal plate and store the filters there for taking with you. That is a shame because otherwise I am searching for tiny bags to place the filters in as I have no desire to bring the retail box with me for storage purposes. Perhaps if Rock Jaw are doing further revisions on their packaging that metal plate can have a few spikes or holders for the filters and turn it into a very useful accessory.

The Alfa Genus is built much to the same standard as the Arcana V2 this time using a mix of aluminum and ebony wood which gives it a darker and more subtle tone of color to the housing than the brighter cherry wood of the Arcana v2. The Alfa Genus also follows the same well built bullet type form factor of the Arcana V2 with an 8mm neodymium dynamic driver inside and finished in aluminum accented stems. The bass port of the dynamic driver is located at the center of the aluminum rear faceplate and the filter mechanism is located on the front nozzle underneath the tips. You access the filters by simply pulling off the tips and unscrewing the filter and changing to your preferred filter and replacing the tip back on top. It can be done in a matter of seconds and requires no specialist DIY knowledge or tools.

The cable to the best of my knowledge is the same type of cable used on the Arcana V2 which is a 1.2m lighted braided cable in a rubber coated plastic sheath and terminated in a right angled gold plated 3.5mm jack. Both ends of the cable have an added rubber wrap for strain relief with the top end of the cable sliding into the aluminum accented stems for excellent protection from accidental pulls. The left cable houses the remote mic and control about half way up from the y split for use with mobile phones and gadgets. This is useful beyond simply playback and mic controls considering the Genus, much like the Arcana has barely visible left and right lettering on the aluminum stems to allow you to quickly distinguish which driver goes into which ear. All you have to do is remember the mic is on the left side and you are good to go.

The Alfa Genus comes with 4 pairs of silicone single bore tips of three different sizes (small, medium and large). They are of decent quality finished with an internal red coloring and a slight shade of grey on white. My ears where find with the medium bore tips which added negligible weight to what is already a very light set of IEM’s. Once again the fit of the Alfa Genus was excellent much like the Arcana V2 and they can be worn over the ear or straight down given the lightweight but flexible cable. I found wearing the Alfa Genus over the ear was the most secure fit as well as having the best reduction in any potential microphonics from the cable which I must add are very low indeed. The seal is pretty good but not as tight as some BA units with the bass port allowing a bit of leakage but nothing that would concern me. The seal and fit of the Alfa Genus are also a little bit more comfortable than the Fidue A71 we last reviewed which is at a similar price point and on par for leakage with the RHA MA600ias well as Rock Jaw’s own Arcana v2.