Double Helix Cables Symbiote SP V3
The Symbiote is a clear-sounding cable, with that essential hint of warmth. The thick notes and smooth treble refute any claims that a silver cable’s midrange is recessed, or that it sounds over-analytical
Slide here to add your score on the gear!23 Votes
8.5
8.5
Reader's Score
$409.99
Double Helix Cables

This Double Helix entry is part two of a four-part series of high-end cables. For the general introduction about cable performance and matching, please see the first review of the series (Rhapsodio Golden).

In each review, the scores of ‘looks’ and ‘build & design’ are weighted together in the final averaging of the score, as I find the other two scores proportionally more important.

Peter Bradstock, the man behind DHC, was first steering towards a career in science, having a background in microbiology (hence the double helix). When he needed a replacement cable for his HD650, he tried building his own and quickly realized it wasn’t half bad.

Soon after he started making cables for other members in the community, and after receiving good feedback he decided to make a run for it, since he enjoyed doing the work. As it turns out his education wasn’t for nothing, as it left its mark on his approach to cables.

Peter is a man with vision and principal, relying on measurements to take on cable non-believers and on occasion, believers alike. His main belief is that conductivity is a key factor in assessing a cable’s quality.

Conductivity is affected by the wire’s alloy, purity, and manufacturing process. Based on this reasoning, he finds that pure silver is per definition superior to copper, while taking a firm stance against mixing gold into silver alloys.

The cable world is still highly debated and refuted by many, so it doesn’t help that there are ‘snake oil’ manufacturers mixed in with the many decent ones. For this reason, Peter tries to be as transparent as possible about the materials he uses.

He also won’t shy away from challenging other manufacturers, expecting the same transparency in methods that he provides. I probably could have written a few more pages on Peter’s beliefs, if Marcus hadn’t already gone into detail in his interview with Peter here.  So in this case, I’ll just stick with the review. 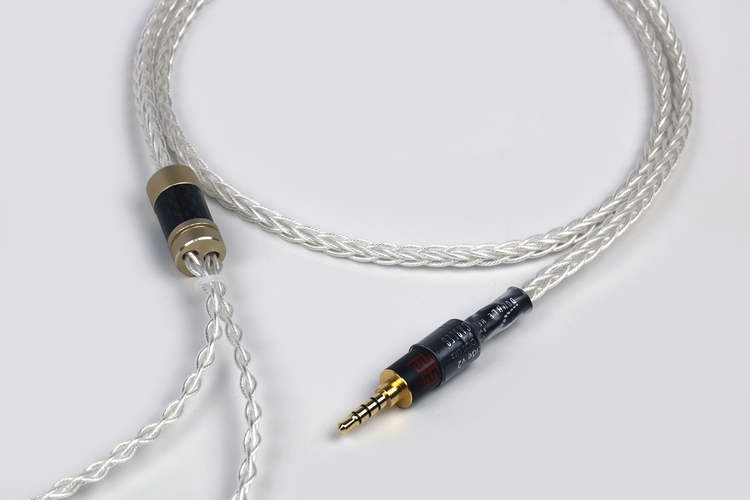 The SP cable consists of eight cores woven together in a cube-style braid. The cable has quite a beautiful clear white/silver color, with a slight glossy glare from the plastic shielding.

When you take a closer look the multiple tiny wires that make up each core are clearly visible (the Litz construction). I’m a sucker for 8-braids, so I most definitely approve; DHC’s SP looks fantastic, pretty much representing the prototype of what a silver 8-braid cable should look like.

Despite its 8 wires, the cable is very supple and doesn’t pass on any microphonics. As mentioned, DHC offers a very wide selection of customizable options. The Eidolic components are a beauty to the eye, but anyone willing can take it a step further by adding silver or rose gold plating on the components. Comes with its own price tag of course.

I settled on a mixture of black and red connectors, to match the 3.5 trrs plug. Overall, the cable has a high-quality feel to it and is built solid. As the 8 wires are heavier than a standard cable, the weight tends to press a bit on your ear. Which isn’t a problem by itself, but after an extended period of listening you can feel the imprint of the pattern of the braid.

A bit of heat shrink at the top end is an effective remedy that I’ve seen with other cables and something that I would have liked to see applied to the DHC as well, as it softens the pattern of the braid.

Somewhere along the road, silver cables got stereotyped as being ‘bright’ or ‘cold’ – as if it isn’t bad enough that people are refuting their utility and general purpose in life in the first place. While there might have been some truth in the image based on some cables, modern silver cables generally don’t tend to be as analytical as often presumed, and the Symbiote is no exception.

It has a very well balanced signature throughout the frequency range, without over- or underemphasizing any particular aspects. Instead, it can be characterized as having a clear sound, with a pleasant hint of warmth from the mid-bass that prevents it from sound cold or analytical.

The sub-bass has good punch without apparent roll-off, while the mid-bass is somewhat enhanced. The mid-bass resolution is not particularly high; there’s a slight tradeoff of definition for size.

However, the warm mid-bass aids in creating thick notes; the lower midrange gets a nice fill from the mid-bass, and the overall sound is full. The center midrange is relatively neutral without coloration, though there is an additional brightness to the upper midrange and lower treble regions.

his improves clarity and note articulation, most noticeable with a darker or warm ciem as the Solar or Warbler. On the other hand, the added brightness arguably results in a loss of tonal naturalness, although this mostly comes down to preference as well as matching.

Overall the treble is well balanced with the midrange, and not particularly enhanced as one might expect from pure silver. The Frosty Sheep’s treble, for instance, is slightly more prominent with better definition, although not as smooth as the DHC’s.

The DHC’s smooth treble enables it to pair well with treble-sensitive iems as the Galaxy and S-EM9 that are prone to a clinical or harsher tone with the wrong pairing.

DHC’s OCC Silver Litz offers a clear improvement in resolution over a stock cable; instruments are more precisely defined, and detail retrieval is higher overall. Similarly, the transparent background aids in good separation, although due to the warm mid-bass air the atmosphere is not completely clean.

Its resolution is a solid improvement over lower tier cables, though again not quite at the level of top performers as Rhapsodio’s Wizard OCC or the Wagnus Frosty Sheep. Its soundstage is quite wide and well defined, although the full bass presentation can tighten the stage in bassy tracks. 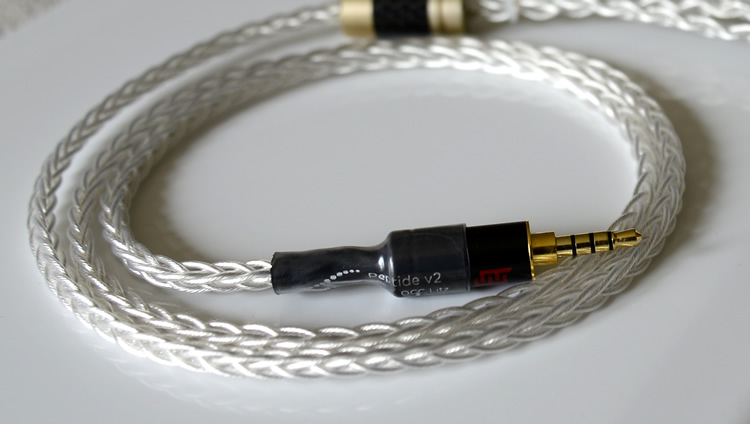 Since I tend to use the S-EM9 mostly for EDM, I traditionally pair it with a quality silver cable, focusing on clarity, separation, and detail. The DHC fits the bill, adding definition and precision, without making the treble too pronounced – the S-EM9 is quite sensitive to this as is, as the treble is slightly enhanced.

But the treble remains smooth, with the soft but punchy impact from the bass I adore. The S-EM9 sounds dynamic with a sound that balances good performance without sounding clinical, although the S-EM9’s resolution isn’t pushed to the limit. All in all a good pairing.

The Galaxy is a proper test for a cable’s tone, as the wrong pairing can make the treble sound metallic and even appear harsh in some cases (this generally tends to happen with an SPC cable); but surprisingly the DHC pulls it off.

The Galaxy has a neutral, transparent sound while its treble remains smooth without sounding clinical. The Galaxy’s midrange is on the leaner side, but the DHC does give it a nice fill. Its overall sound is neutral and smooth, and offers a good balance between tone and resolution, and can be considered an excellent alternative to the warmer standard cable (the RSD 2.98).

The Solar has a warm and smooth signature, with a slight V-shaped signature as the midrange takes a slight step back to the well powerful bass and articulate treble.

The enhanced mid-bass plays a prominent role in the presentation, giving the Solar power and a very full sound, though the warm air does come at the cost of transparency, which gives the Solar a tendency towards a darkish sound.

The pairing with the DHC most noticeably affects the midrange clarity, rather than resolution. Notes are more clearly articulated due to the pleasantly brighter sound, and the overall clarity adds a liveliness to the music, while uncovering more detail.

The Solar’s enhanced mid-bass while rhythmic, is not as detailed or well defined as with SilverFi’s IEM-R2. The pairing is dynamic, with the right amount of brightness to enhance the sound in a positive manner.

The freshly revised Zeus-R has a more balanced signature than its predecessor Zeus-XIV and is somewhat of a ciem equivalent to the DHC.

A full and clear sound, with powerful bass, thick notes, and well-balanced treble – although like the DHC, Zeus-R is not the best in class when it comes to absolute technical performance, resolution and precision in imaging, being slightly bettered by its predecessor Zeus-XIV.

The matching between the two is good; while Zeus-XIV is more of a specialist, Zeus-R (like the Symbiote) is an allround performer, and the pairing adds that bit of extra power, definition and clarity to bring it to a higher level, without affecting its versatility. 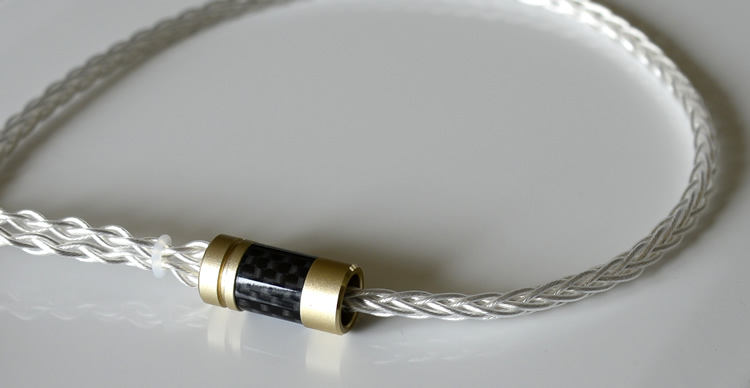 The Golden and Symbiote share key features, while again overall sounding more different than similar. They both create a full sound with thick notes and have a warmer than neutral signature. But while the Symbiote mainly gets its warmth from the mid-bass, the Golden’s midrange and atmosphere are inherently warmer.

The DHC is the clearer sounding cable, better harnessing at the Solar’s warmth, while slightly edging the Golden at midrange resolution with similar transparency, although the Golden’s treble is slightly more transparent and better defined.

The Symbiote adds light to a darker ciem and betters the Golden in such a matching. The Golden, on the other hand, adds a warm glow to a brighter iem, and can add a very special tone with the right pairing. However, the Symbiote is easy to pair and generally less picky about the combination.

When it was dark, there was light. The Symbiote is a clear sounding cable, with that essential hint of warmth. The thick notes and smooth treble refute any claims that a silver cable’s midrange is recessed, or that it sounds over-analytical.

In fact, the Symbiote with its OCC Silver Litz construction represents the true sound of a modern silver cable, with a similar overall tone as the Rhapsodio Luna, Toxic Silver Widow or Audiominor’s Prestige (to name just a few).

The DHC finds an excellent balance between tonality and resolution, and proves its all-round capabilities by being very easy to match; versatility is its strong suit. The DHC has less specific synergy requirements than either the Golden or Frosty Sheep.

Beyond that, it also doesn’t seem to have specific synergy requirements with the source, pairing equally well with warmer or brighter daps. But at the same time its excellent balance is also a compromise, as it neither excels in tone as the Rhapsodio Golden or resolution and separation as Wagnus’ Frosty Sheep.

The Symbiote V3 Silver 8-braid is a beautifully crafted with quality components and attention to detail, while DHC sets itself apart with great service as well as customization options.

With the Symbiote V3, there’s a lot to like for any type – both in sound and appearances. It’s not without reason that DHC has a strong name worldwide, with many loyal customers. DHC’s latest version of a Silver Litz OCC continues that tradition, offering an appealing sound for a very wide audience.